An Interview with VANT with Bushmill’s Whiskey Tour 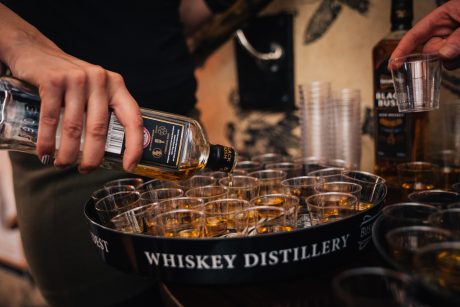 The tour will see We Are Scientists The Wytches, VANT and The Magic Gang play one-off gigs in independent venues across the UK, showcasing established bands and rising talents in a series of gigs in iconic independent music venues.

Running as part of the #AnswerTheCall campaign, the tour aims to showcase creators, artists and entrepreneurs from the music industry to showcase their talents and inspire others to fulfil their true calling.

When did you get asked to do this tour?

M: I have no idea, about 2 months ago, it’s just a one off gig. We’ve been in Manchester before but this is actually quite a small show for us, but it’s quite exciting. We played this show pretty much this time last year, we’ve since moved up to gorilla which we sold out last month, but we love coming to Manchester and deaf institute is one of our favourite small venues so the opportunity seemed like a great thing to do.

H: The crowds are great in Manchester, this gig last year was particularly mental, it was scary ‘cos the stage was all wobbly because there was so much jumping and there was a lot of energy. We’ll be taken back a year.

M: I’m sure it will be wobbly again tonight.

Photography by Dom Martin- VANT at the Deaf Institute

M: anywhere in Holland is great really, its always fun- Bristol’s always fun too. Most of the UK has been great for us recently so we’ve chipped away and now were getting the reward.

Would you say you have fans in lots of other countries then?

M: in the Netherlands yeah and now were starting to slowly spread out through Europe. It’s hard to gage, but I suppose its getting easier in a way now though statistics on the internet, but until you actually go there and play to a packed out room you don’t really know how your gonna do.

When was the first time you gigged outside of the UK?

M: it was last year, we played a couple of one off things, and we supported royal blood

H: We did Cologne and Hamburg that same year

M: It’s all a bit of a blur now to be honest, it’s a good memory test this.

What was it like the first time outside of the UK?

M: The same as here but slightly different, it was exciting, getting all around the world is one of the main privileges of being in the band. You get the opportunity to go and see places that you might not otherwise see, so it’s definitely one of the perks.

What kind of gigs did you do last year?

H: We did a lot of festivals, Japan’s fuji rocks was amazing we loved it.

M: We supported You Me At Six, but we had some really fun one off shows with Biffy Clyro and Catfish and the Bottlemen at Castlefield bowl. 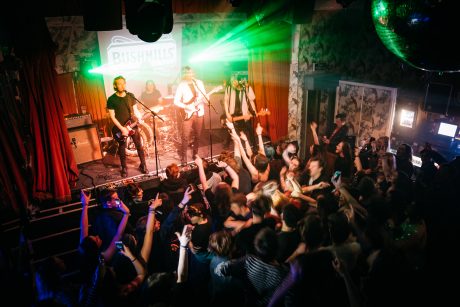 Photography by Dom Martin- VANT playing at the Deaf Institute

When did the band form?

H: it was Mattie’s thing initially.

How did you meet?

M: I feel like we should be having a cup of tea here, this is a very interesting style of interview. It’s very casual I like it… We met working in a cocktail bar in London in the hip and trendy east end.

How did you end up in London at the same time?

H: it was one of those things that just happened, I met Matty and he asked me to do some guitar and stuff and it escalated from there.

M: the bar is still there but we don’t know any one that works there anymore, it will never be what it was.

Has music always been something you were interested in?

H: We’ve all done it for years

M: This has somewhat been the ultimate payoff for us being in this band. When you kind of struggle doing menial tasks and jobs to try and scrape by and to be able to do this after putting all of your spare time into it, it paid off eventually.

When did you realise that it had paid off?

M: when we got signed and we didn’t have to do our jobs anymore. It just came from complete obscurity.

Did you play lots of gigs before being signed?

M: it was almost pure coincidence; it was a nice way of doing things

Did the label come to you then?

M: we found our ways into the hands of a couple of execs there and they loved us, put an offer in and the rest is history.

What are your plans for this year?

H: we’re gonna write some songs and try and crack on with the second record.

Have you got any festivals lined up this year?

M: mainly a lot of European ones and in the Netherlands again. New York, Chicago to name a few.

How has the album done so far?

M: it’s been out almost two, nearly three months now; it’s like trying to remember when your baby was born. The reception has been nice.

Do you have personal favourite tracks, and if so, why?

H: Yes, but although I say that, it changes all the time because you love every one of them for different reasons. At the moment, I’d say ‘Time and Money’ is a favourite.

Which get the best reception live?

H: it’s amazing to see them all go down well and get amazing reactions from songs that we haven’t played live before.

I draw the interview to a close, or more so, Mattie does as he comments…

M: Jesus how many f**king more questions have you got?!