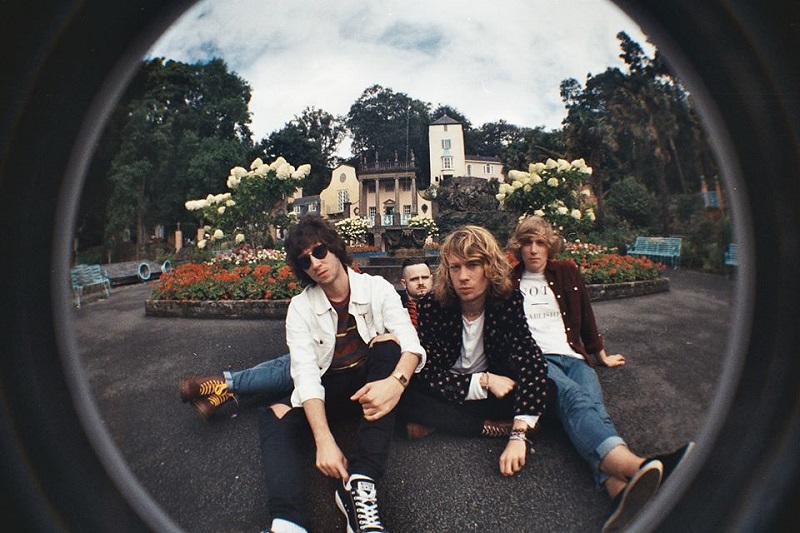 Sid, Jake, James and Ryan recently surprised fans when they announced that they’d be changing their name from the Gramotones to Cupids. The reaction was a combination of excitement, at what this meant for the talented four-piece, and confusion as to why a much loved band would rock a seemingly stable boat.

In a recent radio interview Sid and Jake explained that, for the band, the name change is synonymous with a refreshing shift in their sound. The band’s sound naturally progressed into something quite different from their original style. As they moved away from their old sound it felt right to leave the name behind too.

The Oldham four-piece are a band with a lot to say about the music industry, and about life in general. Cupids aim to make music which feels right to them creatively, as opposed to merely delivering something they’re told people might like. The band are still very much together and are currently preparing to take on their biggest national tour to date. The future seems inevitably bright.

VIVA caught up with Sid and Ryan at the beautiful Festival No. 6 to talk touring, new music and head-stroking.

Tell us about the name change.

Sid: Well, we were the Gramotones and we just felt it didn’t really represent us anymore. It had gotten a bit stale, needed a bit of a kick up the… and we just thought it was the right time. We wanted to do it for ages really, but people kept saying ‘oh just keep doing what you’re doing and you’ll be fine’. Then it just got to a point where we felt like we needed a fresh start, the music wasn’t sounding the same as it was – new sound, new look and just different personalities.

Where did the name Cupids come from?

Sid: It came from us driving home from the studio, it was like four in the morning or something and we’d been in the studio for two weeks recording some new stuff. We decided we were gonna change the name then.  We were looking for a name and it was doing our heads in. And Jake just said ‘what about Cupids?’ and it kinda came back a few days later. There were some names thrown about that cannot be mentioned, there was a lot.

Ryan: There was 300 names, that’s no exaggeration.

How does the Cupids sound differ from the Gramotones?

Sid: I think we’d been tarnished with a bit of a 60’s brush with the Gramotones, with the name and stuff. Lyrically, we wanted to say a lot more.

Sid: The sounds a bit heavier and more rhythmic based.

Ryan: Yeah, a lot of rhythm, which is good.

Sid: You know, we wanna make people dance a bit more and stuff like that. It was quite airy fairy before, now it’s kinda like…

Ryan: I think it’s got a set of balls this time.

Who are Cupids musical influences?

Sid: No, c’mon what are we listening to? Ryan’s big into the Gorillaz stuff.

Ryan: Yeah, I’m back into the Gorillaz – Demon Days and Plastic Beach. I really like them, and I’ve been listening to Radiohead again. The two together is a really bad combination though cos you just end up going west.

Sid: I’ve gone Nirvana, Sonic Youth, Dinosaur Jr. and just all that really s*** stuff that no one really likes.

Which new bands are Cupids into?

Sid: And obviously bands like Blossoms, they’re doing really well. It’s good to see someone can actually make it still. And they’ve been signed now, which is good. Erm, who else, there’s quite a few. Ethan and the Reformations, they’re good.

As musicians how do you feel about the whole ‘Madchester’ scene and all the nostalgia associated with it?

Sid: I love what it was. I don’t particularly like what it’s created because there’s a lot of Liam Gallagher’s walking about in town now. It’s a bit cringy. I think that’s what the music industry thinks about Manchester now. When really if you look into it, it’s nothing like that.

Do you think that’s a bad thing then?

Sid: I don’t think the history of Manchester is a bad thing at all. We’ve done so much. But, there are a lot of people in Manchester who need to move on and stop living off its own ego. I think you have to sift through. There’s a lot of bands in Manchester, and there’s a lots of different stuff going on that people don’t know about.

Sid: I think it’s about to move on, definitely.

Ryan: Yeah it needs to as well. But I think people have to want to move on, that’s the main thing.

How do you feel that the music industry has change since then?

Ryan: The Smiths aren’t around anymore, which is disappointing. I really like The Smiths.

Sid: Basically, you can’t just be a decent musician anymore. You have to be a social media whizz kid.

Ryan: Back then you could take a s*** load of drugs and smash places up, and just have a really good time. Unfortunately, you’re not allowed to do that anymore because there’s a lot more expected out of you as a person. I think that definitely has an effect on the music. Back then, you could get absolutely wasted and turn up and play a gig. Now, you can’t really do that.

Sid: There’s a lot of who you know. Which is fine – it’s always been like that. But, for the working class band to come through, like Happy Mondays and bands like that, it’s a lot harder because there’s not as much risk being taken on bands like us. So we have to work even harder.

A: Yeah, you have to give it to Tony Wilson – he took risks.

Ryan: I liked him on Pop Idol.

A: I’d like to stroke his hair. Tell us about the tour.

Sid: The tour we cannot wait for.

Sid: We rehearsed for the first time the other day. It didn’t go too well, so we all went home. And what we’re gonna do is pretend it’s not happening until the 30th September when we’ll all get together.

Ryan: We’ll be saying we’ve not got any merch, who’s got the van? Who’s got money for fuel? But the tour’s gonna be good, I’m really looking forward to it because I’m really nervous.

Sid: I’m just excited. I mean, we always have a really good time.

Ryan: And Blossoms too – getting to know them.

Sid: And doing our own first shows as Cupids.

You’re headlining the majority aren’t you?

Sid: Yeah, they’re our own nights most of them. We’re doing seven with Blossoms then the rest are our own. We just can’t wait, it’s gonna be good. We’re gonna change a lot through the tour and stuff. Then we end on The Ritz which is the last night of the tour, it’s gonna be decent.

Sid: The Apollo would be one of mine, and I’d like to do The Albert Hall. Out of town, Glastonbury’s always a dream. Just anywhere where people are singing our songs back to us. Could be anywhere. Could be a toilet.

How about the Hall of Mirrors in Blackpool?

Sid: Yeah bring that back.

Watching you perform is really interesting. You’re not like any other band. I love the way you mix it up and swap instruments between yourselves. That’s really unique. Who do you like watching perform? What’s been your favourite gig to date?

Sid: I saw British Sea Power at Academy 3 when I was very young. And I love British Sea Power – that was good. But it’s not the best gig I’ve been to. Hard question, what’s yours – you really liked Artic Monkeys didn’t you?

Ryan: Yeah but it’s kind of expected of Artic Monkeys to be absolutely amazing all of the time. And I think for that reason they’re very underrated.

Sid: Tell you who I liked, who you liked as well – we’d played Great Escape, we were all very tired, hungover and sleepy. We went to watch Blossoms as well on that night. We got there and Bill Ryder-Jones was playing in this church. And we all sat down…

Ryan: This church was a beautiful place. And we just knew. I’m a massive fan of Bill Ryder-Jones. It was just the best gig I’ve ever been to.

Ryan: Yeah, we were just in that mood. He came out and played loads of new stuff.

Ryan: He just played pure honest music, which is why I like him anyway. But it was just so honest.

Ryan: Yeah, and then we just went off into the night.

More details about Cupids tour can be found http://www.cupidsband.com