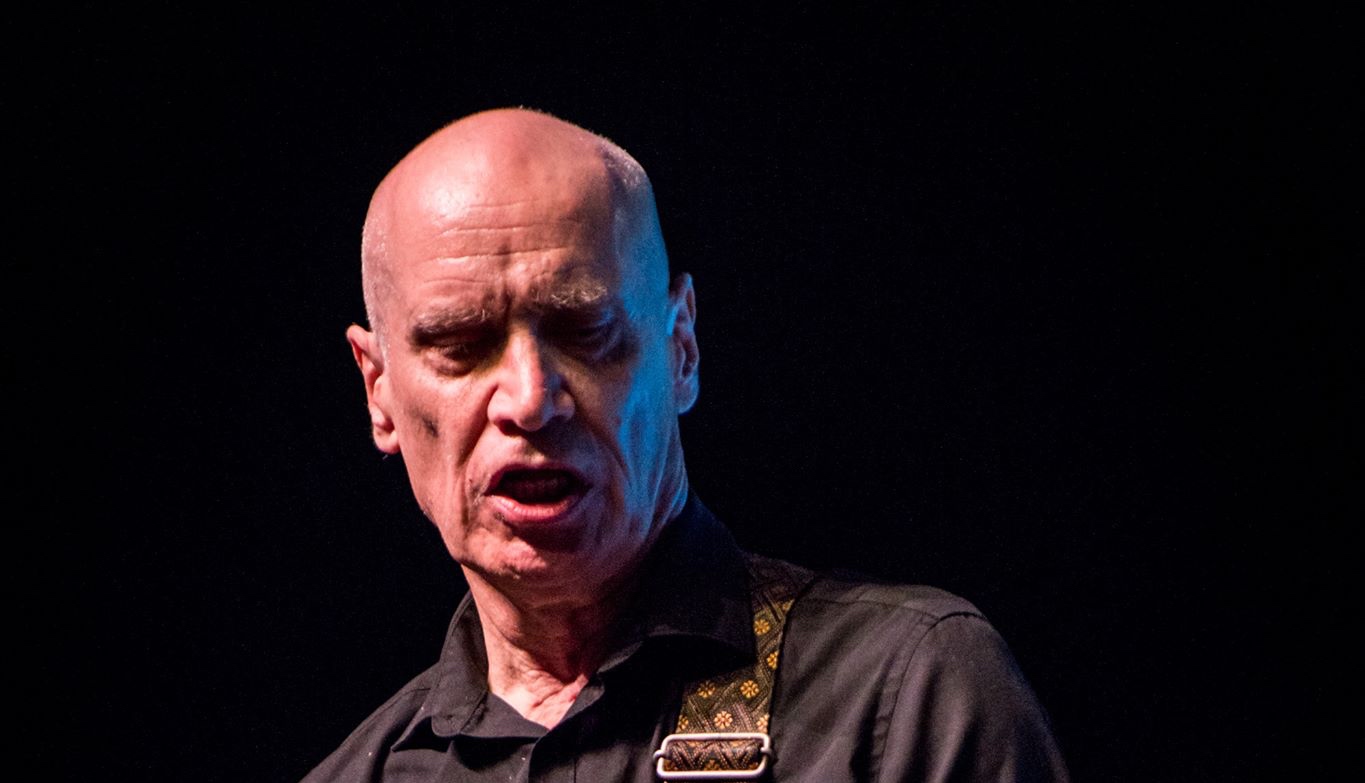 Wilko Johnson is arguably one of the most unique and exciting guitarists this country has ever produced. He began his career back in the 1970s as one quarter of Dr Feelgood, mainstays of the pub rock genre that would pave the way for the punk revolution, before enjoying success with Ian Dury & The Blockheads and his own Wilko Johnson Band. After beating the odds and conquering a bout of pancreatic cancer doctors believed would be terminal, he’s back on the road touring his new album. It’s called Blow Your Mind, and it’s guaranteed to do just that.

How does it feel to be touring again?

I’m very glad to be back on the road. We’ve just done a run in Finland. We had about two months off before that, but if I have too much time off I just sit at home moping. I am a miserable so-and-so, so moping is kind of my default position. Getting out on the road and playing is what I like to do, so I’m looking forward to doing these English gigs.

Talk me through the band you’ll be performing with.

I’ll be with my band of many years standing: Norman Watt-Roy on the bass and Dylan Howe on the drums. I was in the Blockheads with Norman, and Dylan is actually also an ex-Blockhead – I recruit all my people from that band! Dylan was in the group long after I left, but I knew him through knowing the group. But I’ll tell you what, he’s the best drummer I’ve ever had. He’s so good I had to steal him from the Blockheads!

Hugh Cornwell is also coming on tour with you. Will you be playing any songs together?

I first knew Hugh back in the seventies when I was in Dr Feelgood and he was in The Stranglers, so it all kind of fits. But I’ve no idea what’s going to happen. I’ve had two months off, so first I’ve got to see if I can remember how to play!

I read somewhere online that you’ve still got the original Fender Telecaster that you used to play with Dr Feelgood back in the day. Will you be taking that guitar on tour with you?

The guitar I use on stage now is an official Wilko Johnson Telecaster made by Fender. They did me this honour – and about bloody time too – of issuing this limited-edition guitar a few years ago, so I use one of them. I still have all my old guitars, but the one I used with Dr Feelgood lives under the stairs now.

What can fans expect from the upcoming Manchester show?

It’s the same old thing – I’ll guarantee them that! Some new songs, of course, because we have a new album coming out very soon so we’ll be doing some material from that. The new songs all went down very well in Finland. But don’t worry – there’s nothing experimental, nothing weird, just straightforward “one-two-three-four!”

When can we expect this new album?

We recorded it in November, so it should be very soon. It’s called Blow Your Mind, and it should be in your face before you know it.

How did you find the writing and recording process?

The last thing I did was the album with Roger Daltrey [2014’s Going Back Home]. That was very peculiar because I was actually dying at that point, so I wasn’t expecting even to see that album released. It was all a bit weird, the thought process of “Wow, I’m writing an album with Roger Daltrey… and now I’m gonna die!” But this album follows on in many ways from that one. It’s the same musicians – my band plus Steve Weston on the harmonica and Mick Talbot on the keyboard – the same producer, Dave Eringa… and we did it the same way, which was to go in the studio, play like fury and do it all in a week or two. I think it’s come out really well, and people who’ve heard it have said it’s very good. As I said, it’s the same old thing… but new.

Your recovery from cancer was remarkable. Does performing feel different at all now that you’ve been through what you have?

My whole attitude to life is different now. I should’ve been dead three years ago. One of the things I found when I was ill and we did a few farewell gigs was that it was just great to be on stage playing. There was a feeling that I didn’t have any future and I was about to come to the end, so I could just go on stage and play. Nothing else mattered, I had nothing to prove. I could just play, and I got so much pleasure from that. It made me realise just how much of a kick I get out of it.

Last year, you celebrated your 70th birthday and your band’s 30th anniversary with a huge concert at the Royal Albert Hall – how was that?

It was absolutely brilliant! It was just after my recovery from cancer. Before I had the operation, I didn’t know if I’d ever be fit enough to play again, but after about a year I managed to get back on stage. Then there was the realisation that people still wanted to come and see us play and got so much pleasure from it. And then that all culminated in a gig at the Albert Hall. And it was a great gig. The place was full up and we put on a really great show. There was us, John Cooper Clarke, Benjamin Tehoval and Eight Rounds Rapid. It went down really well. I’d played there once supporting The Who and once with John Otway many years ago, but this was the first time I’d done my own show there.

.@WilkoJohnson is back with ‘Blow Your Mind’, His First Album Of New Material In 30 Years! https://t.co/O0B5YazpDW

Looking back on over 40 years in music, is there a particular time that stands out as a highlight?

I think right now, actually. Like I said, I should’ve been dead three years ago, so I’m definitely happiest right now. All that old stuff I did years ago – forget it!

Aside from music, you did a bit of acting a few years ago…

Of course, I was on Game of Thrones! In my old age, my career is expanding in all sorts of ways. I was actually talking to John Cooper Clarke recently, and he told me he’d been in America. He’d been talking to some people about Game of Thrones and he remarked that he knew me. These people went: “What! Does he play the guitar as well?” They just think of me as the guy who cut Sean Bean’s head off, but I can strum a guitar as well as swing a battle-axe!

What are your plans for after the tour then?

I don’t really know. I live in the minute. I never know what we’re doing or where we’re going. But I know we’ll be doing some gigs around Europe, and summer’s coming too so we’ll be doing some festivals, and then we’ll probably be touring Japan. We usually tour there once a year, so after the summer it’ll be time to go back.

I love Japan so much. I think I’ve been there about 35 times – about 30 times touring and five times just going over there to have a good time. We’ve got a lot of friends there, and the Japanese are a great audience for rock and roll.

Any messages for the people of Manchester before you play here next month?

Wilko Johnson and his band come to Manchester Academy on Saturday 12th May. With a support line-up of Hugh Cornwell, Mike Sweeney & The Salford Jets and Mollie Marriott, it’s one not to miss! 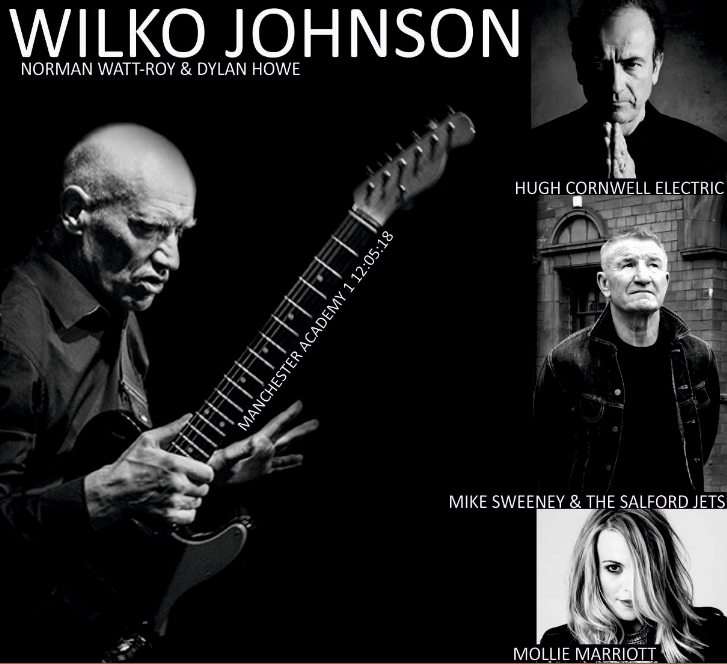