Summer is here and with it arrives the annual stream of social media holiday pics making you wish you were anywhere but work.

Fear not, whether you’re a little strapped for cash, used all of your holiday allowance or simply haven’t got around to booking something, these 10 weekend break destinations all within two hours of the UK and with flights and hotel cost as little as £227 per person for a two night break.

The deals include travel from a Friday to a Sunday for the August Bank Holiday and the average cost of a hotel in the city centre with the cheapest options for a last-minute break away from work in the summer sun.

Berlin is the place to pick for a bank holiday weekend away on a budget, with a hotel for two nights costing an average of just £172 and a return flight for two for £282, resulting in a total cost of £454 and just £227 per person.

Just a short hop over the Irish Sea, Dublin is the next best option, with and a weekend for two costing just £233 per person!

Brussels is also very affordable coming in at just £246 per person Prague, Edinburgh, Paris and Oslo can all also be done for the August bank holiday on a budget of less than £300 per person!

Amsterdam and Copenhagen will set you back £313 and £327 per person respectively, but for those that really want to go big, a weekend in the millionaire’s playground of Monte Carlo would cost £560 per person. Pretty reasonable considering. 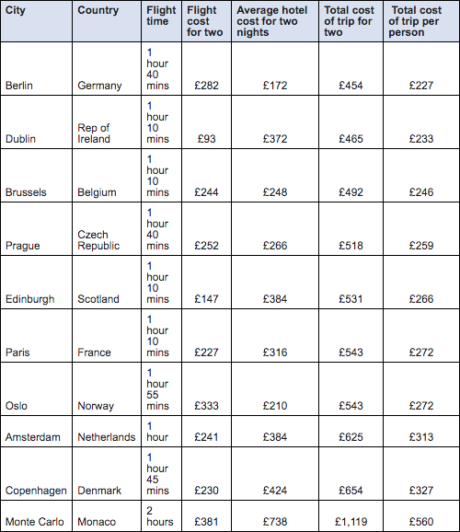 The deals collected by Cuckooz include the average cost of a hotel per night the city centre multiplied by two with flight and train data sourced from Skyscanner and Train Line between the dates of Friday 23rd and Sunday 25th August.