Perfection. That’s what The Hunna bring to the stage. Every. Single. Song.

You could easily be fooled into thinking they were miming at the 02 Apollo; they were that close to their record sound. If it wasn’t for their bursting neck veins and sweaty hair flicks.

If The Hunna aren’t a part of your daily conversations, then why not?

They blew onto the Indie and Rock scenes with their debut album ‘100’ and took charge of the rock ‘n’ roll reins; going from strength to strength. 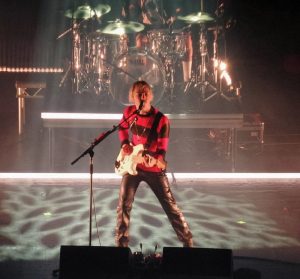 They’ve played sell-out show after sell-out show and after last night’s gig it’s no surprise why; only adding the the anticipation for the next album ‘Dare’, due to come in March.

Two support bands played before The Hunna could bring their guitar driven music though.

Coasts and Night Riots were stylistically similar to each other, but with Night Riots tipping the bar on showmanship. They also had a tinge of 80s gothic rock about them too- similar to The Cure.

Night Riots are a Californian quintet with an interesting juxtaposition in their songs with gloomy melancholic lyrics hidden in an upbeat alternate rock easy to dance to.

Around the halfway point of their set the drums took centre stage, which was refreshing and visually awesome, with all band members grabbing light up drum sticks and getting on a drum.

It was a dramatic moment that had audience members whipping out their phones.

Coasts were next up and were met with moshing and high pitch squeals.

They danced, they played, they conquered. They played stadium worthy songs with the likes of ‘Ocean’ and ‘Modern Love’ and the bassist didn’t seem to stop smiling.

Their songs are littered with beautiful imagery in simile and metaphor that offer a sense of escapism.

They are also joining The Hunna on their tour of Australia and the US later on this year and are sure to be loved  if they perform with same amount of passion and energy.

Then came The Hunna. They opened with a new single ‘Summer’- a great choice. It’s fresh, catchier than the flu and had everyone going nuts.

Everything from the staging, to the band, to the set list was on-point.

Inventive lighting reflected the mood of each song too.

The stage was framed by colour changing lines of light, with lights coming in from the sides too, creating all kinds of hypnotic geometric web-like shapes.

‘Still Got Blood’ and ‘We Could Be’ followed. Then a “Holy F**ck” from frontman Ryan Potter.

He went on to say how Manchester feels like coming home as they have family here. Three quarters of the band also supports Manchester United, which was met with cheers and booing, as expected.

They notched up the heavy with a new track from ‘Dare’ and then a time-out for the band, with drummer Jack Metcalfe patting himself down with a towel, whilst Potter’s vocal triumphed on ‘Sycamore Tree’. 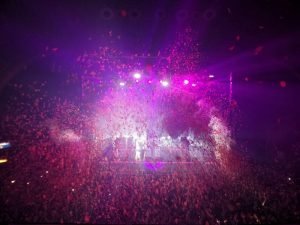 ‘She’s Casual’ was a particularly special moment, with a burst of pink confetti petals, swaying and lights in the crowd.

Potter needn’t sing when the audience knew every word and sang the roof off the Apollo.

This was followed by another new song, which is possibly called ‘Flicking your Hair’, but the screams from the crowd drowned out Potter.

Again this was special as people were singing along to it even though it hasn’t even been released-some die hard fans were in the room.

Potter took a cliché rock star moment on ‘Rock My Way’ in his leatherette trousers, on his knees, rocking out on his guitar.Then everything went dark and the band left the stage.

“We want more” chants soon followed and the band came back in their co-ordinated dare biker jackets, so clearly ‘Dare’, the latest single, was next.

The vocals were heard to hear in a lot of parts on this song which was a disappointment.

But, the finale ‘Bonfire’ soon restored faith. Their first single, the song that made most people fall head-over-heels for these guys -an obvious choice to end a colossal show on.

However, not before they take the time to thank everyone for making their dreams come true.

@THEHUNNABAND Last night was mental!! Would LOVE to do it alllll again 100 times… Was the best night of my life ??? #thehunna

Dare is available for pre-order and hits the shelves in May. If their first album made them blow up like a bonfire, then this one is set to be nuclear!