Words and images by Caroline Howley.

Men relax on the roadside, swigging potent rum and playing dominoes; muscle-bound street artists flog their colourful wares, topless in the balmy heat. Doors flung open offer intriguing windows into the lives lived on these streets: the buzz of barbers’ shears, a few bars of brash salsa music from a radio, the pungent aroma of cigar smoke. In the shade of a gothic church, an elderly woman clad in white silk casts fortunes, a cigar resting in the corner of her mouth, cards and shells scattered before her. Ten CUCs for a good fortune, 20 for a better one, or so goes the joke. 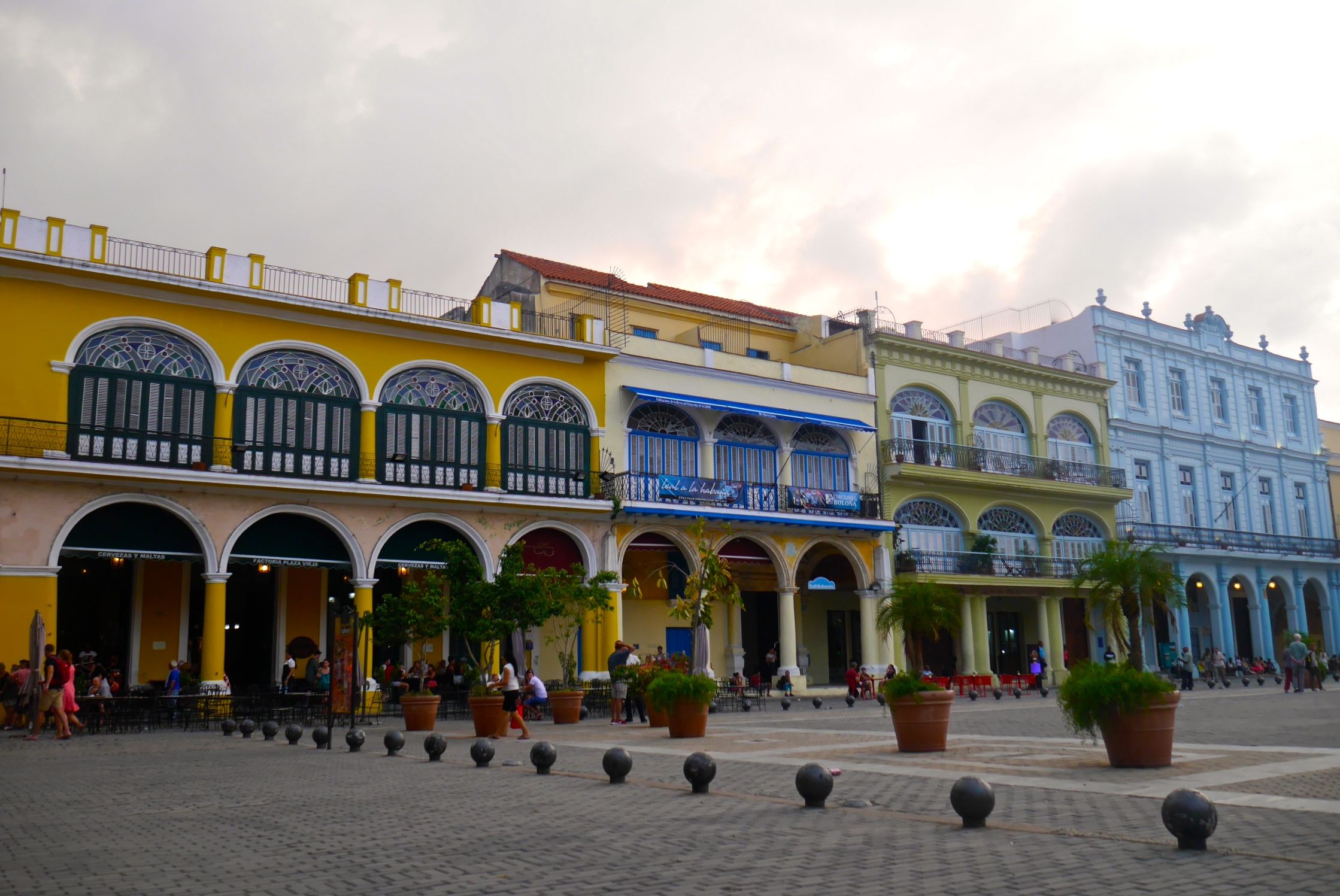 Old Havana is endlessly seductive, and as we wandered its labyrinthine streets, I wanted to peer in every window and explore every avenue. However, after an idyllic week on the Cuban island of Cayo Santa Maria, I had only eight hours to explore this UNESCO World Heritage Site. What would I be able to see in just one day? 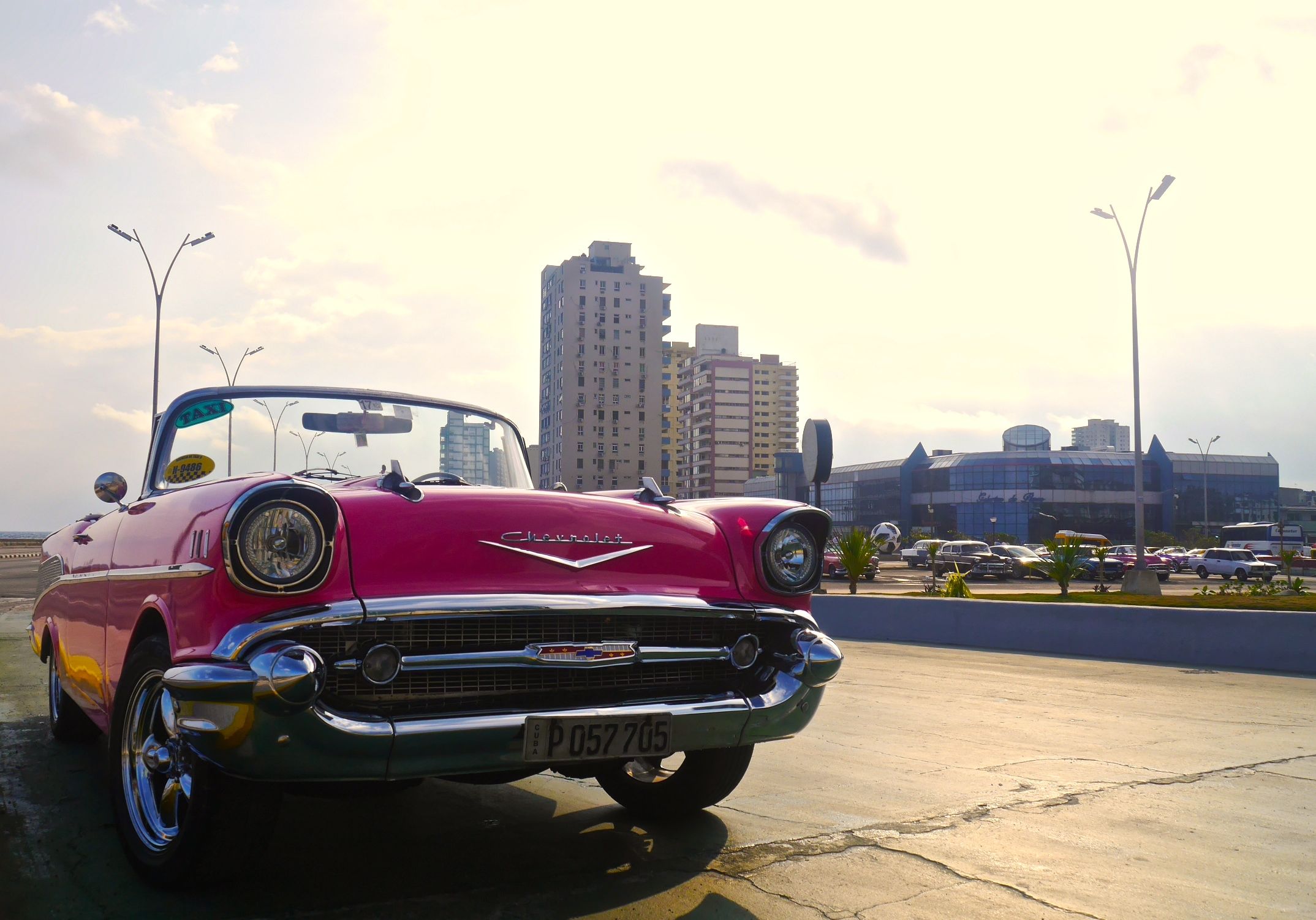 That morning we’d stepped out of the Hotel Riviera to be greeted by a line of classic convertible cars; pink, green, purple, blue and red, glinting in the sun against the iconic backdrop of Havana’s Malecon seafront promenade. The rainbow-hued cavalcade for our tour of Havana had arrived.

I climbed into a hot pink Bonneville, and sank into the plush leather seat, feeling a pang of unearned nostalgia at the vintage dashboard and steering wheel. Our driver proudly explained this was the only model of its kind running in Cuba. In fact, while there’s around 60,000 classic cars on Cuba’s roads – a sight that takes some getting used to – only 200 of them are convertibles. These American vehicles are a throwback to the time before Cuba’s 1950s revolution, when Mafia bosses rubbed shoulders with the glamorous American millionaires and celebrities who flocked to Cuba to let loose, give in to their vices and sin a little. Bouncing around in the back of this dreamy car, wind in our hair as we motored towards Revolution Square, I could totally understand the appeal. 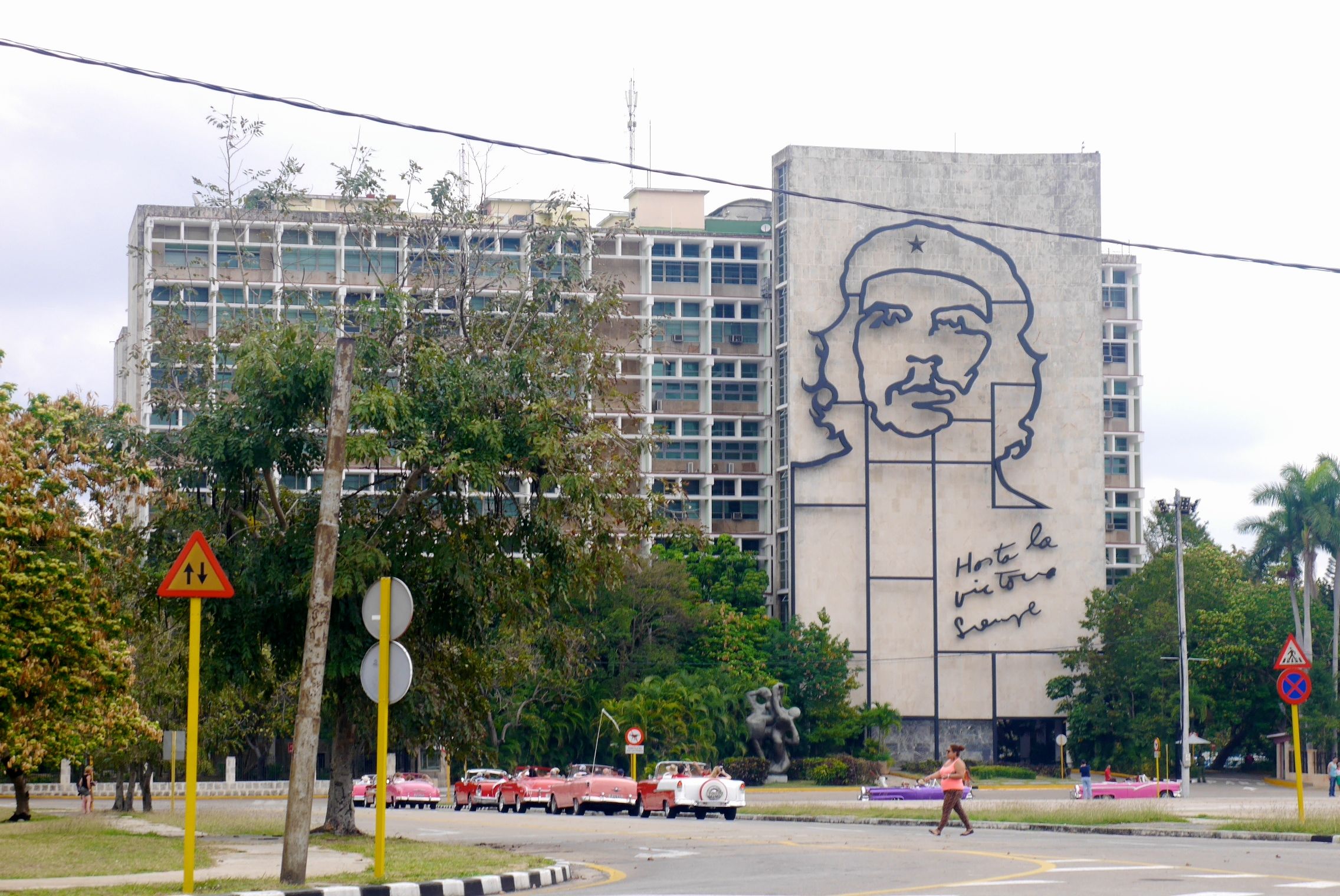 Our guide pointed at an office block overlooking Revolution Square, nondescript but for the massive portrait of Ernesto “Che” Guevara slapped on the side. “That’s where Ernesto used to work, the Ministry of Interior,” he said. I found it difficult to imagine Che Guevara working in an office, being so familiar with the revolutionary image presented of him. He’s a figure we imagine embroiled in guerilla warfare, inhaling on a cigar deep in the leafy jungle, or – as he’s depicted on so many T-shirts – staring into the middle-distance, military beret planted firmly on his head.

Revolution Square is hugely significant, being home to a number of government offices, and the site where famous figures like Fidel Castro and Pope John Paul II repeatedly addressed the people of Cuba. The vast square itself measures 72,000 square metres, and houses the 109-metre-tall José Martí Memorial and the National Theatre. José Martí may not be a familiar name to many outside of Latin America, but he was an important Cuban patriot, who paved the way for Castro and Guevara. 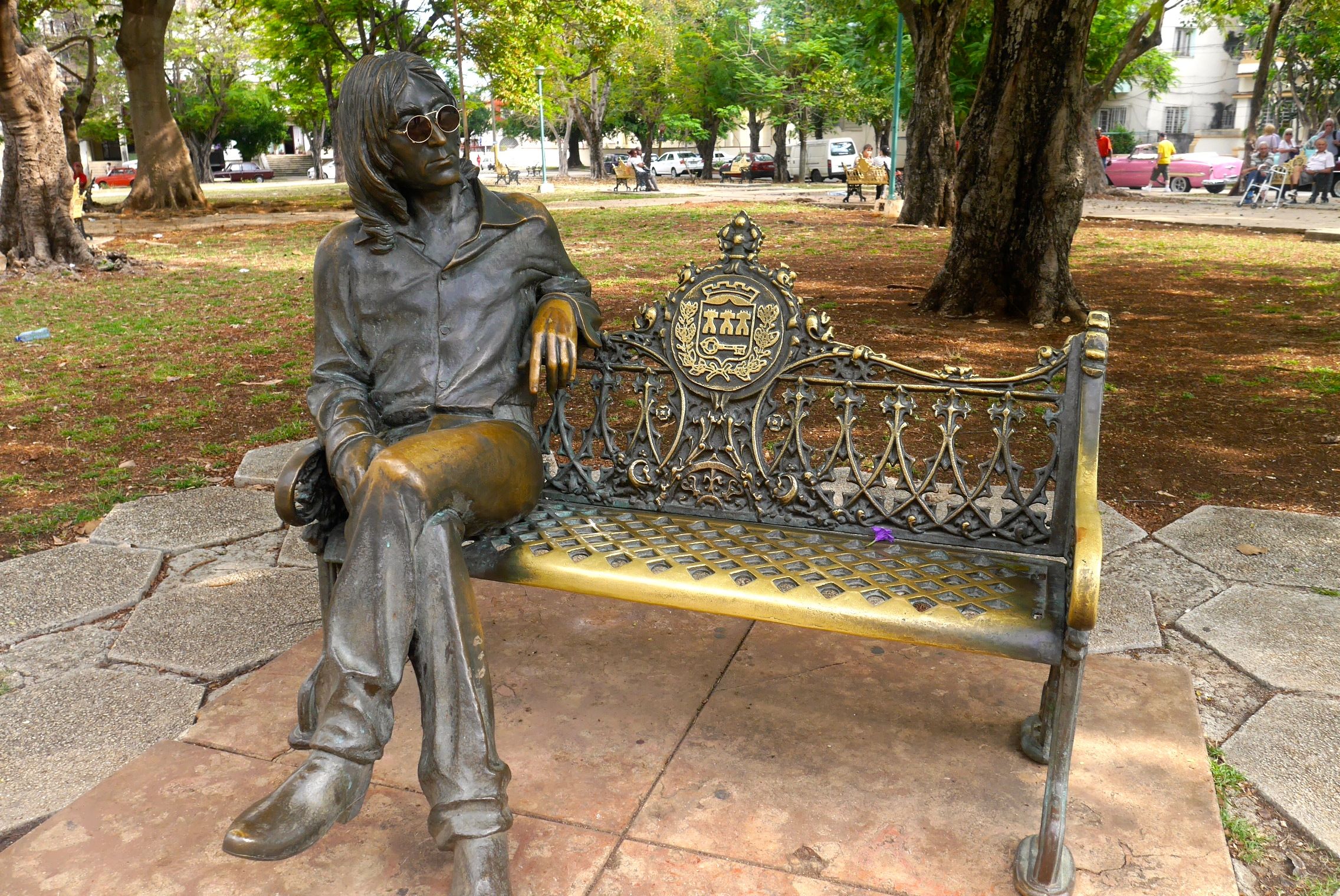 “Did the Beatles ever visit Cuba?” I naively asked our guide, on the way to Havana’s John Lennon Park. It seemed like a fair question at the time. However, it turned out that not only did Lennon and co never set foot on Cuban soil, but Cuba actually has something of a chequered past when it comes to the Fab Four. Post-revolution, the music of the Beatles was banned in Cuba – along with that of other British and US artists – sparking a black market in western music. The idea of people having to covertly listen to squeaky clean hits like ‘I Want To Hold Your Hand’ now seems absurd, but many western artists were considered anti-communist.

So why is there a park dedicated to John Lennon in Havana?

Simply put, Fidel Castro had a change of heart. When unveiling the Lennon statue in 2000, Castro said: “What makes him great in my eyes is his thinking, his ideas. I share his dreams completely. I too am a dreamer who has seen his dreams turn into reality.” Ultimately, Fidel had reimagined Lennon as a political dissident as opposed to the puppet of western regime he had previously considered him to be.

The leafy park is relatively small, so we found the bronze statue of John reclining on a bench right away. But there was clearly something missing. We soon found out what when a Cuban woman wandered over and placed a pair of Lennon’s iconic circular glasses on his face. Our guide explained that after the statue’s glasses were stolen a number of times, a ‘keeper of the glasses’ was hired. It’s her sole job to look after the blue-tinted specs, putting them on whenever visitors wander over. 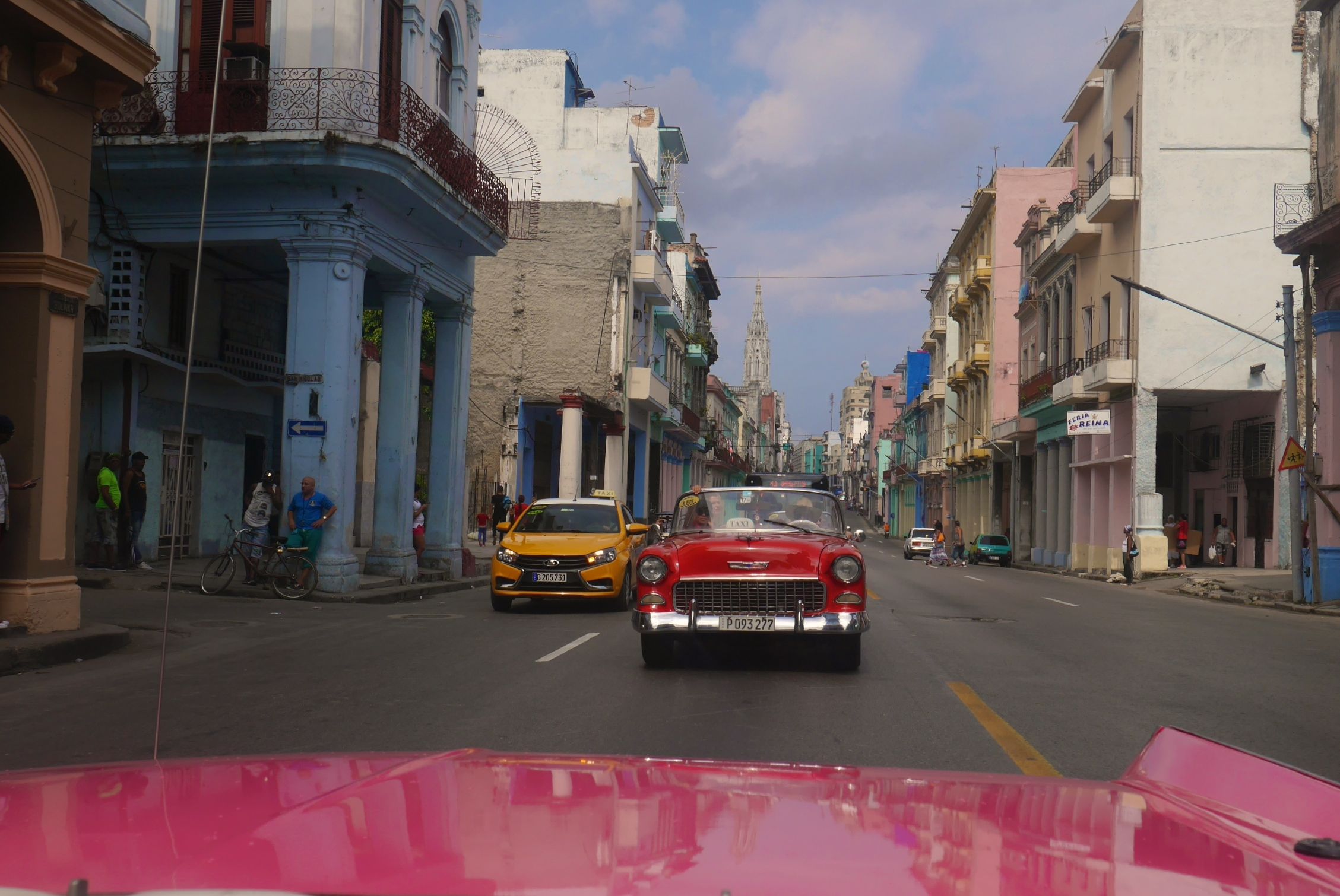 Havana’s Old Town is probably the image that springs to mind when you think of Cuba. Crumbling buildings in pastel hues with shuttered windows, women shouting down from wrought iron balconies above; the streets opening up to reveal grandiose plazas every now and then. And this evocative scene is largely true to life.

Old Havana is currently undergoing a huge renovation, as some of the buildings – as charmingly rustic as they may appear to snap-happy tourists – have become unlivable. This means that part of the area has been freshly painted and restored, with upmarket bars, restaurants and hotels now open, but the renovations always remain true to the original architecture of the buildings.

We meandered through the area, taking in the scenes unfolding around us. A group of teenagers sat outside a church in crisp white shirts and black trousers, on a break from their training to be waiting staff. Dogs and cats lazed on doorsteps and under the classic cars parked nearby, and a group of men and boys sat around a table playing dominoes. A woman lowered a basket on a rope from her balcony to her friend waiting below. “We have the most beautiful people in the world, dark skin with light eyes,” said our guide, “I’m sorry but it’s true”. Everything seemed slow and languid, this feeling punctuated only by bursts of live music coming from the bars we passed.

We made our way through the four main squares: Plaza de Armas, Plaza Vieja, Plaza de San Francisco de Asis and Plaza de la Catedral, each spectacular in its own way. There were numerous churches and monuments to see along the way and yet every building is different; from Spanish Colonial structures to the Neoclassical and Baroque.

One major highlight was La Bodeguita del Medio, where Hemingway – or ‘papa’, as he is known to Cubans – allegedly used to take his mojitos. We discovered it packed, with a traditional band playing, and the scrawled messages of thousands of previous guests adorning the deep blue walls.

Finally it was time to imbibe some of this intoxicating culture for ourselves. Mojitos are a popular cocktail the world over, but the sticky sweet version served in Havana is second to none, and dangerously moreish. You simply cannot visit Cuba without sampling this national drink.

After a couple of beverages we visited a wood-panelled shop where cigars sat from wall-to-wall on the countertop, and learned of the Winston Churchill connection. The wartime Prime Minister was a famous cigar aficionado, and you can buy his favourite – Romeo y Julieta – for roughly £7 a pop. This was also our chance to stock up on rum for the trip home, with a mind-numbing range of options furnishing the shelves.

We rounded our trip off by watching a traditional Flamenco performance. As the dancers twirled and stamped to spectacular effect, I reflected on how deeply entwined musicality is with Cuban culture. On our trip, there’d been noisy, flamboyant performances around every corner, from African drumming to salsa and rumba.

Was eight hours in Havana enough?

While our tour gave us an amazing and thorough overview of Havana, from the classic cars to the walking tour of the Old Town, our flying visit meant we didn’t have time to return to the places we’d been shown and truly soak up the relaxed pace of life enjoyed by Habaneros. It certainly gave me an appetite for hot, colourful Havana, but much like a tall, refreshing mojito, was gone all too soon. I’ll be sure to return for another taste.