Labelled as the ‘casual dining destination’ SURI restaurant which is located in the hustle and bustle of busy King Street invited us down to try its’ brand new lunch express menu and it did not disappoint.

Stepping into the restaurant VIVA were dazzled by the chic and classy interior, which oozes sophistication with its’ ambient lighting, tableside mirrors and floor length windows, which allow diners to gaze out at the streets below. 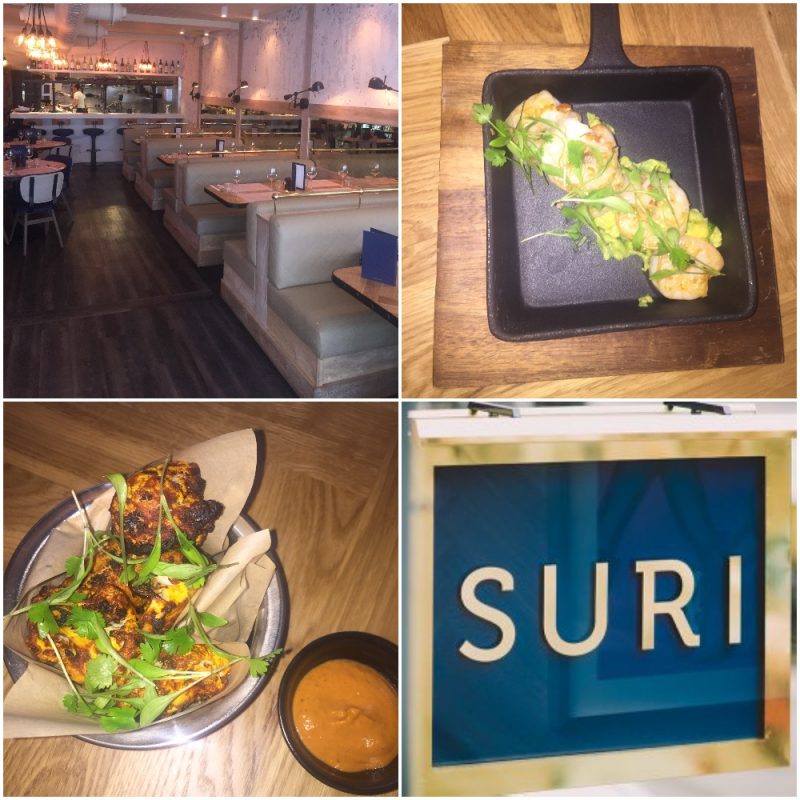 As we were escorted up the spiral staircase to the top floor, the friendly waiting staff seated us in a booth table, where there would be plenty of room for the food (and drink!), that we were about to taste.

After ordering our drinks, we were given the express menu which offers a variety of mouth-watering Middle-Eastern and Mediterranean signature dishes which are perfect for the summer season- and at £15 for 3 dishes it is very reasonably priced.

Ensuring we got the most out of the menu, we went for six different dishes and opted for them to come out as and when they were ready, when given the option by our waitress.

First to arrive, as an appetiser, was the Persian spiced bread which was a great start to the meal due to the light and full flavours of the bread which were accompanied with a smashed vegetable and chickpea dip.

Following on from this was the ‘Hanout prawns and smashed avocado’. These were delicious and succulent, with a spice that complimented the palette, the avocado leaving a satisfying taste in the mouth. 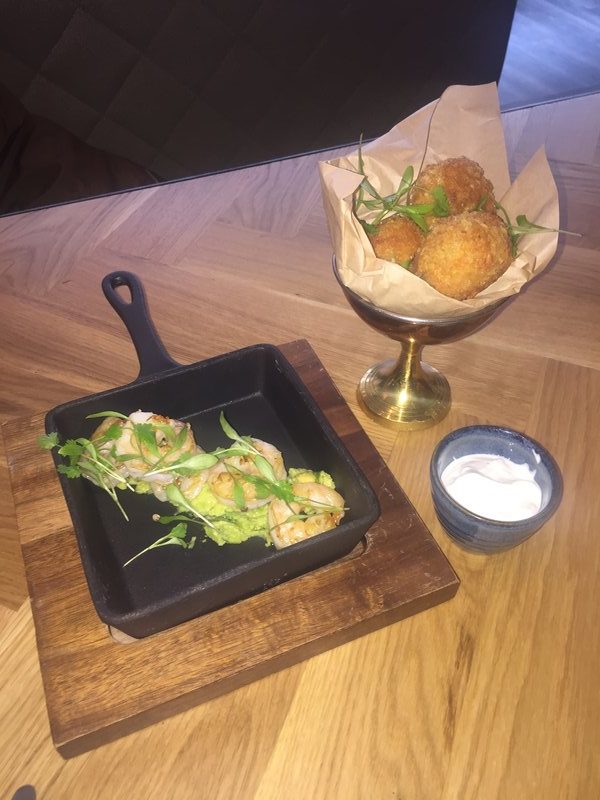 Always a curious diner, the next dish we opted for was the ‘Chickpea kibbeh with spiced yoghurt’. The croquettes, although not my favourite, were soft, comforting and not overpowering to taste. The yoghurt which accompanied gave the dish some zest which was refreshing and delightful.

Next was my favourite dish, the ‘Hawaij pork rib eye steak and chick pea dahl’. Absolutely cooked to perfection, the steak was so tender it required little chewing and the orange blossom made the meat vibrant and summery. Complimenting the rush of sweet and smoky flavours, the chickpea dahl perfectly soothed the tastebuds with its soft and smooth texture. 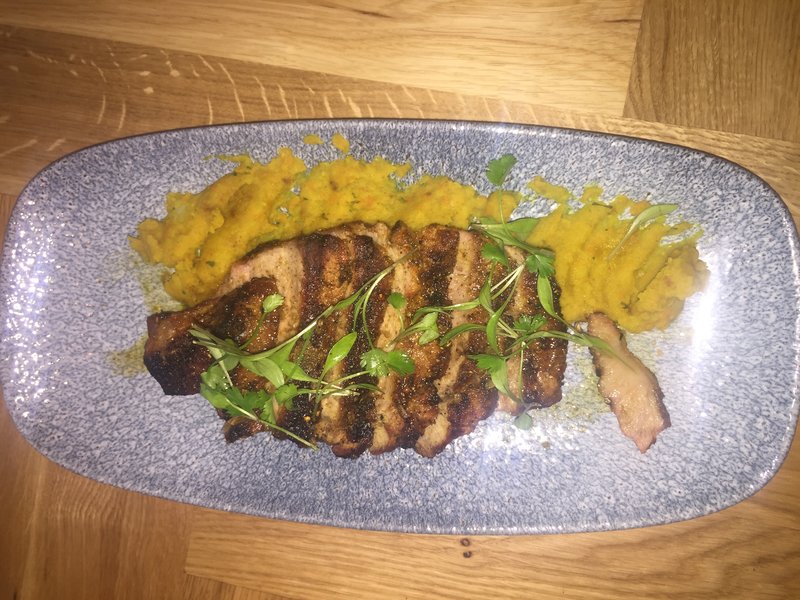 Brought to us next was the ‘Roasted cauliflower with tahini spice’ and a red pepper and aubergine dip. Not usually a fan of cauliflower due to being force fed it as a child, I was pleasantly surprised as the taste was lovely and the florets roasted to perfection. The red pepper sauce left our pallettes refreshed and brought an essence of lightness to the dish.

The dish that came next was interesting, as it did not share the sweet flavours that had been brought in previous dishes- the ‘Seasonal greens’. Nevertheless, the greens contrasted with the sweet flavours and when consumed alongside the other dishes perfectly complemented them.

As we finished our mains and were greeted by our lovely waitress, we were asked if we wanted to have a taster of any of the deserts that the express menu had to offer. 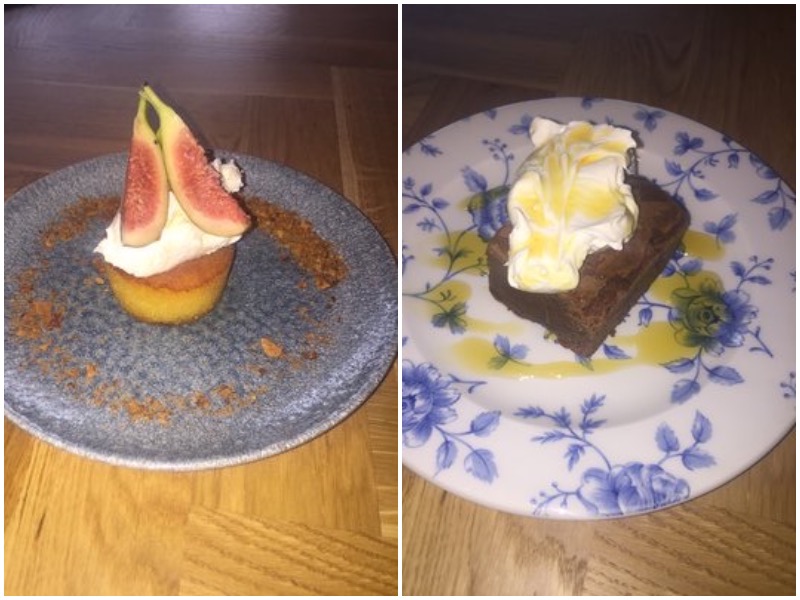 With one look at the delicious deserts (and a slight sweet tooth!), we opted for the ‘Epic brownie’ and the ‘Polenta baba’.

The brownie which was accompanied by whipped mascarpone was rich yet delicious, with a different, yet tasteful touch of orange syrup to compliment the dish. The polenta was light and dreamy, with the fig, mascarpone and cinnamon combination giving it a burst of flavour

After realising that we had been sat in the restaurant for a good three hours, tasting the delicious menu that SURI provided, we had one last drink of perfectly made espresso martinis which were an idyllic ending to the meal!

VIVA Verdict: A vibrant burst of flavours which have been carefully created and placed into a Mediterranean express menu that offers something to soothe the palettes of a range of customers.

SURI’s new lunchtime express menu is available Monday-Friday between 12-6pm and is £15 per person, to find out more or to make a reservation, go to: http://www.surirestaurant.co.uk