A London pub has hired a Chief Excuse Officer – to help customers enjoy the sporting fixtures of Super Saturday uninterrupted.

December 7th is set to be the busiest day of the year for UK pubs with 12 hours of sports scheduled.

To make sure revellers don’t miss any of the football fixtures or the World Heavyweight title fight between Anthony Joshua and Andy Ruiz Jr, the ‘CEO’ at Greene King’s The Globe, Baker Street, will provide punters with excuses to keep their friends and family off their case.

The CEO will phone partners, parents and pals with believable excuses – from punctures to flat batteries and road closures to cancelled trains – to explain why the person in question is unable to meet them at the arranged time.

In a video of the CEO in action, one football fan was ‘excused’ from dog-sitting duties after his car supposedly broke down.

Another used the pop-up service to avoid babysitting for her sister for a couple of hours, on the pretext that she was stuck in traffic and her phone battery had run down. 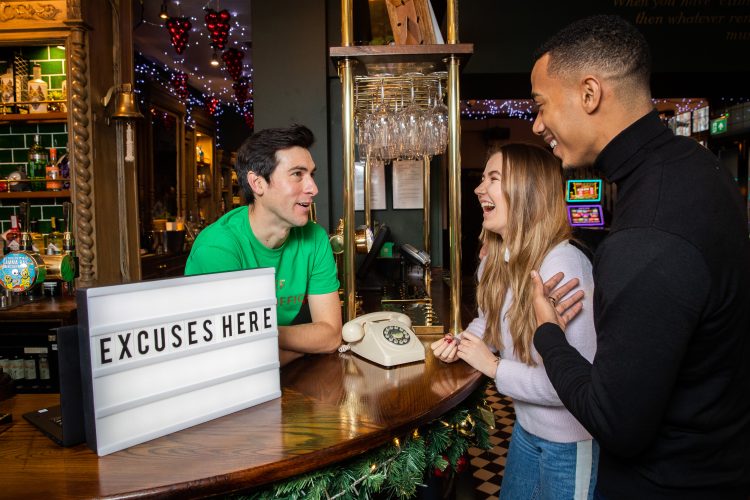 The local derby between Manchester City and Manchester United is expected to draw the biggest viewership, followed by Everton versus Chelsea, and Bournemouth versus Liverpool.

Chris Conchie, head of sport at Greene King, said: “Super Saturday is the biggest day of the year for football and with the boxing match on the same day, there is a risk that dedicated fans might be unable to catch every minute of the action.

“There’s nothing worse than wanting to spend time in the pub but knowing you’re on a deadline and have to leave in the middle of the match because you’re meant to be elsewhere.

“Our ‘CEO’ – ‘Chief Excuse Officer’ – will be on hand at the bar throughout Super Saturday to aid punters in need of a quick one-liner, to ensure their place in the pub is secure all day without any distractions.”

It comes after a study of 2,000 Brits found 27 per cent have told a ‘white lie’ in order to escape to the pub to watch a sporting fixture.

One in four adults have made a deal with their partner in the past to allow them to stay in the pub to watch a game on the big screen, while more than a third have offered to do chores around the house.

And one in three have been allowed out by their other half, as long as they promised to do all the washing up when returning home.

When put on the spot by a needy partner or pal trying to pry them from the pub, 15 per cent are most likely to say they bumped into an old friend and are unable to come home.

Other popular excuses include ‘someone’s just offered a free round’, ‘I owe my friend a drink’ and ‘my friend just got dumped and I need to comfort them’.

More than two thirds of those surveyed named the pub as one of their favourite venues to watch a sporting event.

Around 56 per cent put this down to their local having a better atmosphere than their living room, while 45 per cent enjoy the game more with a pint in their hand.

Half of those polled even use a match at the pub as an excuse to catch up with mates and 40 per cent said the pub has a better TV set-up for watching the match than they do at home.

Chris Conchie added: “This Super Saturday, Greene King pubs expect to pour around 800,000 pints to sporting fans both during the day and into the evening.”

TOP 20 EXCUSES USED TO STAY IN THE PUB

1. You bumped into an old friend
2. Your friend has something important to tell you and you need to hear them out – might be a while
3. Traffic on the way home is a nightmare
4. It’s a friend of a friend’s birthday
5. It’s pouring with rain
6. Someone just offered you a free round
7. Your friend ordered food for the table -and it’s taking ages
8. Your friend owes you a drink
9. You need a lift home and your friends don’t want to leave yet
10. You owe your friend a drink
11. Your friend just got dumped – and wants to drown their sorrows
12. Happy hour just started so you’re staying for one more drink
13. You got chatting to someone you’ve never met before
14. Your single friend is trying to pull – and needs a wing-man
15. You’ve been asked to work late
16. You JUST got a table
17. A friend is throwing up and you have to look after them
18. Pub is too packed for you to get to the door
19. Your train was cancelled
20. The road is closed