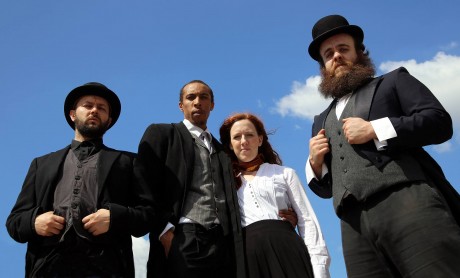 On the 20th and 21st of May a play inspired by Michael Herbert’s book ‘Never Counted Out’ is coming to The Octagon Theatre in Bolton.

The play tells the story of the greatest British middleweight boxer never to be champion.  Denied the opportunity to fight for the British title because he was black, the colour bar was not lifted in the UK until 1948. Len Johnson was an extraordinary man who continued to fight against the discrimination he was facing.

Len Johnson Fighter questions and exposes the depths of racism inherent in British society. It is a tale of a true working class hero, who fought for all, regardless of race or creed.

The play was written by Colin Conner and Directed by Nick Birchill. The score is by Mark Simpson, who is originally from Salford. Mark has used themes from the early 20th century to create an original score that reflects a region afflicted by two world wars and their aftermath. Mark has adapted his score to further engage the audience in both live performances and recorded music.

Jarreau Benjamin, who was nominated for a Manchester Theatre Award for his portrayal of Len, said: “I’m so passionate about all the things he was fighting for. He was a boxer and he went on to do some amazing things. I’m really glad to be a part of it. It is really emotional.”

It’s already proved to be popular, the play was sold out every night during the Greater Manchester Fringe Festival last year. Don’t miss out on seeing this great piece of theatre this month at The Octagon Theatre.

This phenomenal production of ‘Len Johnson Fighter’ is not to be missed.