‘Battle of the Biers’ returns to Oktoberfest at Albert Hall

Here in Manchester we love a beer, great food and a good time. Oktoberfest is a time to get away from those autumn blues, get out of the cold into a hall full of people who just want to have fun. Coinciding with the original festivities in Munich it’s a great event to brighten up a drizzly day in Manchester.

This year the weekend bier hall event will take place in 3 amazing venues for 3 bier hall sessions, it’s one not to be missed. This is the line up of the events:

Battle of the Biers

The ‘Battle of the Biers’ returns to Albert Hall, this year’s Oktoberfest kicks off on Friday, 20th September to coincide with the original festivities in Munich.

This year, the weekend bier hall event will take place on September 20th and 21st at Albert Hall and will include three Bier hall sessions. 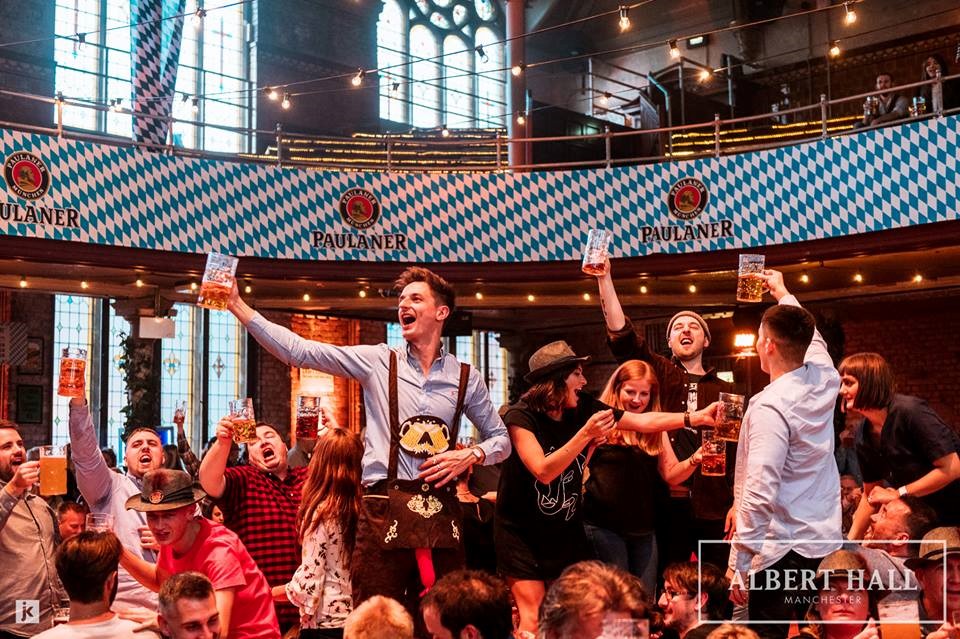 Over 2000 bier lovers are expected to attend, as local Mancunian breweries take on the very best of Bavaria.

Albert Hall will be pouring a selection of Oktoberfest bier specials that are rarely found outside of Germany.

Bavarian powerhouses such as Paulaner and Hacker Pschorr will go toe to toe with Manchester’s very own Manchester Rein, Cloudwater and Seven Brothers, in a battle to pour the finest stein.

In addition to the bier drinking festivities, which is set to be the biggest yet in Manchester’s multi award winning music venue, you can expect a line-up including some of Manchester’s well renowned music acts. There will also be plenty of Bratwursts in the sausage eating championship and there’s even a best-dressed lederhosen competition on the cards for this year’s bier bonanza!

The official festival starts mid-September and ends the first weekend in October.

Manchester’s ‘Oktoberfest Albert Hall’ will take place at the same time as the official launch in Munich.

With Brexit fast approaching this may well be the last time Manchester can enjoy Oktoberfest as part of the EU so make sure you get involved with the bier hall event of the year!