Why breathtaking Sicily should be your next oasis break

Sicily is insanely Insta-gorgeous with the kind of sun-dimpled lighting that needs no filter to showcase the raw, natural beauty of this rugged and largest Mediterranean Island.

And you can get to it with Ryanair. In fact, there are two direct flights weekly in high season, priced from just £39.99 to Palermo, the largest city on the island. October 15th officially marked the end of the tourist season and we travelled to make the most of the last tourismo week.

Even end of season, the heat was on with beautiful clear sunny days for the majority of our stay near the second-largest fishing port on the island at Santa Flavia, forty minutes from the airport situated in the north west of the island.

This is a hard-working village, fishing runs the economy and if you’re not on the boats then you’re mending the boats or filleting the fish or cooking up a storm in the handful of bars and restaurants that smatter the harbour. 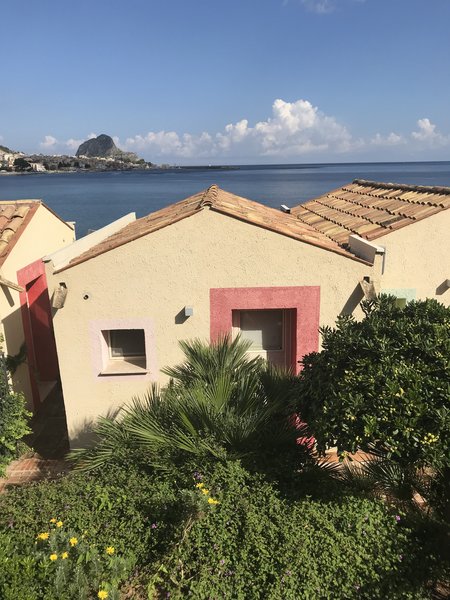 When we travelled there was a fiesta where all the fishermen have a whole week off and paint the town red. It’s a family thing, noisy carnival rides vying with fake goods and stalls selling mountains of toys, candy and lots of nuts. In fact, nuts seemed to be the cornerstone of this celebration which is held in honour of the Virgin Mary looking after her fisher-people flock.

As throngs bustled to walk to the main square, men competed to roast nuts on in blazing oil cans, shouting out that their nuts were the best. It would have had UK health and safety officials in apoplexy as we dodged open flames, prams, people snogging and partying, with a gasping one millimetre of space to try and get through.

There’s a plethora of places to dine and we chose the Kantuccio as it like a fairy castle with gorgeous views of the harbour and people. They say everything is bigger in Sicily and it’s a greedy gourmet delight as we constantly inadvertently over-ordered.

My caprese salad could have fed me for a week and was wonderfully simple, while fruiti de mare could keep even the Travel Man nibbling for a fortnight. This is Italy and the food is superb. The wine is too, with prosecco now one of the UK’s favourite tipples and a bargain here, while the reds throughout our stay were velvety smooth and a meal in themselves. Even the beers such as Moretti taste better here. 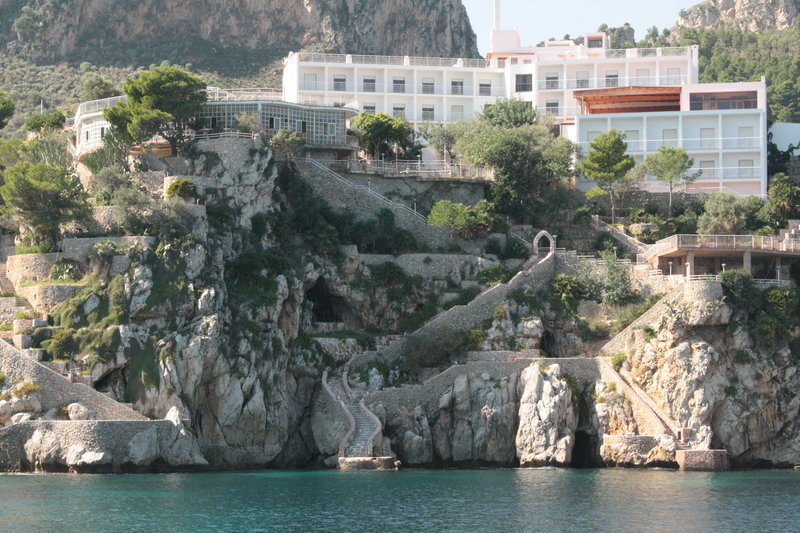 There’s a whole host of places to stay on this side of the island and you can see at high season it would be busy. There were a few Brits but also many of our European cousins and plenty of Americans.

There are big flashy hotels clearly geared up for families with kids’ clubs and entertainment such as The Domina Zageralla where we stayed at and this would be a great family vacay (the gelato alone would get you parent points for months), to more family-run hotels for the authentic experience. It’s ideal for those in love with the kind of romantic backdrops that will stay in the memory bank forever. 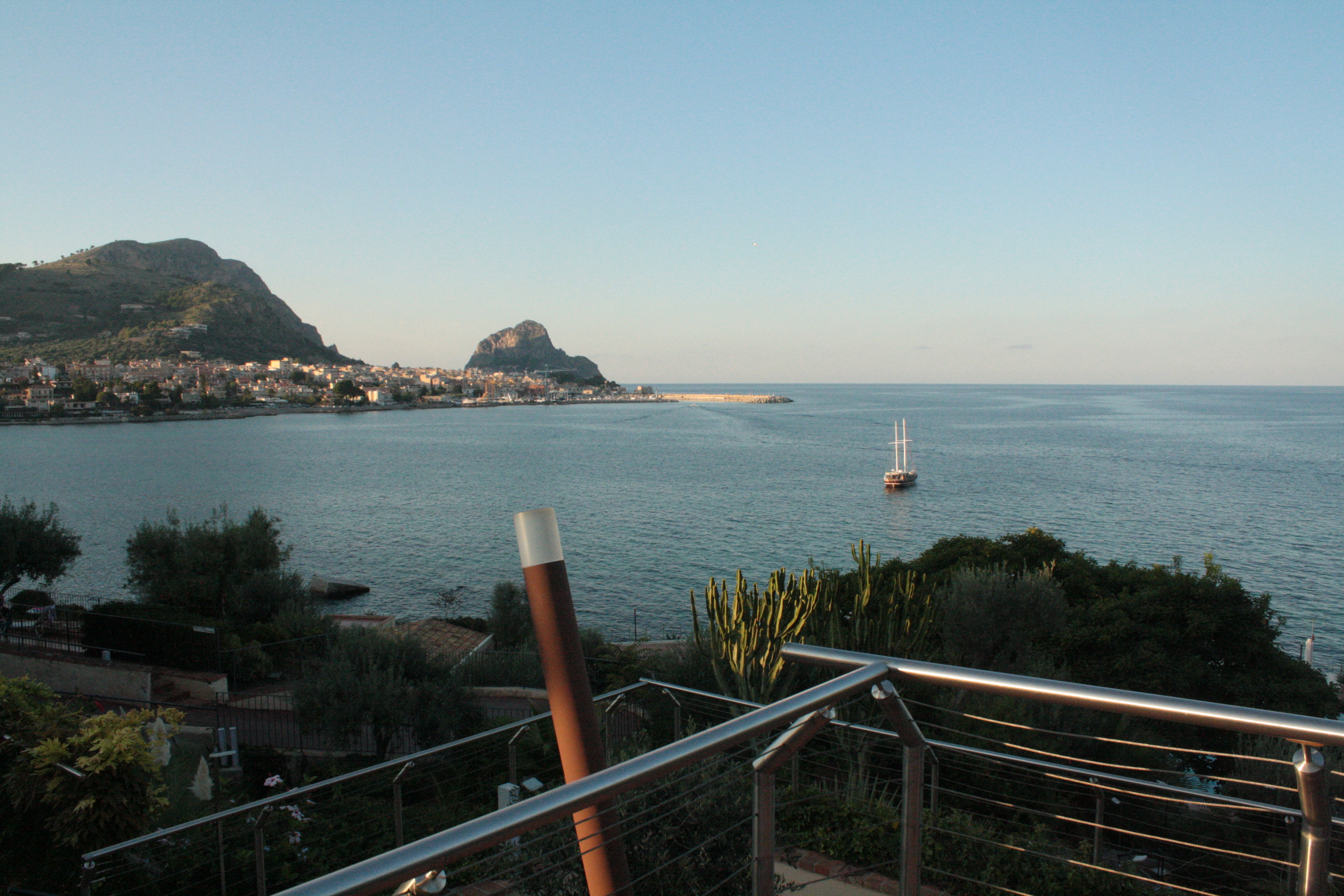 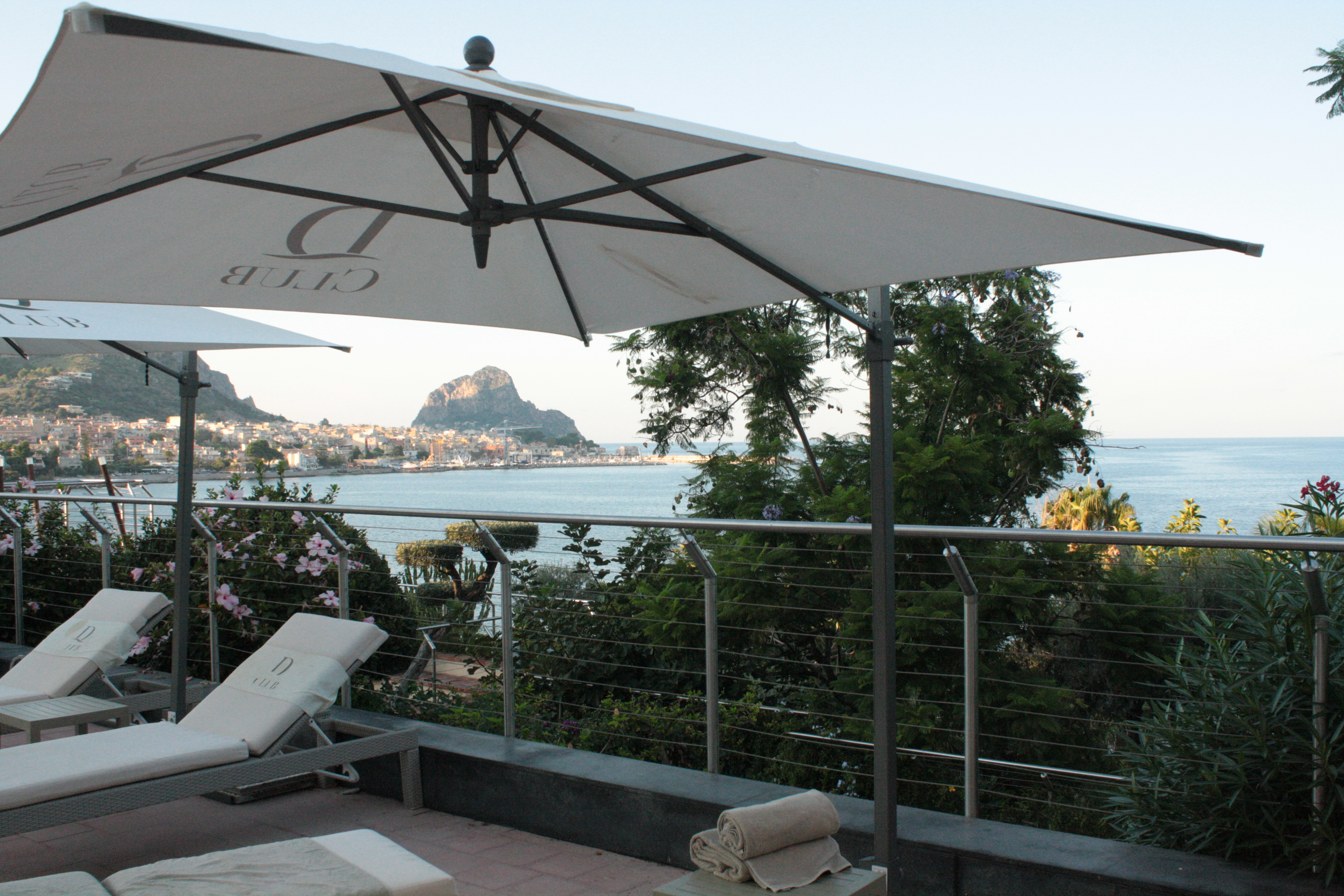 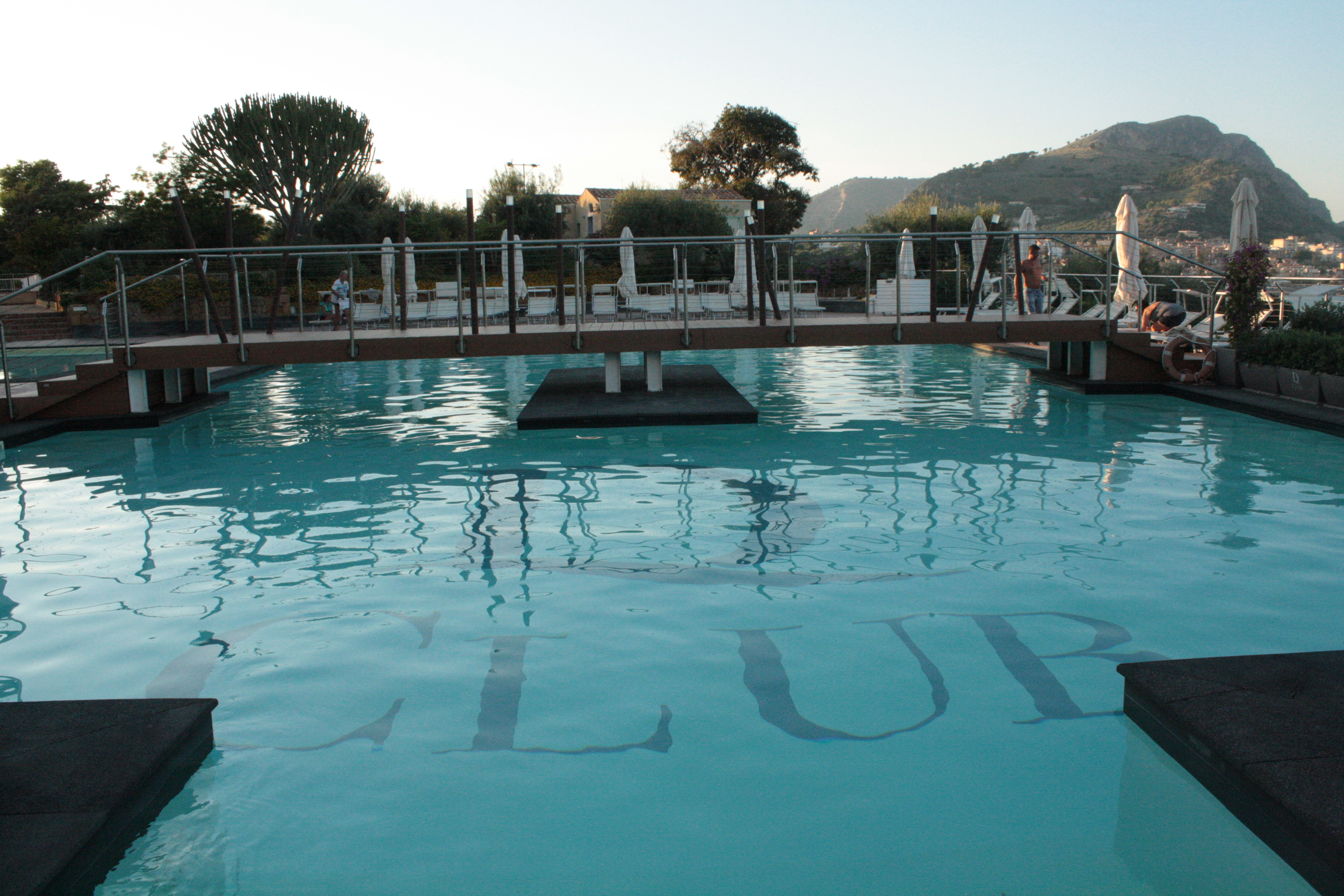 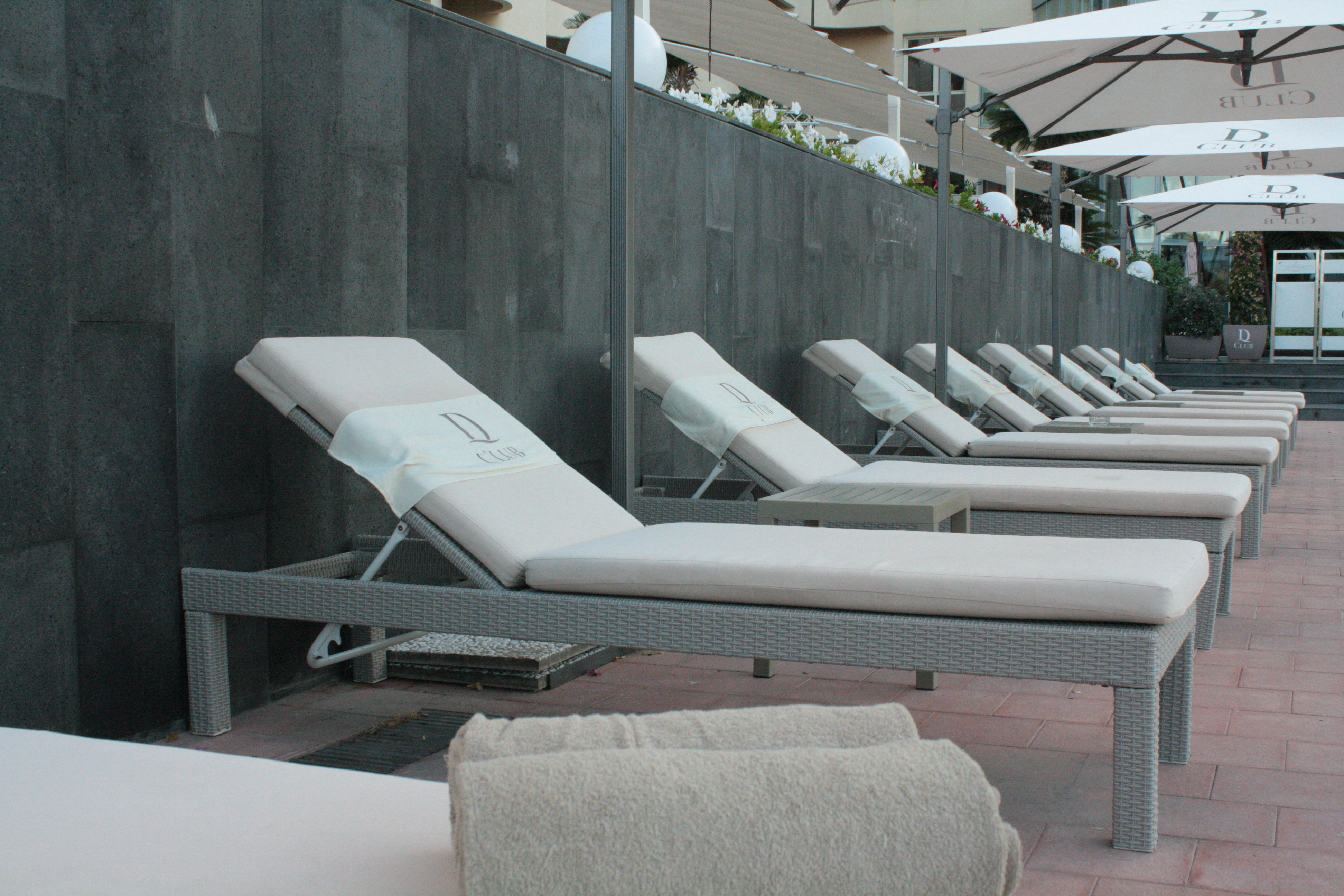 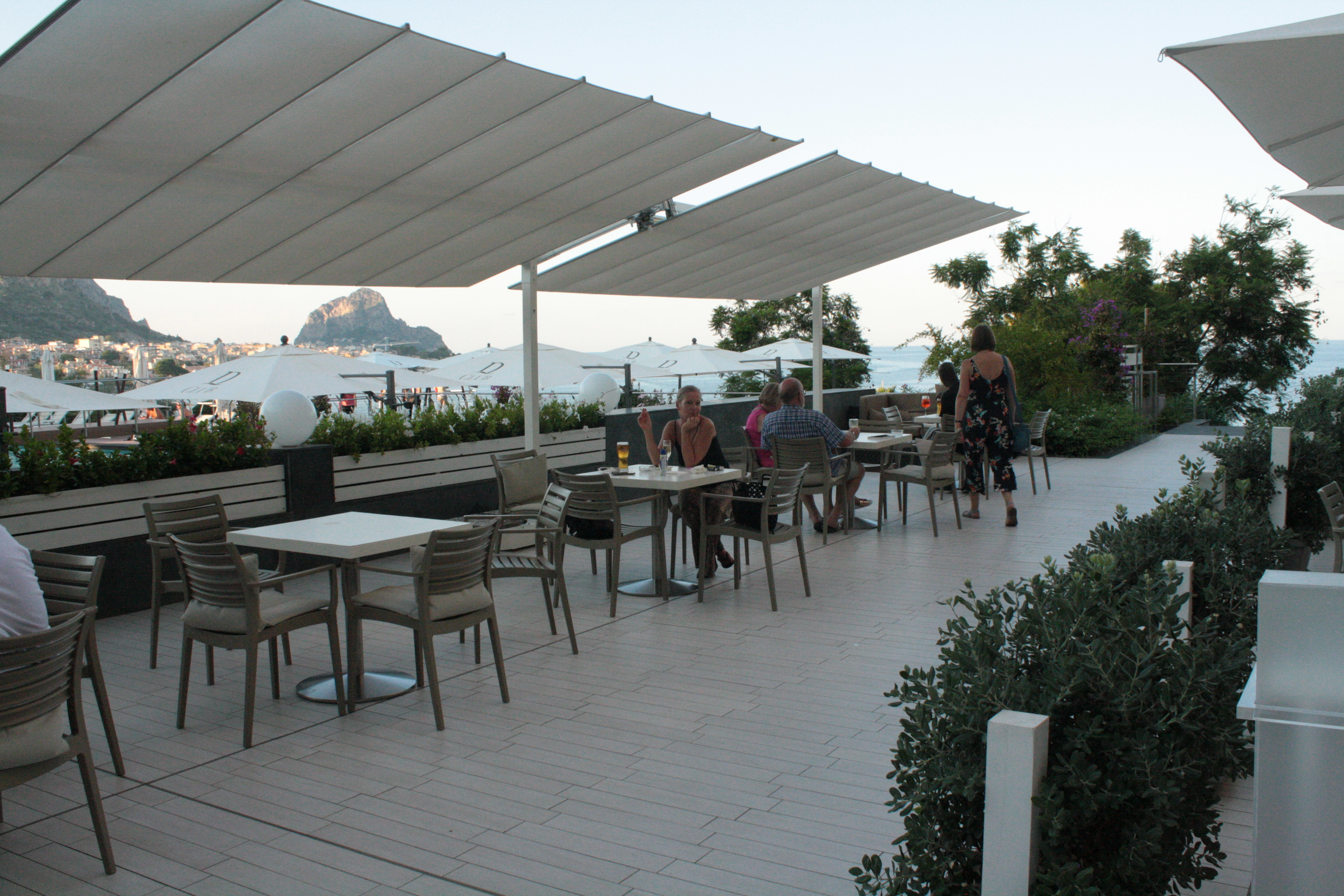 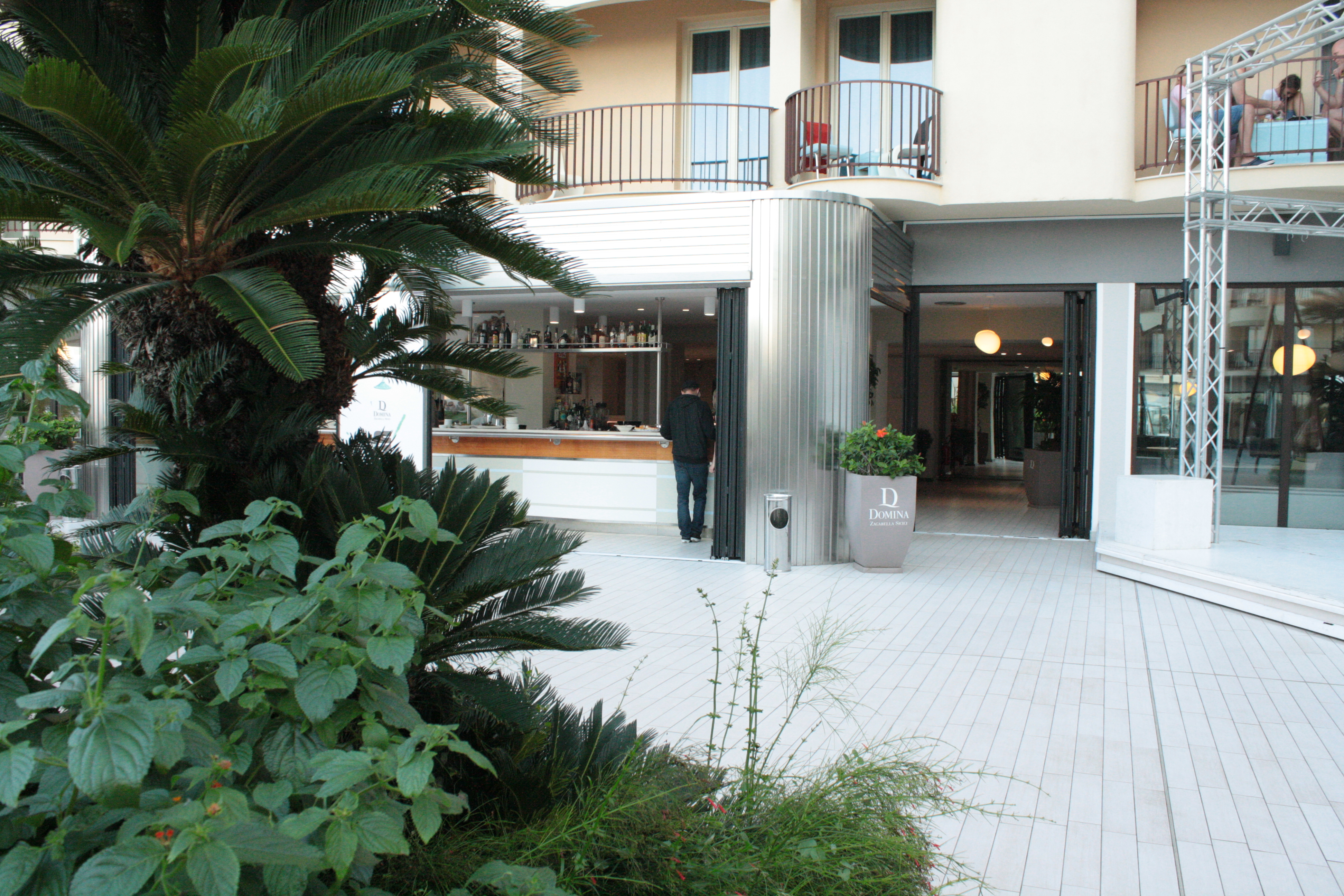 Our favourite bit was La Rotonda in Casteldaccia, just 10 minutes taxi drive from the hotel, where we had the best meal of our lives and also the best red wine ever and for just €60 for two.

The Rotonda restaurant can’t be missed – the clue’s in the name – and had all the best Italians dressed in their finest vying for tables and to be seen. If you’re near this end of the island, you must go and you must must must have the steak.

You can stay here too, as there are a few mum and dad hotels, a wonderful beach and the obligatory sensational views and shopping.

We drank cocktails in the beautiful gardens of Café 113 which you could see would be a great base in the day for luxe sunbathing and was a wonderful backdrop. 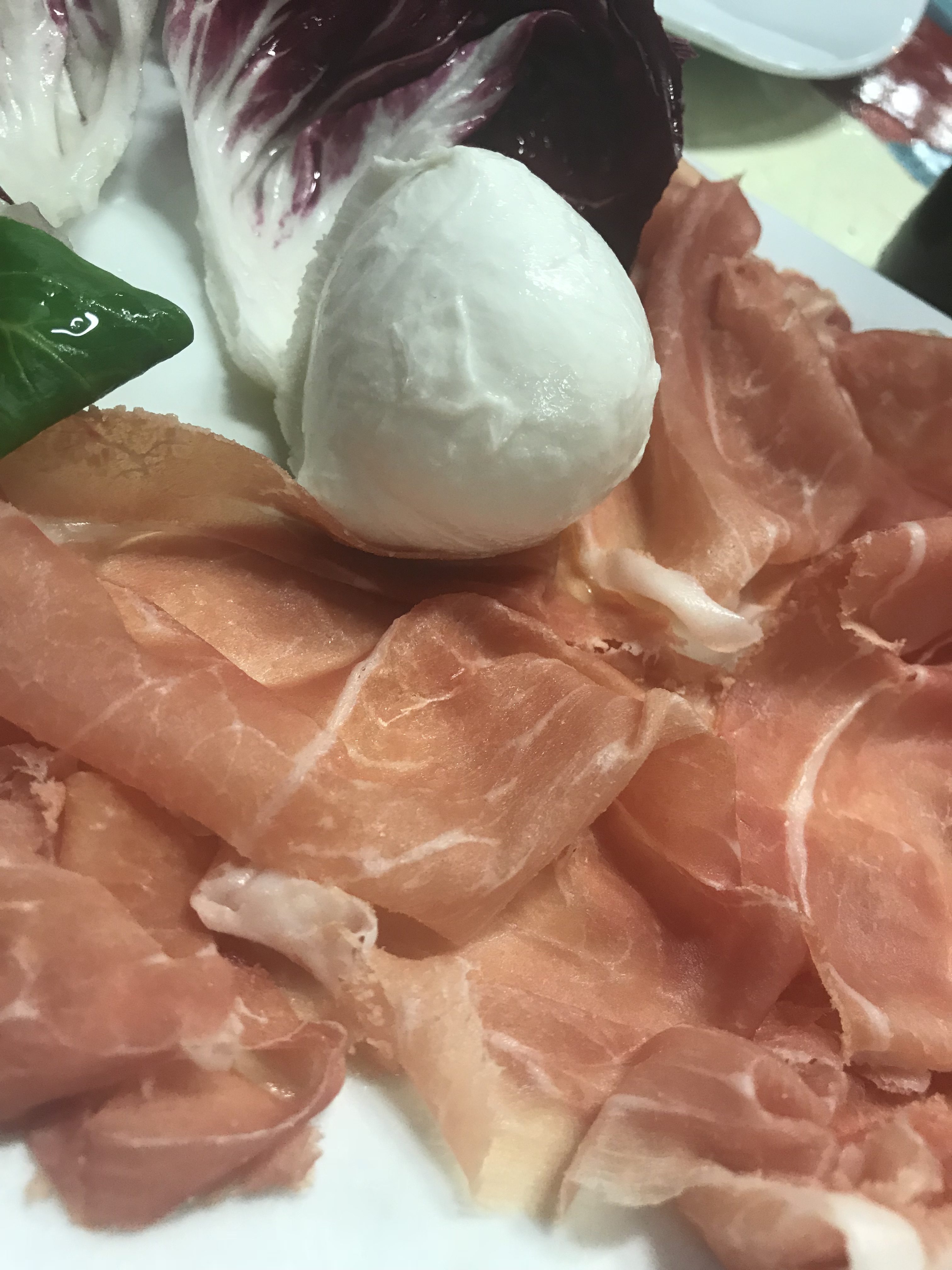 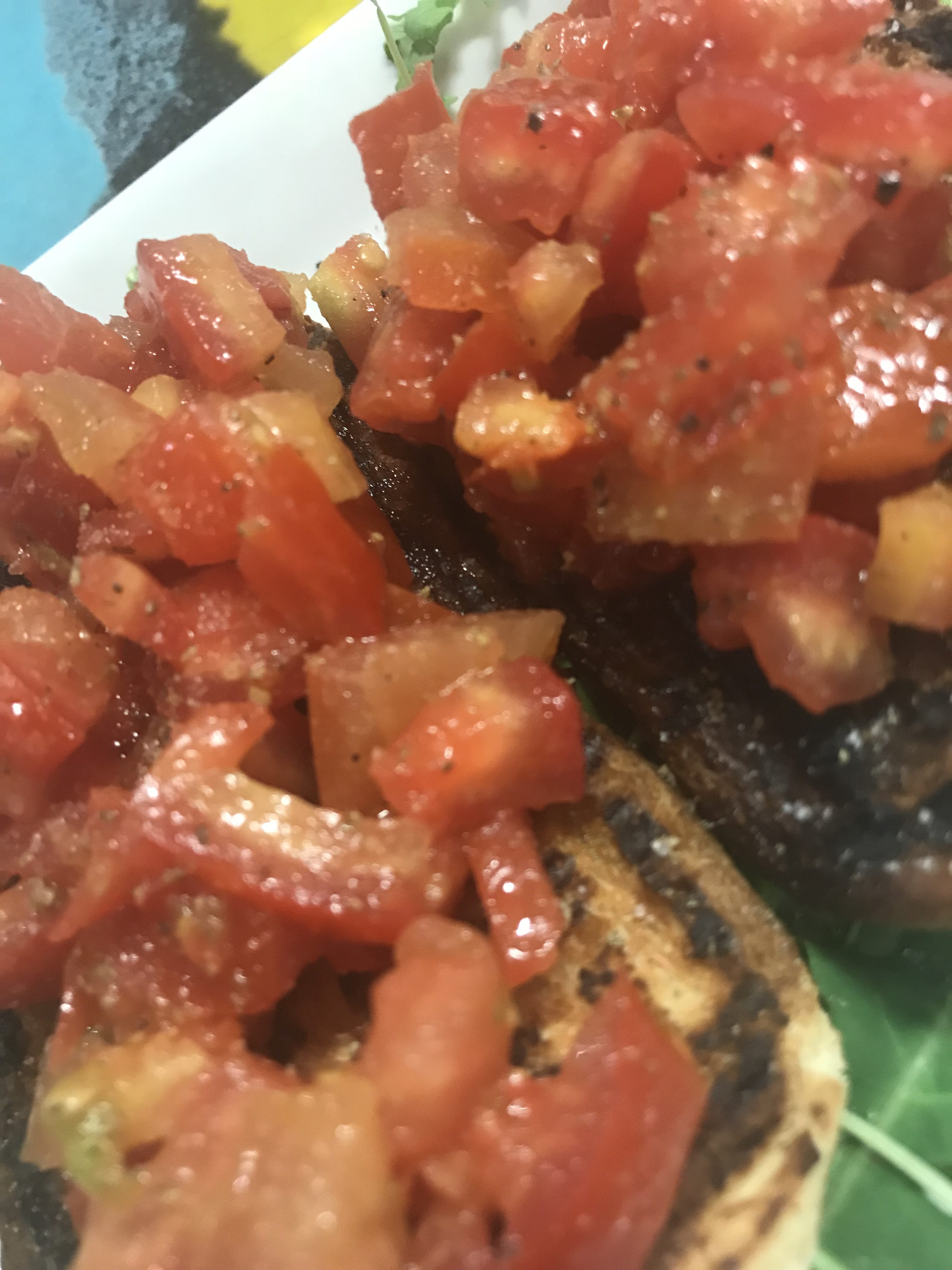 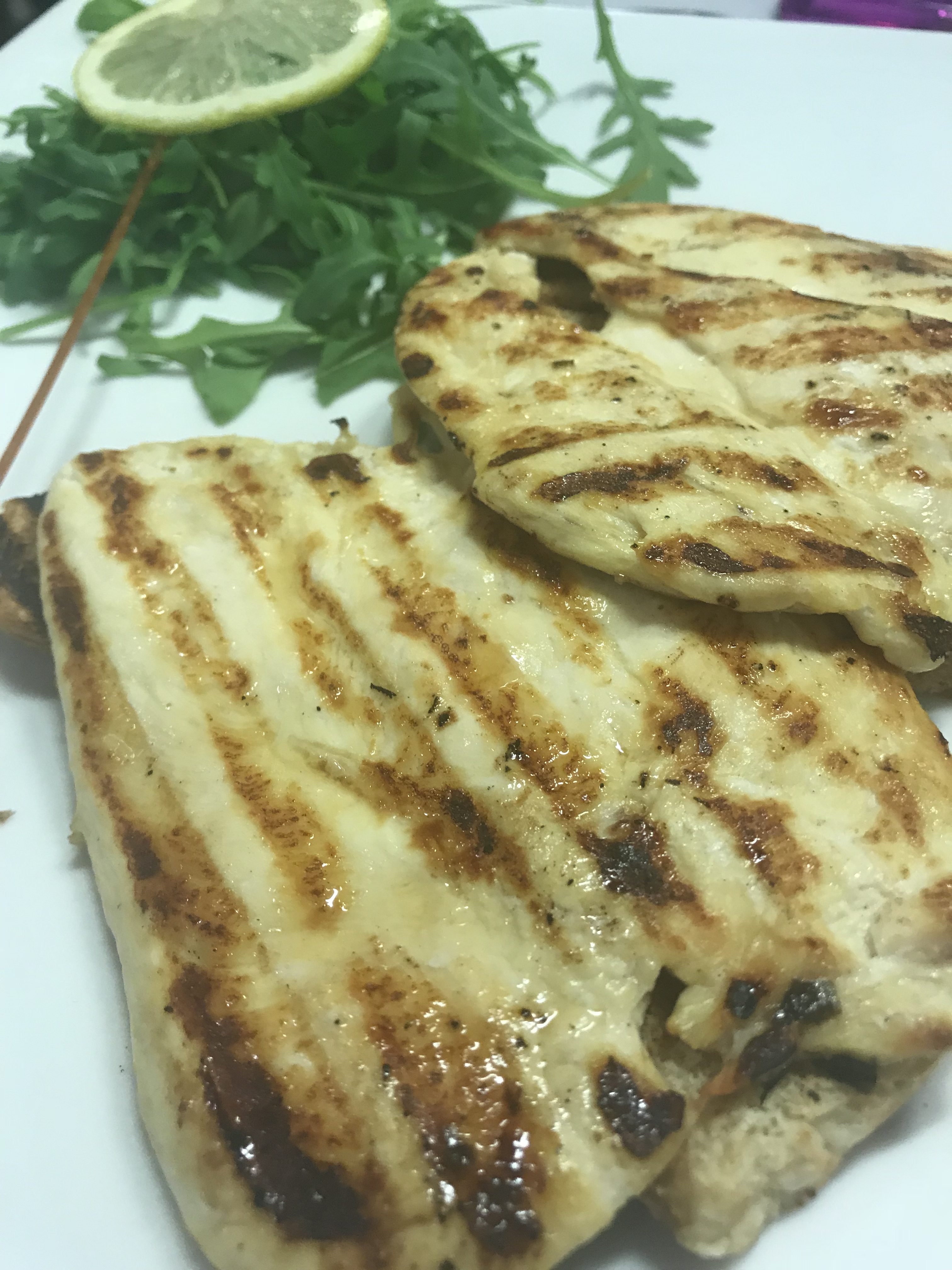 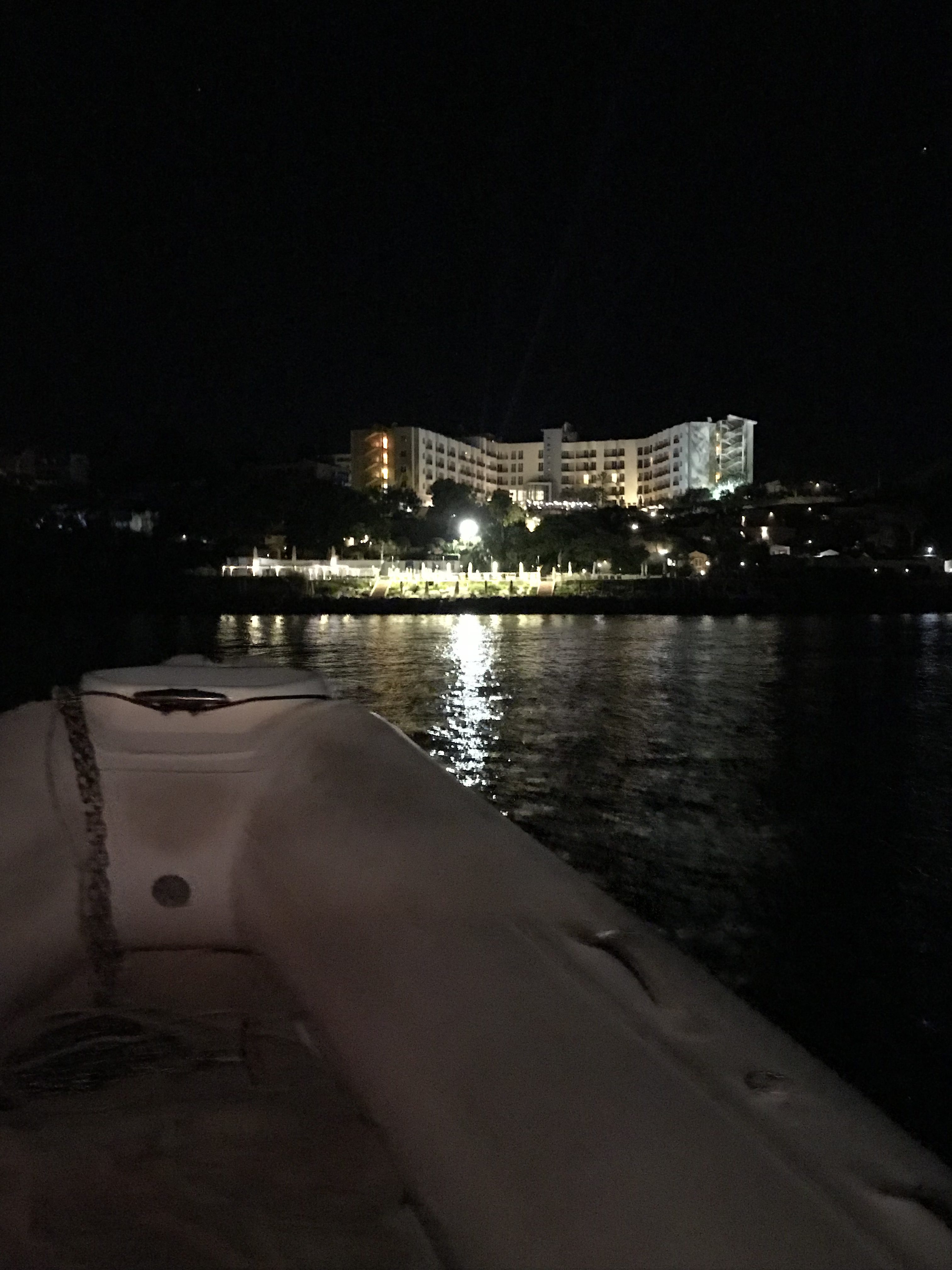 Back to our hotel and the plus side is the stunning outside areas with three salt water swimming pools to choose and sun yourself by. There’s a weird double standard whereby if you’re a member of the D Club – a little bit like a timeshare but with hotels – you can get into the best spots which were cordoned off from other holidays makers. Being Mancs we of course just ignored that and settled where we wanted.

I can imagine when the hotel is full that would be the mother of all sunbed battles, can you imagine seeing an empty lounge behind a cordoned off area and accepting that?

This hotel is being modernised and we got a bargain, but the general consensus was that it was fabulous on the outside having unrivalled views of the beautiful sea and perfect for lazy lapping wave-soothed snoozes, but it left a lot to be desired on the inside. Rooms were tiny, dated and disappointing after the beautiful exterior. 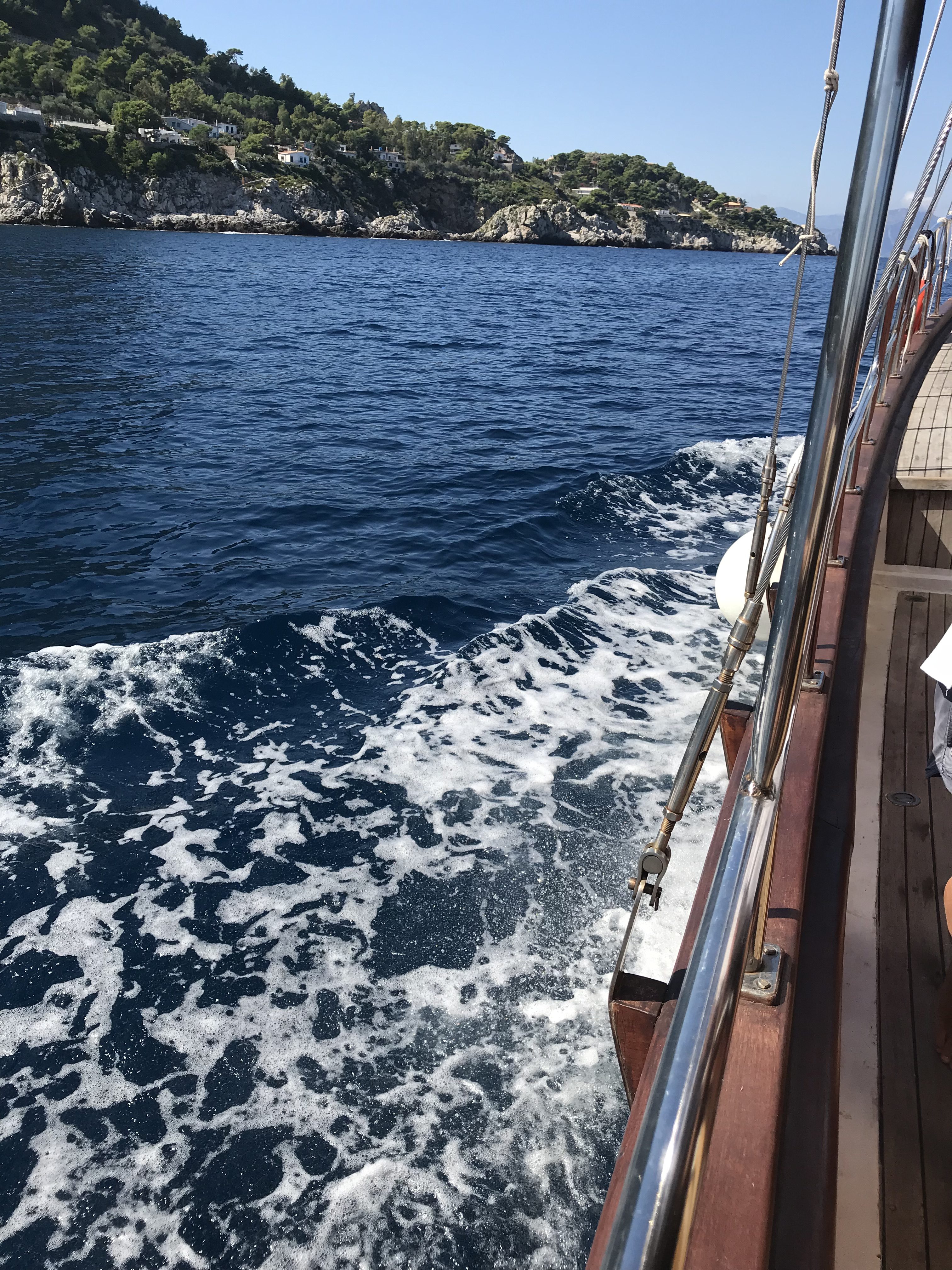 Breakfast broke the rule that you can’t get a bad meal in Italy – you can  – here and at breakfast. It’s served in basically what feels like a dungeon (a crime when you want to eat outside and breathe in the view) and was nearly Fawlty Towers Italian-style in terms of service. The cooked breakfast featured gelatinous eggs and basically grease. Carbs were good, the bread and other pastries great. There was a stand-off over jam when I was refused it as they cleared half an hour before breakfast was officially meant to end. Needless to say, I won but it was a sticky situation (groan).  We’d have phoned down for breakfast, but the phone didn’t work and there was only one chair on the balcony, so we’d have had to take turns.

Perhaps that’s why the front desk staff adopted a penalty-defence stance every time you went near them. Other hotel folk couldn’t do enough for you, such as the happy barmen and Pepe the boat cruise man/come concierge.

Pepe was a joy, nothing was too much trouble and a highlight of our stay – and one thing you must do, is charter a boat or join a charter trip. Just gliding on the silky sea with a glass of something and seeing the beauty around from craggy cliffs, to white dotted chapels and former Mafiosi’ villas, really is  La Dolce Vita. 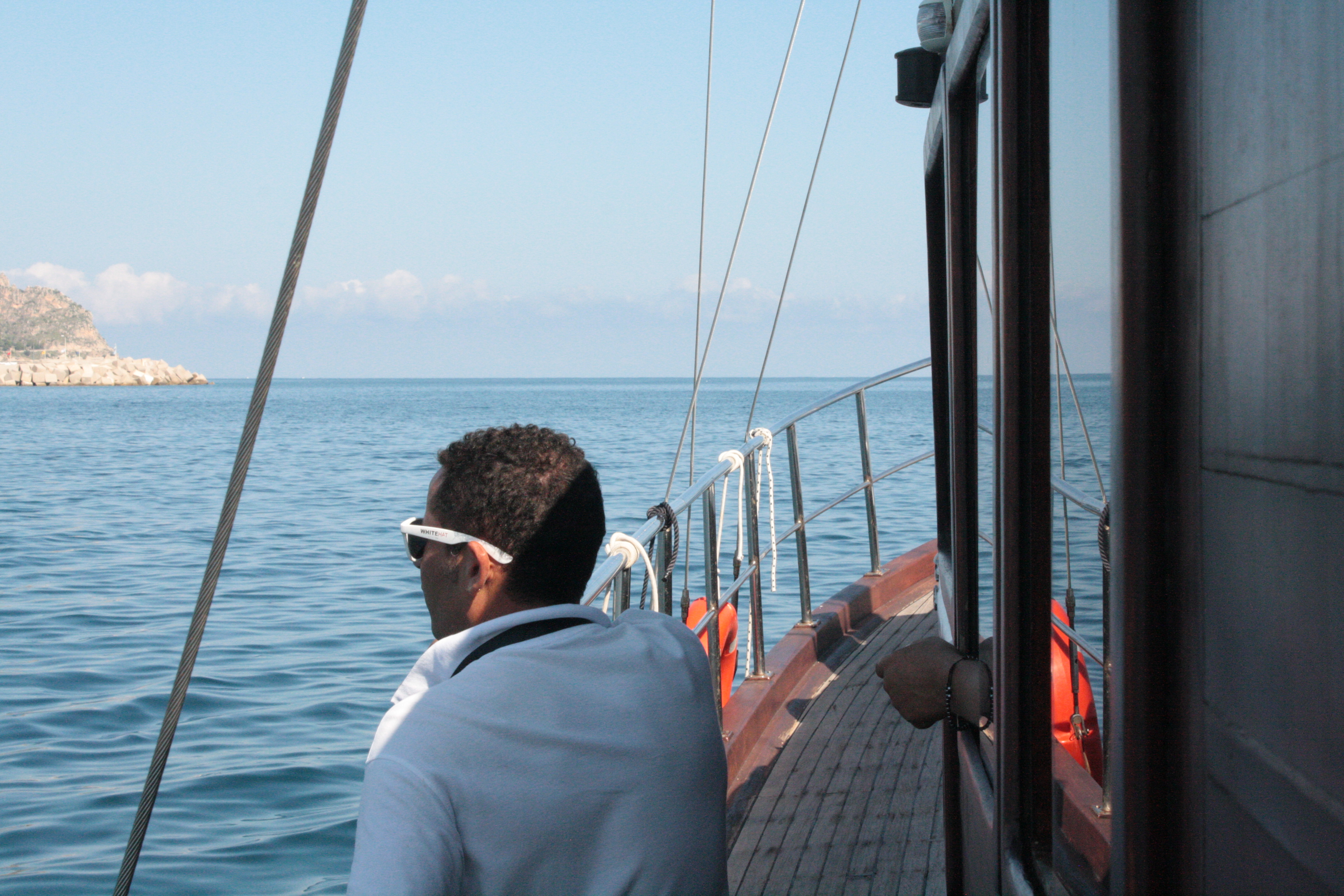 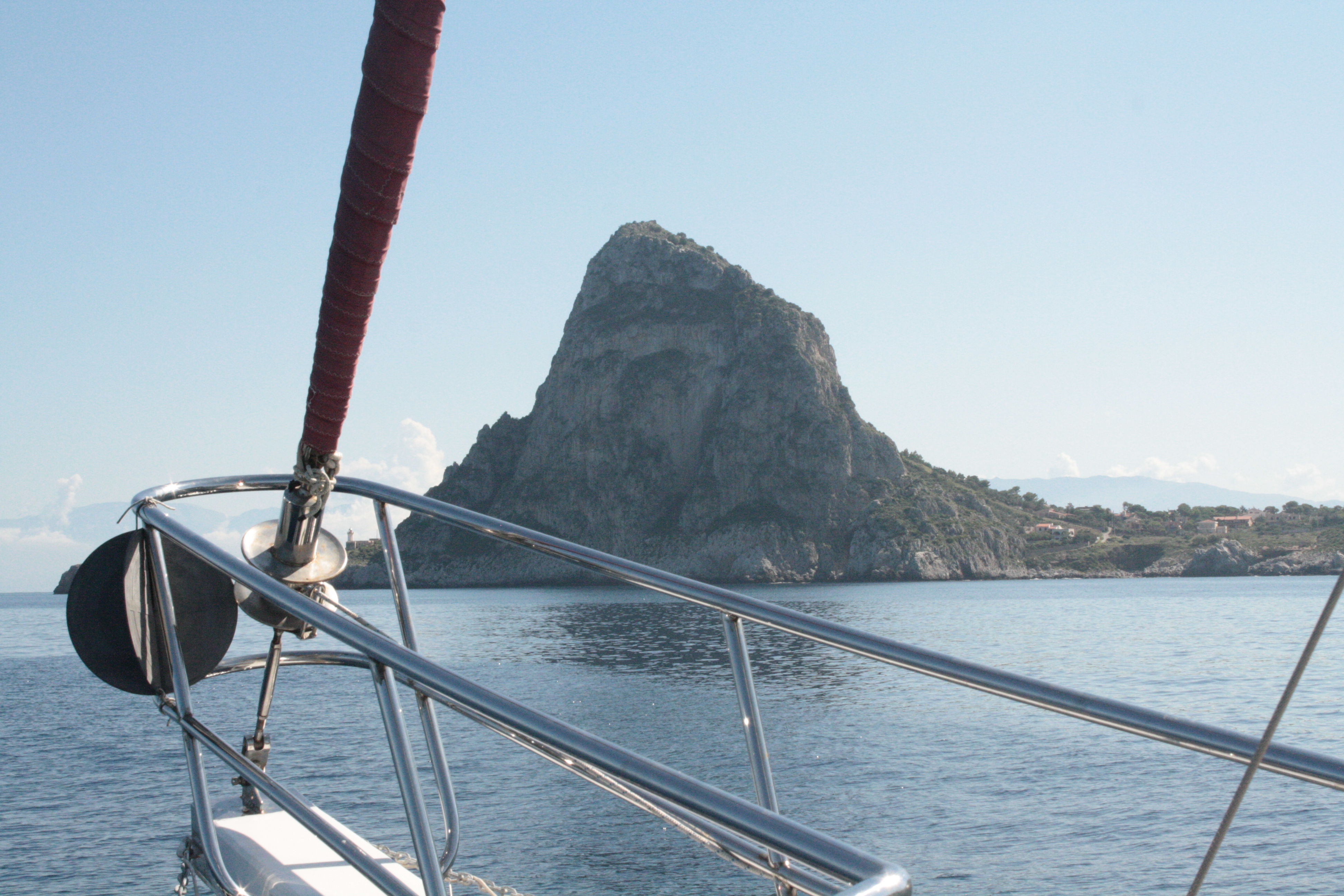 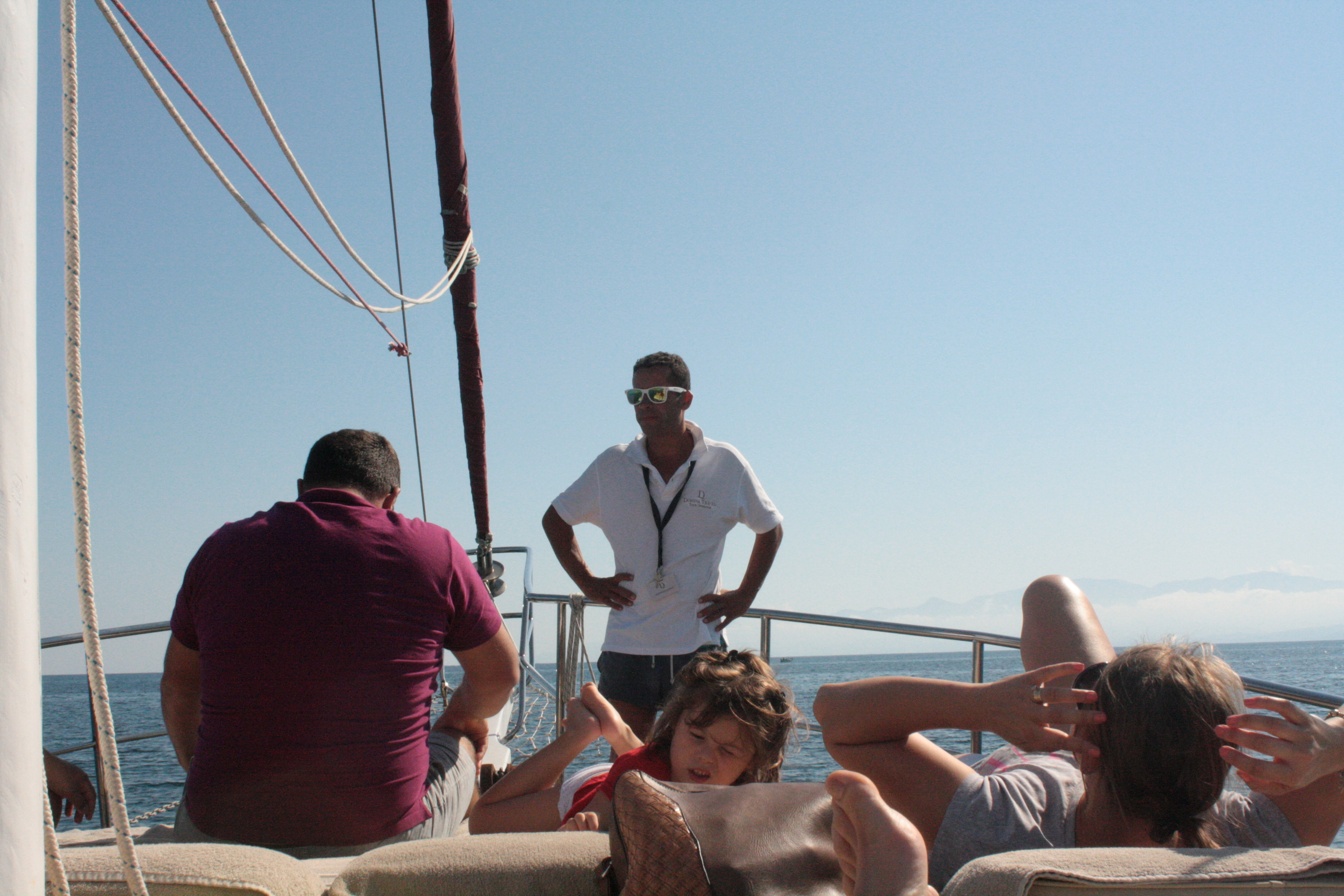 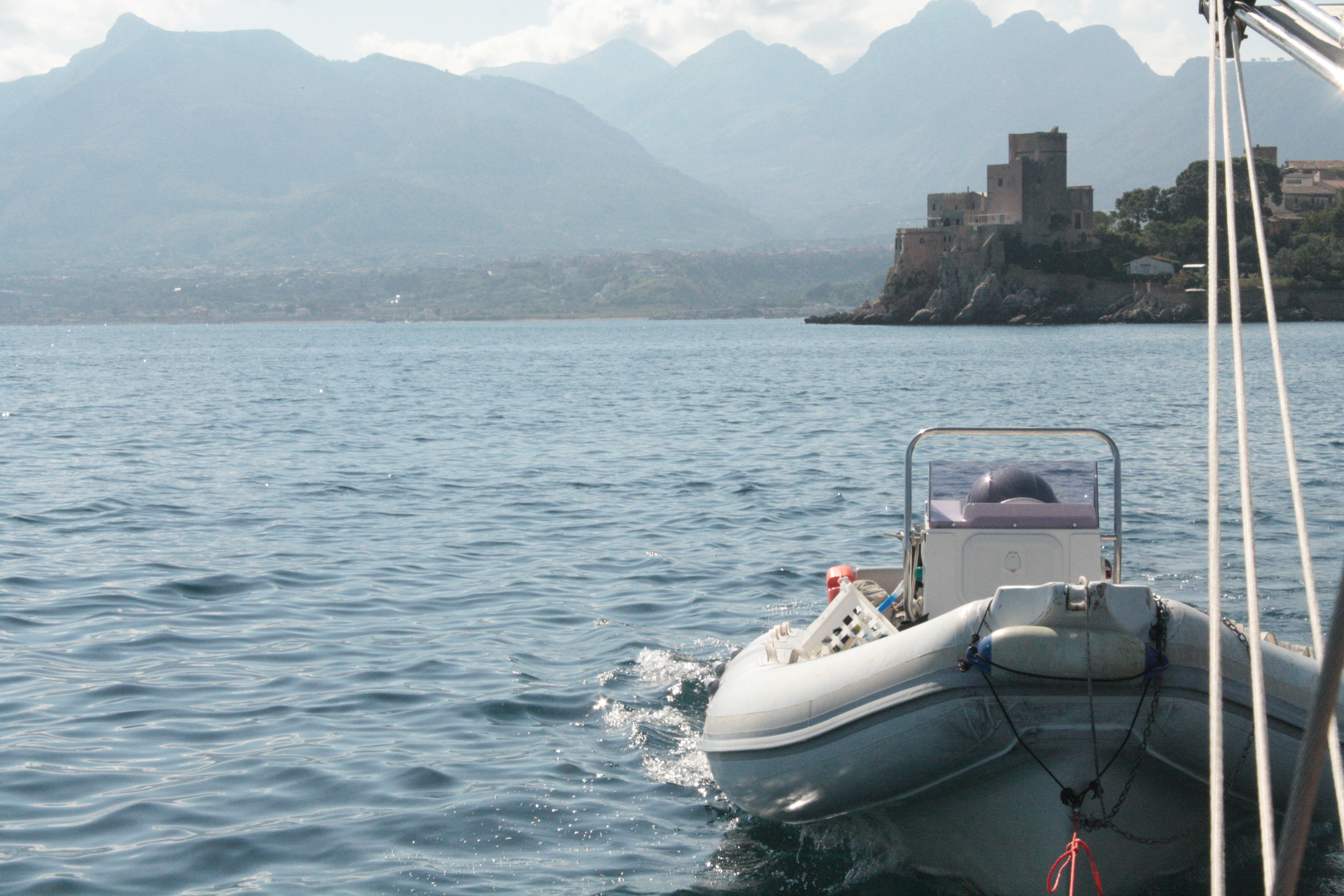 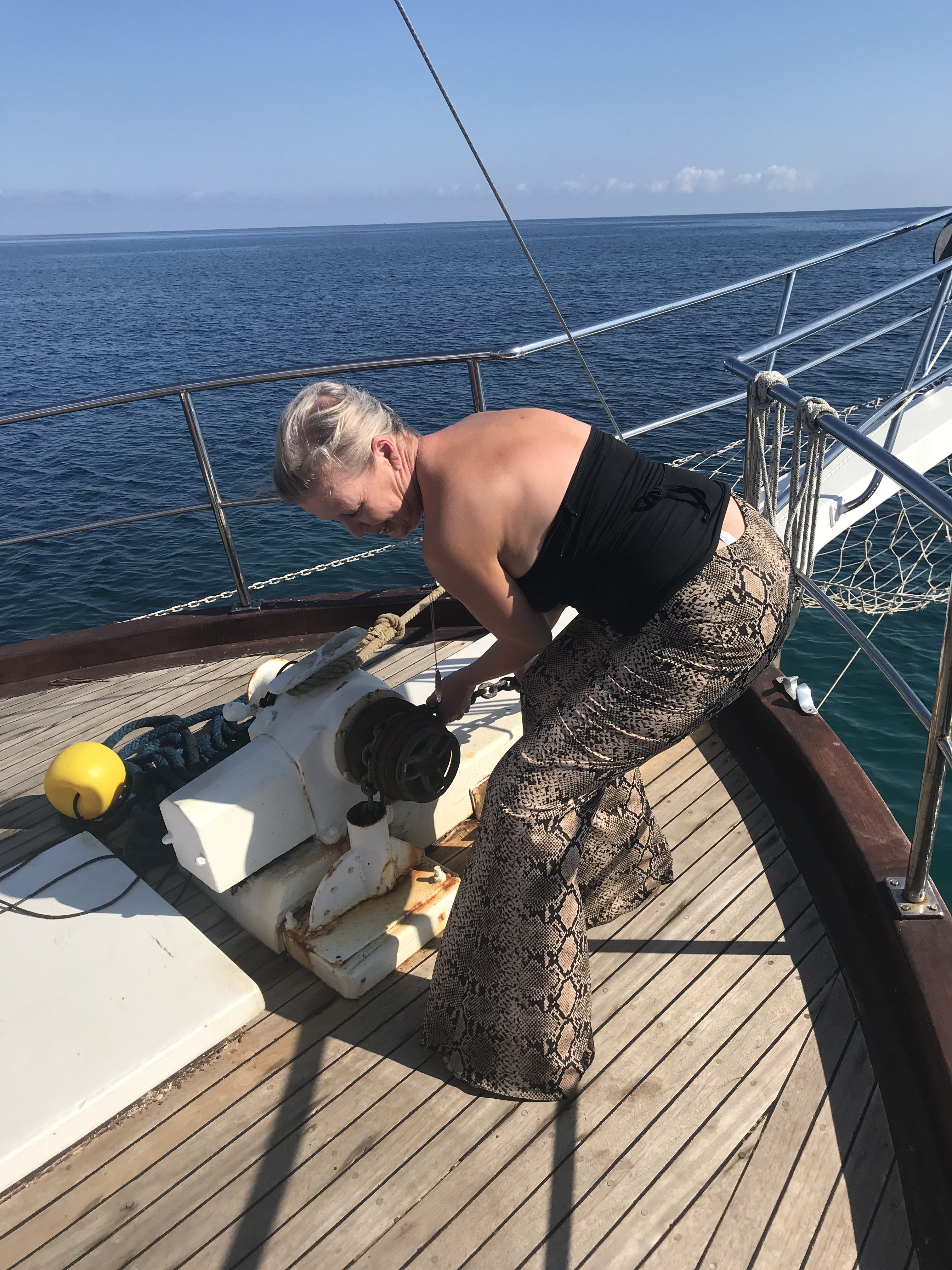 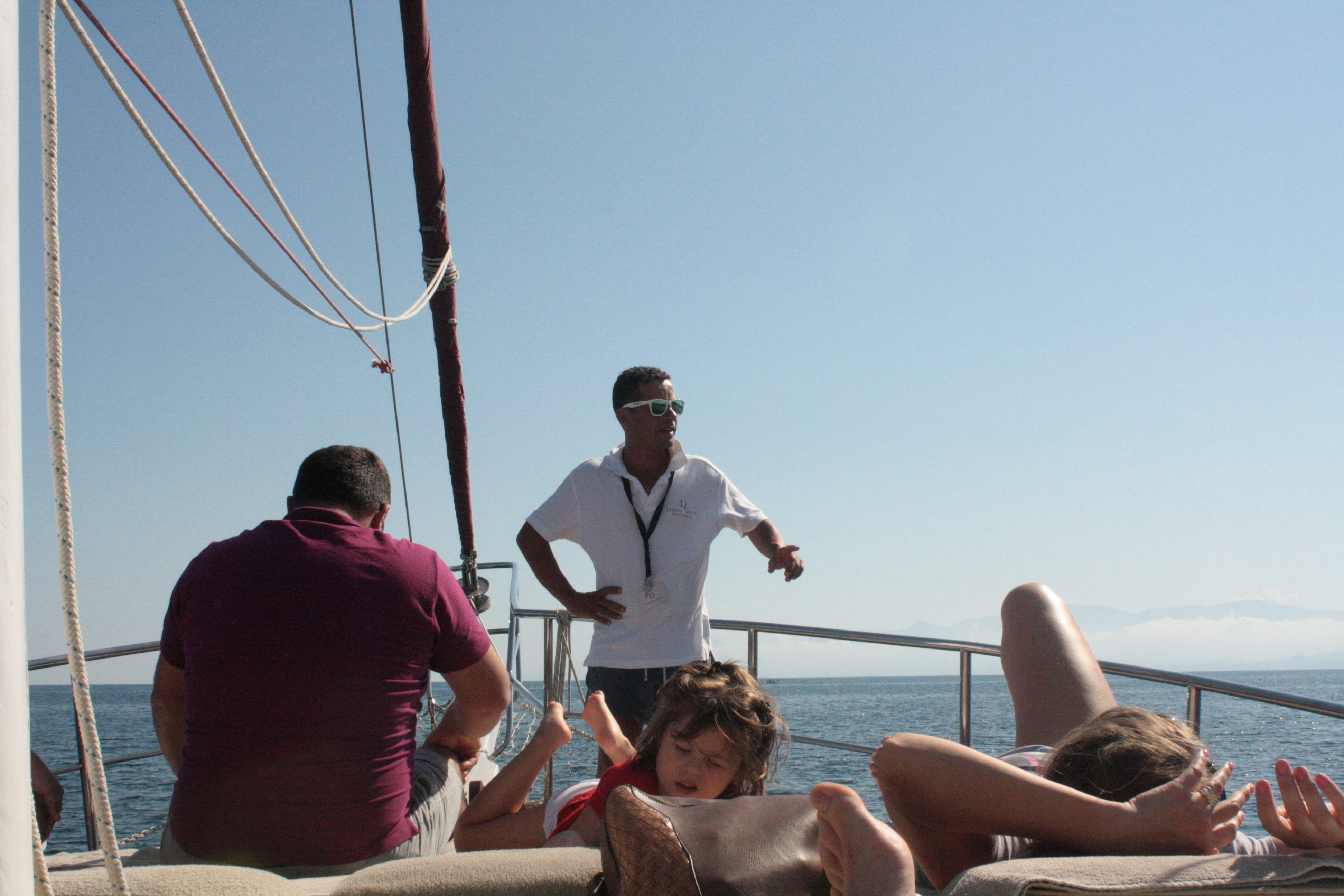 Our trip cost €60 per person and we shared it with six other guests who turned out to be charming company (this could be a worry I guess but for us it was an opportunity to make new friends). Pepe took us on a tour that stretched from Santa Flavia to Palermo, dropping the anchor in glass-like sea so we could splash and frolic in the salty warmth.

Drinks were served, and a typical Sicilian meal of octopus, meats, cheeses antipasti, followed by a huge bowl of pasta and a peach wine type sangria.

Chilled, brown, replete, it was the perfect voyage. 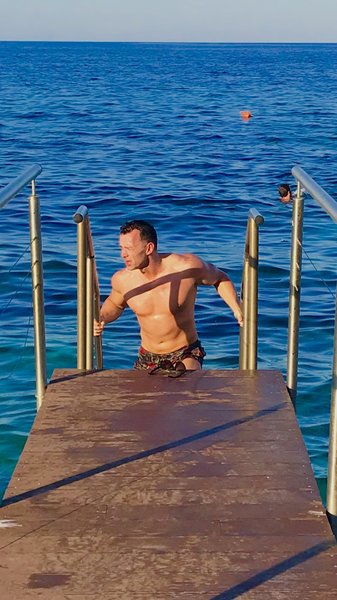