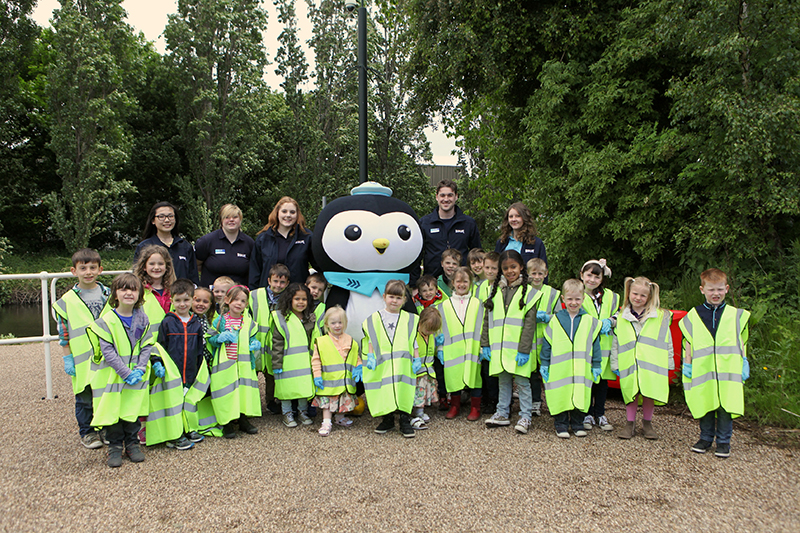 Sea Life Manchester greeted a very special guest to its monthly canal clean up on Thursday 28 May when Peso from the Octonauts joined lots little of volunteers in helping to keep Manchester’s waterways clean.

Eager children and Peso, who’s appearing at Sea Life Manchester along with his Octonauts crew member Captain Barnacles throughout May, managed to remove an impressive 82.3kg of rubbish from the canal during the afternoon clean up.

As well as the clean up with Peso, visitors also took part in the Octonauts Training Academy where they learnt all about how to ‘explore, rescue and protect’ the world’s wonderful sea creatures and the team of aquarists led talks on the importance of looking after marine life and cleaning up rubbish to ensure there long life.

The fun and learning didn’t stop there; there was also badge making sessions for children to create their own Octonauts badge to take home and lots of colouring in. Kids with plenty of energy left headed over to the soft play area before heading into the new CLAWS exhibit meeting the new armoured warriors.

Kids could also take part in the fun interactive game winning points by keeping the sea water safe for Earnie the turtle by getting rid of dangerous objects like speed boats and rubbish bags.

Jonathan Royle, Marketing Manager at Sea Life Manchester said: “Breed, rescue and protect are the foundations of our business, it’s really important that we inspire our future leaders to think and act responsibly and get them to look after our canals, waterways and marine life. This event was a great way for kids to come and have fun during half term and learn lots at the same time.”