Celebrating Christmas 2019 and its festivities in Manchester

Soon it will be Christmas and if you’re in Manchester there is a lot going on throughout the festive season. From the Christmas markets, fabulous shops and endless dining choices.

To get the full Christmas experience, book a weekend visit and stay at the five-star Lowry Hotel with its curved, glass-fronted façade and rooms with stunning views over the River Irwell, its newly refurbished riverside restaurant and a spa.

The theatre for a Christmas pantomime

Tradition dictates that Christmas is the time to visit the theatre for a traditional pantomime. This year, the Manchester Opera House pantomime is the fairy-tale of Snow White and the Seven Dwarfs, starring the Strictly Come Dancing judge we all love to hate, Craig Revel Horwood Wicked Queen, Coronation Street star Eric Potts as Dame Nora Crumble, Ben Nickless as Muddles and Zoe George as Snow White for a spectacular show of dance, comedy and amazing special effects that all the family will enjoy.

The wooden sheds of Manchester’s Christmas markets can be found across multiple sites in the city, from Albert Square to St Ann’s Square. For the first time since the markets began two decades ago, there is also a market at Piccadilly Gardens and other firsts to explore are an ice tiki bar and a snow globe bar.

If you prefer to shop undercover, you can do your last-minute Christmas gift buying at the Trafford Centre complex and city centre shops run by independents, designers or department stores. Alternatively, join the Centre’s Christmas Parade on 16 November for some festive family fun.

The Alpine Village at the Trafford Centre runs throughout the festive season until 5 January, though gift shopping online may be a stress-free way to find the perfect Christmas gift. Eternity Rose has jewellery or a natural rose dipped in gold, silver or platinum for a gift that lasts a lifetime and shows your recipient just how much they mean to you. 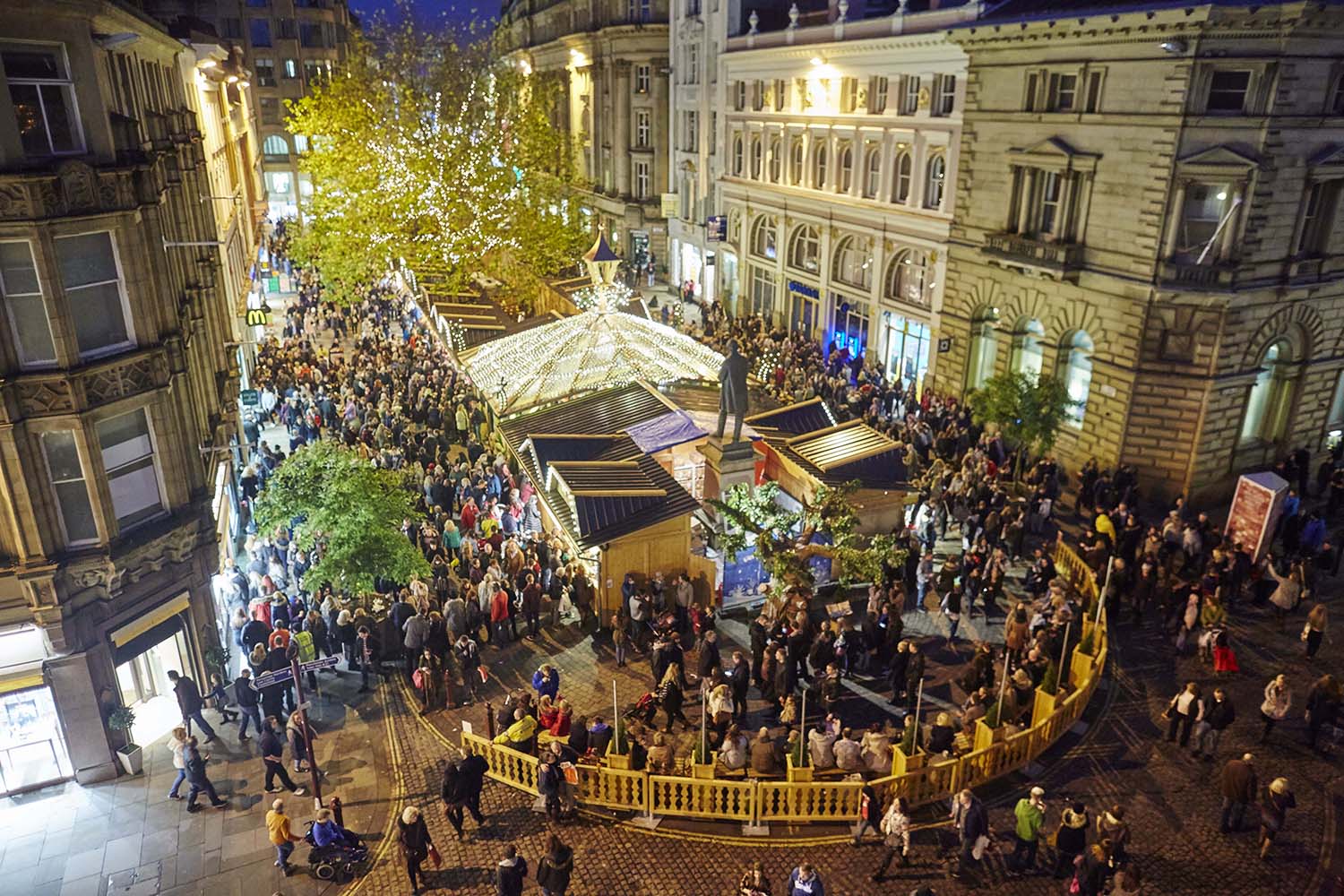 Both classical and popular music styles thrive in Manchester, known as the birthplace of Indie music. Now That’s What I Call Christmas! Live at Bridgewater Hall on 17 December is your chance to sing along to iconic pop classics or Christmas Carols on 24 December.

At the O2 Apollo, you have the choice of tickets in December to see Snow Patrol, Dido, Dermot, Kennedy Melanie Martinez, the legendary comedians Roy Chubby Brown or Rob Beckett and on the Sunday before Christmas, Jools Holland’s Rhythm and Blues Orchestra.

Christmas classics from the Hallé includes its annual performance of Handel’s Messiah, as well as joining forces with our Youth Choir and Children’s Choir for a spectacular trio of traditional Carol Concerts as well as screenings of The Snowman with a live orchestra.

Manchester Cathedral offers a Viennese Christmas concert by candlelight, with St Ann’s Church also offering a candlelight concert by the Piccadilly Sinfonietta, one of the UK’s most exciting young ensembles

From Rusholme’s curry mile to well-established chains in the city centre, Manchester is home to culinary delights. Christmas menus are readily available, from Italian food at Rosso’s, a British menu at 20 Stories which is next door to the Opera House and showcases the best of the Northwest for this festive season, including snow globes on their rooftop terrace. Chinese sharing menus at Tattu includes popular and innovative dishes for Christmas or try Indian food from Asha’s, a restaurant worthy of any celebration.

Manchester Cathedral will have a service on Christmas Day morning, but apart from a few general stores, there is not much open on Christmas Day. However, with streets deserted, this is the best time to admire Manchester’s architecture, from the gothic John Rylands Library on Deansgate, the Town Hall at Alberts Square or a walk around the Canals in the Castlefield area on a clear or snowy day.

The Old Trafford Stadium is less than two miles out of city centre and will be deserted on Christmas Day, yet it is fascinating to walk around to see the statues of Best, Law, Charlton & Ferguson, the Munich Clock and Memorial, Munich Tunnel and more.

Take a break from some of the festivities to take in some of Manchester’s history and culture. The Lowry museum contains many examples of Manchester’s LS Lowry. The National Football Museum has an exhibition running over Christmas called “Strip! How football got shirty” that looks at fashion, design and technology through the ages, from the heavy woollen jerseys of the Victorian era to the heavily branded polyester of today.

Manchester Art Gallery’s “Out of the Crate” that runs from 7 November looks behind the scenes of its sculpture collection, whilst the People’s History Museum has the last few weeks of its 2019 Banner Display, an exhibition that reflects key moments of protest in Greater Manchester and across Britain, from the Peterloo Massacre in Manchester in 1819 to present day.