Could You Demolish This Freakshake? Try Your Luck At The New Black Milk Cereal Drive On Oldham Street

Black Milk Cereal Drive has recently opened their second outlet in Manchester, expanding from a store in Afflecks Palace to another café on Oldham Street.

Around two years ago, Black Milk Cereal Drive became the first cereal café to hit Manchester in Afflecks Palace. Boasting extravagant cereal combinations, visitors drooled over their menu. Now with a store on Oldham Street, it’s not only their cereals that the café is becoming notoriously famous for… 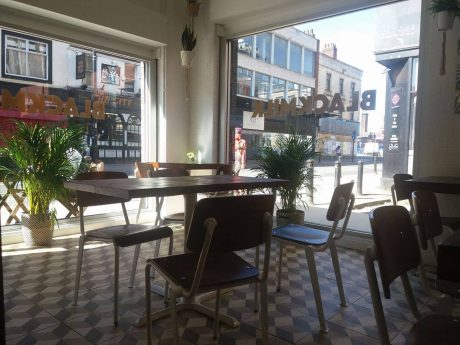 Taking over the old V Revs store, the founders of the café have opted for a botanical theme to the new café, explaining that they wanted the café to be an ‘escape from the city’. Alongside new interiors comes a new and improved menu- featuring some healthy- yet still as equally tasty options, including the smoothie bowl and fresh fruit smoothies.

But for the classic indulgence that Black Milk Cereal Drive offers, word has spread like wild fire of the Freakshakes that the café offers- a super thick and rich milkshake, topped with cream and an ACTUAL cake, yes, you heard right.

Ordering the Triple Oreo Cheesecake Freakshake, the menu states that the drinks are all freshly made to order, so may take a little longer to arrive. After around five minutes from ordering, the milkshakes arrived- and they were certainly a work of art.

The Triple Oreo Cheesecake Freakshake consists of an Oreo milkshake made with ice cream, topped with lashings of whipped cream and a generous slice of homemade Oreo Cheesecake. Other Freakshakes include Marshmallow Rodeo and Sticky Toffee Brownie pudding- all super indulgent and definitely the kind of shakes for the sweet-toothed. 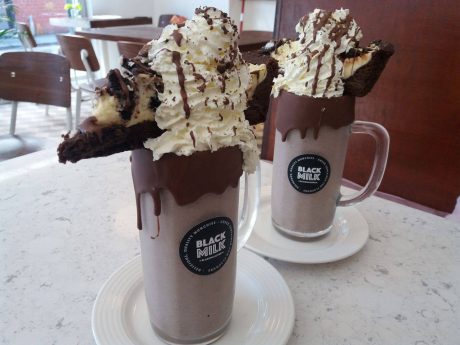 After tucking into the delicious cheesecake with a sticky Oreo base and chunks of Oreo in the cake, I moved onto the next mission- drinking the milkshake. It did become a mission, as the Freakshake become extremely filling extremely quickly.