A brand new culture initiative which will see one town in the city-region awarded Greater Manchester Town of Culture status, will be presented to leaders today at this month’s Greater Manchester Combined Authority (GMCA) meeting.

The trailblazing Town of Culture competition which will be awarded to one dynamic town within the city-region, committed to reinvigorating and reinforcing cultural offerings for residents.

The annual accolade will highlight the distinctive creativity and diversity of one of Greater Manchester’s many towns, putting a spotlight on the remarkable art, culture and heritage that exists across Greater Manchester.

Greater Manchester is known globally for its significant contribution to culture, and every part of Greater Manchester has many culturally rich neighbourhoods, all of which are unique to that particular place.

To enter, local authorities can submit a proposal for one town within their borough. This doesn’t have to be a town in the traditional sense, it can be any area or grouping of places with a shared identity and vision where the local community could be deserving of the award.

The award is based on the UK City of Culture concept, which was introduced in 2009 by Greater Manchester Mayor, Andy Burnham, when he was Culture Secretary, built on the success of Liverpool’s year as European Capital of Culture in 2008. 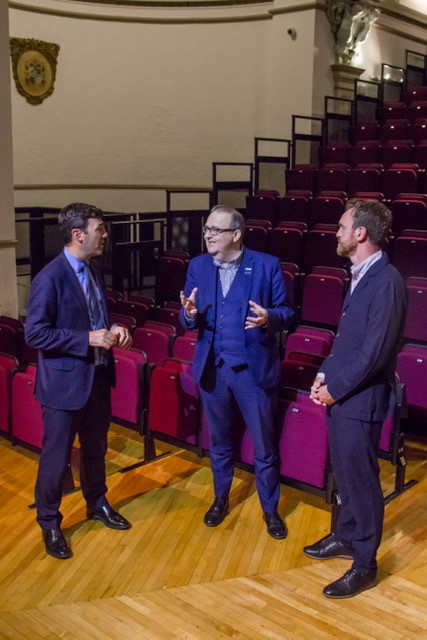 Previous winners of City of Culture saw their local economy boosted significantly, with increased investment, media interest and tens of thousands of new visitors to the areas.  The GMCA hopes to replicate this prosperous economic impact for one of their towns, every year.

Lisa is also the co-founder of the think tank organisation Centre for Towns, which was set up to serve as an advocate for towns, and facilitate wider research into the cultural and economic needs of these communities.

The winning town will be revealed in December 2019, and receive £50,000 to develop and programme exciting events and activities that celebrate the identity of that place.  For example this could be festivals, family days, concerts, exhibitions and opportunities to explore, reflect on and enjoy the heritage of the area.

The Greater Manchester Town of Culture launch was held in one of the fastest growing arts and cultural areas in the city-region – Bury –   at the multi award winning arts venue ‘The Met’, one of the main places to go locally in Bury for music, theatre and comedy.

Mayor of Greater Manchester, Andy Burnham, said: “We are serious about bringing greater impetus to our proud towns. They have far more potential than we often realise.

“The distinct culture of our towns is something to reward, and Town of Culture allows us to put a spotlight on one local area with vision and commitment to broaden cultural contributions.

“Greater Manchester is a vibrant city-region, known around the world for our music, artists and cultural venues.

“Our cities have an amazing cultural offering but our towns also have history, culture, character, connection and community. The Town of Culture award is an opportunity for any place to develop and strengthen their identity,

“The winning place will have a standout entry, demonstrate vision, and long term ambitions for the culture within the town. We know it’s there, and we want to celebrate it. ”

Lisa Nandy MP said: “The towns across the Greater Manchester region have our own unique cultures and histories which are a huge source of pride and deserve to be celebrated. The Town of Culture is a major commitment from Greater Manchester’s leaders that we will celebrate and support the great diversity and strong local identities across our region.

“Throughout our history, towns in Greater Manchester have made major contributions to arts, heritage, music and culture. This is a chance to showcase some of that to the world. I am proud to be part of it.”

Councillor David Greenhalgh, GMCA Lead for Culture said: “Culture is at the heart of all our communities. This award will significantly raise the profile of one town every year as a ‘go to’ destination.

“From Wythenshawe to Weaste or from Pemberton to Prestwich, there are remarkable social institutions, arts, heritage and customs thriving in all those areas.”