E.M.A asks Kill Bill what it takes to be a Garage MC!

I’ve been in Bali two whole months now and life is pretty bloody good over here! The sun is shining, and the music scene is vibing, plus I’ve been meeting some amazing and interesting characters living it up in paradise too, one being Garage MC and DJ… Kill Bill.

I got chatting to Billy Bilman aka Kill Bill after his set at Backyards in Canggu and asked the cheeky chap, originally from London, what it takes to be a Garage MC… 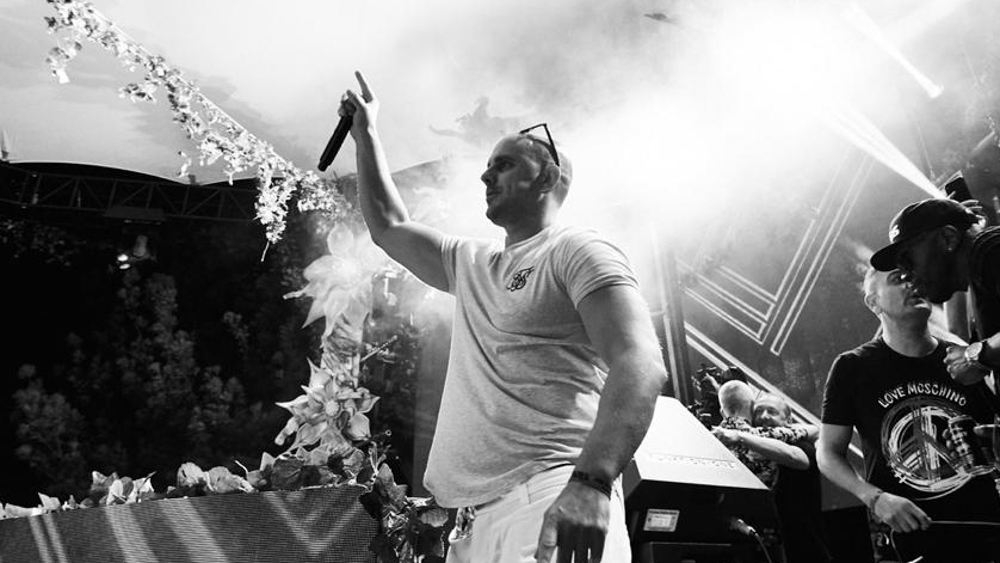 E.M.A: What brings you to Bali?

Kill Bill: I’ve been out here playing at a couple of parties and also managed to tie it in with one of my mates’ birthdays.

I’ve been DJing at Tropicola for the first time, back to back with Scottish DJ Joshua D, it was mad vibes, loved it! Anyone visiting Bali I highly recommend you go to Tropicola’s Tuesday Pool Party, I’ll be back playing there in February.

I also played at my mate Emjay’s birthday bash and headlined Saturday night at Backyards, again mad vibes, wicked venue, everyone was there for a good time. 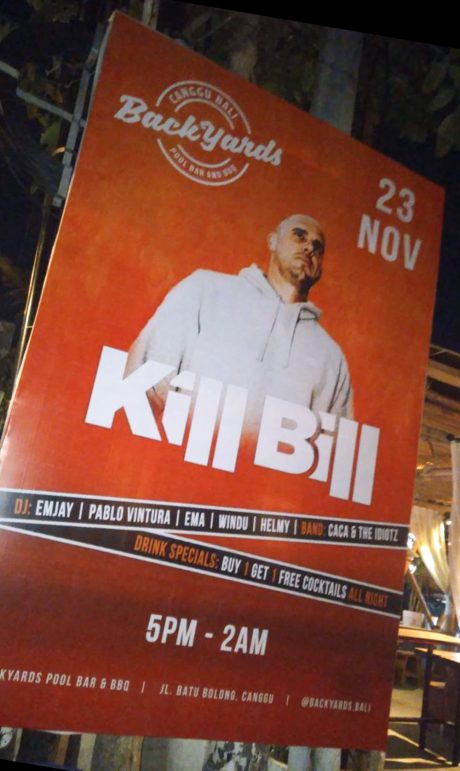 Then ended my two weeks here on a five-day party bender for my mate’s birthday!

E.M.A: Nice! And I do believe before getting to Bali you’ve been on ‘It’s The Ship’, Asia’s largest festival at Sea. Tell me a bit about this party ship and any ‘out at sea’ gossip?

Kill Bill: Oh my days this is the sickest event I’ve ever been to! It was the first time I’d been on a cruise ship and we were lucky that the sea was calm. The ship is twenty stories high, has five stages and none stop parties, 24-hour buffet, Mr Whippy on tap (one day I think I went down there six times for food).

The production and management were amazing and a massive big up to my boy DJ Tenzin for taking me onboard with him, plus shout out to Kate Fox who let me jump on her set for a bit of an MC session.

Next year I hear they are doing three to China, Singapore and South Carre so I’m hoping to get back on board!

You’re originally from the UK but now living in Oz, how did you end up living on this side of the world?

Kill Bill: I’ve been working seasons abroad now since 2005. My first taste of it was when I was 17 years old, I went on an 18-30’s trip to Ibiza, took my mixtapes and started speaking to people to see what they were doing next. A lot of the workers out there were saying they were flying to Australia after the Ibiza season had finished. So, within 10min of sitting in a bar talking about it I was going to Sydney, crashed on a mate’s sofa for the first few months until I found my feet. Ten years later and I’m still here!

Throughout those ten years I was in Thailand DJing and MCing and I’m still chasing other countries for gigs, the buzz is always there! 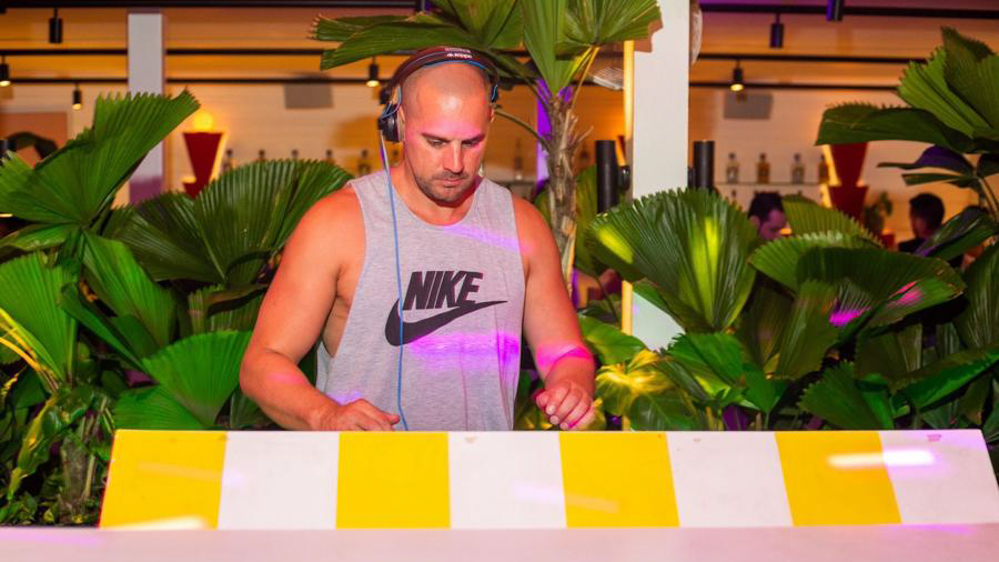 E.M.A: What’s your show all about on Bondi Beach radio station?

Kill Bill: This is my little gem! I grow up on pirate radio stations back in the UK airing illegally from someone’s kitchen in a council estate, so I’ve always had the buzz for radio.

But Bondi Beach radio studio is amazing with top end equipment airing legally online with people from around the world tuning in every day. I’ve got my own show 4-6pm every Saturday and I’ve also just become studio manager.

E.M.A: As well as DJing you’re an MC on the Garage scene and have been supporting the likes of  DJ Luck and MC Neat. I absolutely love these guys, they take me back to raving in my youth days, what are they like in person and how did it come about you touring with them?

Kill Bill: Mike and Joel are absolute legends, I grew up listening to these guys along with Artful Dodger, So Solid Crew and Pied Piper and now I’ve been on tour with them all and consider them my mates it’s just madness plus they are all such down to earth people.

How it all came about is since being in Oz I met a couple of guys called Gaz Geeza and Essex Stu. We started doing little Garage parties to 200-300 people and as time went on the parties got bigger and bigger, then Brad O’Brian got involved who was touring with DJ Luck, MC Neat and Artful Dodger, the boys all teamed up to take over the Garage Nation Australian brand. From then on, we’ve all been touring together out in Oz, it’s been such an amazing experience and a right laugh, so big up to 82 Entertainment. 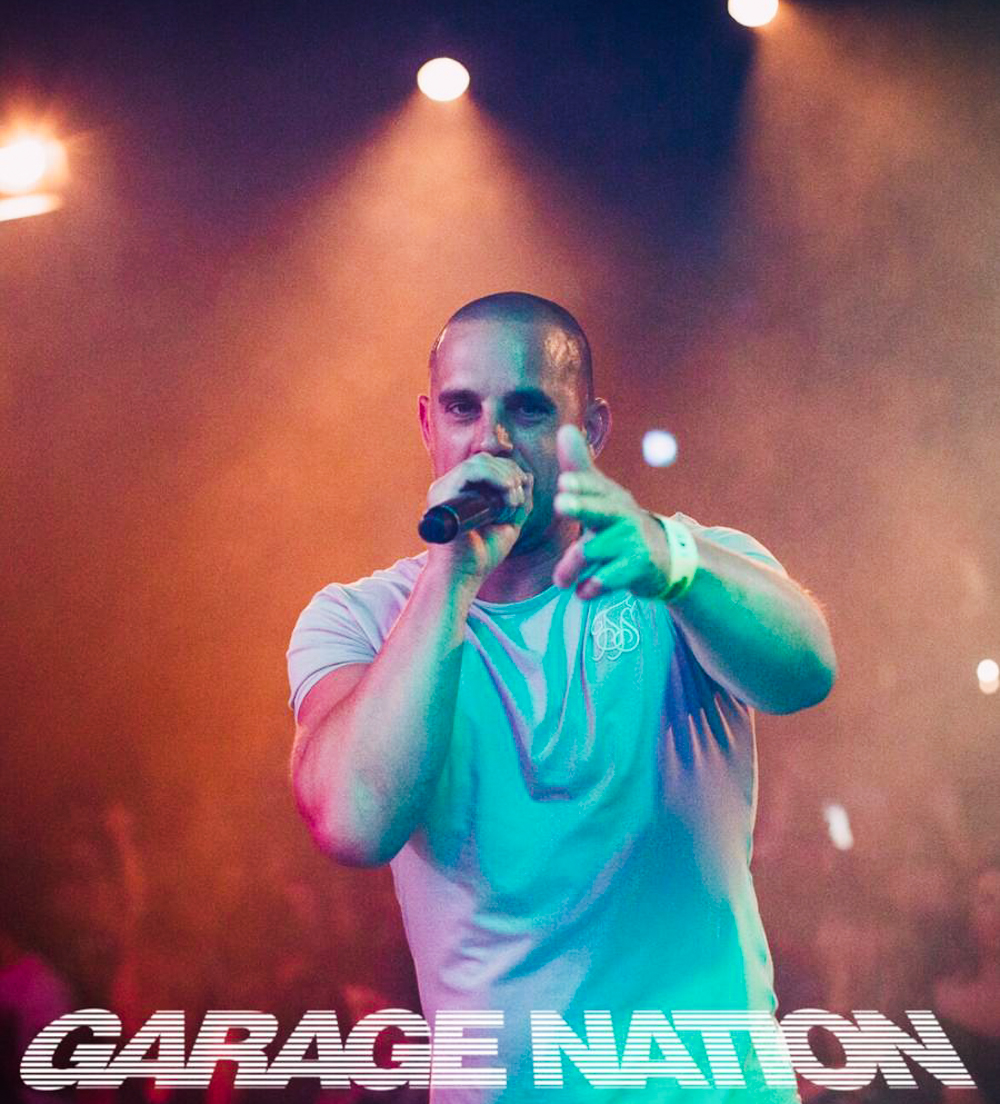 E.M.A: The Garage scene also reminds me of Craig David ha-ha! Have you ever come across him on your DJ/MC travels?

Kill Bill: This is one person I haven’t met yet, but I hope to someday. He’s taken it to the next level though worldwide, he’ll be out in Australia in February at Electric Gardens, so hopefully I get to hang out with him there or maybe Ibiza next year.

E.M.A: Cool! I’ll be expecting a picture via whats-app of you guys hangout and you can tell Craig I saw him at Glastonbury 2017 on the Pyramid stage, and I started crying! ha-ha!

Garage was so big back in the 90’s but you don’t really hear much about that genre anymore, do you think it will ever have a come back into the limelight again?

Kill Bill: I mean some of the tunes I play which get the biggest reaction are like 20 years old, they are the classics but there’s a new wave coming through now like Future House and RnBass, it’s like Garage slowed down giving it a more broad verity, a mix of Garage and House beats which is open to everyone.

But old skool Garage is never going to die and I like to play a mix of the old stuff and new in my sets, and ya I think Garage is on a comeback now in the new wave. 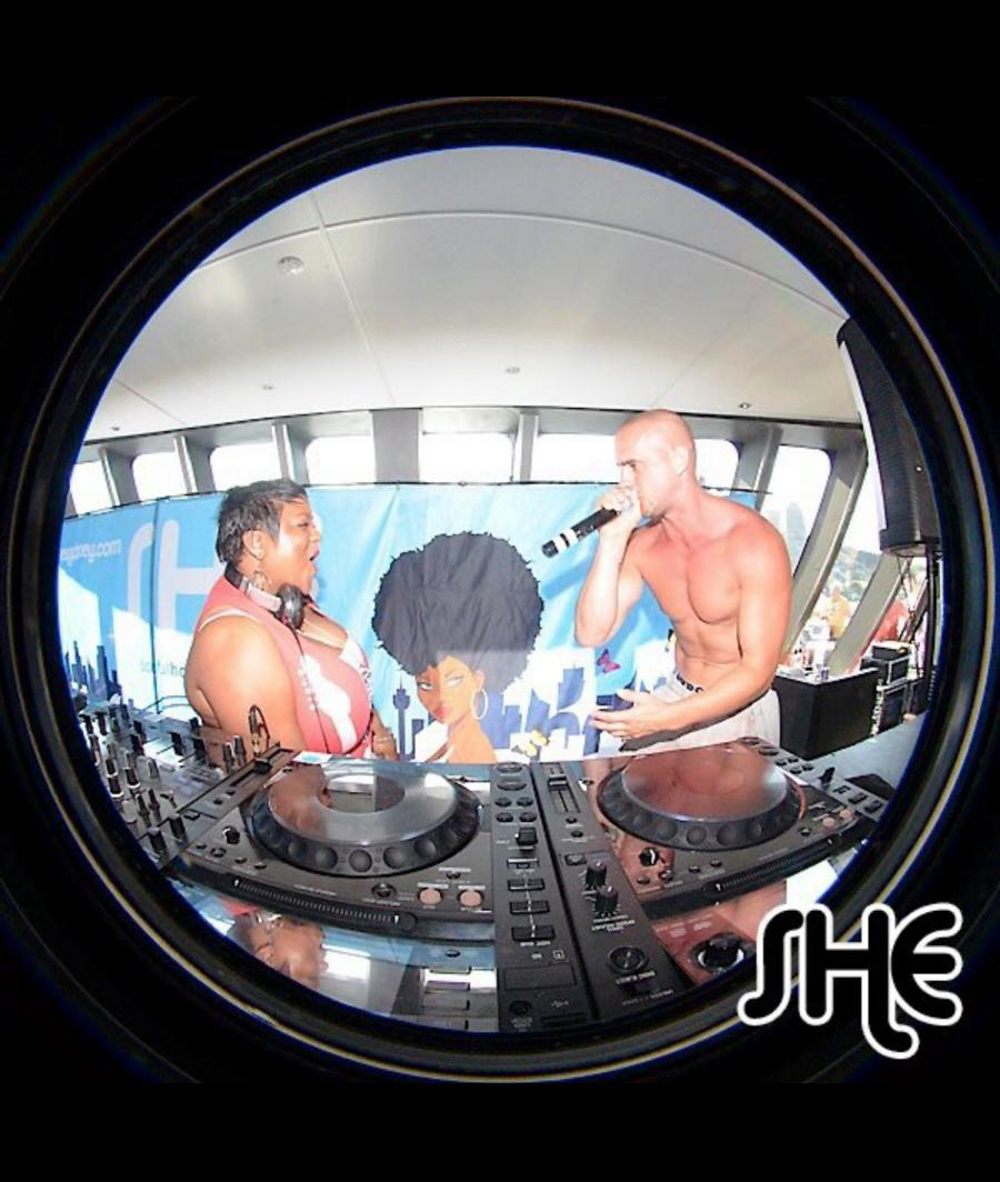 E.M.A: I saw your DJ/MC name used to be called Bilman why the change to Kill Bill?

Kill Bill: I’ve been Bilman since the first time I ever MC at an under 16-night club, I was 11 years old. Then in 2016 I toured with So Solid Crew, and each show I did, I just seemed to get better and better. At the end of the last date I grabbed the mic and MC’d an acapella and got a massive standing ovation. I remember Harvey and all the guys from So Solid came running over saying… that was absolute madness, then Harvey said from now on you are Kill Bill, so big up to my boy Harvey for renaming me!

E.M.A: There’s some pretty kick ass girls in Kill Bill the movie, out of the following who would you kiss, marry or kill…

The Bride (played by Uma Thurman)

Kill Bill: To be honest I’ve never watched Kill Bill the movie, but I think Uma Thurman is pretty peng, so I’d kiss and marry her and if anyone got in the way I’d kill them!

E.M.A: Hahaha brilliant! So, you said you started MCing when you were 11 years old, you’ve been in this music industry for a pretty long time then and seen a lot of talent come and go! Who’s on your radar at the moment?

Kill Bill: I’m going to be working with a new young producer called DJ MB, he’s only 20 years old and some of the tracks he’s making are unreal, he’s actually moving to mine in Sydney next month, we’re going to be making music every day of the week and gonna take over the world so watch this space! 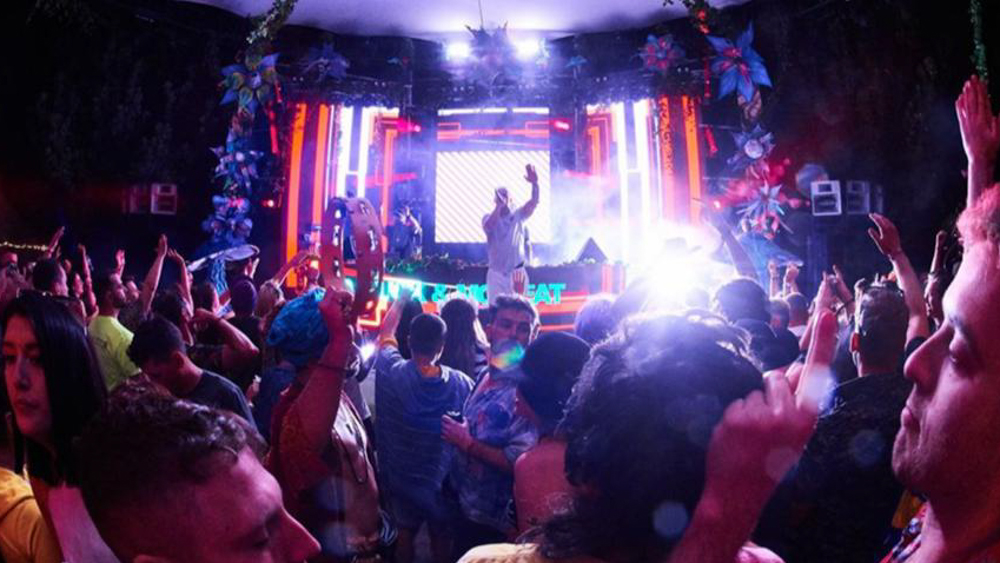 E.M.A: What’s install for Kill Bill over Christmas? And plans for next year?

Kill Bill: I’m literally flat out now, I’m playing a load of RnB and HipHop sets, which is another genre I love, in Sydney at Flamingo Lounge. I’ve got some boat parties and also playing Home Club at Darwin Harbour, a massive Christmas Eve party at Ivy Pool Party, and NYE a big festival in Dudley Park though Bondi Beach Radio.

New Year’s Day I’ve got off and I’m going to a big festival called Fields Day so that should be fun. January roster will be coming in soon so look out for dates on my social media.

E.M.A: Saw on your what’s app intro it says… get rich or keep trying, are you rich yet or still trying?

Kill Bill: Ha-ha! The thing is when I do get rich, I’ll still be trying. For me it’s all about hitting new levels and reaching new goals, I’ll never stop, it’s the hunger of pushing myself to be my best and to help people along the way.