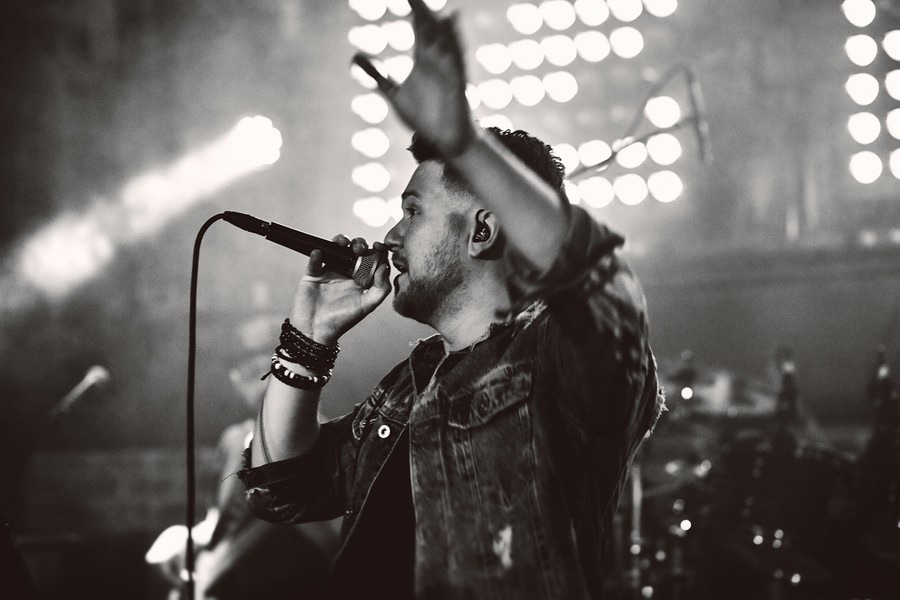 It has been a while since my last music column from Bali, but I’m back, it’s 2021 and I can see the light at the end of this pandemic tunnel.

In fact, it’s a new year and new country as I’ve landed in the almighty city of Dubai on a mission to scope out the epic music scene here.

This incredible man-made city in the golden desert has a thriving scene and a new beach club called Bla Bla where I met the entertainment and productions director John Marques.

John is also in a popular pop/rock band called ‘About Last Night’ and has been rocking the Dubai music scene, with his girlfriend Emily and three other members of the band, for the last four years.

John and his band are taking pop culture to all sorts of other levels, adding a bit of punk, rock and 80’s elements across Dubai calling their sound ‘Augmented Pop’ with their cyber punk look.

It was an absolute must I chatted to John for my first Dubai music column plus he’s originally from Macclesfield in Cheshire, it just couldn’t have been a more perfect meet… 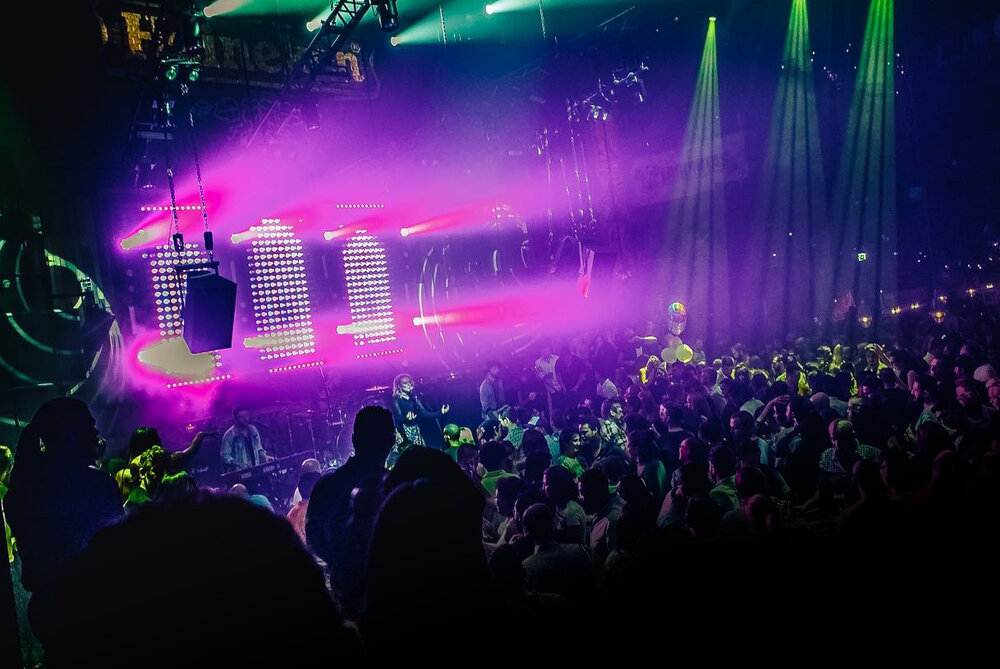 E.M.A: Where are you originally from?

John: I’m from Macclesfield in Cheshire but I grow up in Portugal my Father is Portuguese but then my parents brought me back to England to a little village called Bollington and then I moved to Dubai four years ago in 2017.

E.M.A: You’re in a very cool band over here called, ‘About Last Night’, did you have a band back in the UK?

John: Yes, I’ve always been in the music industry I actually started in theatre music when I was a kid doing multiple tours and shows such as ‘Oliver’ plus ‘Joseph and The Amazing Technicolor Dreamcoat’ and ended up in the West End for two years. After this I played in a band for Disney on a cruise ship.

Then I decided to open a bar in Macclesfield called ‘Cabin 5150’ which is the name of a Van Halen album, and it was the number of my room on the cruise ship 5150. I’m a big fan of Van Halen and got to play at Sammy Hagar bar ‘Cabo Wabo’ on the island of San Lucas, so it all just added up.

John: Myself and two friends made it into a 200-capacity live music venue with this amazing sound system and lighting rig, plus this was the first time I’d put together a house band. It used to fill up at the weekends and we had some big bands and artists from around the world come over and play including Midge Ure, Deborah Bonham (Jon Bonham’s sister), Willie Nile, and Jon Gomm. We just wanted to make a music venue for musicians by musicians, and people got wind that it was a great venue to play, we actually got compared to Ronnie Scott’s of the North.

E.M.A: What made you pack up and come to Dubai?

John: I wanted to do what we were doing on the cruise ships but on a bigger scale and on land to a more party crowd. I’d been told about the music scene in Dubai by another artist that I’d met on the ships which intrigued me, so myself and my girlfriend Emily set out to put a seven-piece band together that would work in the Dubai hotels.

We started out at a place called Rock Bottom and playing corporate gigs, we were up for some awards with ‘What’s On’ and really started to make a name for ourselves. Then it all changed for us when we walked into Lock, Stock & Barrel, we watch a band called ’13 Days’, it was the coolest rock show I’d seen in ages, it was like being at the Academy in Manchester. Then a year later a slot opened at Lock, Stock & Barrel and they took us on for two years. 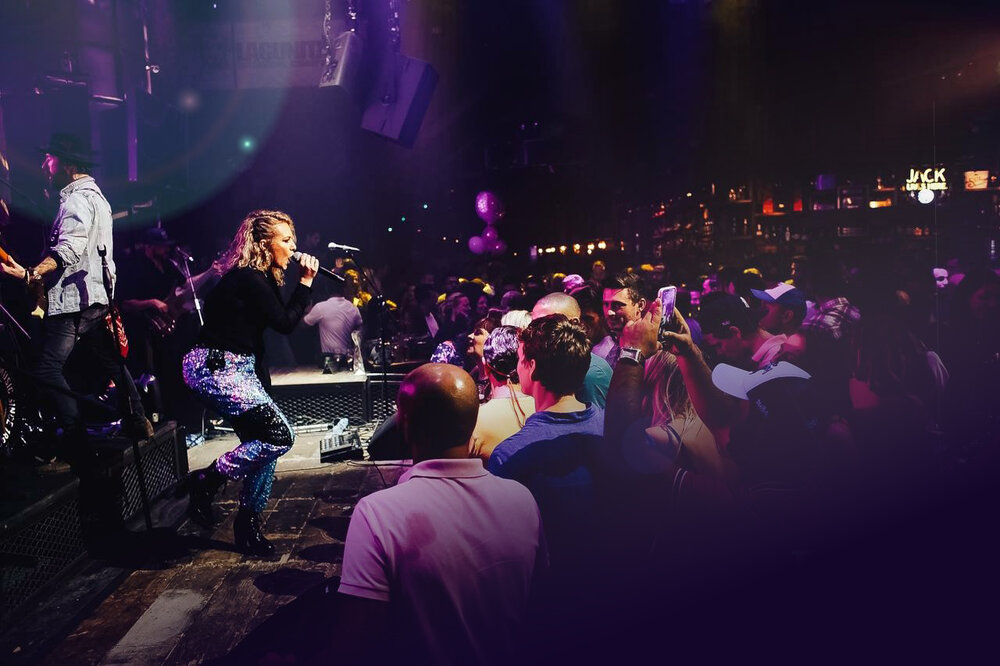 E.M.A: So, your band over here is called ‘About Last Night’ what are the future plans and goals?

John: We are now making our own original music and we want to start supporting big artists likes Thirty Seconds to Mars, Coldplay, and One Republic. Our sound is that modern day pop/indie rock stadium sound, we’ve always done some great cover versions but have now started playing out our own original music in gigs which have been getting a great response.

E.M.A: Great future plans there, and I love one of your latest tracks ‘Joker’.

John: Thank you, we’ve got two albums on the way, one which will be original music called ‘Amygdala’ which is part of the brain and is responsible for your fight and flight senses and emotions. The other will be a covers album called ‘Parallel Dimension’ the idea is if there are parallel universes out there, we would have written these cover songs in one of them and this is our version of them.

E.M.A: So, we are sat in Bla Bla right now where you are the entertainment and productions director, how did it come about you getting the job here?

John: Just before lockdown my band got the attention of this place, they’d seen what we were doing at Lock, Stock & Barrel and asked me to come in to see about the band playing here. When I sat down with them, they also said they needed an entertainment and productions director and were interested in the production values I’d brought and offered me the job.

E.M.A: Amazing, and this is an incredible venue plus extremely big, so you’ve got your work cut out!

John: Yes, this is basically the modern day one big cruise, it’s a city of bars! 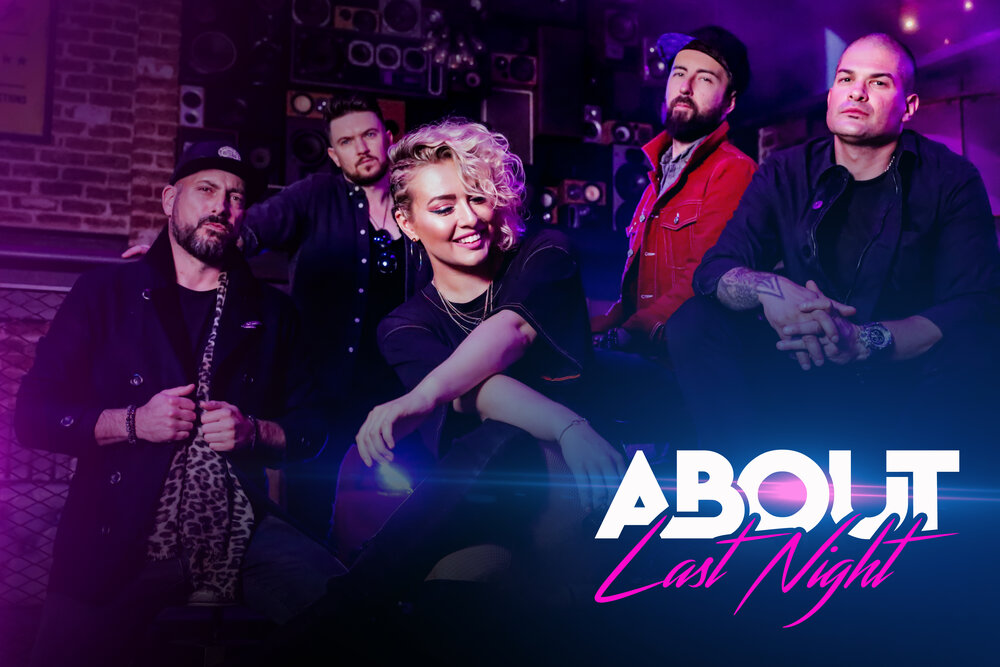 E.M.A: So, being the entertainment and productions director of Bla Bla what sort of artists / entertainment are you looking to put on for when music is allowed back in the clubs and bars?

John: I’m looking for verity and an artistic flair, not musicians that are playing the same stuff all the time, people that are creative with their sets at a high standard. I love the guys who are doing all the looping shows like Adam Baluche he’s incredible he plays eight instruments on stage and it’s just unique and cool.

If I’m bringing in singers it’s not just about a pretty girl that can sing, she needs to hold a crowd, stand above it and deliver something that people will say ‘wow did you see that singer at Bla Bla she was incredible’.

E.M.A: What are your future plans for living in Dubai?

John: So, I’ve been here four years now, firstly I want to finally get things started here at Bla Bla, we have to press play again and resume, get the band’s name out there again and finish putting the new album together. So, we are defiantly going to be staying in Dubai for quite a while.

E.M.A: What advice can you give to international musicians moving to Dubai wanting to get on the music scene here?

John: Get the vaccine or you won’t be able to entry in the country. Make sure you have good promo videos and photos. Don’t lower your prices and don’t take the gigs that are cheap.

E.M.A: What’s your favourite night out in Dubai from start to finish?

John: OK. Start off with a couple of warm up drinks in the apartment with mates and a Spotify playlist on, line the stomach at Pizza Express Live with some dough balls, it’s not like Pizza Express in the UK they have bands playing and cool neon signs plus they put on these fantastic brunches. Then head downtown to Soho Club and catch some funky live music, and then on to London Project for some G&T’s and of course end the evening here at Bla Bla.

For bookings and more information about ‘About Last Night’ head to their website.