As a small child, a Swiss family friend who was visiting gave me a tin of colouring pencils. Drawn to the bright snow atop a horn-shaped mountain – standing proud, like a bullish crater against a clear, cerulean sky, I cherished that slim tin with its candy colours.

And on that box I later learned was the Matterhorn, Switzerland’s famous summit and one of the highest peaks of the Alps, at 4,478 metres. Twenty-five years on, I found myself once more drawn to that very mountain, home to the gourmet ski destination of Zermatt.

Reached by a mountain train with Narnia-esque views, Zermatt is one of the most breath-taking resorts I have ever visited. And bordering Italy, it is ideally placed for skiers wishing to experience the novelty of skiing to a different country for the day. With predominantly red pistes, the resort is not for the faint-hearted however, as I learnt. It is favoured by the more experienced skiing set, evident by the fewer number of novices on the slopes, compared to other resorts.

Home for the trip was The Lodge – a five-bedroom, luxuriously-appointed penthouse apartment, just a short drive from the train station. Stepping out of the lift to the fourth floor, a traditional wooden door awaited, where a stylish gun-metal grey stag’s head happily greeted all guests. Each bedroom was furnished with the silkiest of bed linen, fluffy towels, divine toiletries and charming alpine touches, such as cherry-red stag cushions and deerskin rugs. 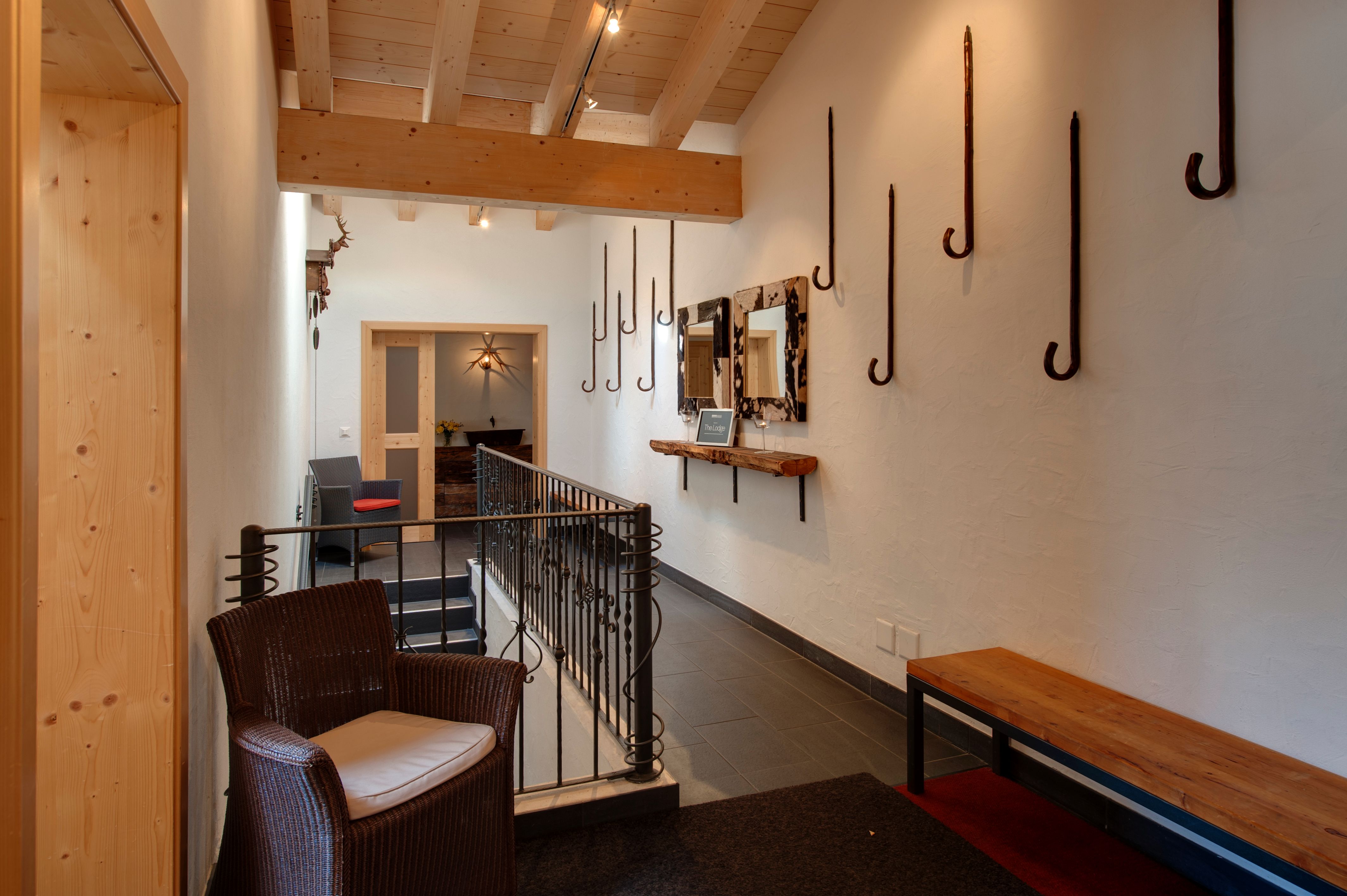 The Lodge also flaunts an artistic feel, with features such as the rosewood ‘coat hook’ walking sticks, which adorn the length of the long entrance hallway. So beautiful were the hooks though, I almost wanted to leave them unused, as a piece of modern art. The spacious living space offered two separate dining areas – one centred on a log burning fire with cowhide stools and the other offering comfortable high back leather chairs. Additionally, two sofa areas were positioned perfectly, to admire the Matterhorn over a relaxing herbal tea or aperitif. Yet The Lodge flaunted not one, but two ‘pieces de resistance’ – its own sauna and outdoor hot tub, both precisely what overworked muscles need, after a day carving powder.

A great time to visit, 2015 marks 150 years since the First Ascent of the Matterhorn, by British climber Edward Whymper, who reached the top together with his rope team. But I had come for another reason, the cuisine – as Zermatt has more fine-dining per square foot, than any other European ski resort. 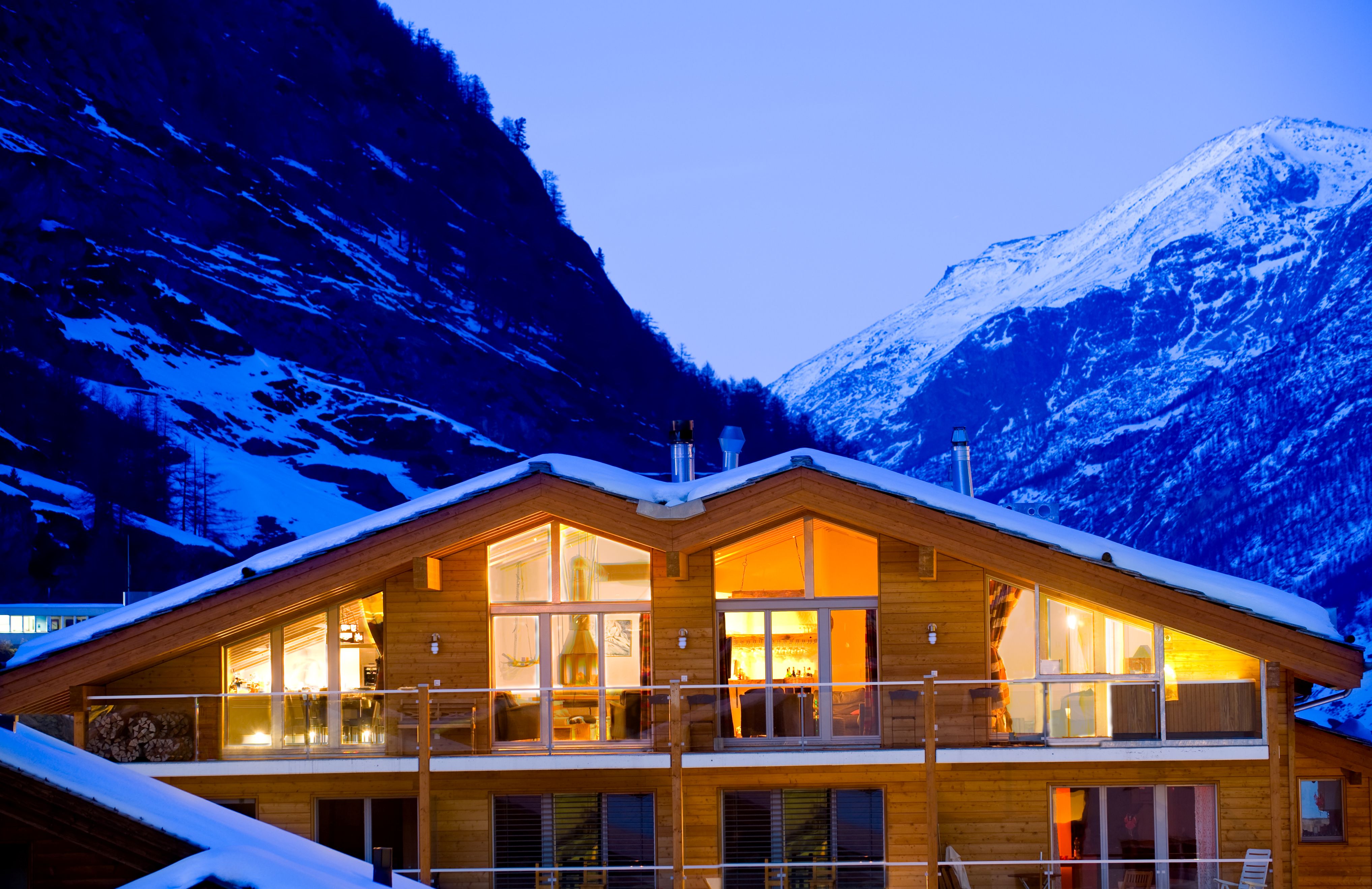 So on day one, we ascended the mountain – accessed via a train and the usual system of lifts. (Yet Zermatt being the luxury resort it is, the chair lifts have heated seats – an invention, in which every ski resort should invest). As I admired the Swiss Alps of the Valais region, our esteemed mountain guide for the day, Donald Scott, informed us of Zermatt’s rise as a gastronomic destination. Himself internationally known as the ‘gourmet guide’, Donald told us of the best mountain lunch spots and decadent dining establishments, guaranteed to satisfy the grandest gastronome.

And as well as being the resident gourmand, Donald runs luxury chalet firm Mountain Exposure, the Swiss chalet company specialising in the resorts of Zermatt and Saas Fee. With offices located in Zermatt, the firm is exclusive leasehold owners of all their chalets, which cater from 2 to 34 and range from traditional cosy, historic abodes to stunning designer spaces, such as The Lodge.

On that first day we were lucky enough to ski alongside the Mountain Exposure team – including the erudite ski guide Digby, who after 40 years of instructing, claims the best skiing in the world can only be found in Zermatt. So, under such expertise, we shouldn’t have expected anything less than to be led to one of the resort’s most highly recommended restaurants, Heidi. A favourite with Heston Blumenthal, I opted for his usual plate and Heidi’s signature dish, the quiche. This had the lightest, souffléd texture and flaky, rather than short crust pastry. As we were kept merry with Digby’s witty tales, fine wines were poured and the meal finished with a shot of pear schnapps with soaked raisins. Feeling sated, I could see I would need much stamina and balance to last the trip, after this first lunch.

Day two we headed down the Furi run of the Klein Matterhorn-Schwarzsee. Sneaking through a glade we found a cabin built over 300 years ago, home to another of the resort’s revered restaurants – Zum See. 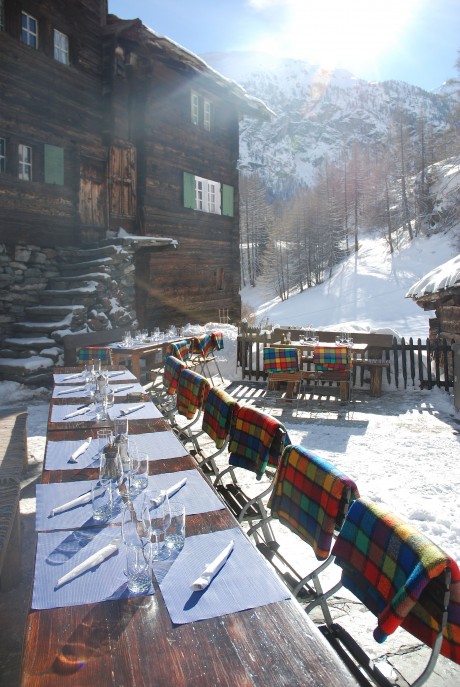 With a recent Michelin star, you need to book ahead, but it is well worth the effort. Cosy and quaint, the alpine-style interior and conservatory dining deck radiate warmth and hospitality. 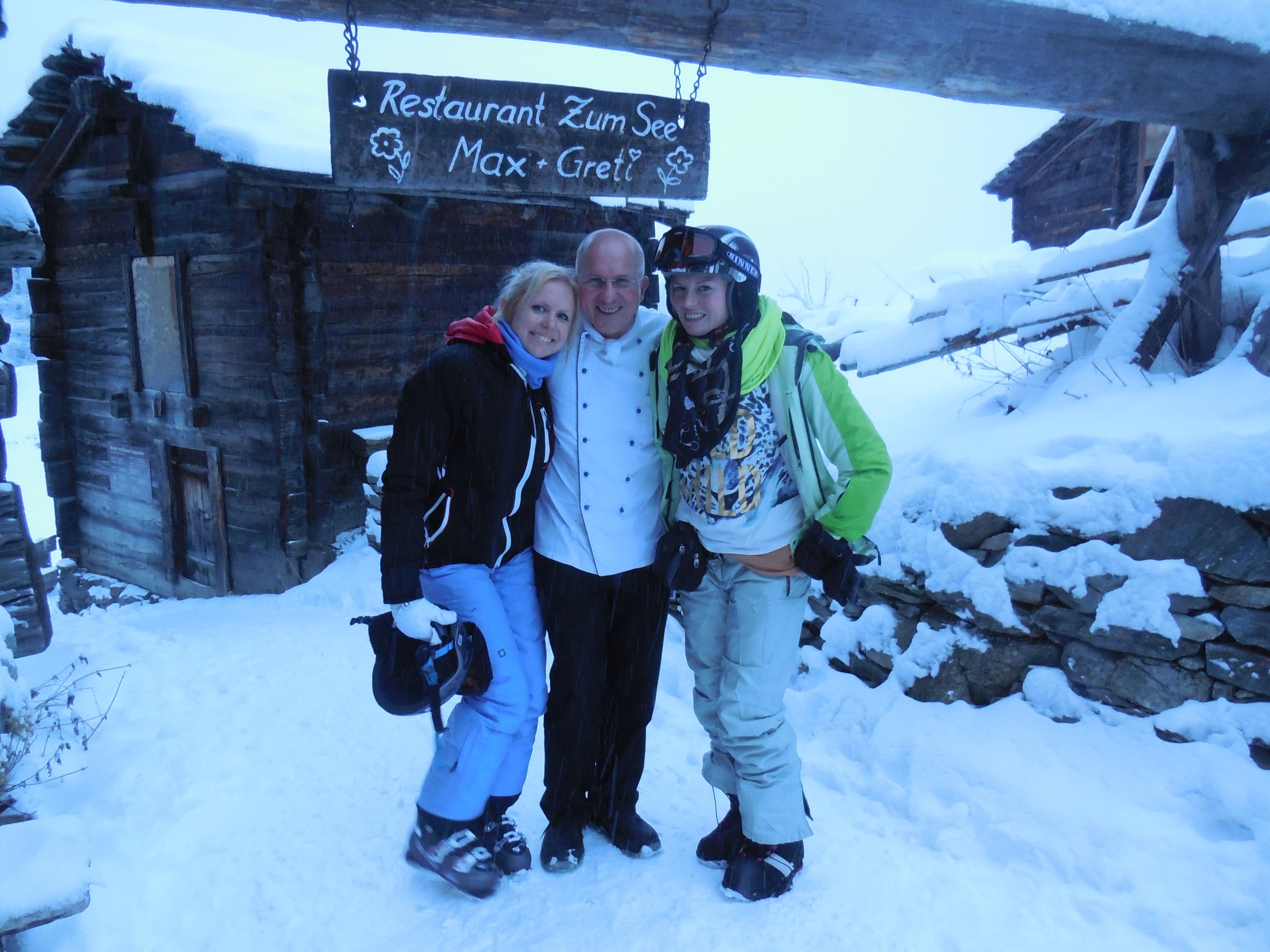 Chef proprietor Max Henning and his wife Greti greet guests like family, and were keen to check if we had enjoyed our meal, as much as his team had enjoyed preparing it. After artisan breads, starters were a lamb’s leaf salad with granulised egg and a quail salad with quail eggs. These were followed by homemade tortellini with spinach, ricotta and herb sauce and pan fried sea bass, with potato Dauphinoise. Guiltily sharing the house speciality millefeuille with my companion, we washed down the remainder of our robust Barolo, pondering how the last three hours had disappeared.

Refuelled and refreshed, we powered down the slope only to find Hennu Stall. Blasting Euro pop, this fun après ski option was also enjoyed by a crowd of Zurich-based bankers, visiting Zermatt for the weekend. After this pit stop, clicking those skis back on was an interesting experience, to say the least.

Within the town, we soon learnt there was one hotel in which the cool crowd collected – Hotel Post. Recently renovated, the trendy establishment is home to three restaurants, four bars and an underground nightclub – each one full to capacity whenever we visited. The showstopper in Post is without a doubt Portofino, its signature restaurant serving Mediterranean nouvelle cuisine, in a room full of fashion-inspired art. Hosted by the delightful chef de service Dylan Osterino, previously at London’s Sketch, we began a gourmet adventure here into a five-course tasting menu, paired with wines.

The Portofino menu encapsulates different delicacies, taking a tour of the senses through regional plates of well thought out cuisine. Dylan our host, whose international knowledge and nose paired wines, enlivened every morsel. The journey started with the sea – tuna with an apple granita, papaya salad, edible flowers and a lime sorbet, to open up the palate. With a Sauvignon Blanc from the Sierre, mouthfuls disappeared within seconds.

Next came a rich leek and truffle soup with pumpkin and shaved truffle, paired with a Barbera with notes of blackberries and autumn leaves. This was succeeded by turbot with topinambour and leek, paired with a Cannonau from Sardinia, then a duck leg confit with slice of venison appeared, paired with a five-day breathed Dugal. The sublime end arrived in the form of a gingerbread crème brûlée with shortbread and spun sugar, made by our very host, paired with a savouring apricot digestif.

Within the hotel, we also sampled a truffle cheese fondue with porcini mushroom at Pöstli Stübli, the hotel’s traditional eatery, which has a Swiss mountain theme with obligatory alpine bells. And Post’s Spaghetti & Pizza Factory served us fresh salads and homemade ravioli one day, as we zoomed in straight off the mountain.

The Snowboat was another institution we were told not to miss, whilst staying in Zermatt. The upstairs cocktail bar with its funky Heinz Julen décor, mixed their signature espresso martini, which warmed us right down to our frozen toes. Dinner in the Zermatt Yacht Club downstairs followed, where I sampled the most excellent chicken fajitas, all with a mesmerising fish tank and unique chandelier in view. We were lucky enough to meet founder and owner Gee and his charming wife, themselves having dinner. They talked amiably with us – genuinely keen to hear which slopes and bars we had conquered already on our trip.

As the saying goes, skiing is a dance and the mountain always leads. So the next day, as snow was too heavy, on recommendation we tried Gee’s namesake venue, for a gourmet brunch. This all-day spot, which also offers an après-ski live band most nights, delivers the spiciest bloody Marys and most sensational eggs benedict in town. And underneath, lies the Cuckoo Club – a glamourous gin palace, complete with darkened, raised tables and plush banquets, centred around an all-important dancefloor. Later that day, after enjoying flaming passion fruit martinis, we took to the floor and watched with glee, as a mixed party of twenty entered, resplendent in dirndls and lederhosen. 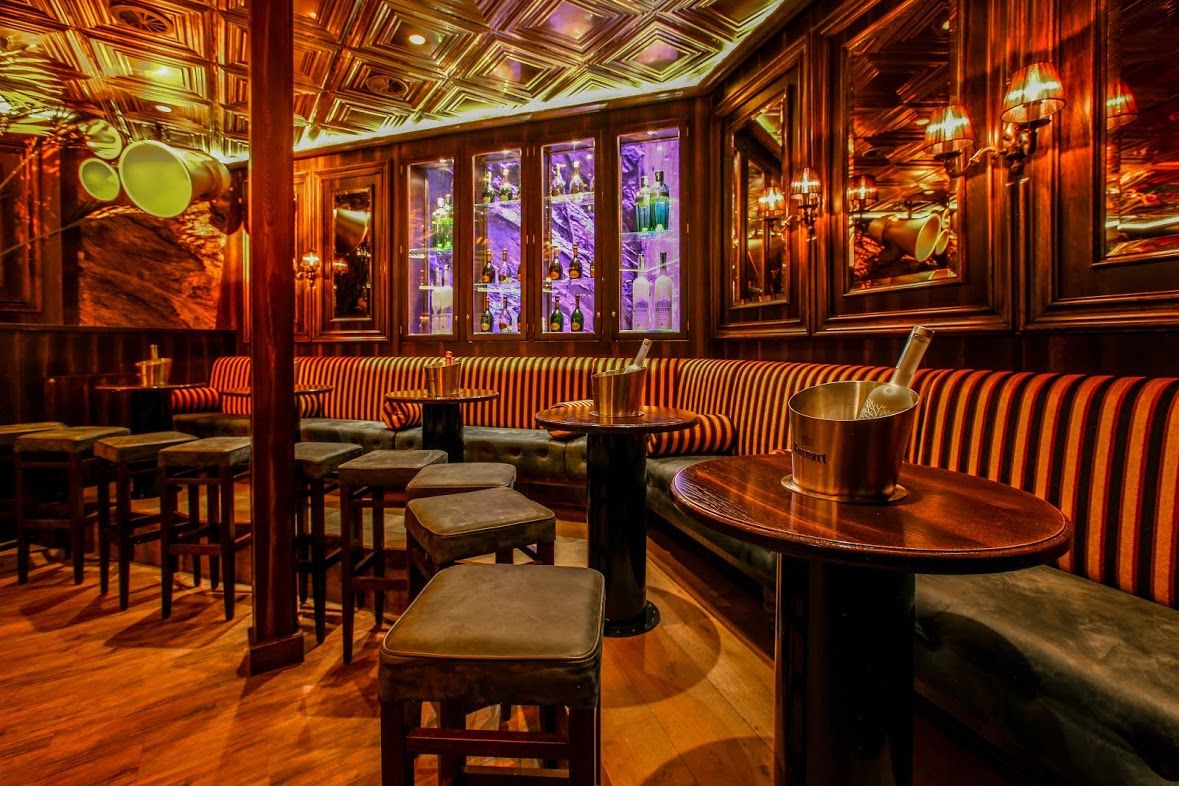 Yet despite the obvious appeal of Zermatt’s many brasseries and bistros, perhaps the ultimate luxury is to have a delicious dinner brought right to your doorstep. And as it happens, The Lodge can be fully catered, so we decided to let the chef Paul and team deliver us a feast one evening. We weren’t disappointed with the delicate canapés – served as champagne poured continuously, followed by a tangy crab salad, sea bass en Papillote and an Eton mess-style meringue of a pud. Hosted by our gourmet guide Donald, our party laughed and chatted, as we enjoyed his expertly-chosen wines.

And as our short time in Zermatt neared an end, we mused on what we had yet to see and do in the town – such as a Tandem Paragliding Flight, a visit to the Matterhorn museum, which charts the history of the mount’s tragic ascents, plus visits to Elsie’s and the Tea Bar – both recommendations from previous lift discussions. Yet, as our splendid host Donald finished the last of his red, he intuitively declared his own mantra; ‘life is but a series of adjustments’, inspiring me to start planning my next pilgrimage to the Matterhorn.

Luxury chalet specialists Mountain Exposure offers The Lodge, which is catered and sleeps 10, from £2,300 per night in 2015 or Penthouse Helia, which sleeps 2 starts at £200 per night, self-catered. Heathrow Express runs between London Paddington and Heathrow Airport every 15 minutes with a journey time of 15 minutes. For the best ticket offers visit their site. Find the cheapest and most convenient flights to Zurich from London searching on travel site momondo.co.uk. Zermatt is easily accessed, via two punctual, clean and spacious trains from Zurich airport that can be booked at SBB. Find more information at Switzerland Tourism and Zermatt Tourismus.