Thousands of people undergo fat reducing treatments each year, but some relatively new procedures claim to remove fat without surgery.

Coolscuplting is the ‘new kid on the block’, a leading non-invasive fat reduction treatment created by two Harvard Doctors.

It’s an innovative way to contour the body and involves freezing unwanted fat from areas such as the thighs, love handles and the belly.

The technology used during treatment consists of applicators that are placed on parts of the body that has excess fat.  The applicators cool the area until the fat cells freeze, a process known as cryolipolysis.

The process feels like ice because the device used to treat people is directly freezing the fat cells below the skin without causing harm to the surrounding tissue. Once the fat cells are frozen, these drain naturally from the body. 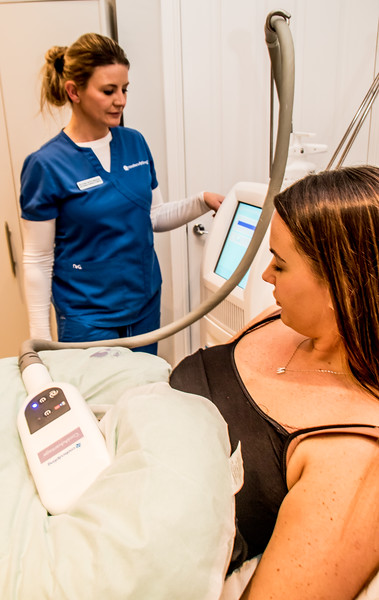 It can take six to twelve weeks to see the results, but a patient can lose half an inch from their waistline after just one 1-hour treatment. That’s another notch less on your belt! And an area can be treated multiple times, but doctors say that the first treatment is the most effective.

With more than five million treatment cycles performed worldwide every year, you can understand why people everywhere are excited at seeing an entirely different view of themselves. In some cases, the non-surgical alternative reduced fat in areas of the body by as much as 27%.

“People are drawn to the procedure because of the non-invasive results and there’s minimal downtime”, says to Dr Jonquille Chantrey, who is a global  leading expert in the field of fat loss and provides the treatments to men and women at her luxury facility ONE aesthetic studio in Alderley Edge.

And in terms of the risks, there’s very few. “There will of course be some temporary redness and tingling sensations, like you would get if you were to have a regular facial or similar but it’s normal.”

You will, however, need to have realistic expectations of what the results will look like and the cost for procedure before receiving treatment. That’s where a consultation is beneficial, to ensure that the treatment will impact the areas that need attention.

“The best candidates are those who already take care of their bodies, but anyone can have the treatment as it’s non-surgical”, explains Dr Chantrey.

And does it work? “While fat cells deplete, other fat cells can expand so if you are considering this treatment then you have to maintain a healthy diet and continue to exercise, she continued.

Ah, shucks – and there was us thinking that we didn’t have to go to the gym anymore!

What does it cost?

The cost is dependent on the areas to be treated and the number of sessions required.

Entry level prices start at around £600. However, for a limited time, VIVA readers can take advantage of special offer for DualSculpting. A limited deal of £900 with ONE’s experienced CoolSculpting practitioner Julie Burnett instead of the normal price of £1200 means that you could get two areas treated at the same time in one session, giving you even more sculpted results while cutting treatment time by half.