WATCH: Gordon Ramsay lose a head to head battle with a sea snail

This is the moment TV chef Gordon Ramsay goes head to head with a sea snail – and loses.

But in keeping with Maori culture, he’s forced to forage or capture all the food for his feast.

To harvest paua – a highly prized sea snail or abalone – he has to go free diving with just a snorkel.

Preparing to search the shark-infested waters around Stewart Island wearing just a snorkel and some flippers, Gordon says: “Paua are a unique species of abalone only found here in New Zealand.

“They’re one of the ocean’s greatest delicacies, regarded by the Maori as a gift from the Gods.

Gordon’s first hurdle comes as he struggles to find the well-hidden shellfish as they lurk in what looks like an underwater meadow of kelp.

Gordon explains: “Paua cling to the rocks on the seabed but there is so much kelp down there I can’t find them and after just a few seconds, I’m gasping for air.”

As well as entering Maori folklore for their delicious taste and unique texture, paua are also known for their strength.

Marathon runner Gordon might be in great shape, but he appears to be no match for the tiny sea snail as they cling to the rocks to prevent themselves from becoming Gordon’s dinner.

And with no oxygen tank to help him, Gordon starts to really struggle.

Gasping for air after a failed attempt, he tells cameras: “That’s a lot harder than it looks, controlling the breathing. 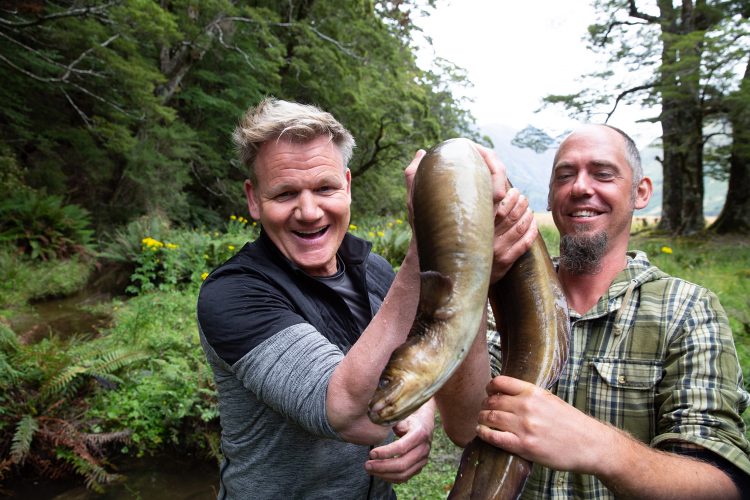 “Paua are a protected species and can only be harvested by free divers. Amateurs like me have a daily limit of 10, at this rate I’ll be lucky to get one.”

Struggling to detach a single paua, Gordon starts to make excuses, saying: “In Maori legend paua were compared to mighty warriors able to overcome their opponents with stubborn strength, but surely I’m not going to be out-muscled by a six-inch shell fish.”

Gordon struggles so much to prise his paua off the seabed, it’s not long before he’s being mocked by local fisherman Zane, who quips: “Don’t give up your day job, you’d be very, very poor.”

However, he needs the paua for his feast and Gordon is determined not to be beaten ahead of his banquet and eventually wins his bounty.

Shellfish aren’t the only thing on his foraging list. Episode one of National Geographic’s Gordon Ramsay: Uncharted sees him climb a tree to harvest fuchsia berries, journey through a forest to find spicy popotito leaves, hunt a mountain goat, catch eels with his bare hands and collect elusive huhu grubs.