A local whiskey connoisseur turned blogger has recently had much success from his special release whiskies and plans further expansions for the new year.

https://t.co/3fizazlWAw: One man’s mission to share and inspire with everything about whisky, whiskey, gin and beer. pic.twitter.com/FG6nGlwKkx

The first of these two whiskies is the Invergordon Single Grain Scotch Whisky Single Cask, distilled at the Invergordon distillery in the Northern Highlands of Scotland and aged for 11 years, with just 160 bottles being released at the time. 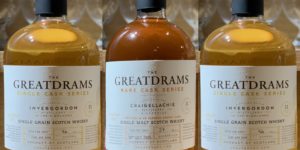 Mr Dillon stated: “They are both totally unique and genuinely are packed full of flavour.

“The Invergordon I describe as being like drinking boozy butter and the Craigellachie is like Christmas in a bottle, so indulgent, so scrumptious.”

Mr Dillion has more whisky releases coming out in February 2019, however he “can’t say more yet”.

In celebration of the publication of Mr Dillon’s book, The GreatDrams of Scotland, last year he decided to release his first special edition whisky with the Ardmore Single Malt Single Cask Scotch which did so well that it lead to the Invergordon and Craigellachie.

The three stages of maturation for our #limitededition #Craigellachie release – amazing how the influence of wood takes hold on the #whisky both in flavour and definitely in colour. You can still pick up a bottle of this awesome release at GreatDrams… https://t.co/3ZEmvhRww0 pic.twitter.com/OQZvPFhl1b

Mr Dillon said: “I had wanted to do it [write a book] for ages, and once the concept and the outline had been put together, I just went for it, mostly writing on planes and trains while travelling to meetings.

“It was supposed to be a one off but did so well that we decided to get all the licenses in place, buy a load of amazing casks of whisky, and build a new business as independent bottlers.”

Mr Dillon began GreatDrams in 2014, the idea being to democratise whisky and encourage drinkers to discover more different flavours, with the first review published on

GreatDrams being of the Talisker Storm Single Malt Scotch Whisky.

He stated: “My dad was a whisky fan so, after he passed away when I was 19, I decided to explore whisky and spirits as I was travelling the world for holiday and work.

“I had wanted to do something for a while, and I was consulting with whisky brands a lot at the time of starting the website, so I thought: ‘Why not give it a go, put my views out there, and see what happens’.

“The support from the industry for an unknown [Mr Dillon himself] was unbelievable. Everyone was so kind, open, and generous. Now, I couldn’t imagine doing anything else.

“Spending a week in Japan for meetings with distillers last year [2018], getting to see the country, and some of the iconic Japanese distilleries was my favourite experience whilst working on GreatDrams.”

Well, following a manic – and frankly awesome – December, we only have a couple of cases of our award winning #limitededition 11 Year Old Invergordon left in stock. It also happened to have picked up a Silver Medal in the 2018 Independent Bottlers Challe… https://t.co/SzIkYLUnqi pic.twitter.com/2H75V3OzIu

GreatDrams was awarded Silver in the Independent Bottlers Challenge in December 2018, UK Food & Drink Blog of the Year 2017, and was named Best Online Spirits Resource in November 2018.