Young Blues sensation Laurence Jones wowed crowds at Manchester’s Band On The Wall last week with a stunning performance of songs from his latest album ‘What’s It Gonna Be’ along with earlier tracks and some classic Blues Rock covers with a twist.

Laurence is already a hot name on the Blues scene having this month won Young Blues Artist Of The Year at the British Blues Awards for the second year in a row. Joined on stage by his band, Roger Inniss on bass and Miri Miettinen on drums, who have both been awarded best in their category by the Blues Matters Writer’s Poll, Laurence Jones and co. prove their worth as highly talented and passionate musicians.

Laurence and his band take to the stage with excitement in their eyes and it’s clear to see that performing live is a joy for them all. Bursting into title track ‘What’s It Gonna Be’, the band instantly engaged their crowd with their technical ability and high energy. Storming through a set of powerful Blues melodies, the band ensured a captivating set, playing in a range of styles, even bringing the volume right down to acoustic at one point and demonstrating the versatility of the genre. Their playfulness on stage and moments of musical spontaneity are a delight to watch.

Laurence shows his obvious flair for songwriting through his own numbers, which he delivers with sincere emotion. His covers, including Blues favourite ‘All Along The Watchtower’ and Lead Belly’s ‘Good Morning Blues’, demonstrate his creativity and impressive ability to restyle songs and put his own stamp on them.

The 23 year old already has a dedicated following. With 3 albums already under his belt, huge enthusiasm for the road and most importantly a clear devotion to his music, Laurence is sure to be picking up more fans along his way.

VIVA caught up with Laurence before the show to learn a little bit more about his journey so far.

How has your tour this month been going? Are you looking forward to playing Manchester tonight?

It’s been really great. We’ve been enjoying playing new songs from our most recent album ‘What’s It Gonna Be’, and playing in different parts of the UK that we’ve never toured before. We’ve had really a good response! I actually played Band On The Wall a couple of years ago supporting a band called The Royal Southern Brotherhood and I really liked the venue, so yeah I’m looking forward to it.

You’ve just been voted Young Artist of the Year at the British Blues Awards for the second year in a row now. How does that feel?

It feels amazing, especially to even be nominated again for the Awards! I’m very grateful to my fans for voting for me, they give me a lot of support.

How did you first get into Blues music?

Which artists have really inspired and influenced you?

I’d say Walter Trout. Earlier this year I played on stage with him at the Royal Albert Hall and it was amazing. I think that’s probably my favourite gig to date – it was just an amazing experience to share the stage with people like Van Morrison, Eric Burden, Paul Jones and Walter. Walter’s actually been a great mentor to me. I’ve been lucky enough to grow up listening to all my heroes –  Johnny Winter, Kenny Wayne Sheppard and Walter Trout – and now I’ve been on tour with all of them, so it’s been great to meet my heroes and to have them mentor me along the way.

Is there someone that you haven’t had the chance to meet yet that you’d love to work with in the future?

Are there any artists new on the Blues scene that you think we should keep an eye out for?

Well we’ve done a few shows with Gary Clarke Junior and I think he’s great! It’s really good that young guys are out there bringing Blues to a younger audience. There’s a lot more young people coming to the shows and getting into Blues music as well.

Which tracks or artists do you particularly enjoy covering?

We’ve recently just covered a Lead Belly track, which is on our album, called ‘Good Morning Blues’. Lead Belly was really one of the first Blues artists, along with Robert Johnson, so the original is a very old recording. We recorded this track electric and tried to imagine what Lead Belly would be doing if he was playing an electric, so that was really good fun.

Where do you get inspiration for your original material from?

Well ‘What’s It Gonna Be’ was inspired by a lot of experiences I had on the road. I recently signed a record deal with Ruf Records who are the second biggest Blues label in the world. In 2014 they put me on tour all the way around Europe on a package called The Blues Caravan and that’s where I actually met my band, Roger Inniss and Miri Miettinen – at the end of that tour I asked them to join me. It was a great experience to get out into Europe for the first time and I saw a lot of crazy things out there so that’s what inspired me to write the songs on the album!

Whats next for you? You’ve just released your third album but are you already working on new material or are there other projects in the pipeline?

I’m always working on new material, it’s natural, it’s just what I do. We are hoping to bring out a Live DVD soon though.

And lastly, have you got some advice that you would give to young musicians interested in becoming part of the Blues scene?

I think it’s good to check out other young people on the Blues scene. There’s loads of younger guys doing it which is great because the more the better! We need to keep blues music alive. I’d just say if it’s in your heart then definitely follow it. Go for it. I was offered a Pop record deal when I was 18 and a Blues record deal, and I followed the Blues. It’s what I love! 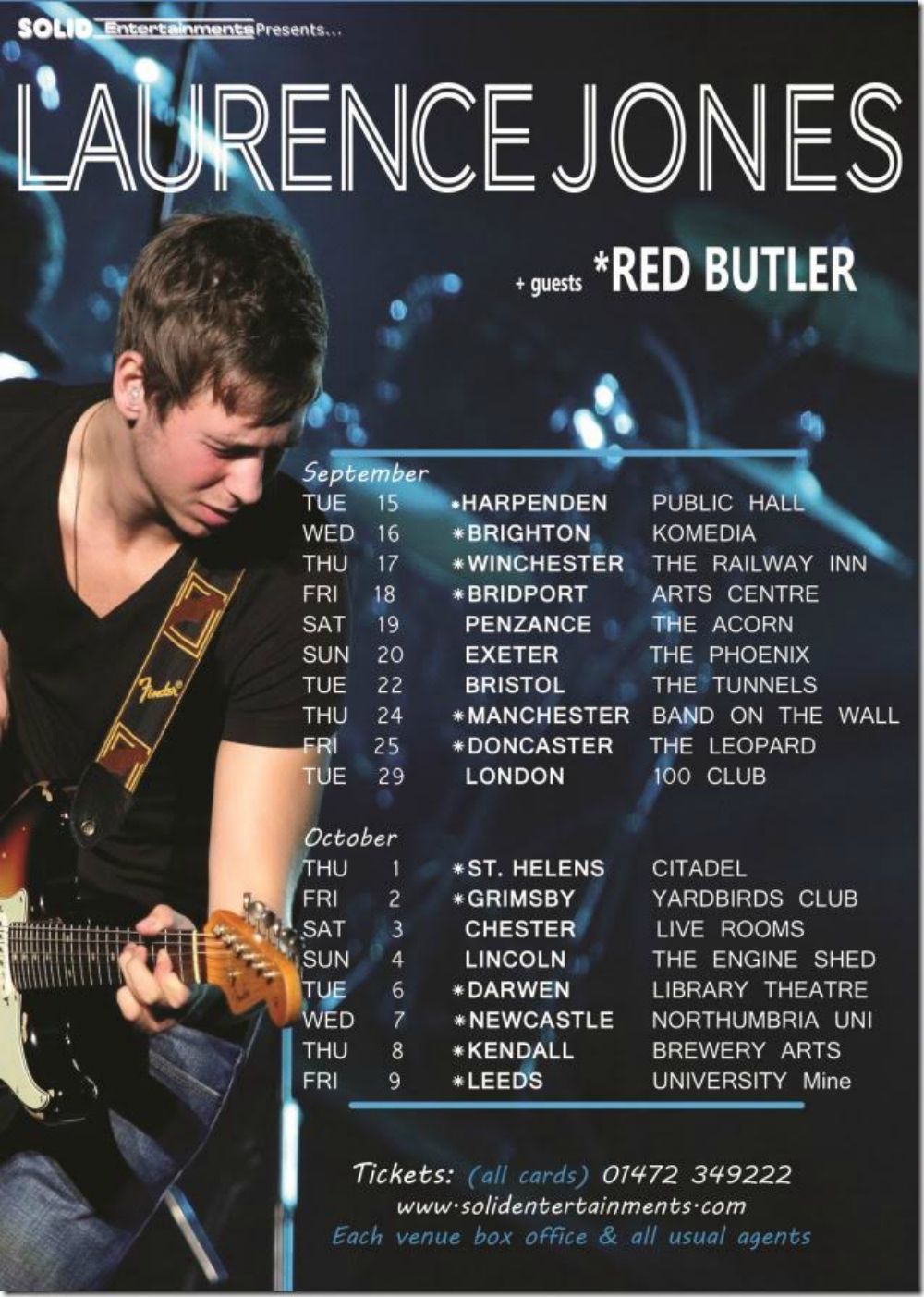 Catch Laurence Jones on tour this Autumn at St Helens’ The Citadel on 1st October and Chester’s Live Rooms on 3rd October.

For more information and to buy tickets visit www.laurencejonesmusic.com