Nigel Slater’s Toast arrives at the Lowry in Manchester on November 11th. Based on the autobiographical book of the same name, the show returns to the Lowry after it premiered there last year.

Set in the 1960s, Toast follows Slater’s childhood through tastes, smells and, of course, cooking. The show is heartbreaking, moving and emotional but unbelievably beautiful.

VIVA caught up with Henry Filloux-Bennett, the play’s writer, to talk about how he found adapting such a story and the challenges he faced whilst doing so.

How much of a challenge is it adapting something from a book?

One of the biggest challenges of adapting any book on the stage is how you make it interesting to watch. Obviously, if you are reading a book you can be totally absorbed in it and you can enjoy the plot. But actually, when you are faced with watching something that takes it in a different direction.

The added joy with Toast is that it is not a narrative-based book. It skips around quite a lot, it does his childhood roughly but it talks about it in tastes and smells and memories. So finding a journey to go on from start to finish…that was mainly the massive challenge of adapting a book like Toast but that made it more fun.

Were you scared about Nigel’s reaction to what you had produced?

I was terrified of Nigel’s response to it! You always think that what you are doing you quite like. Then you have to present it to the person who it is about and who wrote the thing itself and that’s terrifying. He was very nice about it and he said he wouldn’t read it until I was happy with it which was a massive bonus. He was generous in saying do whatever you need to do. 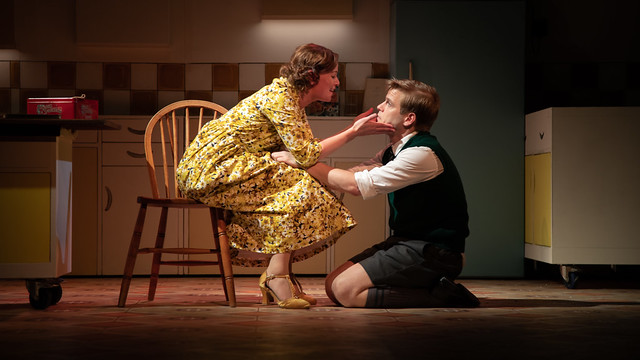 Why do you think the tastes and smells are so important in both the book and the theatre play?

In the book, it’s all in chapters and all the chapters are things like Apple Pie or Marshmallows. Everyone knows the smell or remembers the smell of certain things. Like toast, if you think about it everyone can smell what toast smells like as it starts to burn a little. All of those things are all of his chapters in the book so we had to respond to that in the play.

That’s why they are important because without them the book doesn’t really exist. Without them, although it’s a lovely book, it would just be a book about a boy growing up.

What problem did that cause when you brought it into theatre?

So many! So it started at the Lowry and one of the biggest problems we had was “How on earth do you feed 400 people a night with more than one thing?”.  Almost impossible. Nigel and James, Our Food Director, worked with the people at the Lowry, Pier Eight, to create these things that everyone would get to taste.

Nigel came up for tastings. He was so involved in everything to do with it. I remember when he came up for tastings he was like “this needs this” and  “A bit more sharpness in lemon meringue tarts”. So he was really involved and I think that’s how we got through it, with just massive collaboration and with the Lowry saying do what needs to happen. That was just the biggest support that could have existed; for the Lowry to do it in the first place and then to say oh yeah just do whatever food you need to do was amazing!

(They do cooking on stage too!) 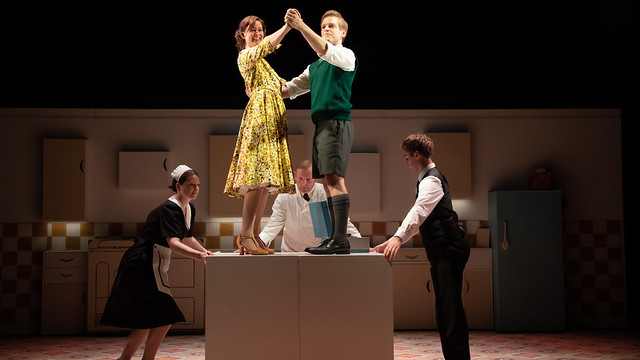 How did you pick out which bits to include and exclude?

Post-Its. I had a lot of Post-Its. This is so glamorous, I went to a Travelodge and I got my post-its out. I had themes because you couldn’t do it by chapter like “Angel Delights” or “Walnuts Whips” as it doesn’t really work like that. So I got all of the themes and I got every single page number that related to one of those themes and started to put them into different places.

We knew it had to start when he was young and end when he wasn’t which was easy. Some major events in his life had to happen, so for the dramatic purpose, you couldn’t start with that and then have two hours of it all being fine.

So the writing of it wasn’t boring but I didn’t read it and think oh I have to do this! It was all very matter of fact, it was like a jigsaw puzzle.

What’s the difference between the film and the stage adaptation?

I haven’t watched all of the film. The thing I know is different are the endings. The ending that happens in the book is not the same as the film and is not as same as the play. I’m really delighted that Nigel said the play is the nicest ending, even out of the book, which I’m really touched by.

The reason I knew what to do with it is that he’s said in an interview about the film that the book was him saying goodbye, or sorry, to his mum. So there’s a thing that happens in the play and you sort of can’t believe what happened happened. He still regrets that and so the book was his way of saying sorry for doing that. We ended the play knowing that was what he wanted to do so I got to do it in a way that the book hadn’t done it and the film didn’t know to do it. 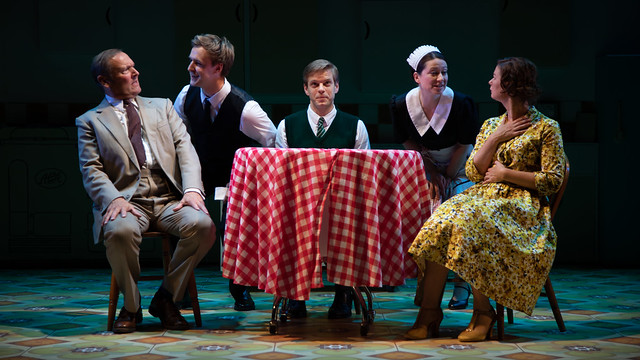 Toast will be at The Lowry November 11th – November 16th.