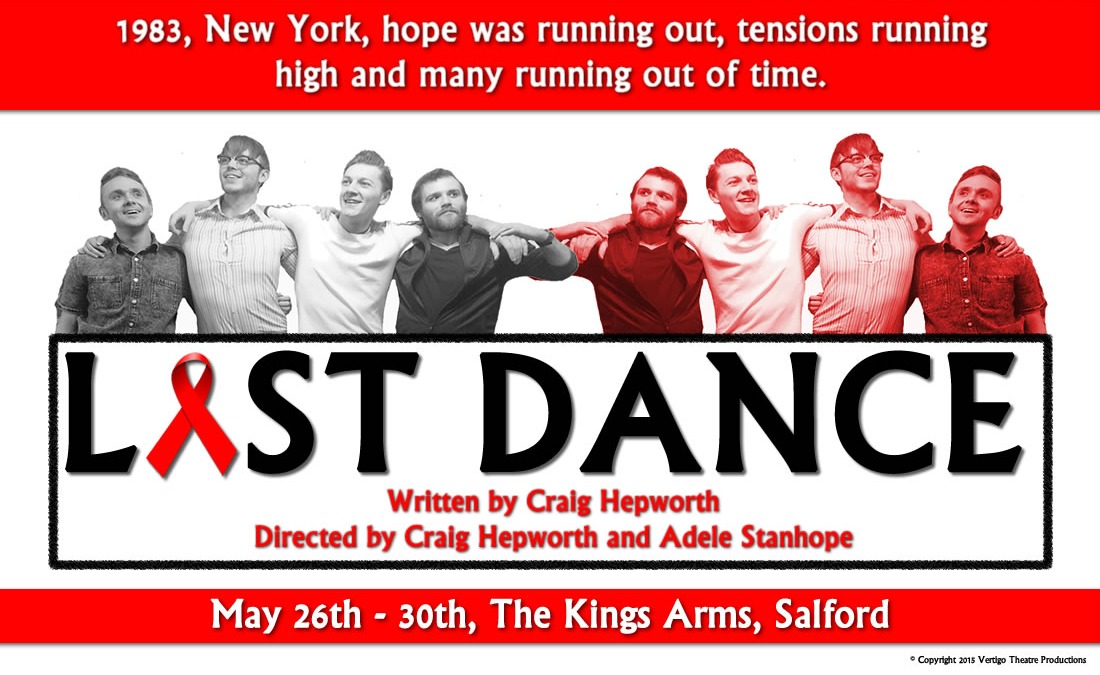 A journey of hope, fear and inner strength, Last Dance is a poignant story about the raw emotions when facing death, fighting discrimination and finding a light in the dark.

Vertigo Theatre Productions have always been known for their daring interpretations of real life issues and their latest show Last Dance was no exception to this. This time they tackle the subject of AIDS and they do so in a poetic, dramatic and powerful way.

Created and directed by the award-winning team Craig Hepworth and Adele Stanhope. Last Dance stripped down to the bare bones of what great theatre should be. The actors were superb and really captured the essence of intimacy that was needed to keep the audience on the edge of their seats and close to tears. The juxtaposition of light and shade worked well in this production, there were a few moments of humour that softened the intensity of the emotional scenes.

Last Dance is set in 1980’s New York, when the AIDS outbreak began and the world didn’t know how the virus was spreading and more importantly, how to stop it. The story follows twenty six year old Corey Renman, who is a professional dancer in A Chorus Line on Broadway. He has a loving family, a boyfriend, a successful start to his dance career and plenty of friends surrounding him when he discovers that he has the mystery illness, that has started to rip its way through the gay community. His family members and friends are forced to deal with the tragedy of watching Corey struggle to hold on and enjoy the time he has left to live.

Set mostly in Corey’s apartment, the simplistic setting and limited props only enhances the focus on how the actors connect with each other on stage. The strong cast individually and together played their roles with conviction, each character well-rounded and equally flawed, making them likeable and some not so likeable.

Richard Allen, who played the lead role of Corey needs a special mention for his incredible and heart-wrenching performance, his sincere approach to the character excelled expectations and you could physically see the demise of his character throughout the play. The final few scenes had many audience members gasping in awe and by the final dramatic last dance, there was not a dry eye in the room.

Last Dance is definitely not light entertainment and will hit you hard in the heart with its thought-provoking sensibility. The play shines a light on the strength of the human spirit, the transition between life and death and how faith, love and hope can uplift you and remind you that before you can move forward, you must look backwards.

Overall, the production was a resounding success, an example of raw, unforgettable theatre that leaves a lasting effect, even after the final scene.