Live At Leeds Gave Us The Best Bank Holiday Weekend Away 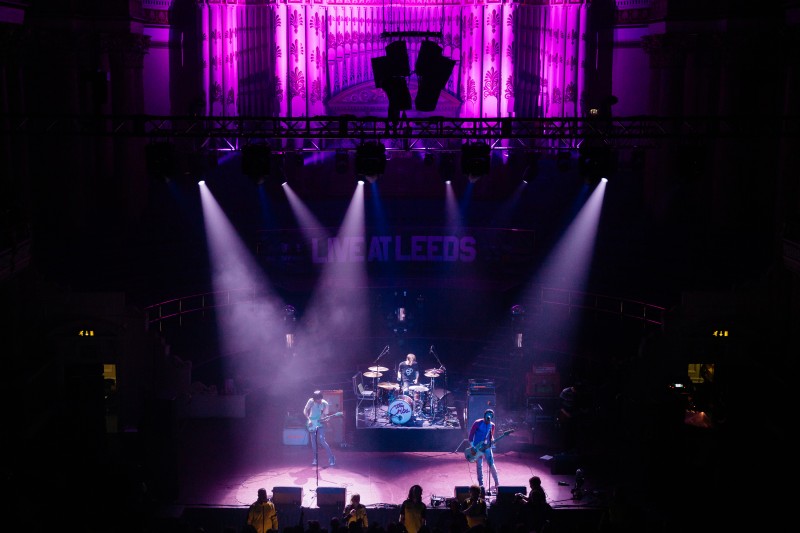 This bank holiday weekend we took the train to Leeds to check out Live at Leeds – one of the country’s biggest and best metropolitan festivals. With two hundred acts over twenty venues, this festival is the perfect way to explore a city we didn’t really know much about! Leeds proved its live music scene to be rightfully one of the best in the North West.

Although no acts were actually showing there, we made our way through a drizzly city to the Leeds First Direct Arena to pick up our wristbands, walking through crowds of edgy twenty somethings and excited Leeds residents to collect our ticket to all the venues. For this festival, your wristband would get you into any of the twenty venues listed and you were welcome to see any of the bands you could get to in time. No exclusivity but no single tickets either – but seeing as the selling price was less than £30, even if you were only in it to see Lawson or The Cribs, then you were getting your money’s worth!

As we were in Leeds all day, we got to see many bands that we hadn’t even heard of. Making guesses by bands we’d vaguely heard of as well as venues we wanted to see and which acts had the coolest band name, we managed to catch some amazing acts that we would never have heard of otherwise. 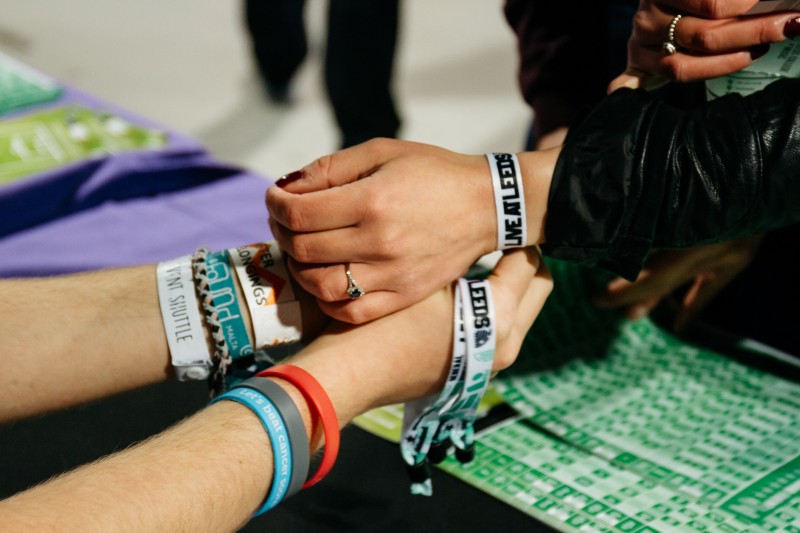 Thankfully to Uber (now launched in Leeds as well as Manchester!) we never had to stay in the rain for long and considering the trek that our first venue – Brudenell Social Club – was out of the city centre, we couldn’t be happier to not have to ruin our hair for our opening acts.

First up, we caught the tail end of Actor, who’s happy front woman made a change to the usual miserable chicks of indie. Her raw vocals matched with the talent of the band and considering it was their first live show, the performance quality was outstanding. Definitely one to look out for!

Following that came OhBoy, another indie band who travelled from the Midlands just to travel back to play another show that night. It was a standard show but the mix up of two vocalists – guy and gal – made a pleasant change. The songs were catchy enough to bounce about to (inbetween some pretty terrible jokes).

One of the best bits of exploring a new city is not just exploring the music scene, but Live at Leeds gave us the chance to find some amazing food. We took a happy pit stop for lunch at Bundobust – a vegetarian indian street food kitchen. The staff were friendly, the atmosphere was lively and we sat in a heated outside area with our delicious array of snack food. Definitely one to look out for next time you take a day trip to Leeds!

Although upon arriving at Belgrave Music Hall shortly after, we felt kind of annoyed at our full tummies when we discovered the venue sold some amazing looking pizza. Happy enough to just drink and wait for the next band we wanted to see, we headed up to one of the best roof terraces that the city has to offer. Cute sheds, plenty of coverage and what would probably be a stunning view if it wasn’t for all the rain, between the pizza and the numerous cool rooms, Belgrave had already sold itself to us.

Here we also saw probably one of my favourite acts of the day Oscar and the Wolf: a beautiful all male four piece with bass that beat through you and some of the dreamiest vocals we’ve ever heard from a band we didn’t know! Right at the front, we got to stare up at this gorgeous, alternative pop act and sway as if we’d known these songs our whole lives. The Belgian band was definitely a hit for the crowd and highlight for VIVA. 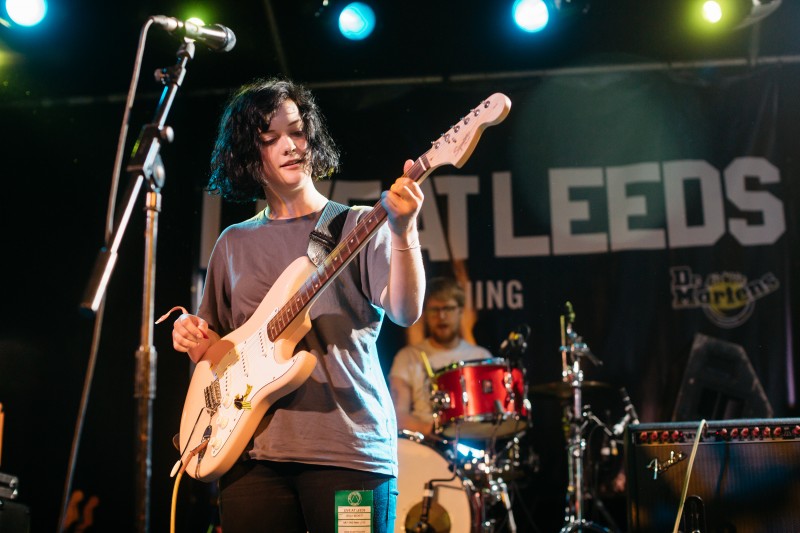 We then ran across the city to the Leeds Beckett University Union to catch three more acts, our longest stint in one venue for the entire day – Bruising gave us chill vibes as fans kicked their legs through the upper level barrier and proved again that female vocalists weren’t lacking at Live at Leeds. Whilst getting drinks and waiting, we stumbled across The Big Moon on the smaller Stage 2 in the Union: the all girl four piece spent ages setting up but the wait was worth it, cool girls with cool lyrics that you could immediately sing along to. Although we’d gone to the Union specifically to catch Menace Beach, the band gave a good show but nothing spectacular compared to the unknown acts that had wowed us all day. But we especially loved the gold glitter guitar Liza Violet brought to the stage!

Although we were considering giving ourselves a break before catching Hookworms’ set at the Union, that didn’t seem in the Live at Leeds spirit, so we ran across town to catch Bad//Dreems at A Nation of Shopkeepers. We accidentally ran in through a back door and managed to get right next to the stage – the Australian band smashed it, getting the windows steamy and crowd riled. You know you’re rocking it when you have four middle aged men trying to start a mosh pit at 6pm! 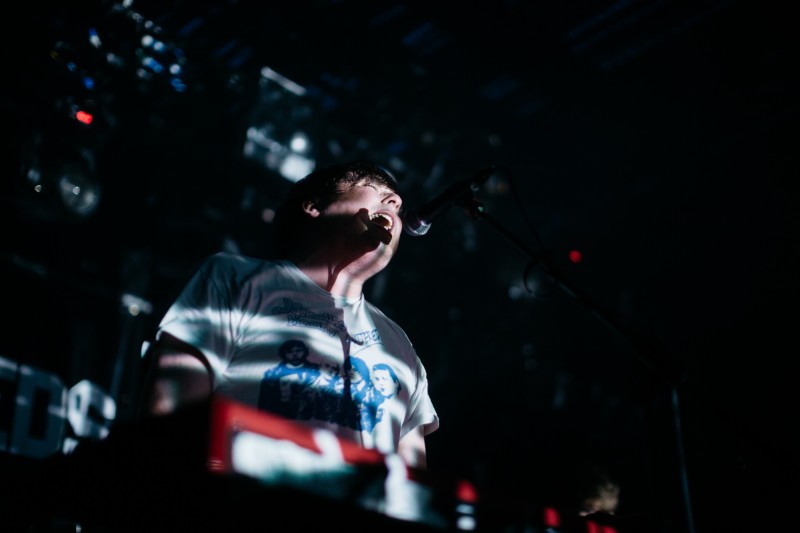 Back at the Union, Hookworms smashed it (as we knew they would) and we took another break for food as all the sprinting around Leeds had left us a little delirious. We found an amazing Mexican place called Cielo Blanco in the new shopping centre. We got a gorgeous platter between us and a jug of frozen margaritas – probably not necessary due to the rainy day, but loads of fun!

We finished the night with (who else?) but The Cribs. One of the biggest bands to ever leave Leeds – and to keep returning it! The Jarman brothers delivered as they always do, with the crowd losing it in Leeds Town Hall. The perfect end to a perfect day! We caught one of the last trains back to Manchester on a high – there was no better way to spend a bank holiday away.