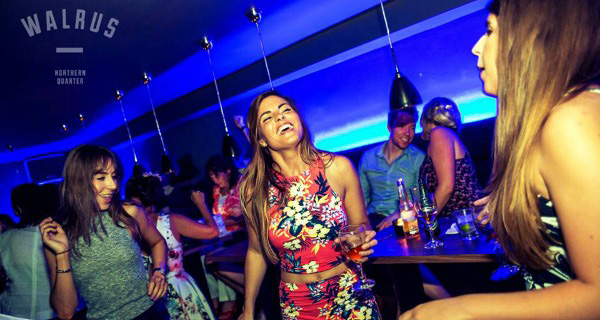 For those looking to party this August Bank Holiday weekend, we have a fantastic line-up of great music- from hedonistic Tiki madness at Hula, to live music at The Fitzgerald and Chalk to the best RnB, Hip-hop and House Djs at Walrus. 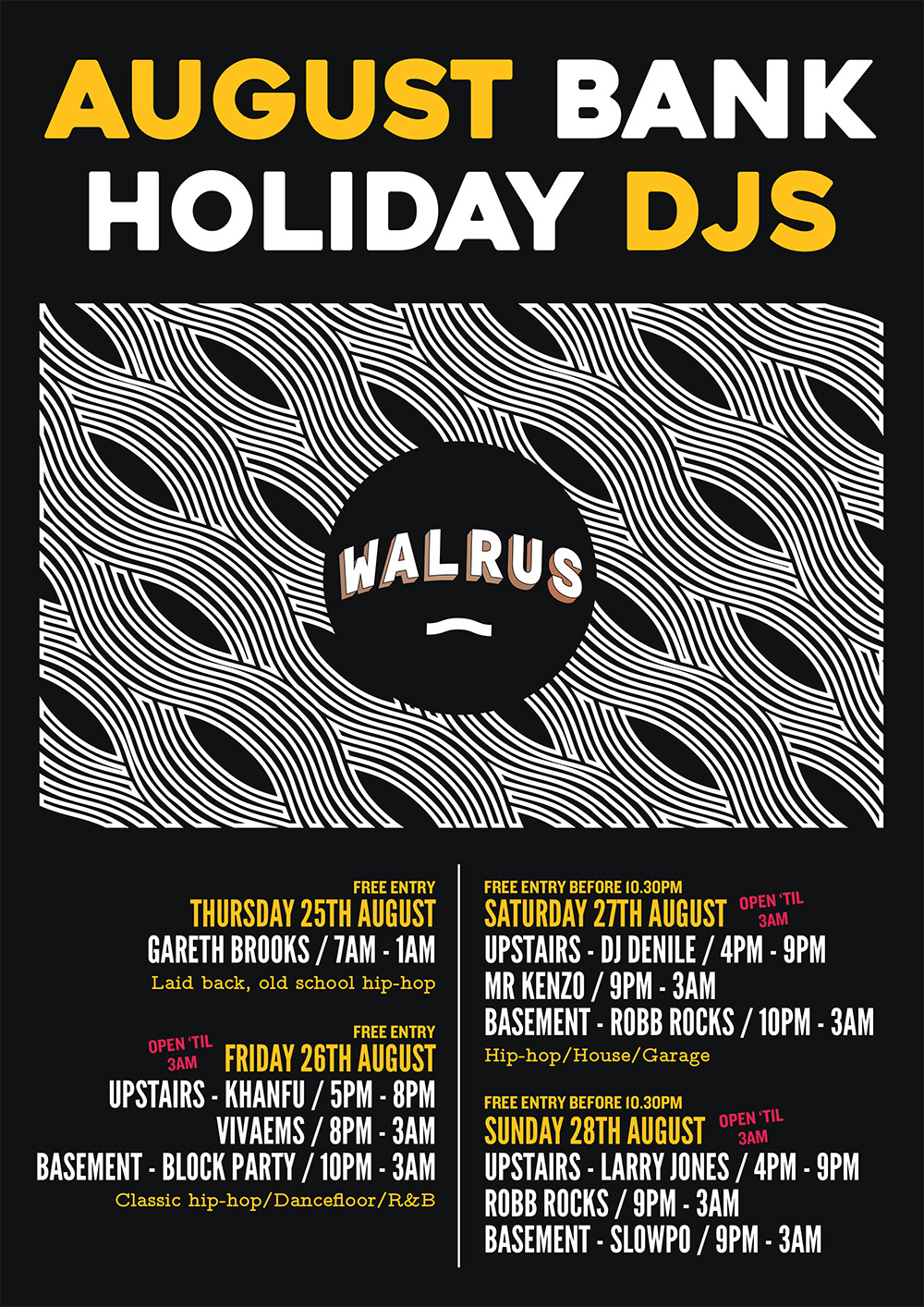 Music from the main bar will fill the air waves in alter-ego Tusk, located next door.

Thursday 26th – Gareth Brooks taking over the main bar with 90’s hip-hop and RnB anthems ‘til 2am.

Friday 27th resident DJ VivaEMS will be spinning her funky house and party classics in the main bar and Block Party will take over the basement club with its weekly mix of ratchet R&B, hip hop bangers and dance floor fillers.

Saturday 28th is going to be huge! With Mr Kenzo pumping out RnB classics, anthems and rap in the main bar. While Rob Rocks will host the newly refurbished bar with RnB, house and garage to shake your booty to.

To get over a weekend of partying and get ready for the next one get yourselves to Hangover Club on Bank Holiday Sunday – with 50% off food!

From 12 noon you’ll get hangover food, drink and music to mend the mangled mind. That’s a brunch menu packed with eggs, avocados, breakfast calzones and loaded fries and mimosas, bloody marys and breakfast zombies to wash it down with, and a DJ from 2pm to get ready for the next party! 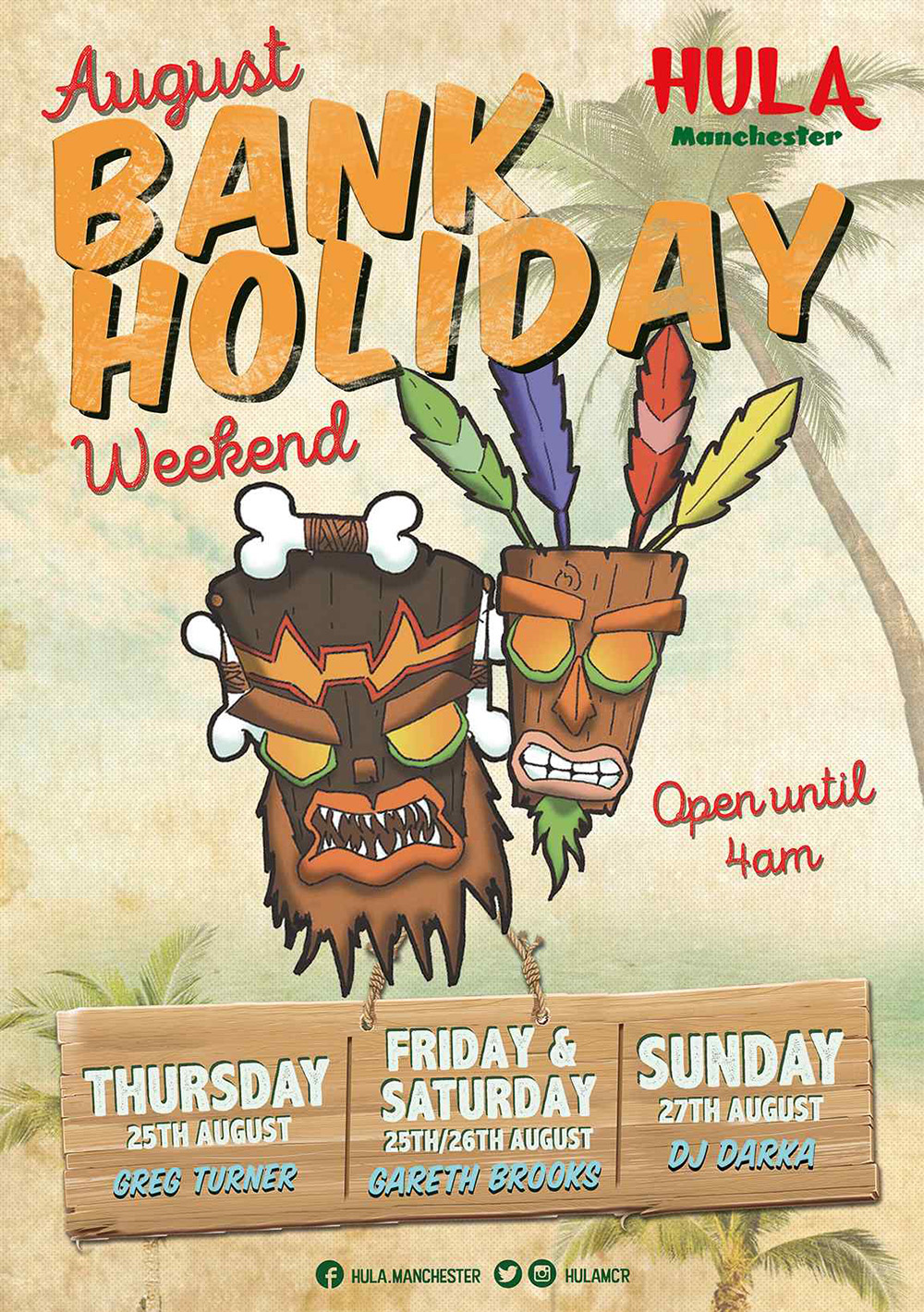 The original and the still the best Tiki experience in Manchester, Hula Manchester has a weekend of crazy, hedonistic fun lined up for the Bank Holiday weekend, kicking off with Heavy Jams from Greg Turner on Thursday 25th August – a mixture of hiphop, RnB, funk and soul to get Zombied to.

On Friday and Saturday, resident DJ and man about town, Gareth Brooks will host his legendary party nights, which promise to be two of the most fun-filled and craziest parties of the weekend – get in quick though as the queue is usually around the block!

On Bank Holiday Sunday, there’s a special set from Hula favourite Darka, who will return for one night only to host a special party night, with 90’s hip hop and RnB grooves to finish the weekend off Hula-style.

If you’re still going by Bank Holiday Monday, Bad Osiris will be on the decks spinning feel good vibes from 10pm and with 2 for £10 cocktails, everyday is a holiday at Hula Manchester. 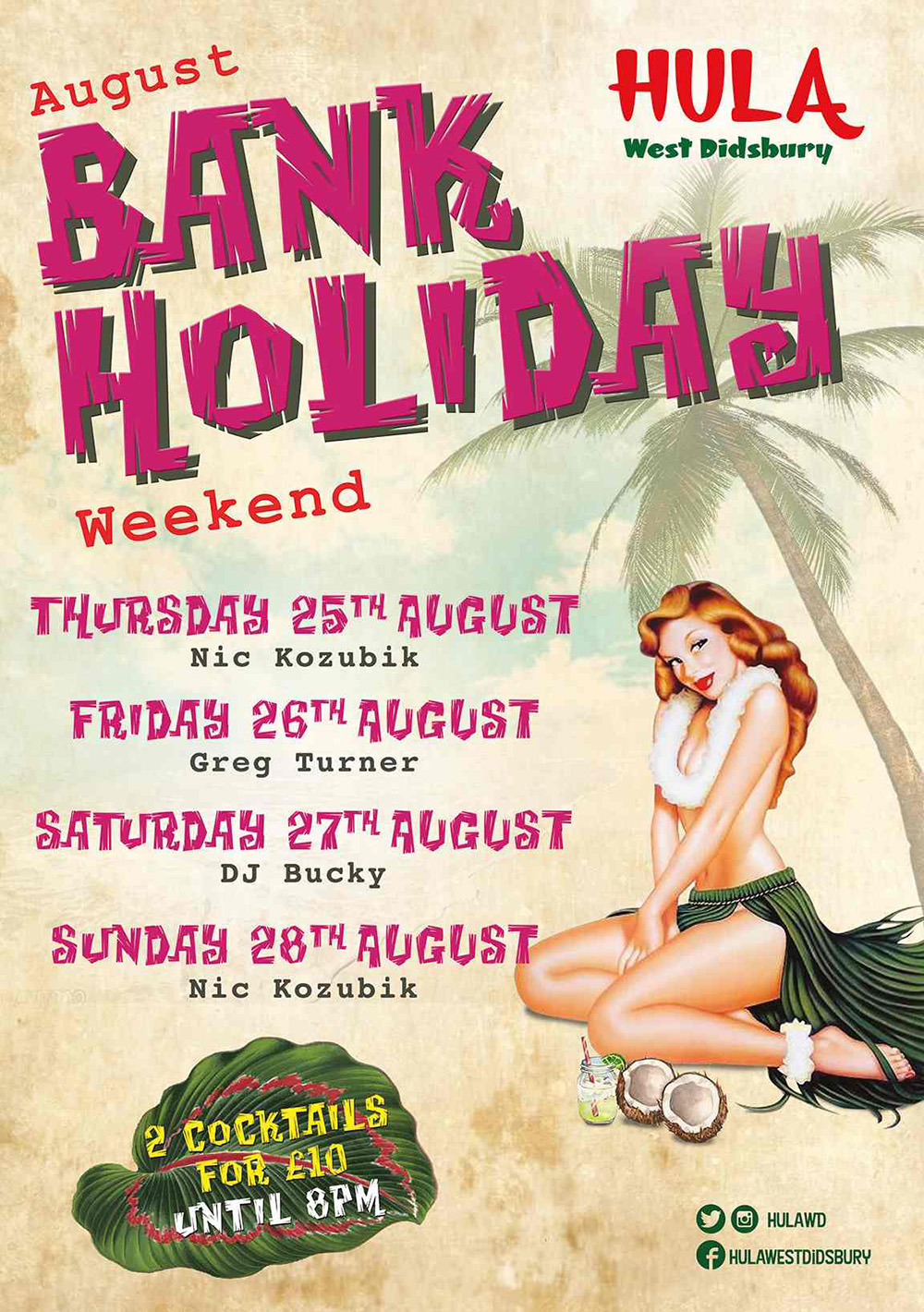 If you’re staying in the ‘burbs’ for the August Bank Holiday weekend, but looking to party, then head to Hula West Didsbury for the full tiki experience.

Smaller, but just as crazy as its big sister Hula Manchester, there’ll be Zombies flowing all weekend long with 2 for £10 on all cocktails until 10pm, and a mix of dance floor fillers to hip-hop, reggae and everything in between from a stellar DJ line-up from Thursday through Sunday.

Get ready for a massive weekend!

Hula West Didsbury offers 2 for £10 on selected cocktails until 10pm every night!

For more information see their Facebook page or www.hulabar.co.uk 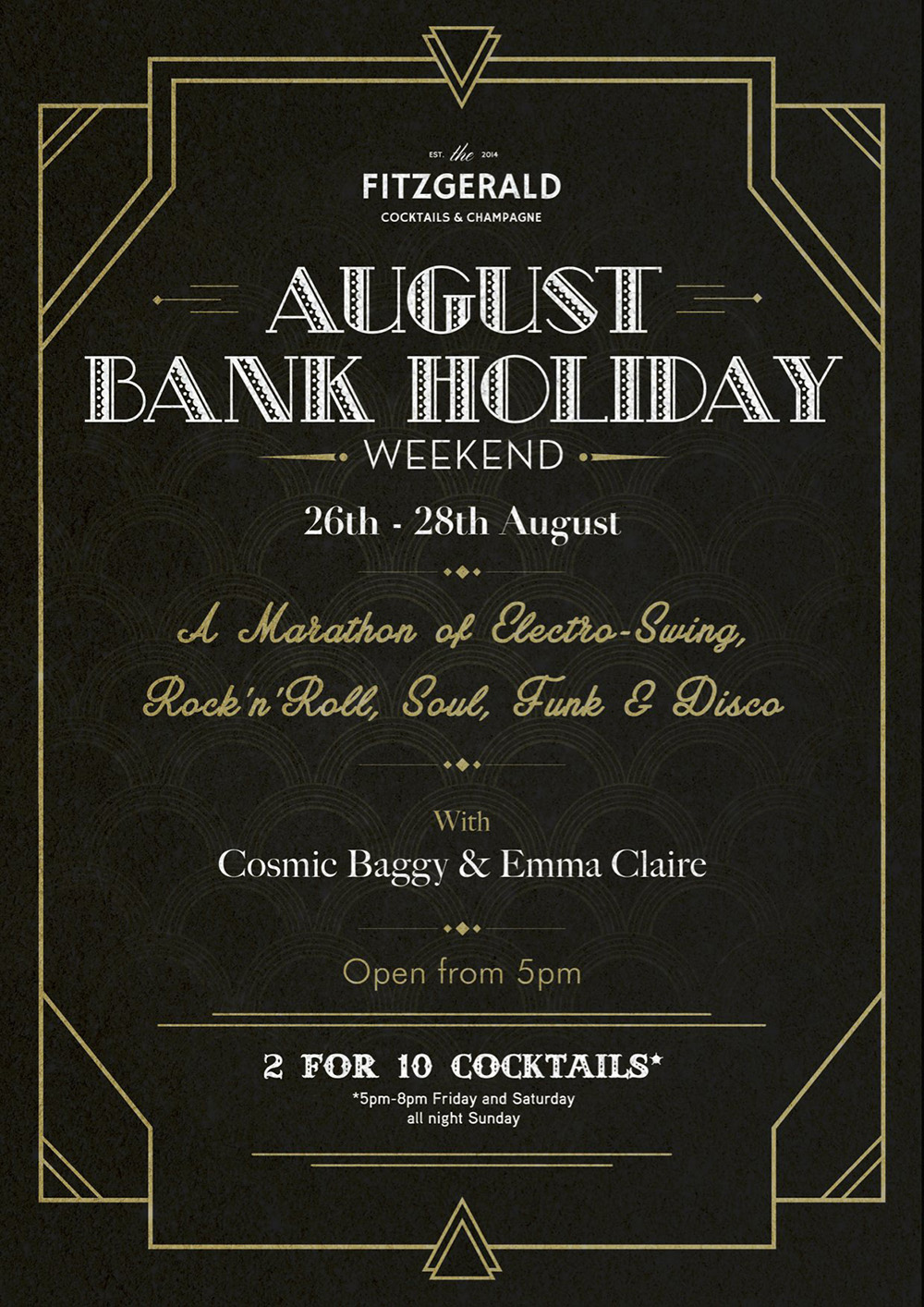 If you like your live music as much as you like a DJ, then The Fitzgerald is the place to be this August bank holiday weekend – with everything from Acid Jazz to Disco, Funk and Soul.

One of the best live music venues in the Northern Quarter, The Fitzgerald plays host to some of Manchester’s best new music with a weekly Open Mic night for upcoming artists and “Live at the Fitz’ on Thursdays – with more established musicians playing an eclectic mix of everything from jazz, to blues, folk, funk and soul.

On Thursday 25th August Jamie Barrowdale will be singing live. A young singer- songwriter, and relatively new on the Manchester music scene but one to watch! His rapping style creates a huge live sound, and his diversity in musical influences can be heard in his songs – don’t miss this!  FREE entry and 2 for £10 cocktails all night.

Friday  and Saturday will see resident Djs Emma Claire and Cosmic Baggy hit the decs and bringing the party with a weekend marathon of electro swing, jazz, funk and disco until the early hours.

On Sunday, Emma Claire is back, with an extended license to until 2am because, well, a little party never killed nobody.

So if you’re looking for something a bit special, a classic amongst the masses, then you must experience The Fitzgerald this Bank Holiday weekend.

The Fitzgerald will be offering 50% off drinks between 5m and 7pm across the Bank Holiday weekend and 2 for £10 on selected cocktails.