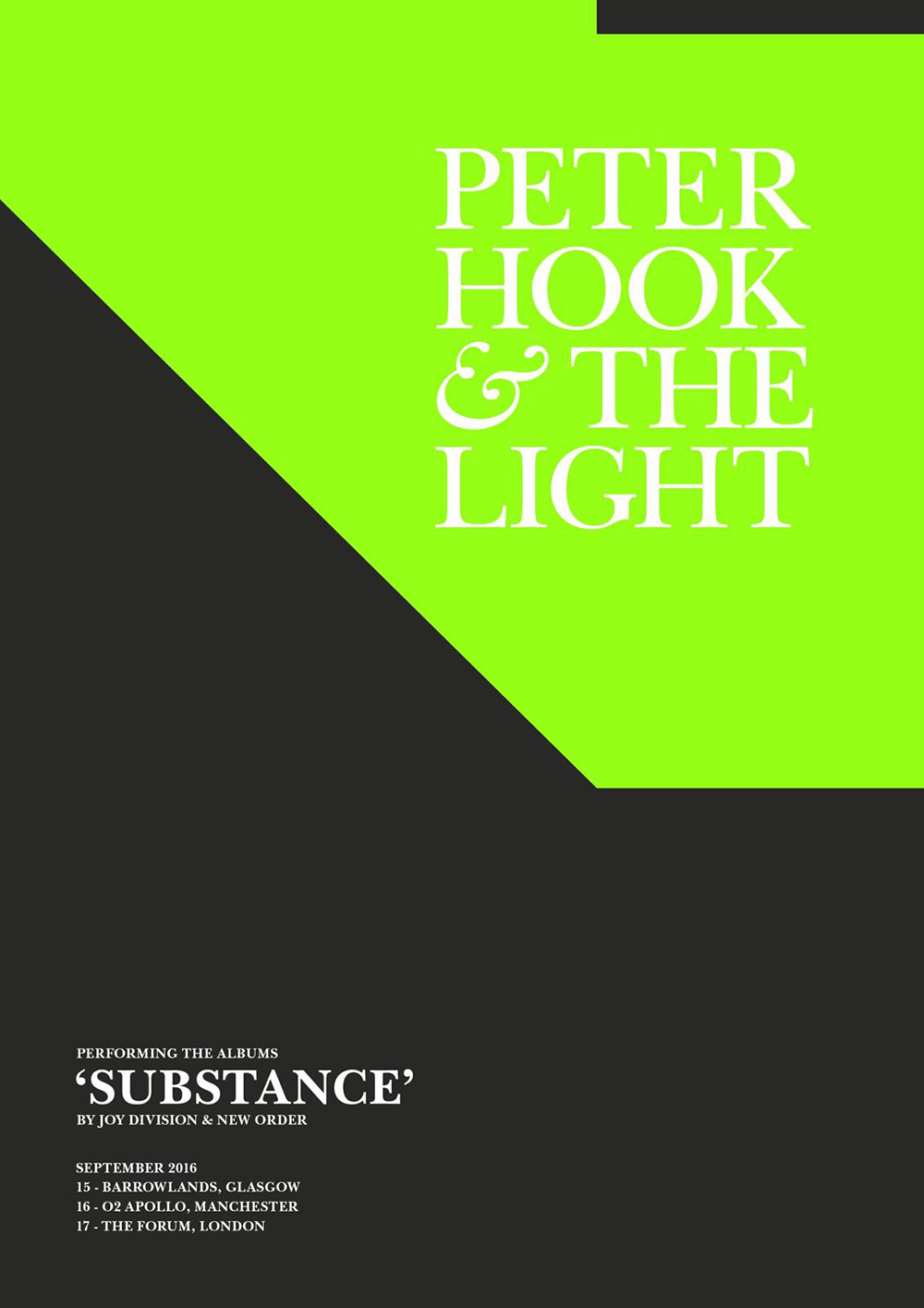 Live Here Now are to record and release Peter Hook And The Light’s full live set from this Friday’s homecoming 02 Apollo Manchester concert where they will perform “Substance – The Albums Of Joy Division & New Order, as part of their first run of dates.

Featuring the entire show, beginning to end, the first copies of the three CD album will be turned around and available immediately following the concert on Friday 16th September 2016. Pre orders will be shipped on Monday 19th September when the recording will also be made available for download.

The album marks the sixth collaboration between Peter Hook & The Light and Live Here Now as they have charted the band’s progression through Joy Division’s and New Order’s catalogues since 2010, releasing Live At Goodwood, The Hebden Bridge Tapes and the So This Is Permanence Macclesfield concert

To pre-order the Manchester concert or for the previous releases, check here.

With this being the week of the shows, there are only a few remaining tickets for The Light’s debut performances of the Substance LPs in Glasgow, Manchester and London.

Released in August 1987, New Order’s Substance was originally conceived as a way for Factory Records boss, Tony Wilson, to play the New Order singles on the CD player of his new Jaguar car. Substance became the best selling New Order album ever upon its release, the double LP going on to sell 2 million copies in America alone.

Widely considered New Order’s strongest album, “their most popular, well known, highly rated and arguably the most influential” (Sputnik Music), Factory Records’ 200th release featured the bands seminal 12″ mixes of their singles as well as versions of ‘Confusion’ and Temptation re-recorded for the LP.

Running from “Ceremony” in 1981 up to “True Faith” in 1987 (again recorded especially for the album), the set takes in the high points of New Order’s catalogue, including “Temptation”, “Thieves Like Us”, “The Perfect Kiss” and “Bizarre Love Triangle”.

Released the following year in July 1988, Joy Division’s Substance features all the singles which did not appear on the albums such as “Transmission”, “Komakino”, “Love Will Tear Us Apart” and “Atmosphere”, as well as their b-sides, tracks from their EP “An Ideal For Living” and the Factory Records sampler.

Factory Records’ 250th release, it begins with “Warsaw” and takes in the development of the band through “Digital” and “Dead Souls” to the band’s final tracks. The collection demonstrates the same energy as a full length LP with several key B-sides added.

Allmusic called it “the best adjunct to the two albums anyone could want.”   1

Peter Hook & The Light have toured Joy Division and New Order’s albums extensively since debuting “Unknown Pleasures” back in 2010 with dates all across the world which have been very well received by critics and fans alike. (See below for review quotes.)

Videos and concert footage from The Light

“Substance, in all of its 17 tracks, provides the perfect snapshot of the all-too-short career of the post-punk legends… Although an entirely different experience from either Joy Division  album, Substance is a perfectly ordered compilation with nothing but amazing singles filling up its 60+ minute running time.” Sputnik Music

“This assemblage of 12-inch singles and remixes charts New Order’s transformation from gloom rockers to electro-disco pioneers. Club hits like “Blue Monday” and “Bizarre Love Triangle” are full of bass melodies that beat-loving guitar bands are still trying to figure out.”

“Although the group enjoyed many great moments after this point, Substance should still be their time capsule release. Almost taken for granted, the way New Order brought the underground dance sounds of the US to the indie mainstream could well make them one of the most significant groups ever.” BBC Music

On Peter Hook And The Light Live

“Peter Hook & The Light have developed into a well-oiled machine that – whisper it – actually deliver these songs better than the current line-up of New Order….they’ve become an impressive tour de force more than worthy of associating themselves with arguably two of the finest back catalogues in rock and roll history.”  Drowned In Sound

‘A masterclass in euphoria and heartache in equal measure…. The chronology of the set played perfectly as high spirits continued to grow right up until the end of the show.” Gigwise

“This is New Order reinvigorated, reenergized; Hooky has arguably reclaimed the songs and is delivering them with heart and soul.” – Louder Than War

“It was certainly one of those special shows were the venue, artist, and fans all clicked perfectly to make for a very memorable experience and a blazing hot and awesome show by a legendary artist and performer, who in my opinion is the heart and soul of New Order keeping the most authentic live performance of their music alive for old and new fans.” Rock Subculture

“By focusing solely on the music, and allowing the songs inherent structure to do the heavy lifting instead of blowing them up into pseudo-stadium cuts, their inherent virtues were that much more apparent. Frankly, these songs rock…..This is Peter Hook and his band taking a chance, dusting off wrongly ignored tunes, and kicking ass. “Punk News