Staring at the walls of a hospital waiting room, we can soon come to appreciate the photography that hangs on the walls, brightening an either tense or wearisome part of our day, yet we seldom wonder how our mood might be different without it.

Photographer, Craig Barker, is one of the men responsible for these uplifting pieces of art, keeping patients contented in spite of pain and discomfort, and has contributed some two hundred pieces of work to the Spire Health Group’s new flag ship hospital in Manchester.

The commission is one of the largest Craig has taken on, even though he has completed work for big companies such as Siemens, Renaker, and Arbuthnot Banking Group Plc.

Craig explains: “They have been great people to work with. The brief was really just ‘Manchester’, but they knew my style and trusted me to produce something memorable.

“It was quite a responsibility, so I felt a real sense of achievement when I delivered the commission.”

Craig is a proud Mancunian, having been born at St Mary’s Hospital on Oxford Road, and grew up in nearby Withington, providing him with the love for the city which would remain his artistic muse for years to come. 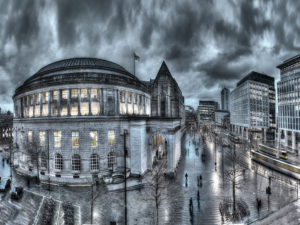 In his youth, Craig enjoyed the cinema and lived in close proximity to the Scala Cinema whose imagery had a profound effect upon him, motivating him to produce similar spectacles through photography in later life.

He recalled: “I got my hands on a camera, when I did a swap for my dad’s watch, with some kid down the road. I spent the afternoon looking through the view finder, framing everything.

“It was like my own private cinema. I had to swap it back in the evening, when my dad came home.

“I like my photography to have an edgy, almost cinematic, feel. A tiny movie, if you like? A big thrill that spins out of this for me is when something is revealed about the scape, be it land, sea, or city that is unexpected.”

Craig then went on to study photography and graduated with an Honours Degree, before working for various imaging companies, and eventually started his own photography business, Original Pictures Ltd, in 2004. 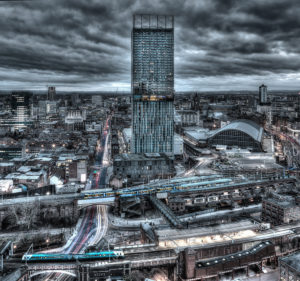 In his work, Craig tries to work on the edge of light and dark, at the extremes of lighting, and choses to use a long exposure so than not only a split second is captured but, in some pictures, captures up to several minutes.

Mr Barker added: “Many of my shots are taken when the lighting is poor or the weather is bad. I suppose growing up in Manchester, adapting to the weather is part of my DNA.

“Many of my images are conceived in my head, often a long time before I actually take them. When I see something, I work on it in my head before I ever get a camera out.

“I then go to the place and shoot it from all angles with the thought that I might miss something. The irony of this is that the image I use is always the first shot I take.” 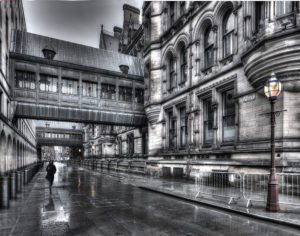 Craig’s parents grew up in the 1950s Hulme, in an estate of back-to-back houses, and would tell him stories of their time in this place.

His father was a black cab taxi driver and Craig, as a child, would often accompany his father, on his working days, in the well of the taxi (the space, low down, next to the driver seat) affording him a view of the people and the architecture.

Later in his career, Craig realised the effect that this experience, much like that of the cinema, ended up having on his decision to go into photography, and also in his work as a photographer. 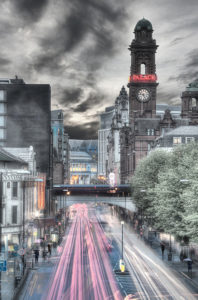 “Moving forward, I’m so fortunate to be doing something I love, I just want to keep on doing it. I want to keep on creating images that people feel an emotional connection with.

“I’m not a photographer who is looking for the perfect sunrise or sunset, where people look at it and say: “Ooh that’s pretty”, and walk away.

“I aim for the darker stuff that lies beneath and so I try to create images that resonate with people. There’s a lot of music out there, but I believe the music which touches us deepest has a minor chord.”

Craig will be showcasing his work at markets across Greater Manchester over the coming month, appearing at the Lowry Makers’ Market on the 25th of August and, to view more of his photography, you can follow him on Twitter and Instagram as well.