Review: Demi Lovato Showed Manchester Why We Should Love Her

Demi Lovato gave fans everything they could have wanted at her ‘Tell Me You Love Me‘ tour at Manchester Arena last night.

It’s been 10 years since we saw Demi star in the much loved Disney Channel Original ‘Camp Rock‘. Since then she has gone on to become a global super star and has shared with the world her struggles, such as her eating disorder and depression.

Demi kicked off the show with ‘You Don’t Do It For Me Anymore‘ as she rose from the floor to a flood of screams and cheers. The atmosphere was electric.

The American, who is very supportive of the LGBT community had a kiss cam element to her show. She told fans to kiss their neighbours no matter what the gender. This really got the crowd excited as eager eyes waited to see if they would appear on the big screen. 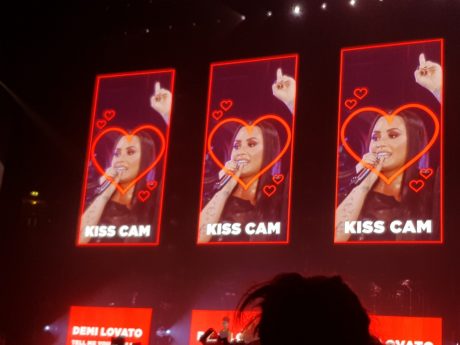 She brought sex appeal and realness to the stage singing classics like ‘Cool For The Summer‘ and ‘Give Your Heart A Break‘.

Jax Jones, was one of Demi’s support acts so it came as no surprise as he reappeared on stage for their song ‘Instruction‘. Demi also sang her new song ‘Solo‘ which she recorded with Clean Bandit and Louis Fonsi’s ‘Échame la Culpa’ where he appeared on the big screen behind her.

Manchester.. it was an honor to perform for you all. Thank you for being such an incredible audience.. you are so strong.. ?

The mood in the Arena then got a lot more emotional as fans held up signs to the song ‘Warrior‘ to honour the 22 people who died at the Arena at an Ariana Grande concert last year.

Demi, sat at the piano acknowledged this by referring to Manchester as ‘strong’ as the star had tears falling down her face. She then dedicated her song  ‘Skyscraper‘ to Manchester and to those that were tragically lost, as fans hugged each other and cried together.

Demi talked about the Manchester victims and the survivors and how it was their first concert back since the attack. She started crying. So powerful. pic.twitter.com/xm71jVltW7

@ddlovato thankyou for making last night everything I’ve ever dreamt it to be and more ? 11 years could not of been more worth the wait. I felt it in my heart that you would sing skyscraper for Manchester ?, I felt nothing but love in that entrie room, we love you so much ?

The night ended with her hit track ‘Sorry Not Sorry‘ and finally ‘Tell Me You Love Me‘.

Demi brought so much to that Arena last night, with her vocals on point and her sexiness through the roof. It also came across how genuine and real she is. I was defiantly in ore of the 25 year old.