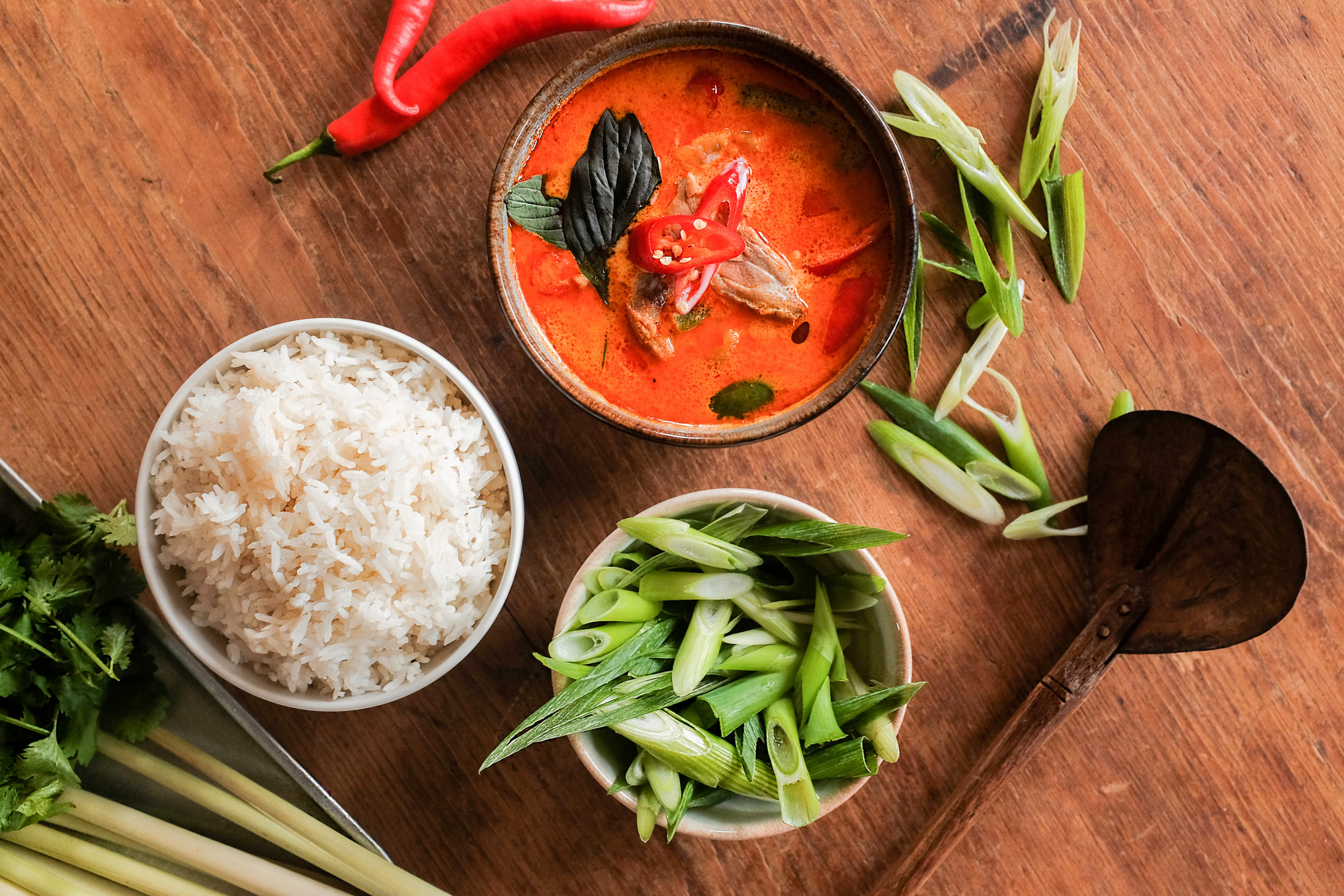 Going out to dinner on one’s own is, sadly, one of the last few activities that’s deemed to be largely a plural affair in London, along with going to the cinema, the theatre and the act of holding hands. A particular friend of mine, who is always so acutely aware of his surroundings, has actually cracked the whole cinema game. He simply takes a notepad and pretends to be a critic, scribbling indiscriminately whenever he feels the gaze of another. What a time to be alive.

Going to the pub solo, however, is a very normal thing even for the mad and aware – and it is a favourite past-time of mine. Why should I go to a coffee shop to write and get bored of pumpkin lattes when I can go to a boozer and booze? This was very much my plan when I arrived at the new Irish pub, Mc & Sons, in Southwark – settle down quietly in the corner with a pint of something Irish and crack on with something work related.

Two things scuppered that. Firstly, the fact that this pub, which opened in October, has quickly become THE place for a Christmas party and was heaving.

Secondly, Mc & Sons have a fantastic, authentic Thai menu that sent my red laptop and all thoughts of an evening of work back into my bag sharpish. 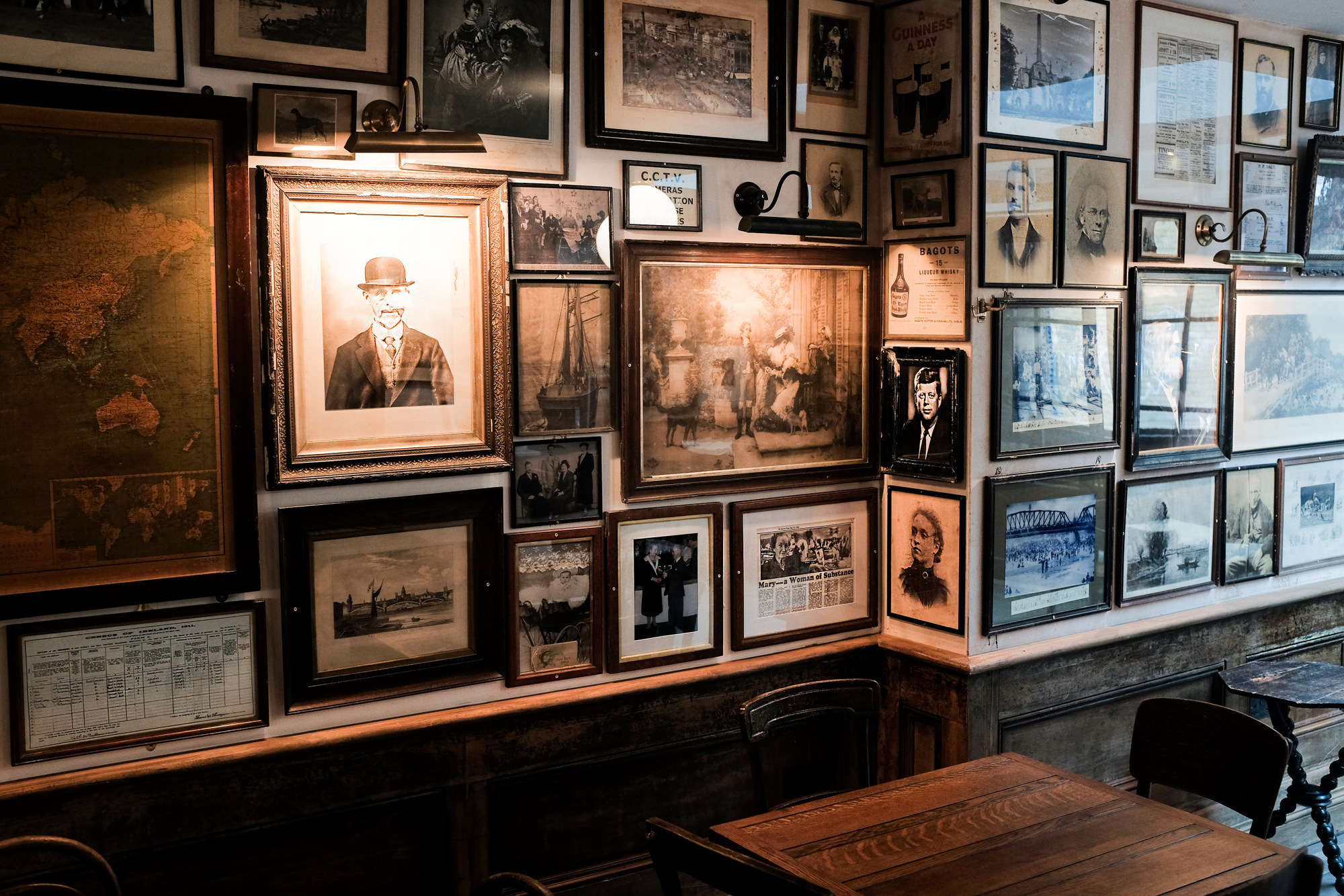 Refreshingly a family-run affair, Mc & Sons is the fifth opening from Windmill Taverns – a traditional pub group founded by an Irish father and his two sons. One of those two sons, Johnny, married a Thai woman named Lailar six years ago – a Thai woman who happens to be a fantastic chef. Lailar now oversees the food offerings in all of the pubs under the Windmill Taverns banner, with Mc & Sons mixing traditional Irish boozer and Thai kitchen.

Thai-rish, would be the genre. Luckily it’s not the name.

Inundated with all manner of trinkets, old timey photos and Thai paraphernalia; no cranny has been spared in Jack McElhinney (Mc) and his sons’ generation celebration. It’s a sight to behold, with a little snug booth to the right as you enter even holding a letter to Ronald Reagan sent by one of the family back in the day asking whether he might visit them during a trip to London. Reagan’s team replied, and the answer was no.

Had he been a fan of Thai food, and still around, then the 40th President of the United States would not have been amiss had he belatedly acceded to the McElhinney’s kind request of an audience and turned up today. The man who ushered in the national drinking minimum age of 21 in 1984 could have had the Gaeng Red Roast Duck Curry with a pint or two of Boundary Session IPA, just like me. 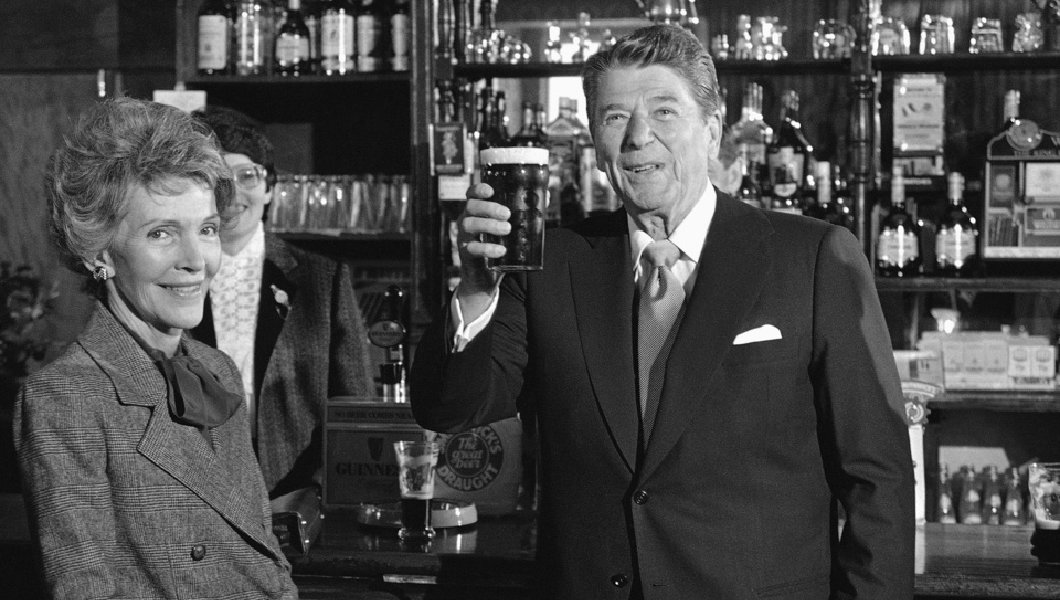 And what a curry it was. Arriving with moreish qualities the likes of which I thought could and would not ever hit an old school publican in London, and served by a Northern Irish waitress I immediately fell completely in love with; I made a promise to try and replicate this classic Thai red curry cooked with coconut milk and pineapple when I got home. I’ve made a Thai green curry from start to finish in a restaurant in Petersham and that had over thirty individual ingredients, so believe you me, this is no small matter.

The menu at Mc & Sons isn’t huge, and so it shouldn’t be. Your obvious are out in force, such as the Chicken Satay and the Pad Thai (either with chicken or prawns), but the authenticity of Lailar and her Thai kitchen really comes out with dishes such as the Kwatiew Pad Keemow and the Khao Soi.

The latter, a northern Thai curry with chicken on the bone, is typical of Thai mothers of the region and comes with two types of noodles, crispy and submerged. I asked my wonderful waitress about it and she told me that one of the chefs best described it as like Weetabix in that some people like it crispy and some like it soft.

It was spicy at any rate, with the chicken sliding drunkenly off their bones and into the rich curry sauce amid all manner of beans sprouts, noodles and foliage. It was exceptional, and it marked the first time I had devoured two main courses solo in one evening since an ill-advised trip to the Man vs Food restaurant in Hounslow for a stag-do. But this time, I had no regrets. Just a few pints of Irish cask ale to wash it all down with. 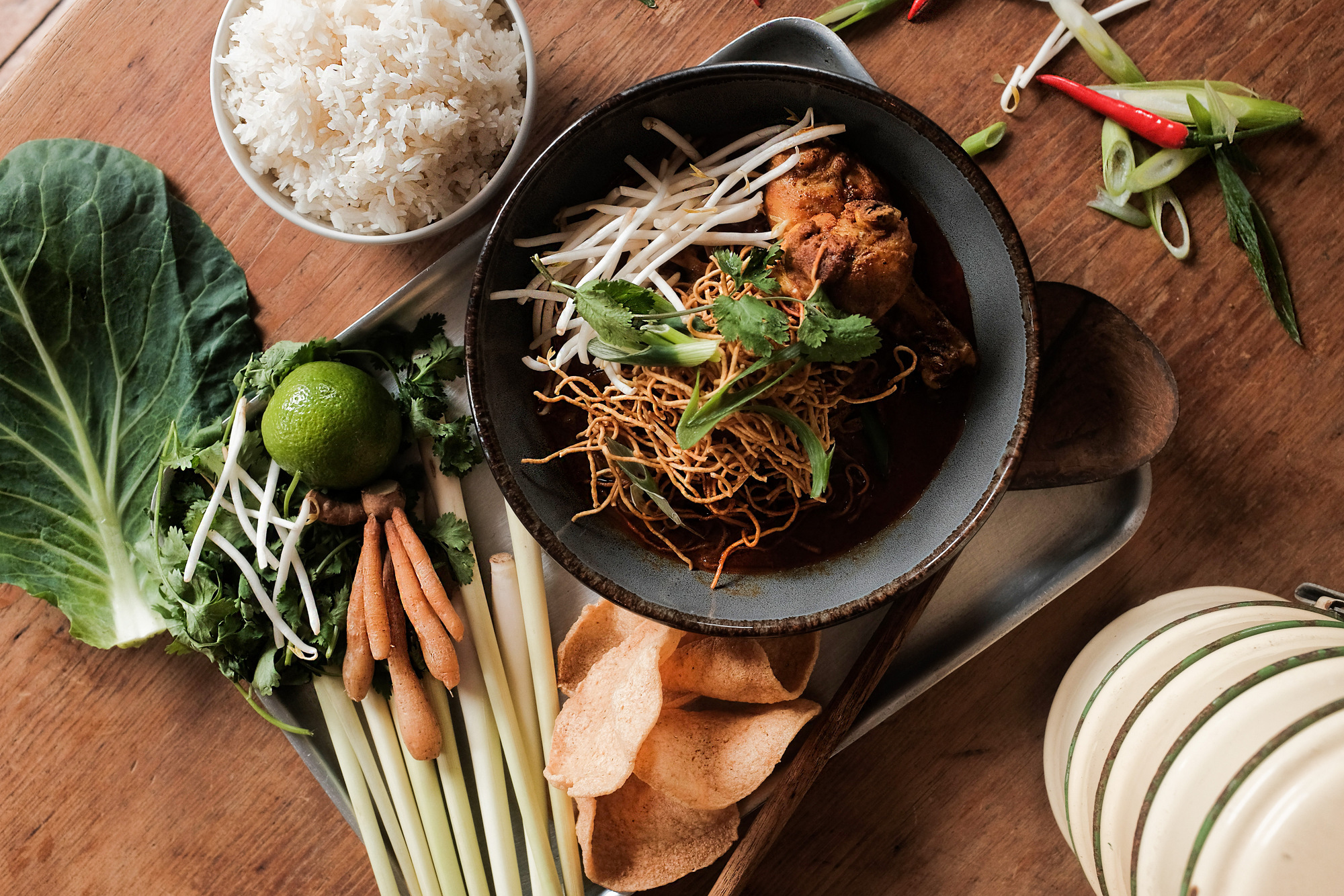 I couldn’t leave Mc & Sons without an Irish coffee and theirs was, as expected, boozy. Sipping away at it, I spent my time between people watching around the room as Christmas spirit was enjoyed in between ravenous bites of all things Thai, and the reading of a 1958 mercantile map of the world just behind me. JFK stared out at me from the opposite wall close to a black and white photo of Jack McElhinney bounding around Ireland with a few local lads, tipped to the brim and with matching hats.

Decades on and his son, Johnny McElhinney, could now be found proudly munching a Pad Thai at the pass with his wife as his little Jack Russell ran amok in this, arguably one of London’s best new additions to its merry band of pubs. 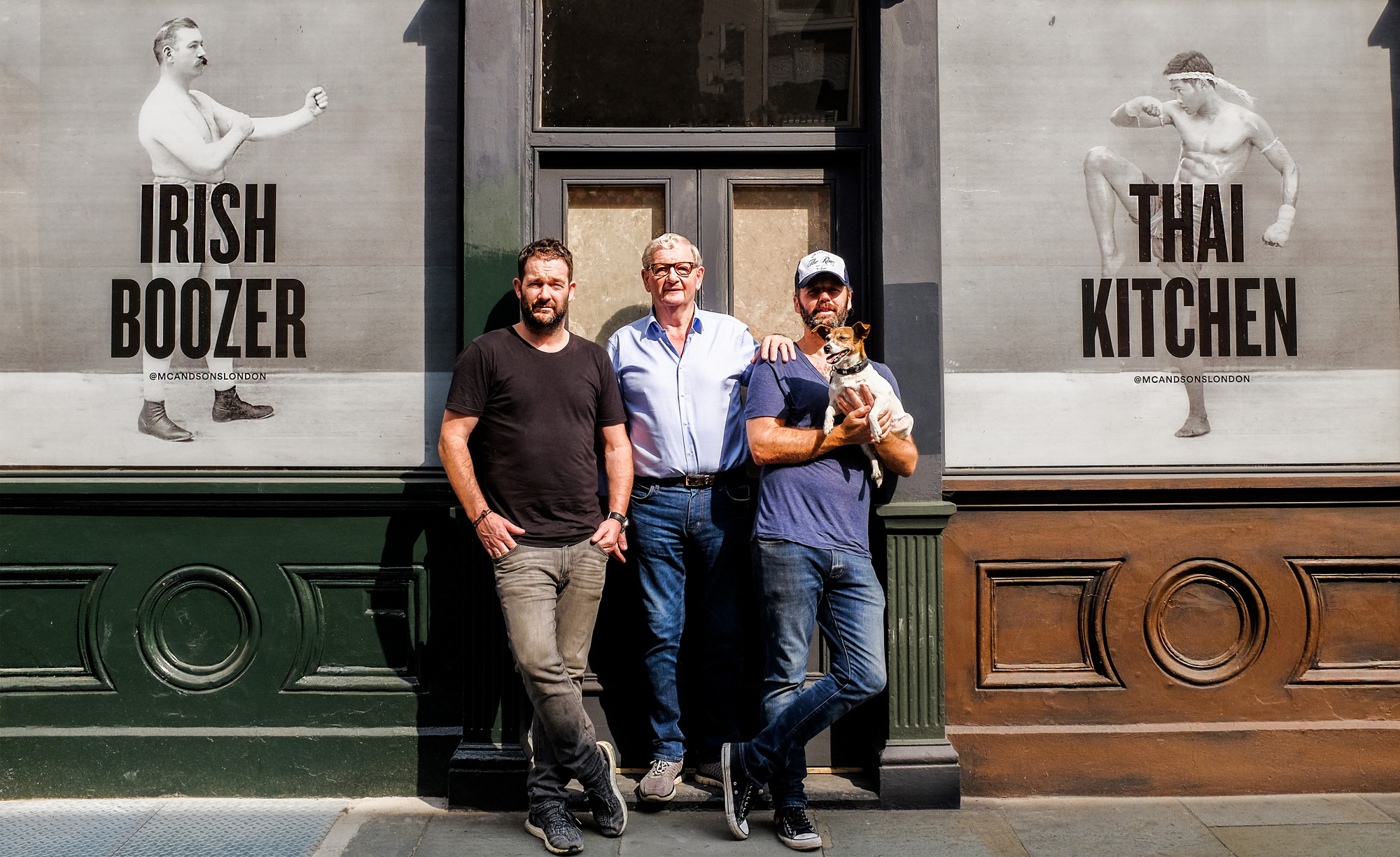