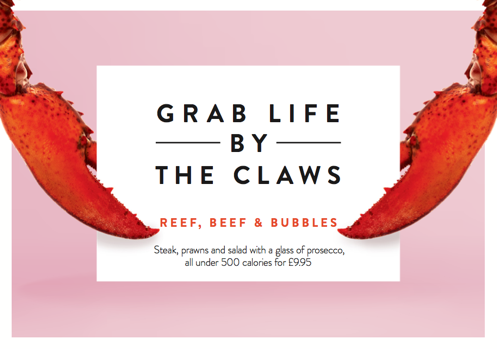 Drake & Morgan – the high-end, London-based bar chain – was first created with women in mind. Starting back in 2008 with their South London branch, The Refinery; Drake & Morgan aimed to provide London’s female community with a swanky but affordable place to booze and enjoy some of the finer things – things not often found in a sepia-toned, ash-strewn publican named after a dead duke, his appendages and his goose.

Flash forward ten years and Drake & Morgan is now a stable mainstay around the affluent areas of London, with branches in Manchester and Edinburgh. Not an exclusively female operation, it must be said, but always with a gentle hand on the pulse of what’s luxurious. For example, this January saw the introduction of their ‘Ginuary’, which surely needs no explanation, and the return of their ‘Reef, Beef and Bubbles’ deal.

This deal, which comes in two versions, threatens to be one of the best surf n’ turf deals to be found anywhere in London at the moment. And so, with a 6’5 policeman/companion tucked under my arm, I headed to The Drift in Moorgate’s Heron Tower for a cheeky bit of lobster. 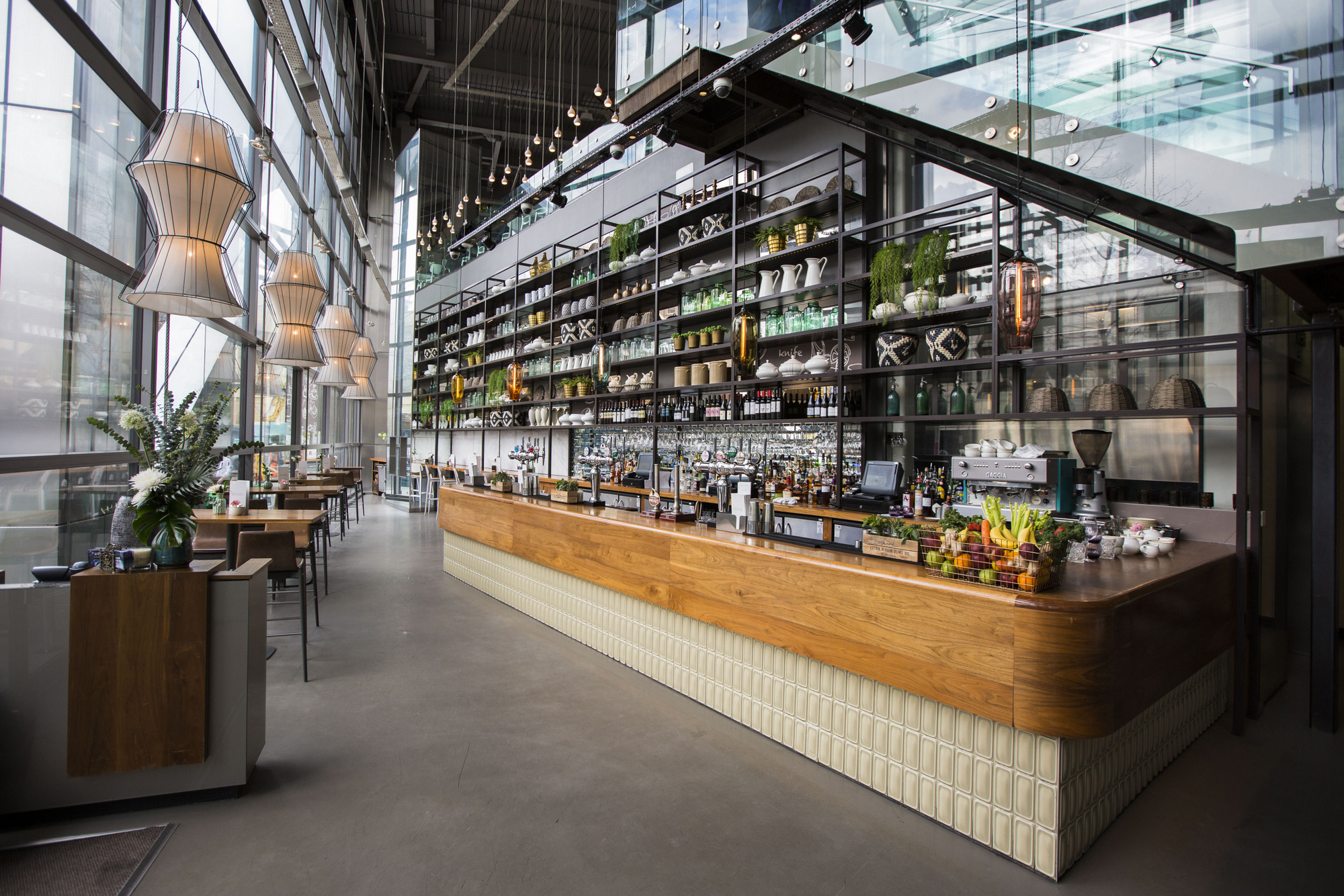 The Drift, like almost all Drake & Morgan outlets, is all angles, glass and ceilings. Strip out the tables and chairs and this could be one of Bruce Wayne’s pads in the sprawling heights of Gotham City. Dark metals, peculiar light fixtures, and everything else you expect to find in a modern bar in the financial district, including suits. It was a Thursday night and the clone army was out for a cocktail or two after work. Not loud and boisterous, mind you, just attractive and without tie.

The ground floor is bar and the upstairs is restaurant, and bar. A lift can take you up to the latter and, while not as stomach chucking as the lift up to the very top of the Heron Tower (the third tallest building in the whole of the UK), it’s still a surprisingly long way up.

After a bit of a goldilocks moment involving the many different types of chairs up in the dining area (my second tried to upend me a few times), it was time for a menu. And it was pretty funky, all purple swirly stuff, tentacles and forks. There’s a fair few things to be getting on with, including a gaggle of flatbreads and sharers, a flock of burgers and a roll of starters.

We were feeling famished so, before the event proper, attacked a few choice shards of chicken satay and an elegant portion of heritage beetroot with whipped goat’s cheese and walnuts.

And then it was decision time. 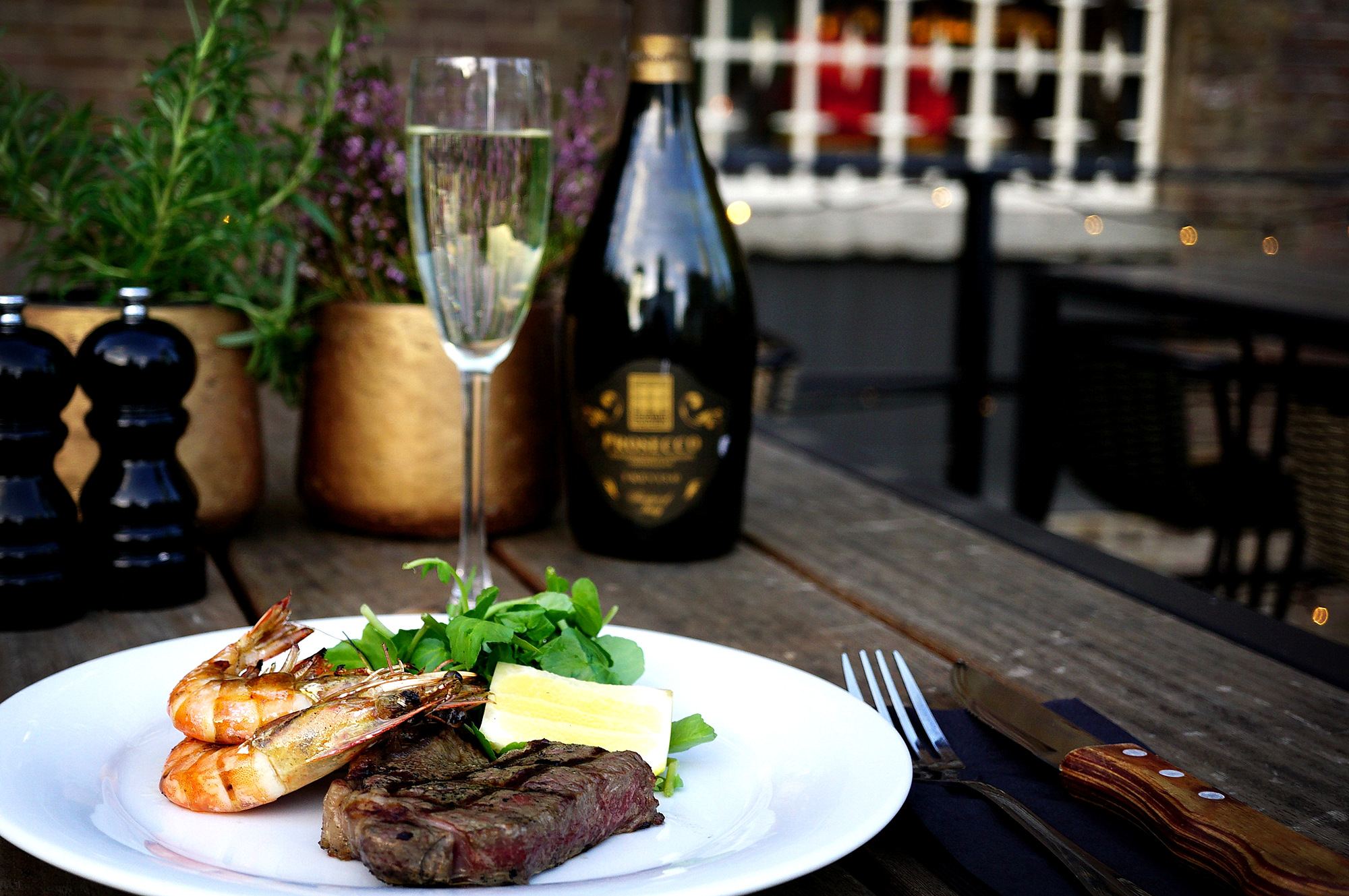 Reef, Beef and Bubbles: Version One – Steak, two king prawns, salad and a glass of Prosecco (£9.95)

Reef, Beef and Bubbles: Version Two – Steak, half a lobster, chips and a glass of Champagne (£19.95)

So it’s really a case of how hungry you are mixed with how broke. Either way, Drake & Morgan have very much got all bases covered here.

And despite our exploits with starters, there was no way we were going to pass up lobster.

It did not disappoint. Arriving with claws and legs practically spilling out over the side of the plate, and with accompanying cracker and pick cutlery, our respective half lobsters were full, buttery and littered with herbs. The chips were overflowing and the steak cooked a nice medium rare as requested.

The Champagne was a Pommery, the most expensive by-the-glass on the whole menu. 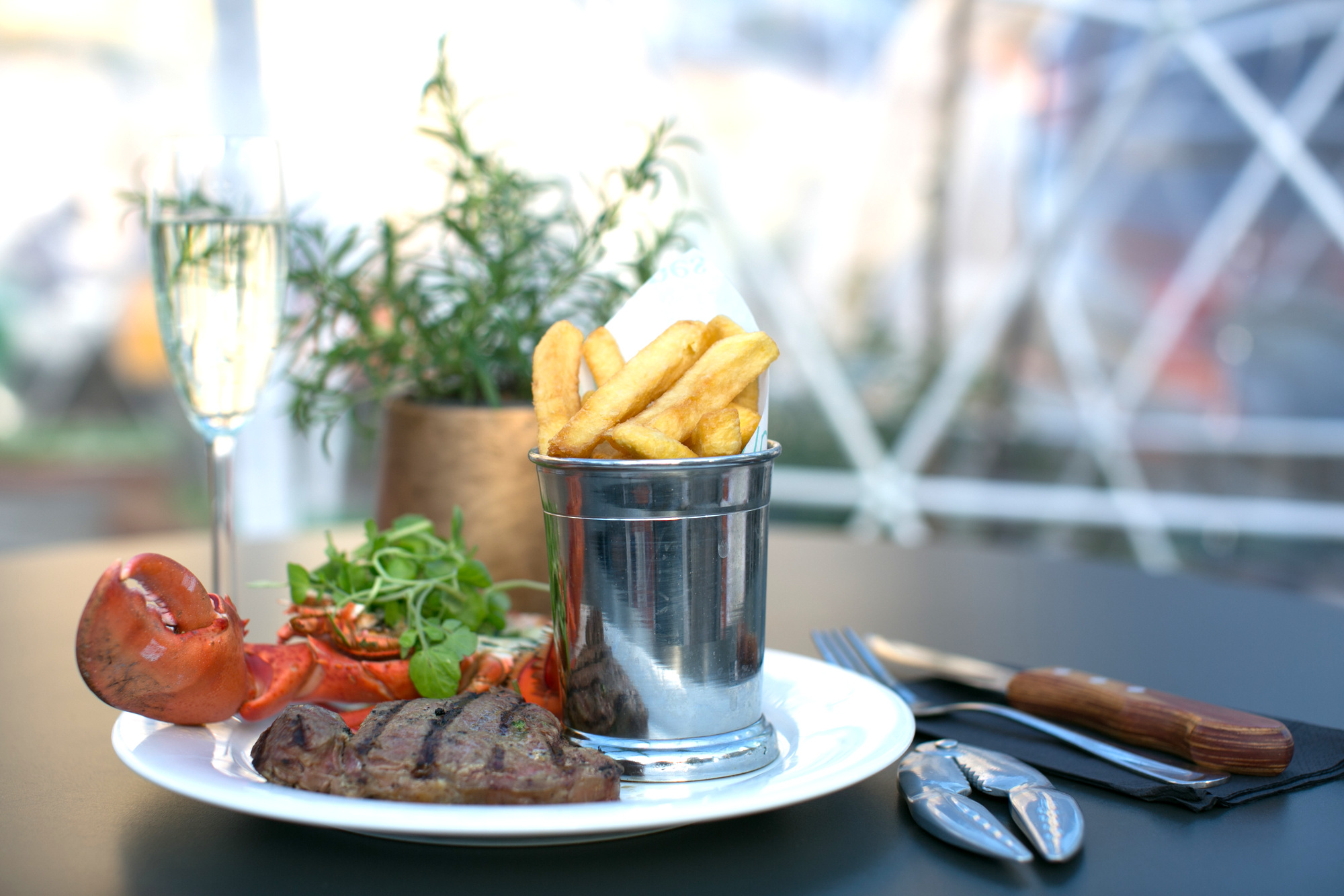 For under twenty quid, this was a rare treat and my companion and I whiled away the evening devouring our luxury while he recanted censored tales of recent police adventures including a lascivious lorry driver and the coming across of an unusual hat.

Remarkably still with room to spare (version one of the deal is actually just 500 calories), we squeezed in a classic chocolate brownie and espresso before trying out the lift again. Meanwhile the army of suits and mini-skirts continued their mild peacocking, fluffed and with cocktail umbrella.

With just under half of January still to go, there’s still realistically time for at least two more visits to lobster town. And with booze-free Prosecco around, even those mad enough to be attempting a dry January will be made to feel welcome.

There’s a good few dry Sauvignon Blancs in the wine list too. 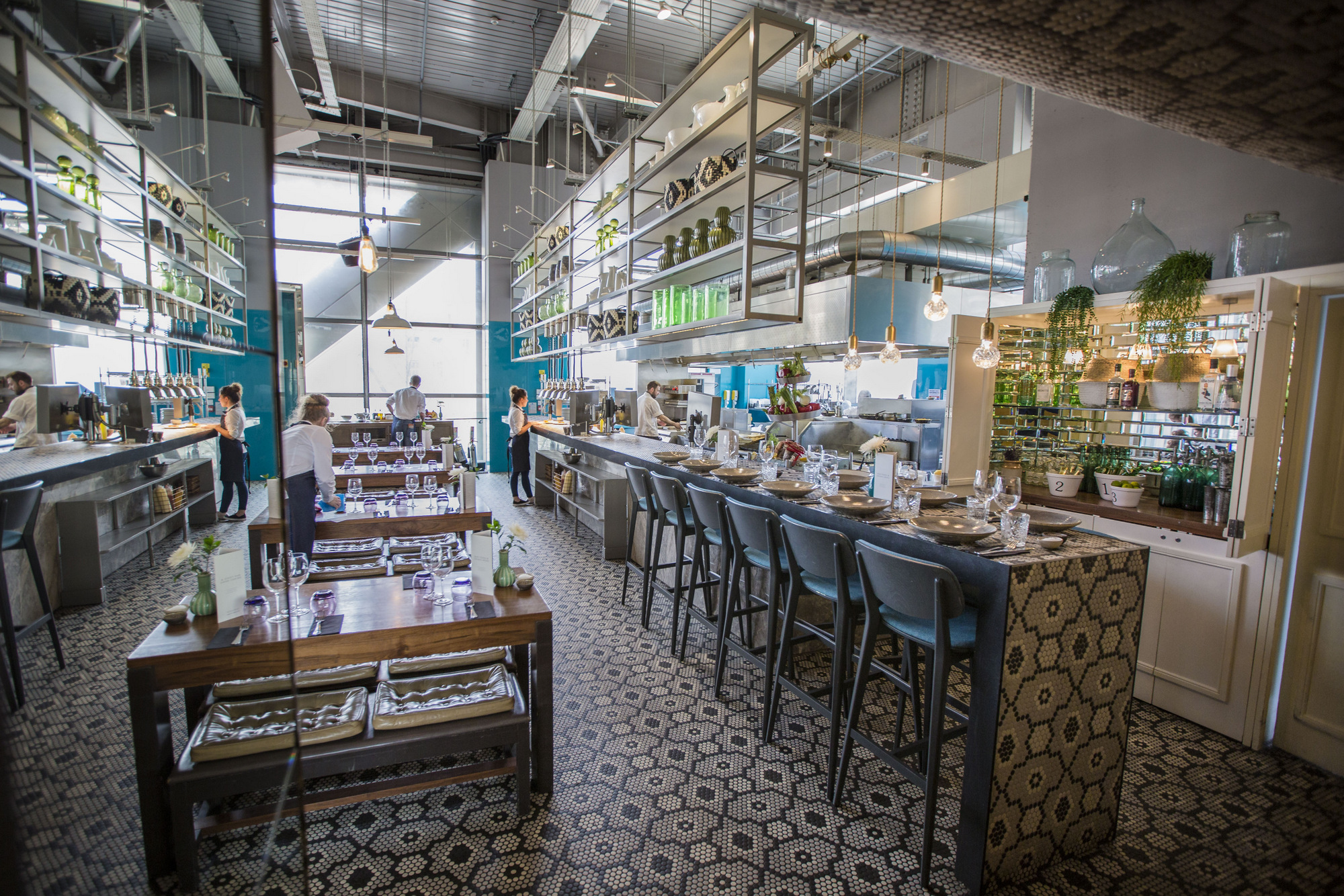