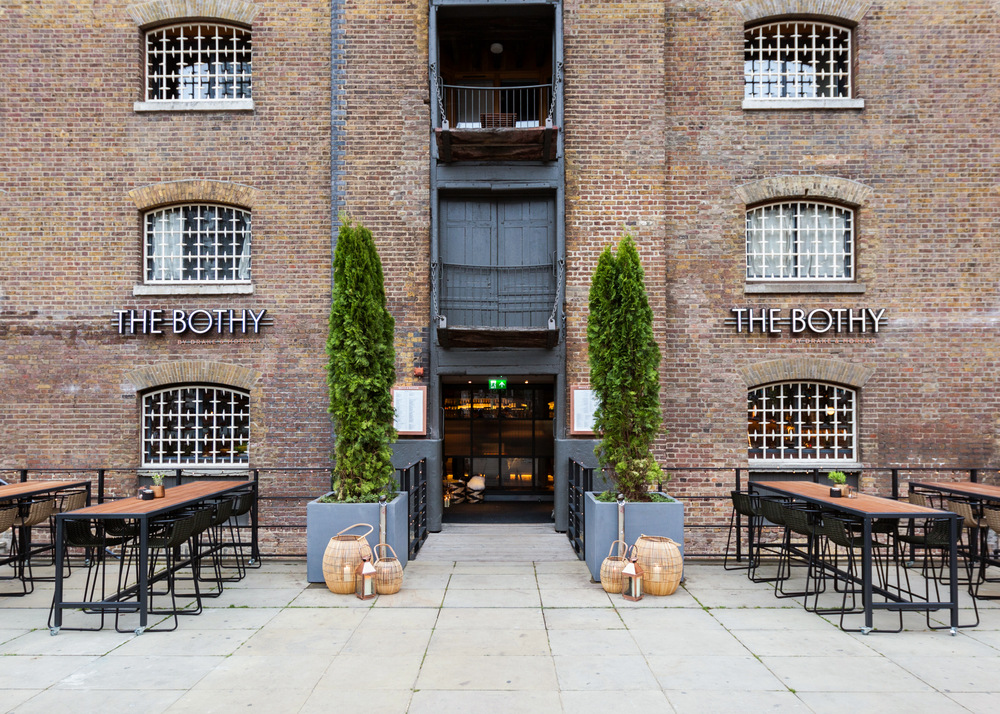 UPDATE AUGUST 2017:
The Bothy has now been renamed “The Sipping Room”

First things first, a big shout out to Google for clearing up my first and only real problem with The Bothy on West India Quay in East London. As I took a seat at one of the many outside tables just off the river with my dinner guest in the mid-afternoon sun, we realised that we were both at a real loss as to what a bothy actually is.

Google answered as such:

A Bothy: A small Scottish hut or cottage, especially one for housing farm labourers or for use as a mountain refuge.

And the summary of the restaurant?

The Bothy: An easy going, all-day Modern European restaurant and bar in a former warehouse with a riverside terrace.

Easy to see why the latter picked their name, then.

With that out of the way, and with the head waiter arriving with both a highly customised Hendricks and tonic for my gin connoisseur of a guest (luckily for them, they had cucumber) and a glass of the Pinot Noir, we took in the menu and enquired after our surroundings.

The Bothy opened at the beginning of May, is the latest addition to the armoury of the London bar group Drake & Morgan, and has room enough for 200 people to sit outside. This is al fresco dining after a session at the gym and, despite London possessing of some of the most up and down summers around, The Bothy is clearly one of the best spots to find on a sunny/cloudy/chance of hail day in the capital.

And, quite knowledgeably, the staff are on hand with blankets and hot water bottles should the weather have a one of those quintessentially British moments and start sprouting thunder and fish. 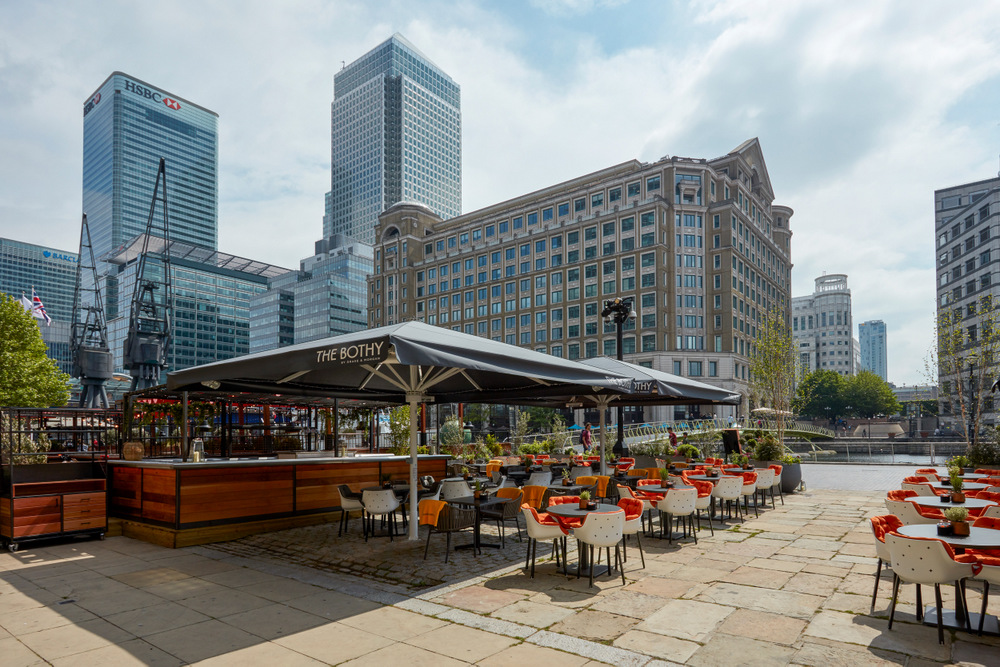 Being part of a bar group, the drinks are certainly covered. Over thirty cocktails have found their home at The Bothy, which sits on a bustling boulevard containing a growing number of other bars and restaurants. Their Candy Shop cocktail – a mix of Tanqueray gin, rhubarb and custard liqueur and lemon – is sure to be a hit, while their attempt at a classic whiskey sour drew internal applause in between sips from this here journalist.

But what of the food? We’re talking all day Modern European dining, as Google pointed out, so it was no surprise to see flatbreads and salads, steaks and burgers, curries and chicken satay all inhabit the menu.

There really is something for everyone here as you take shelter in the hut on the mountain, and we got the ball rolling with pre-starters from their ‘While you Wait’ section: Padron peppers and classy sourdough with salted English butter. Olives and smoked almonds are also found here. An interesting touch, spreading things out to avoid what can often be, in most restaurants, a rammed pan-global list of starters and nibbles.

With your pea and lemon risottos, roast chickens with chimichurri, and broad beans, ricotta, lemon and mint on slices of toast; the menu at The Bothy is all kinds of pan- European, with proper British staples such as beer-battered haddock and bangers and mash standing as firm foundations.

And nothing says gastropub more than a chorizo scotch egg with smoked paprika mayonnaise, so that’s just where we started. 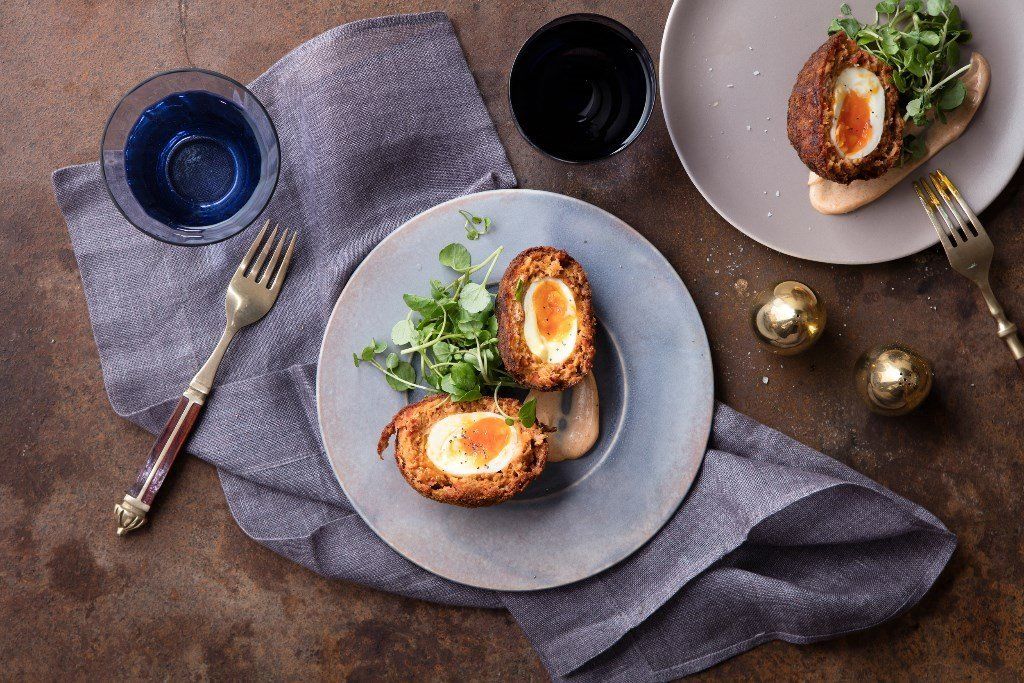 I’m always making scotch eggs, being a chef in a gastropub myself, and I have to say mine pale in comparison to those found at The Bothy. With a rich, dark yellow yolk, oozing chorizo speckled with pepper, and a crisp shell; I had to hold my hands up, take a pic, and send it off to my head chef for feedback/an envious emoji.

Another H&T and glass of wine later and it was time for mains. I let an old school bangers and mash out to play while my dinner guest went a bit more Italian with the pan-fried cod with crushed potato and artichoke gremolata.

Marooned on an island of herb-strewn mash around classic onion gravy; my bangers did not disappoint. You can have your sous-vide soup and aerated turnips – few can match sausages and mash done right.

Her cod, meanwhile, was a fantastic example of the skill of those in the kitchen. Perfectly intact, soft and juicy; its little wonder that our waiter arrived back at our table to clear with a knowing smile already creeping across his face.

With the evening ticking on, The Bothy was getting busy, but tables and chairs still remained throughout. That’s how big it is. Feeling the threat of rain, we popped inside to finish the evening.

The Bothy is as big inside as it is out and, with faux-fur draped over chairs, a wood- beamed ceiling and assorted vegetation perched in alcoves in the walls, I have to admit that it’s rather close to how I’d imagine the inside of a Scottish hut on the side of a mountain to look – if it was Elton John’s bothy, that is.

I doubt you’ll find another bothy that serves as good a chocolate brownie and lemon tart as the one’s we devoured while watching ‘late sun and risk of drizzle’ turn rapidly into a swarm of locusts and solar eclipse.

Cue blankets and hot water bottles. The Bothy’s got you covered. 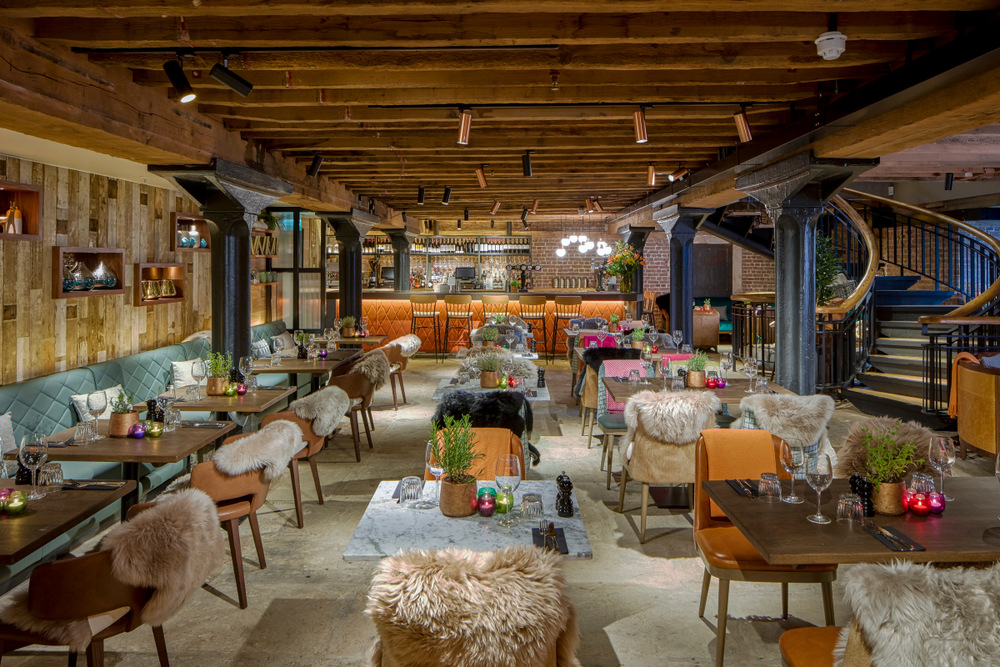