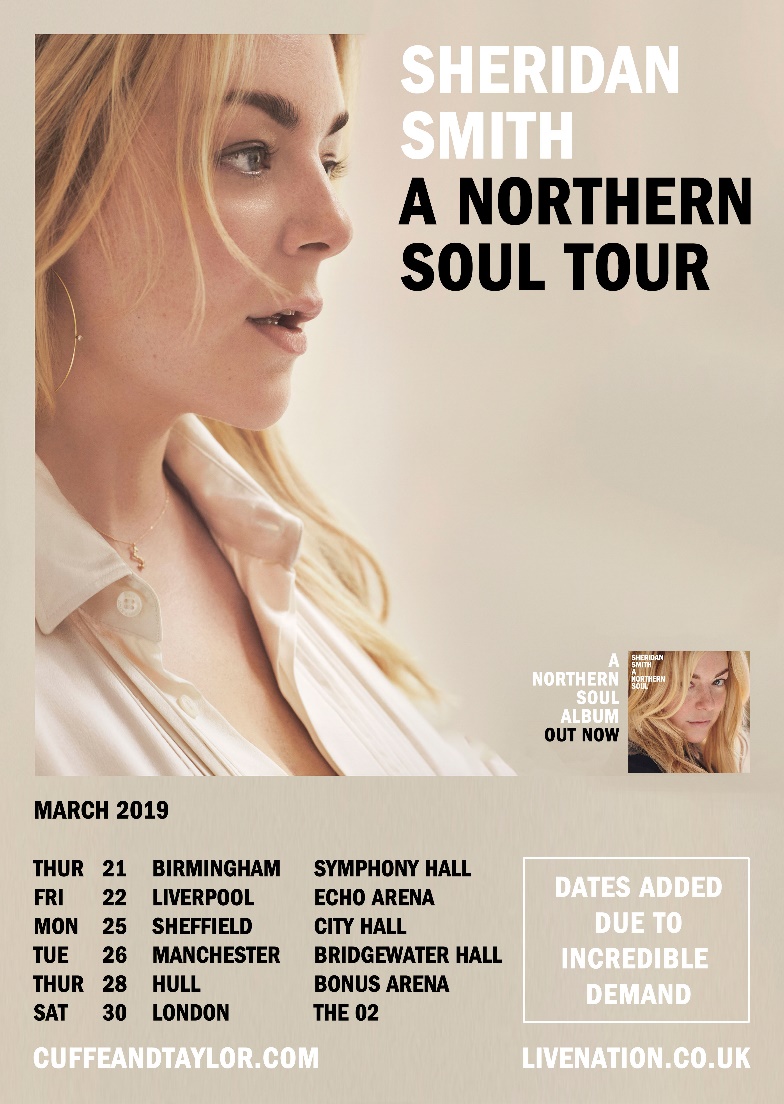 National treasure Sheridan Smith is heading out on tour in 2019 in celebration of her new album A Northern Soul.

Sheridan will headline five shows across the UK in March en route to her special ONE NIGHT at London’s O2 and the tour includes two North West dates at Liverpool’s Echo Arena on Friday March 22 and Manchester’s Bridgewater Hall on Tuesday March 26.

The tour follows Sheridan’s sell-out debut tour earlier this year which included a prestigious and celebratory show at the Royal Albert Hall and will see Sheridan performing tracks from her much adored discography, as well as new music from her second critically-acclaimed album A Northern Soul which was released earlier this month.

Speaking about the 2019 tour Sheridan said: “I can’t wait to get back out on the road. I’m thrilled to be playing at The O2, but I wanted to head North and see the fans!

“It’s really exciting to be given the opportunity to perform my new tracks along with the classics that people expect. I hope everyone enjoys the shows and I can’t wait to see you all there.”

Sheridan is one of the UK’s best loved actresses known for her TV roles in comedy and serious drama including The Royle Family, Two Pints of Lager and a Packet of Crisps, Love Soup, Gavin & Stacey, Grownups, Benidorm, Cilla, The C Word and The Moorside.

She won a BAFTA for playing Ronnie Biggs’ wife in Mrs Biggs and in 2015 Sheridan was also awarded an OBE for services to drama. The acclaimed actress has also enjoyed huge success in the West End collecting two Olivier Awards.

Eager to challenge herself as an artist, Sheridan delved into her own personal experiences to co-write a heartfelt and deeply personal collection of contemporary songs for A Northern Soul. She collaborated with some of the world’s leading songwriters including the album’s Grammy-winning producer Jimmy Hogarth (Amy Winehouse, James Bay), plus Amy Wadge (Ed Sheeran, Kylie) and Eg White (Adele, Florence + The Machine).

“I’ve loved getting back into the music,” added Sheridan. “It feels great to be able to sing a song while telling a story in three minutes.  I’ve been working with some amazing people who can get inside my head and help me write these great songs about my life.”

Tickets to A Northern Soul tour are on sale now from www.livenation.co.uk