“We originated in a little office downstairs, but we plan on taking it all over the world.”

Ambitious words from a Manchester-based company that sees the technological potential their city holds.

As a part of the revolutionary ‘CityVerve’ project, tech company, Sparta Digital, are bringing a wave of innovation to Manchester, starting with their mobile app, ‘buzzin’, which has made an appearance at this year’s Christmas Markets.

In its most practical form, the app uses augmented reality technology to help patrons find their way around stalls and points of interest like toilets or nearby transport.

“If you’re someone who has gotten the train to Manchester and you don’t know what it looks like, you’re going to want to find key locations, so it helps you quickly locate points of interest around the event”, he said.

Once you’re acquainted with any one of the market’s locations, however, that’s when the real fun can begin.

Making regular appearances at the markets for years, Manchester’s festive mugs are a Christmas Market tradition, but this year, not only will you see a new design on your Xmas cups; a scan from the buzzin app will conjure a singing elf onto your phone screen from your mug to join you on your travels around the city. 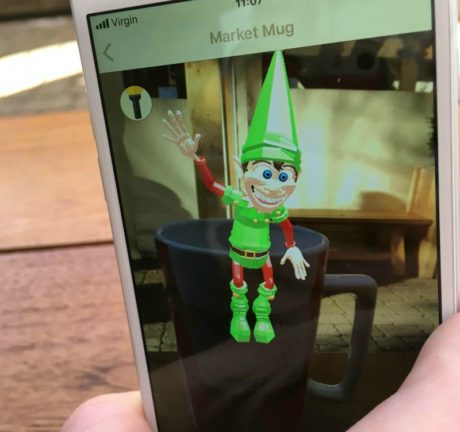 For the Snapchat generation, something more familiar is also in store. ‘Elf Chase’ is a Pokémon GO-esque game located in the Cathedral Gardens that pits them against five elves hiding within the stalls.

“Using a map and the camera on your phone, you swipe snowballs at the elves once they appear and once you’ve hit all five, you can claim a reward”, said Mr Heywood. 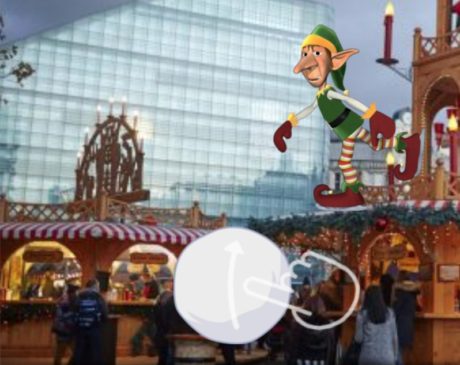 Elf Chase will be available from 10 December

For many visiting the markets this year, the buzzin app will be a welcome addition to an already festive occasion here in Manchester, but this isn’t the first time Sparta has made a virtual appearance in the city.

“We worked with Manchester Chinese New Year in January 2017. For them we did an AR game called Zodiac Hunt, which was like a Pokémon GO style game, but instead of finding Pokémon, you find Zodiac animals hidden around the city centre”, explained Mr Heywood.

We’ve also worked with Manchester Pride where we did AR navigation, so it told people through their phone cameras where each stage was – toilets, bars, etc.”

Despite being a new app, it has garnered thousands of downloads across these events since the start of this year.

The cutting-edge features that buzzin brings adds an extra layer of immersion to Manchester’s families and children, but it begs the question what can be done for the older generation of Mancunians.

Mr Heywood said: “We’re not only working at events, we’re working in the city. For example, we’ve worked on something called the Manchester Plinth, which is basically virtual art work.

“We’ve demonstrated it to some old people and it has really blown their minds. It’s like something out of a sci-fi film, and they’ve not really seen anything like it before. The app is for everyone, not just the tech savvy. We’ve engaged with members of the public to meet all their needs, feedback has been really good so far.”

Sparta, and their buzzin app, are part of a bigger project set to revolutionise modern city living.

Known as the CityVerve project, companies across Manchester including Cisco, TFGM, and indeed, Sparta Digital, are working to modernise and digitalise daily life, including transport, health, and energy.

To learn more about the CityVerve project, click here.

To find out more about the buzzin app, click here. It’s available on both IOS and Android.