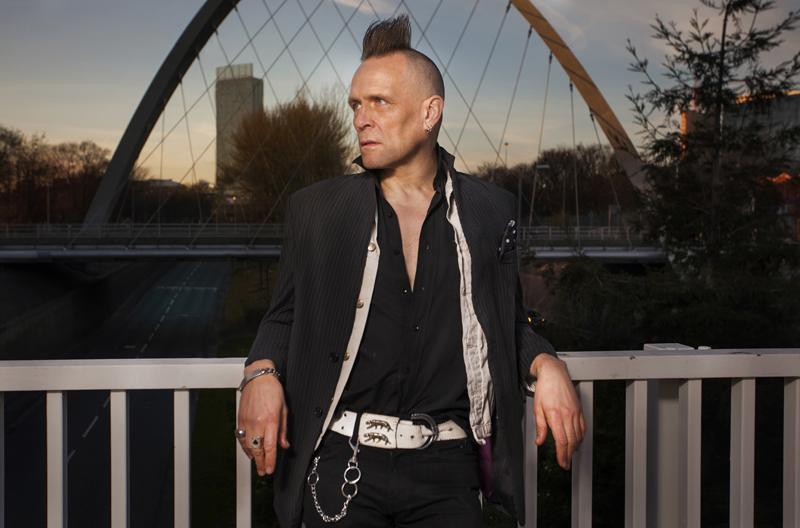 I first photographed John Robb in 1998. On a cold evening in April, seventeen years later, we recreated that shoot. In Manchester John is known as a singer and songwriter – as part of the bands Goldblade and Membranes – television presenter, journalist and author among other things. John describes himself as none! (I describe him as, ‘the cool-looking punk bloke on the bike’ and everyone knows who he is!)

Although John is thought of as a Mancunian, he is actually a seasider from Blackpool with a Scottish Mother; his late Father was from London’s East End and John still has his roots firmly in Blackpool. He loves Manchester and its people but does not intend to hijack their heritage! He talks about Blackpool as a ‘schizo town’ – half of it a holiday resort and the other half endless suburbs. The town felt cut off but was big enough to have its own world – with a great punk scene, including his band the Membranes! As a young child growing up in Blackpool, he was interested in reading, science and bird watching but life changed at high school! “It was cold, dark and depressing – a monochromatic, overcrowded rat run that only got fun in the sixth form when punk rock came along and I grew three inches taller over the summer! Glam started it, punk took it over the trenches. Create your own culture was crucial and make your own rules. It mirrored what we already felt. It was sex, drugs and rock n roll all at once!”

As John grew older Blackpool felt smaller and suffocating so in 1984 he moved to Manchester. He believes Manchester is a great city with no leaders, the people are what count and there are no figureheads. When asked which Manchester personalities he finds most interesting, his reply was, “The most interesting Mancunian is the next one I meet.”

At the moment John is writing two books, one about the dark side of the post punk era and the other is a collected work of journalism from the first interview of Nirvana to Stone Roses, etc. He is also busy getting ready to release the first Membranes’ album for twenty-five years and it’s already getting great reviews all over the world. His biggest achievement in life is that he survived the rock n roll rat run and, regarding his dream for the future, he is living the dream! My last question.. What’s your answer to eternal youth? Sex, drugs and rock n roll – two out of three and being a vegan!

DOWNLOAD IN FULL IN OUR NEW EDITION OF THE MAGAZINE: