The average diet is 25 per cent green, 14 per cent red – and nine per cent beige!

A study has revealed that despite a belief many people are often tucking into starchy carbs like pasta, potatoes and bread, plates are also filled with leafy greens including kale, peas and broccoli, and rich reds like tomatoes and peppers.

Other colours now commonly populating the nation’s plates include yellow items such as sweetcorn, orange foods like carrots and even purple with the likes of aubergine.

But 44 per cent admit there are colours they still avoid. One in five are wary about purple foods, while one in 20 aren’t sure about eating anything coloured orange.

A spokesman for Birds Eye, which commissioned the study, said: “It’s been widely understood for decades that a healthy diet is one with a good balance, with many trying to follow the five-a-day rule when it comes to fruit and veg.

“A great way of ensuring you get all the nutrients you need is to fill your plate with as much veg as possible, and eat in full colour.

“While dark green veg is healthy, eating nothing but broccoli or peas wouldn’t give you all the nutrition you need – so it’s great to mix it up with bright yellow sweetcorn, orange carrots, golden chicken and juicy red tomatoes.

“Whether it’s fresh or frozen, eating vegetables of all colours mean you are then consuming a wide range of nutrients and vitamins.”

A video shows how people are drawn to brighter colours of food.

Plates containing purple, beige and white, red and orange, green, and yellow foods were laid out on a table and six participants were asked to select the dish they thought looked the most attractive to eat.

All chose the red and orange plate of food as their favourite, along with the other vibrant colours of purple and green.

The study also found six in 10 adults now make a conscious effort to have a diet filled with varied colours, although women make more of an effort than men (68 per cent compared to 52 per cent).

Just under half believe they eat ‘just the right amount’ of green foods, although three in 10 think they could do with more.

Around 45 per cent have even made a conscious effort to eat more food of a certain colour, with green among the most popular.

Colour isn’t the only thing that puts Brits off a food though, with 58 per cent skipping something on their plate because of the smell.

Another four in 10 have passed over eating something because they weren’t convinced by its texture.

But women are more likely to turn their nose up at a food because of its smell, texture or how it looks than men are.

It also emerged that on an average day, Brits eat five different colours of food in total, although a fifth have seven or more.

More than 15 per cent even suggest eating a certain colour food can boost their mood.

Half say a plate with lots of bright colours is more appetising, while a picky 23 per cent only like it if there is an even number of colours on their plate.

But the research found a staggering 80 per cent associate the colour green with healthy food.

And men are more likely to consider beige, black, white or brown food as being healthy than women.

A spokesman for Birds Eye added: “Having a healthy, balanced diet means eating a variety of foods to ensure getting all the necessary nutrients.

“Making a meal healthier is as easy as adding more colours to your plate.

“Frozen vegetables are a great way to have nutritious vegetables readily available all year round to eat in full colour.” 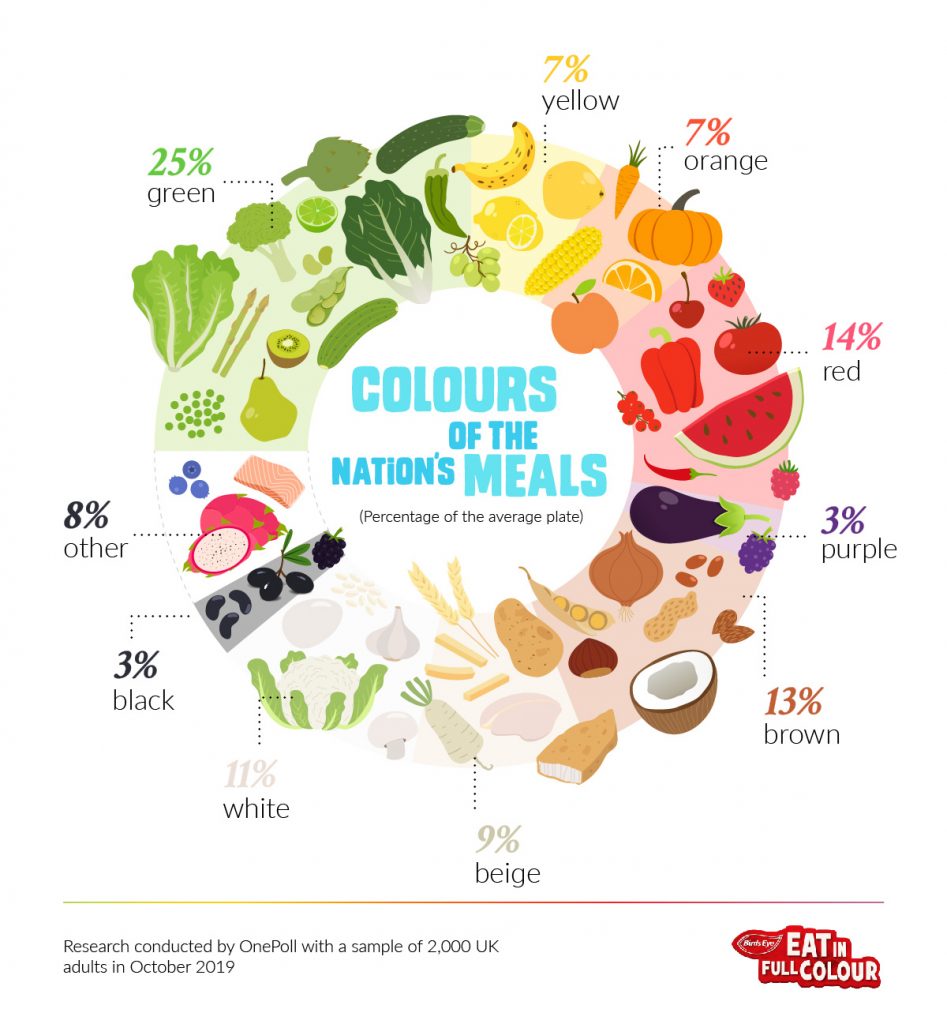