The Darkness return to Manchester 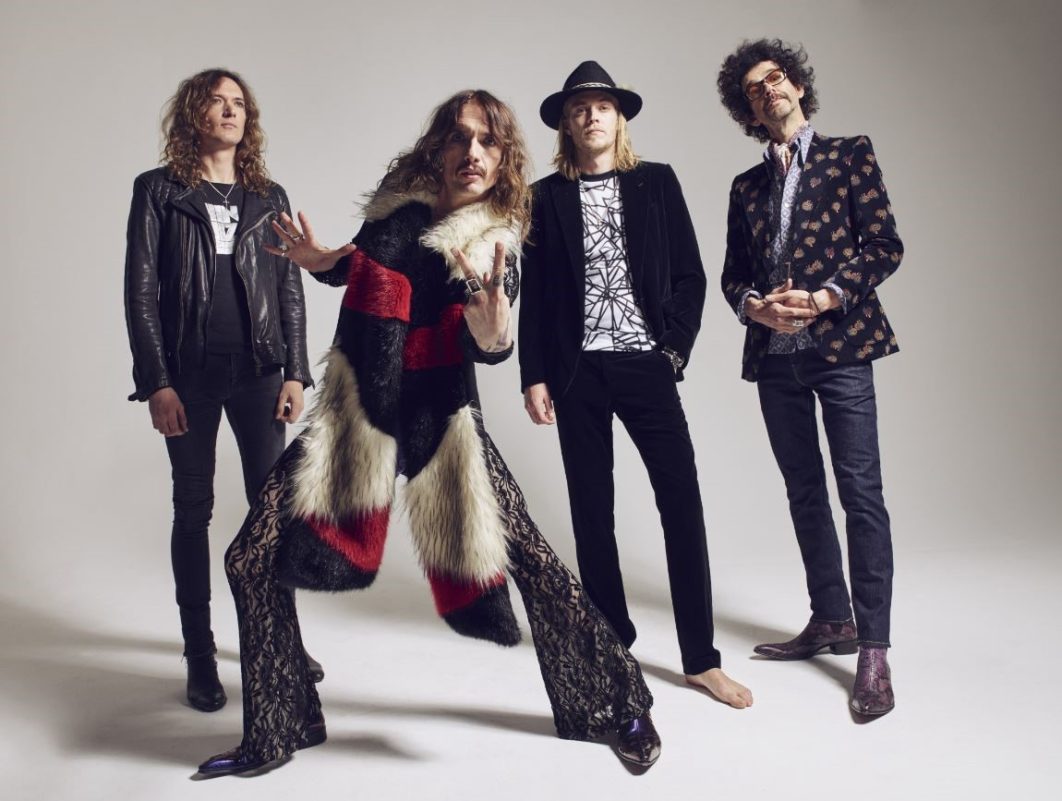 Rock icons The Darkness, best known for their hits ‘Christmas Time’ and ‘I Believe in a Thing Called Love’, are back in town!

This weekend they return to Manchester with their epic guitar riff filled tour Motorheart to showcase the band’s live potency as part of their extensive 22-date shows happening across the UK throughout December.

A true spectacle to behold, the English four-piece – brothers Justin and Dan Hawkins, Frankie Poullain and Rufus Tiger Taylor – will play brand new songs from their new album at the Manchester Academy on Friday 3rd December. Fans will also be treated to live performances as well as hits from across their award-winning, platinum selling back catalogue.

Their new album Motorheart is the perfect soundtrack for good times and is a collection of songs that soar as much as they rock, full of monster riffs and massive singalong choruses.

The Darkness have created a fun album that’s a record of immeasurable rock and roll extravagance. 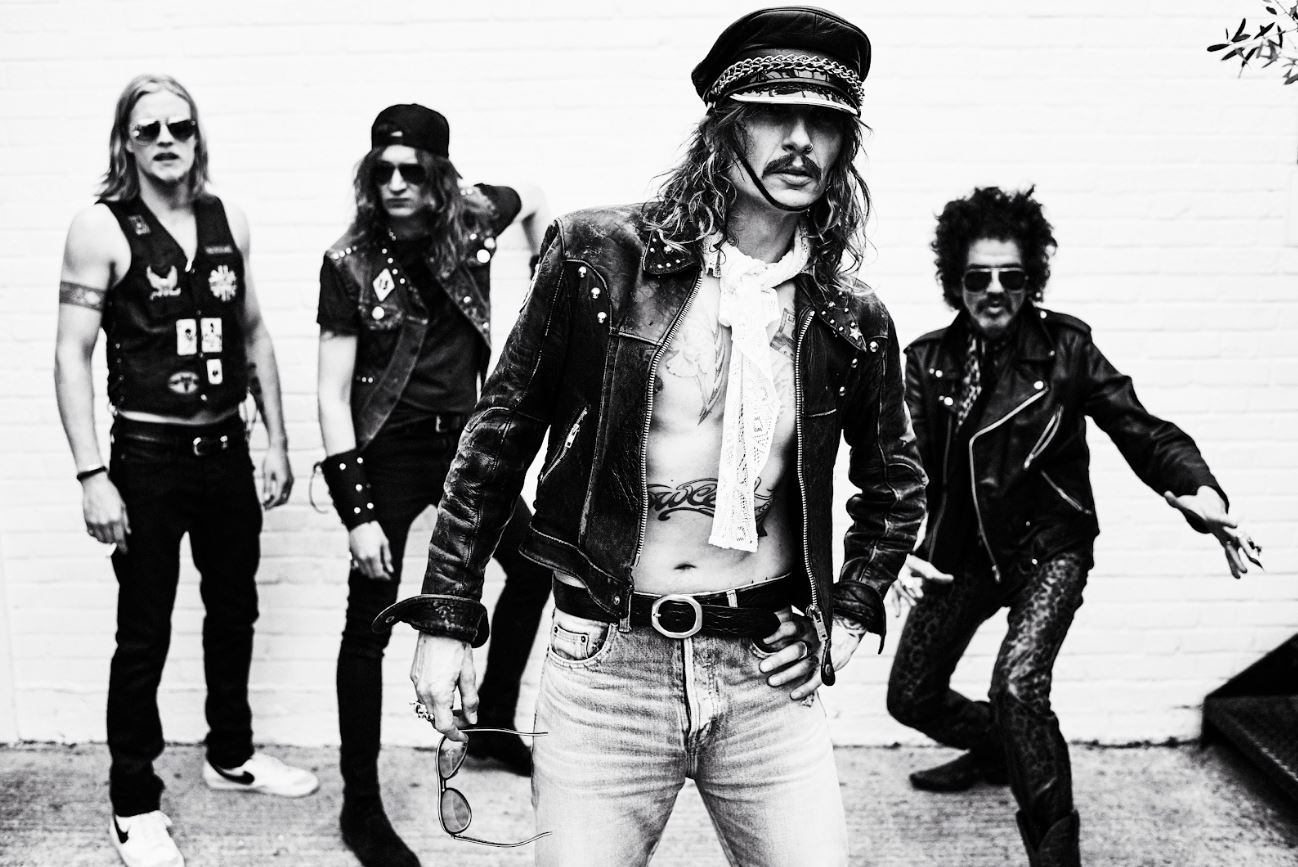 A lot of artists of late have been releasing very lockdown-inspired albums, you weren’t immune from what had been going on, but that kind of thing just wasn’t right for The Darkness as you saw it, was it?

“I had a lot of time to think about what I wanted to do with the words and the whole atmosphere of the tracks.

“All of the stuff we have done is really feel-good and although I’ve written sad stuff in the past, none of that felt appropriate this time around.

“It’s not that The Darkness didn’t experience Covid, we all did, but we didn’t feel like it was necessary to make a lockdown album, or one that reflected the despair, uncertainty and suffering that has been so all-pervasive these last 18 months or so. It’s not our job to do that.

“The important thing for us is to make rock music that makes everyone smile. That’s all we have ever wanted to do. Now it feels like our moment and neither our fans or ourselves want to hear us moaning. We just want to rock.

Motorheart is The Darkness’ 7th album, how conscious are you of not repeating yourselves while still not losing sight of who the band are?

“We don’t think about that any more in all honesty. We did for an album or two after Permission To Land, as it was so successful it became a bit like a blueprint album, so we were always looking for a song that correlated with Friday Night, say, songs that were a bit different but in the same way that they were different on that first record.

“We stopped doing that though, especially on the last two albums. We just write 100% from the heart and don’t worry about what we’ve done in the past.

“That’s a good place to be I think and also, no two songs are exactly the same anyway and if you do rip yourself off without realising it, it’s going to be more to do with the aesthetics and the playing than anything else.

The Darkness’ last album, 2019’s Easter Is Cancelled had a real social commentary side to it, but you’ve steered away from that this time to deliver a more goodtime rock n’roll record, but there’s still some subtle observations on tracks like Motorheart, which is both dark and funny but also feels like commentary by stealth?

“Yeah, we didn’t want to follow Easter Is Cancelled with an album called ‘We Told You So!’ as nobody likes those kinds of people, eh?  On Motorheart, I’m singing from the perspective of someone you can best describe as a total idiot.

“There’s some really subtle misogyny in there and a lot of outdated sexual attitudes. Those things are lying under the surface of what he’s saying, as he’s pretty much in denial about his faults and blaming everyone else but himself.

“The title track sees him having no luck in his relationships, so buys himself a robot companion, only for the same problems he has had in all his other relationships start to manifest themselves with the robot, but he still doesn’t realise that it’s him at fault.

“It’s saying that if you can’t learn from your mistakes and look at yourself, you can’t really expect the world to treat you any differently than what it does.

“Change is growth, so hopefully this can help some people at least recognise that those attitudes are only held onto by idiots.”

You’ve spent most of your adult life on the road and playing shows to fans every night. How much of a shock was it to have that stopped overnight last year and what did you do to deal with it?

“It was a huge lurch to begin with, but I pivoted a little bit into doing more online stuff, like on Patreon. I’ve built up a nice community of fans and patrons that I provide content for, which has really changed my whole relationship with the audience.

“I used to come onstage, rock people’s faces off and that was it, but now I know them all by name and know things about their lives. It’s the kind of interaction that I always tried to avoid before as I was too worried about mystique, but when something like this happens, we’re all in it together.

“Mystique doesn’t matter anymore, as we can’t do shows and disappear, but you still have to connect with your fans. It’s changed my approach to being a musician and an artist, as well as improving that connection, as we all have a common threat that we have all had to deal with.

“It doesn’t matter if you are a rock star or not, we have all been experiencing similar things, so it in a funny way, actually gave us all an opportunity to connect in ways that we might never have done otherwise.

“I’m really glad that I did it and even now that I’m going to be back on tour again, there’s no reason to stop doing it. I love those guys and they really helped me out at a difficult time. When things go wrong like that you just need to adapt to find other ways of doing things and surviving.

“Obviously, there’ve been so many terrible things that have happened in the last 18 months or so and a lot of suffering, but if there’s one positive I can take from it, it is that it made me look at life in a different way and I’m really grateful for that.”

You must still be really restless to get back out on stage doing what you do best, though?

“We did a streaming show and a couple of festivals in the summer. The first one was a bit edgy, but by the second one it just felt that everything was back to normal.

“Once the ball is rolling, it’s just a matter of keeping up with it. Once we’re on the actual tour we’ll be laughing though, I think.

“It’ll hopefully feel like business as usual. I really can’t wait to get going, I really can’t. I’ve already packed my suitcase and I don’t even leave for a few days! I keep looking at the clock, like ‘how many more sleeps until I can go on tour?’ I’m hoping we can get into the groove quickly and bring some euphoria the way we usually do.

“It doesn’t matter who’s in the room, you rock it as hard as you can.”

What are your plans for the future of the band after this album and tour is done and dusted?

“I feel a bit more motivated to do another album quite quickly, in all honesty. We’re looking at being able to do 8, 9 or 10 albums now, just the idea of that is crazy.

“When you’re young, you just think being able to do an album is great, but if you get to your mid-forties and you’ve got seven already, aiming for ten is well within reach.

“That’s a career’s worth of music, so if I can do that as The Darkness, I’d be really proud of that. We’re not far off, so we want to keep going and get the next one done, while we’re still young!”

With the Motorheart tour well underway, fans are being treated to brand new songs from the album as well as hits from across their award-winning, platinum selling back catalogue.

Support comes from Massive Wagons and tickets for all shows are available now. Check out Motorheart on all major streaming platforms.