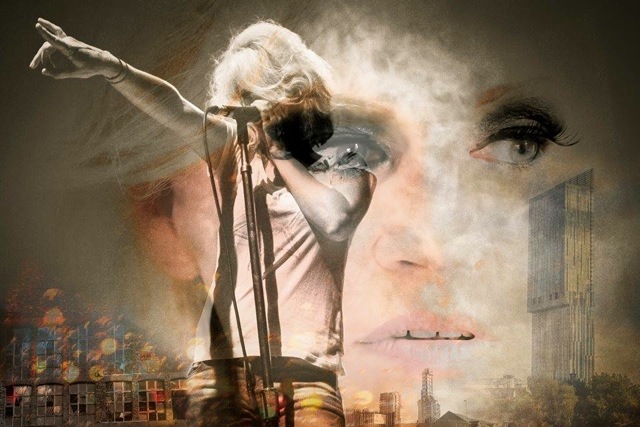 On Friday 22nd May musician, actor, writer, Stella Grundy will be performing her multimedia music production, The Rise & Fall of a Northern Star at Salford Arts Theatre. This unique and incendiary show, directed by Ian Bloomfield, blends comedy and tragedy in rhythmic, pacey dialogue, interspersed with Stella’s original music.

The story is a cautionary tale of rock n roll wannabe, Tracy Star trying to make her mark in the male-dominated Manchester music scene of the eighties and early nineties. Incorporating specific theatres and music venues, which suit The Rise & Fall of a Northern Star’s cross-over production style, Stella has developed the show from its infancy in unusual and intimate settings into a new, dynamic production designed for the stage.

The original script from The Rise and Fall of a Northern Star was built around nine songs that Stella composed specifically for the piece and these tracks are now part of a concept album which complements the touring show. Recorded at Gadget’s Lab Studios, Manchester, it was produced by Stella herself along with Jonathan Hurst and features legendary bassist, Jah Wobble. The album is currently available on request and there will be an official album launch taking place towards the end of the tour.

As part of the multimedia touring production of The Rise and Fall of a Northern Star, Stella has created a mockumentary, Then and Now, which is shown on the screen as an integral part of the play. Then and Now features various ‘talking heads’, including Clint Boon, Dave Haslam, John Robb and Mike Joyce, who form part of Tracy Star’s narrative by providing humorous anecdotes about Tracy’s historical moments from her musical past. This works brilliantly as part of the audience’s experience and enables them to form an emotional connection with Tracy as a fully-rounded and believable character from the Madchester era.

The Rise & Fall Of A Northern Star