During the working week, the first alarm goes off at 6:40am, but only one five people get out of bed at this point.

Of those polled, three in 10 said checking social media is the first thing they do as soon as they wake up, while a tenth make catching up on work emails a priority.

The research, commissioned by Quaker Oats, also revealed almost half the nation ‘snooze’ their alarm with one sixth doing so more than twice.

But these additional minutes in bed means less than half make time for breakfast everyday and a third of ‘snoozers’ admitted they’d rather have a few extra winks than food.

It also emerged 54 per cent agree the amount of sleep they have affects their productivity during the day.

Quaker Oats has teamed up with Tom Daley to help get mornings back on track and launch the Daley Kickstart to inspire the nation to wake up on the ‘right side of the bed’.

He said: “I’m no stranger to early mornings – my training schedule not to mention being a new dad keep me pretty busy – but I always make time for breakfast.

“With snoozers twice as likely to struggle concentrating, how you wake up and what you eat in the morning really does set you up for the day.”

Professor John Groeger from Nottingham Trent University’s sleep centre added: “Snoozing and our modern morning routine is having a detrimental effect on our body clocks and the day ahead.

“Pushing the snooze button isn’t a solution and the few minutes you save by having breakfast will cost you much more later in the day.

“It’s better to get up, eat a slow energy-release breakfast and get outside into the daylight as soon as you can.”

The study also found ‘manic Mondays’ still rings true as almost a quarter of the nation said they find it the hardest day to wake up.

Many differences were revealed between those who get up at the first alarm and ‘snoozers’, with the latter taking five extra minutes to get ready on a morning.

A further 44 per cent of those who stay in bed as long as possible admitted they feel ‘tired’ during the working day compared to one third those who jump straight up.

And one in five struggle to concentrate in work – double the amount of those who do not snooze their alarm.

A third of adults who get up at the first alarm feel productive during the day compared to just a quarter of those who opt for more sleep. 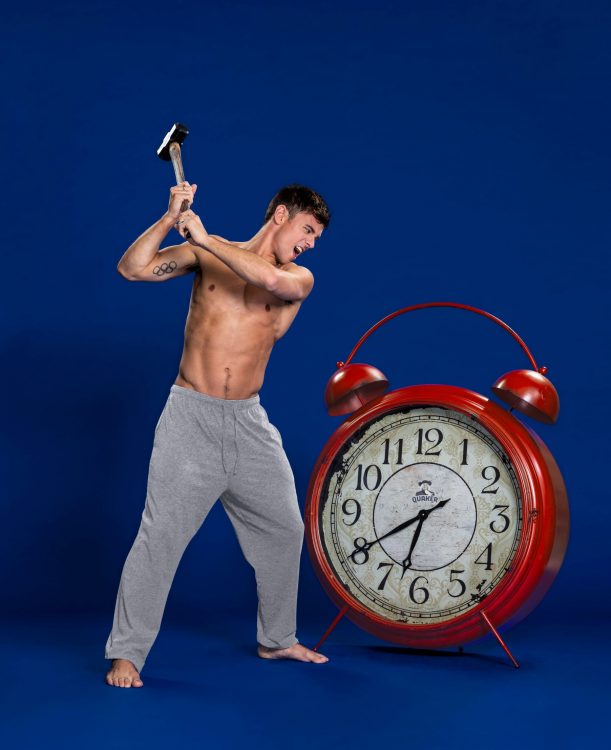 Those who don’t snooze their alarm also feel happier, converse with their colleagues regularly and work to the best of their ability more than Brits who stay in bed.

It also emerged one in five adults take more than an hour to get ready before heading to work, with 20 per cent claiming that eating breakfast takes up the most time.

A further one in five of those polled said they feel more motivated from eating breakfast.

Those who make time for breakfast tend to have their first snack at 11:25am while Brits who don’t eat when they wake up are ravenous by 10am.

Excuses for not making time for food first thing include a lack of time and not being hungry with one in five admitting they would rather have more time in bed.