Adverts without a ‘skip’ button, someone nabbing the social media username you wanted and tangled earphones are among the biggest inconveniences of modern life.

Calls from unknown numbers, running out of phone battery or data and a cracked screen were also among some of the woes causing daily anguish.

The study, exploring the top 40 things which get on the nerves of the nation, found public transport continues to be a bugbear for many, while issues with mobile phones are also a frequent frustration.

Not having enough leg room on a journey, websites with contact forms instead of email addresses and bars or shops which no longer accept cash payments also featured on the list.

The study was commissioned by O2 to launch their new unlimited data tariffs, with more than a third of respondents running out of data once every four months.

A spokesperson for O2 said: “Modern life is frustrating and it’s usually the small, seemingly insignificant things which, over time, all add up to an even bigger frustration.

“These small things tend to have a knock-on effect for the day ahead – another reason why they can be so annoying.

“A late train might make you late for a meeting or your phone running out of battery could mean you can’t reply to an important message.

“It’s why we want to make things just that little bit easier and give our customers the option of having unlimited data, so they have one less worry to think about.” 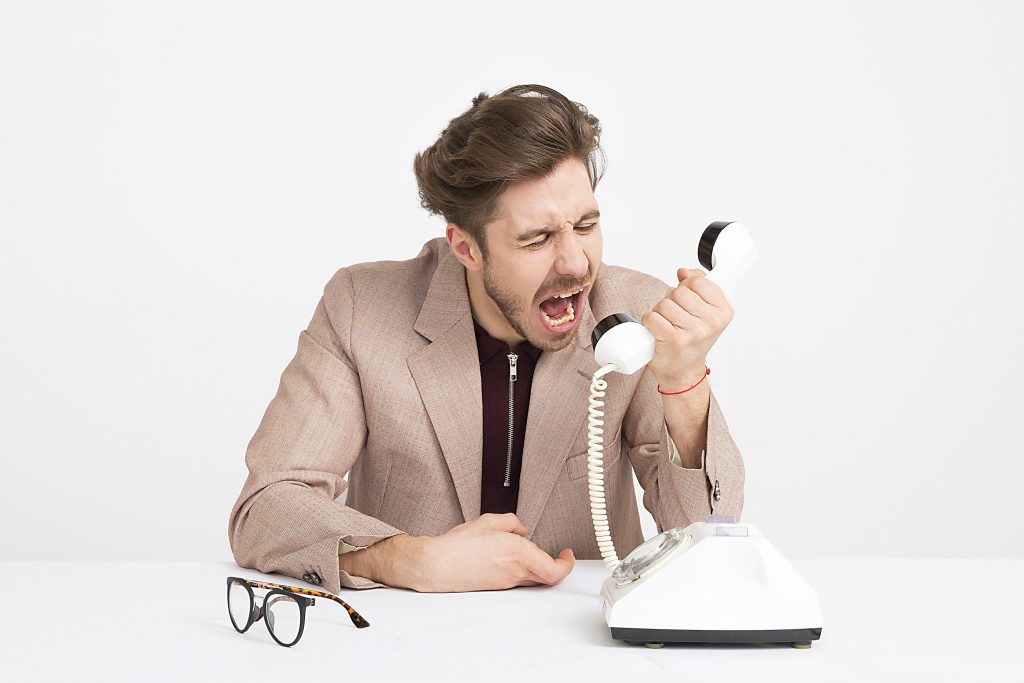 The study also found that during a typical day, adults will complain an average of three times, and almost half admitted to enjoying a whinge or moan over the inconveniences modern life throws at them.

More than a third reckon the British public has a regular whine because it’s easier to find problems than solutions, and nearly a quarter reckon complaints come from those who enjoy the attention.

But three in four think it’s a typically British trait to have a moan or a groan about things.

The study found partners are the ones typically on the receiving end of a complaint, followed by friends and work colleagues.

And nearly two thirds even get annoyed with themselves when complaining about modern nuisances.

Also featuring on the list of modern grievances was your mobile phone running out of storage space and apps which almost, but don’t quite, do what you need them to do.

It also emerged almost half of those polled would feel lost if they ran out of data, and four in 10 wished they had more each month.

Bingeing on YouTube videos, social media and using a mobile as a SatNav are among the biggest culprits for consuming those precious gigabytes.

1. Intermittent WiFi connection
2. Calls from unknown numbers
3. Forgetting passwords
4. Running out of phone battery
5. Late trains/buses
6. Paying extra for luggage on a flight
7. When your computer needs to ‘update’ seemingly every morning
8. Not being able to find the end of the sticky tape
9. Running out of mobile phone data
10. Not having enough leg room on a journey
11. Adverts with no ‘skip’ button on YouTube videos
12. Videos you’re watching via a streaming service (such as Netflix) on TV that are buffering
13. When you crack your mobile phone screen
14. Autocorrect on your phone
15. When your phone runs out of space
16. Bars or shops that no longer accept cash payments
17. Websites with no email address
18. Not being able to fast forward live TV
19. No space on the tube
20. Tangled earphones
21. Mobile phone updates
22. Your takeaway taking more than 30 minutes to arrive
23. Getting the wrong order with your supermarket online shop
24. ‘Average speed’ speed cameras
25. Someone already taking the username you want for a social media account
26. Apps that almost, but not quite, do what you need
27. People who call you, when you asked for a text or vice versa
28. When you straighten your hair and it rains
29. Answerphone messages
30. Having a dietary requirement like being gluten free or vegan
31. When the air conditioning takes too long to cool or heat your car
32. Not being able to pay-at-pump when you’re in a rush
33. Forgetting to charge your wireless headphones
34. Never knowing if you can trust your car reversing sensors
35. People who don’t pick up to withheld numbers
36. Living outside the delivery radius of the nearest Chinese restaurant
37.  Getting photo prints which don’t fit in the frame
38.  Switching from iOS to Android, or vice versa
39. When you cancel your Spotify Premium so you have to sit through adverts
40. Your story not uploading to Instagram or Facebook