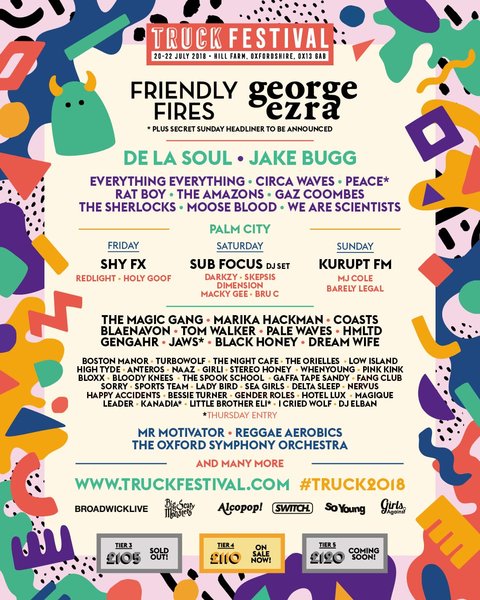 Truck Festival is back and it’s celebrating it’s 21st year in style, with headliners George Ezra and Friendly Fires.

This year, it is to take place from the 19th or July to the 22nd at Hill Farm in Steventon, Oxfordshire.

If you have not yet heard of Truck, the festival formed two decades ago in 1998 and is the UK’s longest running, best small festival.

As for the Sunday, The Courteeners and Editors will headline the stage – check out the website for the full line-up.

George commented on what his fans can expect from his set:

I’m so excited to be playing my first ever Truck Festival and over the moon that my debut gets to be as headliner. It’s been on my bucket list for a long time.”

On Thursday, opening as the festivals first Thursday headliner, indie rock quartet Peace will be kicking off the weekend of live music.

The line-up also includes a number of up and coming artists including The Sherlocks, Pale Waves and The Amazons – all of which are ones to watch this year as they pave their way into the music industry.

Want to join the fun?

Get your tickets here – tier one have already sold out, so be quick!

Watch 2017 Truck Festival’s after movie for a taste of whats to come:

The Sherlocks nail their biggest headliner to date!