United by numbers: 25 things that wouldn’t exist if not for the National Lottery

Idris Elba’s movie career, The Eden Project – and giant horse sculptures The Kelpies are among 25 things that may not exist were it not for the National Lottery.

Other national treasures to benefit from lottery grants include the movie Bend it Like Beckham and gold medal-winning Olympians Victoria Pendleton and Sir Chris Hoy.

The list has been brought together in a new piece of modern art by world-renowned artist David Mach.

He was commissioned to create a mural to celebrate the start of eight weeks of celebrations for The National Lottery’s 25th birthday.

The artwork features a mix of famous and lesser-known national treasures brought together in one image to represent The National Lottery’s impact on life in the UK over the last 25 years – across sports, film, heritage, the arts, and community projects.

It includes the Morecambe Brass Band, one of the first projects to ever receive National Lottery funding; and Idris Elba, who made his directorial debut in 2018 with Yardie thanks to help from the organisation.

David Mach said: “For the past 25 years, there is barely a part of our cultural, sporting and community life that has not been positively influenced by National Lottery funding.

“As someone who is involved in charities and institutions, and has artwork commissioned from National Lottery funding, I know the impact it has had on the UK.

“I wanted to help people to get a sense of this impact with this artwork through 25 stories and to have it shown on a local high street for anyone to view is fitting.”

The artwork, titled ‘United By Numbers: The National Lottery at 25’ was exhibited for the day in the window of Booth & Howarth on Mauldeth Road, Manchester, a shop that has been selling National Lottery tickets for 25 years. 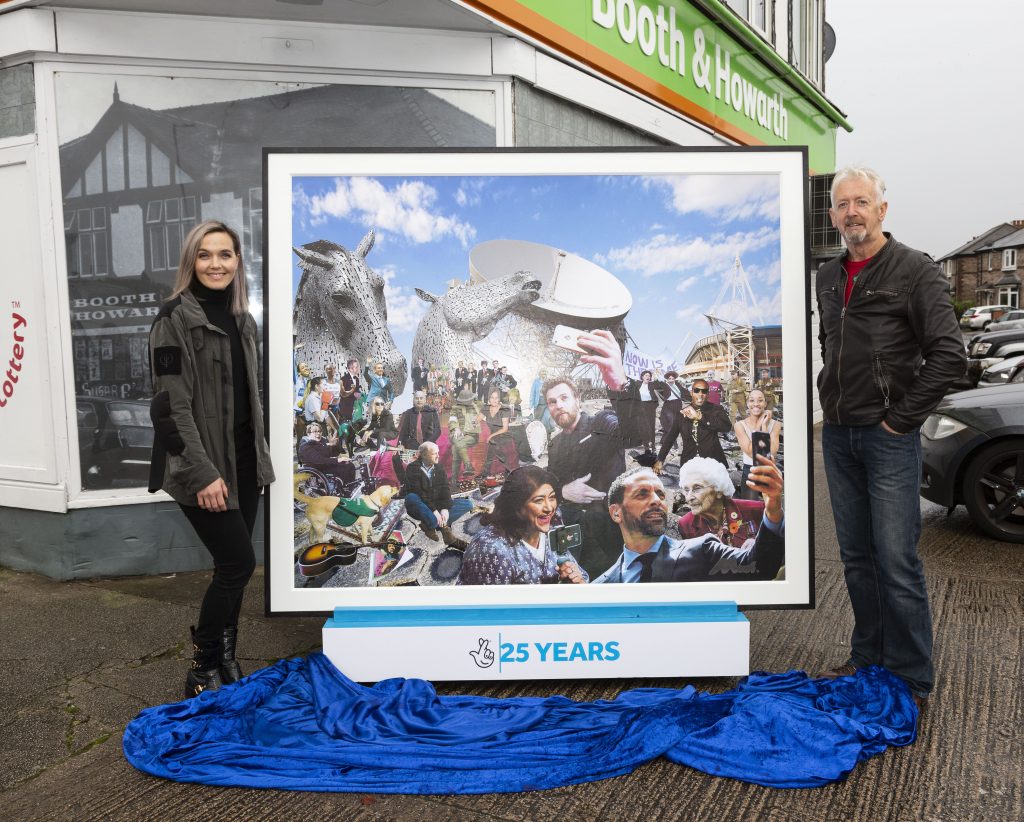 Olympian Victoria Pendleton and David Mach. The artwork was exhibited for the day in the window of Booth & Howarth on Mauldeth Road, Manchester, a shop that has been selling National Lottery tickets for 25 years.

It’s also available to view online at www.unitedbynumbers.co.uk.
2012 Olympic gold medallist Victoria Pendleton, who features in the artwork, added: “The National Lottery helps thousands of athletes across the country reach for their dreams and inspire the nation.
“It helped fund those amazing experiences in 2012 that we all remember and cherish; and I doubt I would have been able to win Olympic gold without it.
“It is an honour to be chosen by David for this amazing artwork to represent the impact playing The National Lottery has had on the Olympics.“I hope everyone enjoys the upcoming celebrations to mark the 25th birthday of what has become such an important institution.”
Discover the positive impact playing the National Lottery has had on your community over the past 25 years by visiting www.lotterygoodcauses.org.uk, or get involved by using the 25th hashtag: #NationalLottery25.The people, places and icons celebrated in David Mach’s ‘United by Numbers: The National Lottery at 25’ artwork:1. The KelpiesThe world’s largest equine sculptures in Falkirk’s Helix park were designed by Andy Scott. The Kelpies have received £25million of funding from The National Lottery.

Katarina Johnson-Thompson won the gold medal at the 2019 World Championships, breaking the British record. This ranks her sixth on the all-time heptathlon lists. Dina Asher Smith is the fastest British woman in recorded history. She is the 2019 World Champion at 200 metres, the 2016 and 2018 European champion at 200 metres and the 2018 European champion at 100 metres.

Courtney is from Monkstown Boxing Club in Northern Ireland whose #INYOURCORNER project helps improve the health, well-being and employability of young people in the area. The InYourCorner project has received almost £600,000 of funding through The National Lottery.

One of the UK’s greatest Paralympic athletes, Tanni Grey-Thompson, amassed a remarkable medal haul over 16 years. Over her career she won a total of 16 Paralympic medals, including 11 golds, held over 30 world records and won the London Marathon six times between 1992 and 2002.

The legendary rock guitarist’s flat at 23 Brook Street, London was permanently restored thanks to £1.2 million in funding from The National Lottery in 2014.

Gold medal winning Olympians whose careers culminated at London 2012; the games that would not have been possible without National Lottery funding.

One of the first-ever projects to receive National Lottery funding. The band was set up by Bernard Vause and is still going strong to this day. Morecambe Brass Band received £47,566 of funding through The National Lottery – they still play with the 24 brass instruments they bought with that funding.

After winning £7.6m on The National Lottery, Ray and Barbara Wragg are some of the most generous winners after giving away £5.5m, mostly to charities in Sheffield.

We’re Here Because We’re Here, by Jeremy Deller, was just one part of a large scale cultural programme marking the Centenary of the First World War. The National Lottery invested £15 million over five years for this programme overall.

Tracey Emin’s artwork has been exhibited at National Lottery funded galleries across the country, including at The Turner Contemporary Art Gallery in her hometown of Margate.

English film director whose film ‘Bend it Like Beckham’, starring Keira Knightley in her break out role, has become one of the UK’s best loved films and is just one example of the films funded with National Lottery funding through the BFI, awarded £945,000.

A volunteer for 15 years with the National Lottery funded charity Home-start. Edna has helped hundreds of families recover from post-natal depression. Home-Start have received over £1 million of funding through The National Lottery.

Actor who featured in Trainspotting 2, one of the first productions to benefit from Creative Scotland’s Production Growth Fund of £500,000 supported by The National Lottery.

The National Lottery has supported projects across the country exploring the history of the suffragette movement, including the 2015 film, Suffragette (£1m); The Face of Suffrage artwork and the East End suffragettes project.

Award-winning actor, writer and producer. With the help of £1m National Lottery funding he made his directorial debut in 2018 with ‘Yardie’.

Ahead of the 1999 Rugby World Cup, £46 million of National Lottery funding was secured to build Cardiff’s iconic stadium.

Founder of parkrun, the free weekly 5K runs open to all enjoyed by over 2 million people across the UK,  National Lottery funding has significantly supported parkrun to allow communities to benefit from free, weekly, social activity in open spaces. Parkrun have received over £3 million of funding through The National Lottery.