REVIEWED: Veganuary at All Bar One

Veganuary is upon us. And as we near the end of the month, it seems more tempting than ever to veer off the plant-based path. Well fear not. Whether you’ve taken on the Veganuary challenge, whether your veganism is an all year round kinda gig, or you’re just looking to eat a little greener and cleaner, the All Bar One Vegan menu may just be the answer to all your prayers.

As well as a bountiful three course menu, All Bar One includes a ‘Mindful Drinking’ section as part of their vegan range. With headings such as ‘delicious drinks without the calories’, ‘refreshing juice coolers’ and ‘low or no alcohol’ – the dining experience offers a full body detox (and in my case – well needed after an over-indulgent Christmas).

To start, I chose a raspberry, apple and rose cooler. Containing a mere 30 calories I have to admit, I was a little apprehensive the drink would be watered down and a little tasteless. I should have had more confidence. Bold, fruity and served with fresh raspberries the coolers delivered everything promised in the description. Refreshing.

We began our vegan feast with the ‘Chilli Non Carne Tacos’ (yes, the pun played a large part as to why these were chosen), and ‘Cauliflower Wings’. 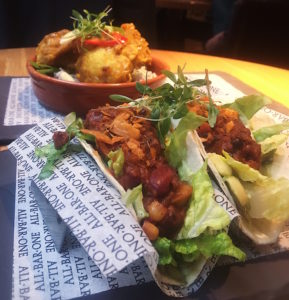 Two small tortilla tacos are presented in a stand and loaded up with crushed avocado, Chilli Non Carne and nacho crumb. As a usual meat eater (sorry) I can confidently say, the mince in this case was absolutely not needed, nor was it missed. The Chilli Non Carne spoke for itself, and confidently did so with rich and smoky tomato notes.

The Cauliflower Wings were tender and coated in a raita-style sauce – which when accompanied by the mango chutney created a zingy flavour sensation. The wings were served on a bed of chopped cucumber and onion, smothered in a Greek style yoghurt dressing.

Boasting just under ten delicious sounding vegan dishes it’s a pretty tough decision to chose a main course. But we got there. 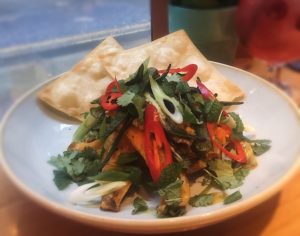 This dish was without a doubt the highlight of my dining experience. Every element of the dish brought a new and exciting flavour and contrasting texture.

What I also loved about this dish was that at no point do you think, ‘oh okay, so this is the vegan equivalent of… so and so’ or ‘ah, so they’ve replaced the meat component of the dish with… so and so’. This dish was created to celebrate its ingredients. And it succeeded. 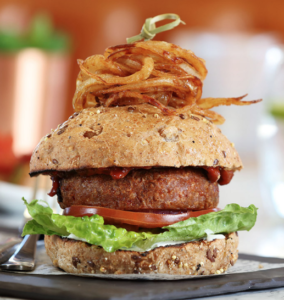 Also ordered, was ‘The Plant Based Burger.’ The revolutionary Beyond Meat® burger promises to look and taste like meat. Constructed of a plant-based patty, cheese alternative made from coconut oil, lettuce, tomato, vegan mayonnaise and served with seasoned fries.

Now, when I tell you that my 4-year vegetarian accomplice had tears in his eyes because he swore he thought was eating a Five Guys Cheese Burger, I’m not exaggerating. This really happened.

As a meat eater myself, I still remain pretty confident that if I blind taste tested both burgers I’d be able to tell which is which with no real struggle. But I’ve got to admit, it was pretty damn good. The thing that impressed me the most, was the vegan cheese. Melted, and smothering the patty more with every bite I honestly would never have known this wasn’t regular cheese.

To bring our vegan feast to a close, we ordered a the ‘Biscoff Banana’ and ‘Rich Chocolate 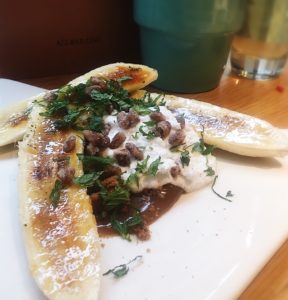 The chocolate pot was rich as promised, but not bitter as I feared it might be. It remained smooth, creamy and topped with fresh berries.

I may not be converted to Veganism all year round, but if all Vegan food tasted as good as this menu, I’d be extremely close.