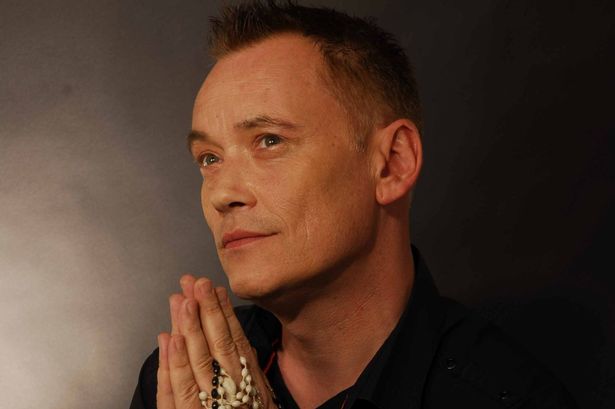 Terry Christian is a busy man. His radio show on Imagine FM is a big hit and he’s often asked to appear on Channel Five’s The Wright Stuff as a guest on the panel, as well as writing and touring with his Naked Confession Of A Recovering Catholic show around the country, Terry is known as – some would rather unfairly suggest – a classic ‘rent-a-gob’.

The Terry I meet with is charming and intelligent; the epitome of polite, he’s relaxed and humble.

I ask him about his new(ish) job as a freelance lecturer at Manchester Metropolitan University (Terry has been lecturing on the Manchester culture and music scene at Man Met since October 2013), and he says, without a hint of irony: “That reminds me actually, I must invoice them.”

“I still do my radio show and still write the odd article. In fact, I’m writing an article at the moment for the Daily Mirror; a top ten list of records that will get people out to vote in the election.”

Ah, the E word. Those of you that have been living on another planet for the last few months won’t know that a general election has been and gone, and, as this interview took place just before the shock 8 May Tory majority, Terry, who’s never been shy to voice his socialist views, still remained hopeful of a Labour win.

It’s said to be impolite to ask someone who they’re voting for so I use another tactic, “who do you think will get in?” I ask, “Well I’m hoping it’s Labour. I can’t even envisage why anyone would vote Conservative?”

Millionaires? I politely point out: “But even then, we still have to look after the most vulnerable people because if we don’t it just won’t be conductive for society in general.”

Politics is clearly an area Terry is passionate about:

“To me, you’ve got to vote. You know, I’m against the whole Russell Brand thing (Brand famously told the UK not to vote in a bid – he said – for the people to take back control of the country), and I made the mistake of tactically voting last time because Labour have got no chance of getting in round here (Bramhall, where Terry lives), so most people who want Labour in vote for the Lib Dems. But what I learned was that he [Bramhall Lib Dem MP, Mark Hunter] didn’t vote against anything; not the bedroom tax, nothing. So I won’t be making that mistake again.”

Catholicism has clearly had a big impact on Terry’s life. So much so that he’s made a comedy about it. His Naked Confessions of a Recovering Catholic show is a satirical look at what it’s like for kids who grow up in a Catholic family and have Catholic values instilled in them from a young age.

“From my point of view, it’s like, yeah, I’m a bit of a t**t, but it’s God’s fault, you know.” He continues, “Because it’s that whole Catholic thing about, you know, you almost feel bad about everything, so sometimes you actually feel bad about the fact that you don’t feel bad. So it gets to the point where you think ‘I might as well do it anyway ‘cause I’m gonna feel bad whatever happens.’”

The show also touches on the darker nostalgia with the wider aspects of Catholicism and how, perceived in the eyes of a child, it can a be daunting, intimidating and even frightening prospect with tales of nuns, priests, First Holy Communions and being forced to go to church: “I talk about, you know, your first confession, and the things that you get told and all the breast beating, you know; ‘through my faults, in my thoughts, in my words and in my deeds, in what I have done and what I have failed to do.’ You know, the fear of making your confession when you’re only six. So that’s the darker side of my show.”

From the Old Trafford area of Manchester, Terry believes that the black community in Manchester had a massive impact on the ‘Madchester’ music scene.

“In terms of the diversity of stuff you used to listen to,” He continues, “especially in my neighbourhood, you know, I only really noticed when I went to polytechnic college in London that people’s record collections were really genre specific. Whereas people in Manchester were much more diverse; we had reggae, soul, punk.”

Speaking of the ‘Madchester’ scene, what happened to it?

“It was just cut off to quickly.” He adds, “It was like the record industry tried to strangle it at birth. It could have continued for another five or 10 years because Brit Pop was just an extension of the Madchester scene Part 2, but they just wouldn’t let anymore Manchester bands through. They couldn’t stop Oasis because there was just too much momentum behind them. But they never let Intastella through, they never let Northside through, you know, they scorned them out of existence.”

Speaking of Intastella, their lead singer Stella Grundy has performed as a guest on Terry’s Naked Confessions of a Recovering Catholic show and Terry has a real fondness for her: “I got them to appear on The Word back in the day; they were a great band, you know, Stella’s such a talented artist and is touring with her own gig at the moment [The Rise and Fall of a Northern Star], she’s been to London with it.”

Reminiscing of the Manchester scene in the early 90s is obviously something that Terry does – or is at least asked to do – a lot, but is there anything about his career he’s change?

He famously pop public schoolboys in Room 101 on the Paul Merton show of the same name in 1995, a mistake, according to Terry: “Yeah, you see, I shouldn’t have done that. Not only was a stereotyping, but I was also judging a whole sort of class; something which I was accusing people of doing to the working classes.”

Was it not, I rather cheekily ask, because it was ex-public school boys that were making executive decisions in media at the time?

“Yeah, there is that too,” He laughs, “I just wish I’d have had much better PR advice and kept my mouth shut at times.”

I point out that – with a CV that includes BBC Radio Manchester, Celebrity Big Brother runner up, The Wright Stuff, The Word, and all of the other things he’s done in the media – he might be being a bit hard on himself.

“Oh, I’m not being hard on myself,” he corrects, “I’m being pragmatic. You know, if you look at other working class people that were in the media; Chris Evans never talks about being working class, you know, I think I had an individual problem about always wanting to fight other people’s battles.”