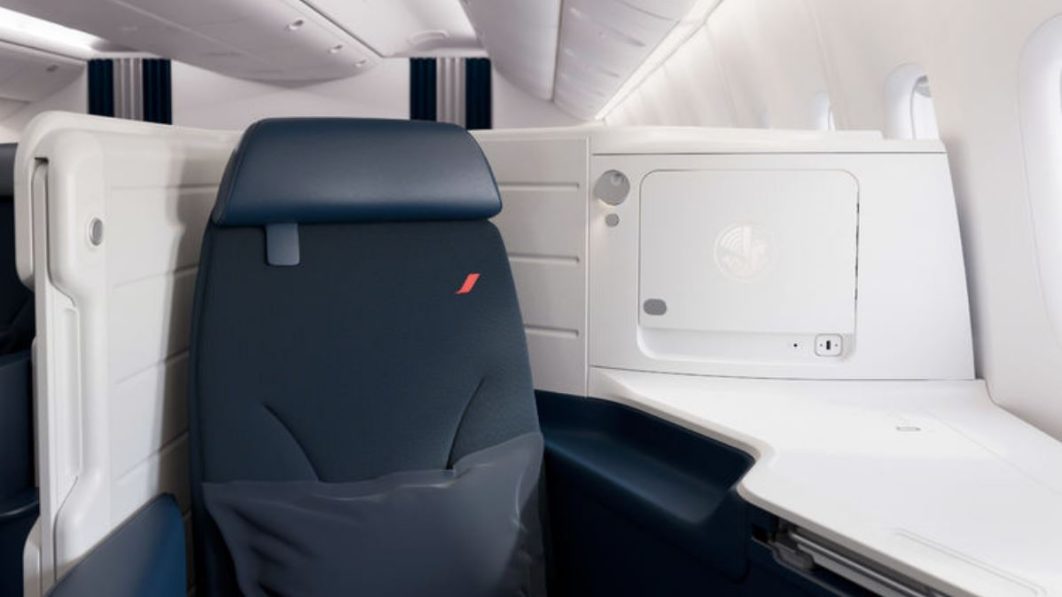 As it’s described, the airline’s seat has been designed based on the 3 “F”s – ‘Full Flat’, meaning that the seat transforms into a real bed almost two metres long, ‘Full Access’, providing all passengers direct access to the aisle, and ‘Full Privacy’, ensuring optimal privacy. 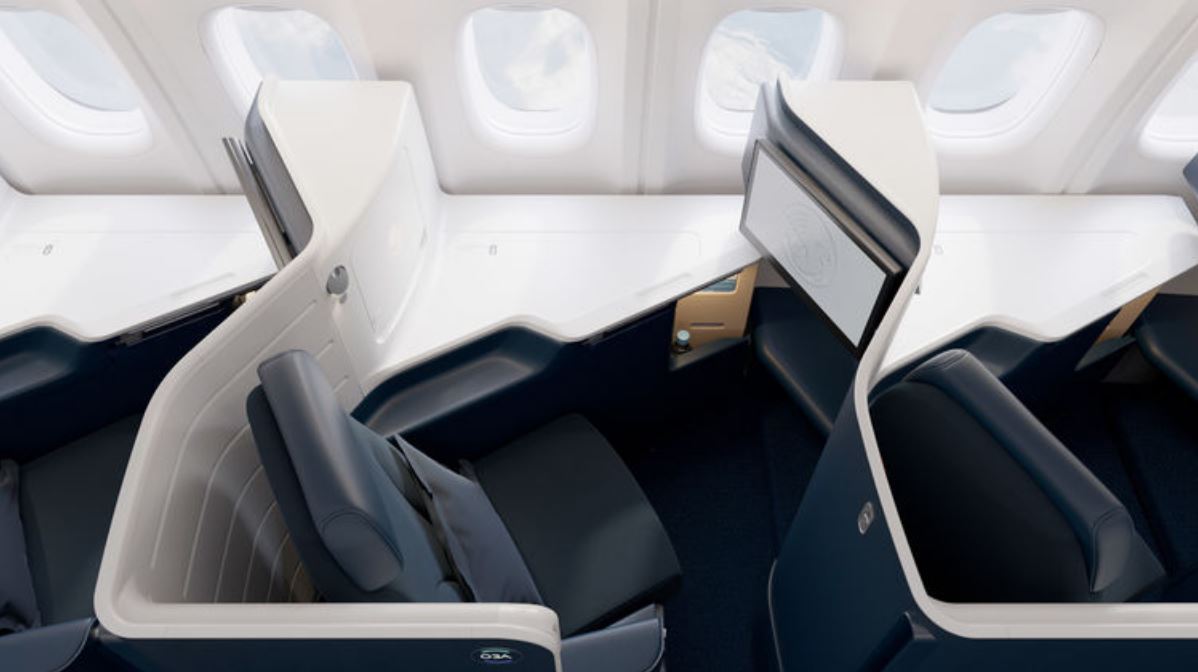 A new sliding door allows passengers to create a totally private space, out of sight from the other passengers in the cabin, which is more in line with its long-haul competitors’ business class products.

The seats located in the centre of the cabin are now equipped with a central panel that can be lowered for passengers travelling together.

The seat also features a wide 17.3-inch 4K High-Definition anti-glare screen with a noise-reducing headset, a new Bluetooth connection allowing passengers to use their own headphones and several electric sockets. 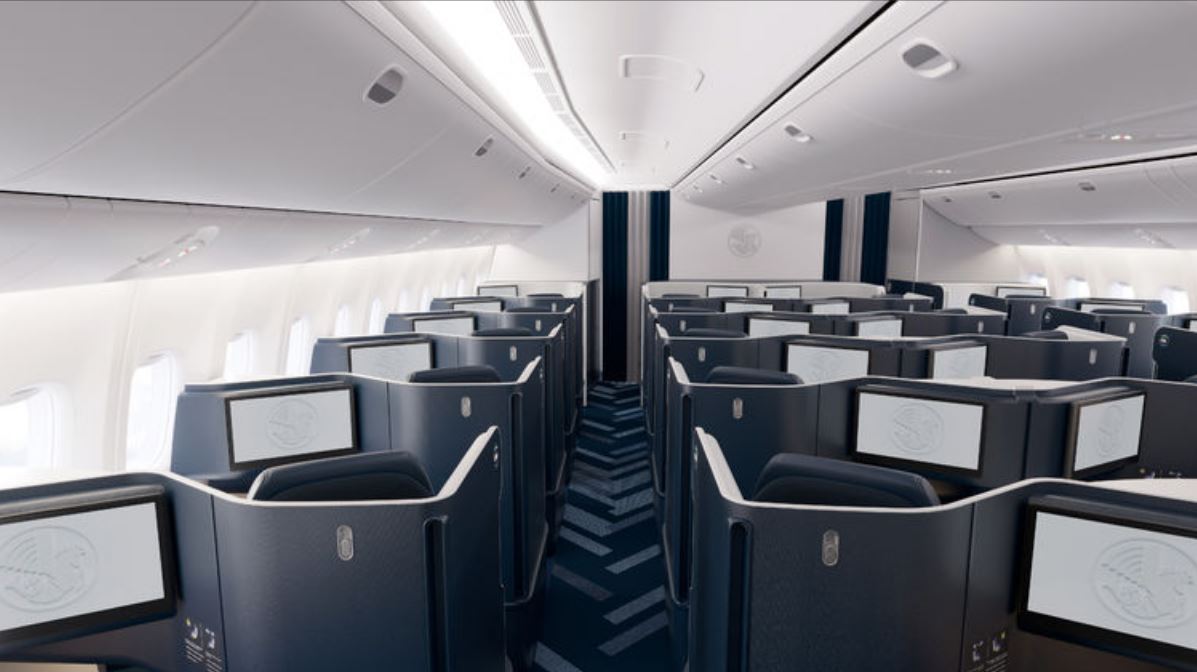 As passengers board future aircrafts, they are greeted by a backlit winged seahorse, embodying the company’s founding myth and rich history. The seat’s padding adds softness and a feeling of cosiness. Wool, brushed aluminium, full-grain French leather are the noble, soft and natural materials chosen by the airline for the manufacture of its seats. Each seat is also embroidered with the company’s trademark red accent.

This new standard for the airline is to be progressively rolled out on 12 Boeing 777-300s from September 2022, where each aircraft will be equipped with 48 seats in Business class.

First-Class La Première is also on the horizon 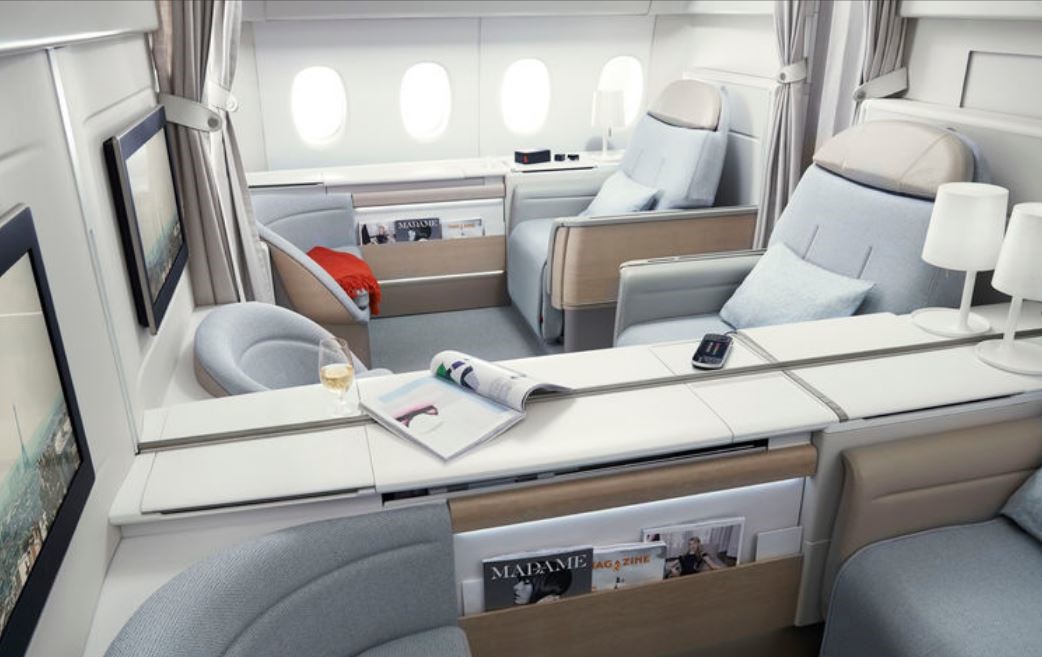 The aviation company is working on a new La Première cabin, the airline’s announcement for its commitment to ‘First Class’, offering passengers its most exclusive and elegant service, regularly rewarded for its quality and excellence.

Currently in its design phase, the new concept will be unveiled in 2023/2024 winter season. The future cabin will be the longest on the market and will offer up to three modular configurations that can be fully privatized for an even more exceptional journey: a seat, a sofa and a fully flat bed.

The new cabin will equip a larger number of aircrafts compared to what is currently on offer, which is a large-scale project a part of Air France’s strategy to move more upmarket in line with other major airlines with similar offerings.

According to statement from its press office, this ‘also covers fleet renewal, lounge renovation and the development of a more sustainable catering offer, signed by Michelin-starred chefs in the airline’s Business and La Première cabins.’

Benjamin Smith, CEO of Air France-KLM, explains: “La Première represents the highest level of French excellence and is an intrinsic part of Air France’s DNA. Even at the height of the Covid crisis, we could see the attractiveness of such an offer for our customers, particularly on the North Atlantic route, where load factors in the La Première cabin are currently higher than they were back in 2019. We look forward to unveiling this new cabin, which is set to meet the highest global standards.”