Simon Rimmer is best known for his on screen banter with co-presenter Tim Lovejoy and whipping up delicious, homely meals on Channel 4’s Sunday Brunch.

Since his partnership with domestic appliance manufacturer Hoover began last year, Simon has embraced their ethos, fronting numerous campaigns such as ‘Dinner with Rimmer’, ‘Cook the Way you Live’ and showcasing their portfolio of hobs, ovens, hoods and sous videos models in cooking masterclasses as their cooking ambassador.

VIVA caught up with the celebrity chef and restauranteur as he shares his culinary tips and what ingredients he suggests that we all put in our lockdown baskets to create feel good food.

You’re known for your recipes, cooking on our TV’s and your restaurants, but have you ever had any cooking fails?

You definitely might burn things, but I don’t think you make many huge mistakes. Sometimes what happens is, you might end up with a dish where the balance is wrong. Sometimes what happens is. I’ll make a dressing and the mustard may be too overpowering so it drowns the other flavours in the dish or there might not quite be enough herbs. You end up developing your own sort of mental pallet, so I know, without even tasting it, what flavours will go together. Then equally when I do taste things, I’ll know if I need to sprinkle some sugar in it, add a little bit of honey or I need to add a bit of spice in it. So whilst you might not get things right, especially on your first go, you don’t usually make something that is totally inedible unless there’s something technically wrong that you’ve done – it is rare that happens.

Where did that passion for good food and cooking originally come from?

I’ve always been surrounded by good food because my mum and dad both cook. When I was growing up in the 70’s, it was rare for the dads to cook, but mine had always really enjoyed cooking, because his side of the family was originally from Italy so they were fantastic cooks. And, still to this day. I can still taste my nan’s apple pie. It was one of the greatest things ever! Growing up, it was my mum’s day off on a Saturday when we had a chippy tea but apart from that, she would cook every day. So I think it’s no surprise that I’ve ended up doing this as a career really. 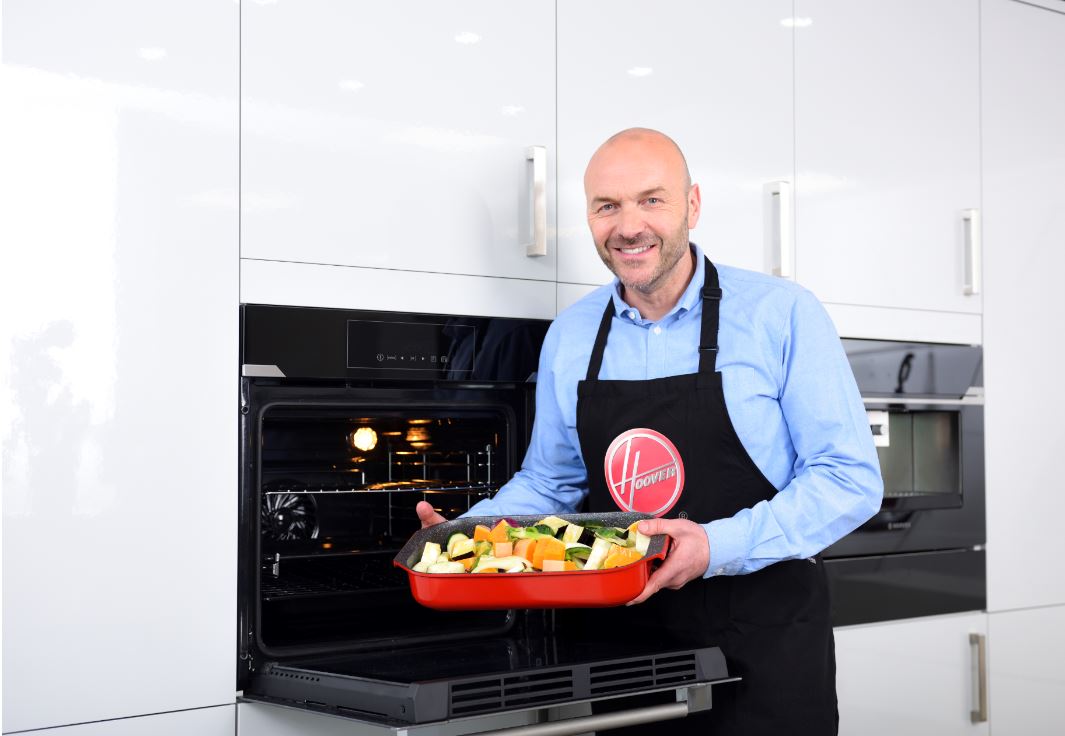 If you had one dish that brings back memories of your mum’s cooking and your childhood, what would it be?

It would have to be my mum’s lasagne. It’s just incredible. She famously used to use cottage cheese rather than white sauce which I then used in one of my cookery books and cooked on the show. I had people stopping me in the street to tell me that it was the best lasagne they had ever had.

For someone who is inexperienced in cooking, what would be your biggest culinary tip?

A lot of people who aren’t too confident with cooking try and take on too much. I would say you need to perfect one dish at a time that can then be expanded. For example, a bolognese sauce is one of the greatest things you can ever learn to make. If you regularly start making it, you know what happens with the tomato puree, what happens if you cook the onions for ten minutes rather than five, you learn how another spoonful of herbs makes a difference to the dish. Then, every time you cook, you say ‘that’s better than the last time’. You can then use it to make a lasagne, or change the spices and make a chilli. As you learn how tastes develop, you become more confident in the kitchen. I would just say, start small, be patient and then logically move out from there.

I can see you regularly share fan pictures of their home cooking. Do you aim to use your social media to encourage people to be more experimental with their cooking?

Yeah. I cook things on TV that I think are actually quite straight forward. If you just follow the recipe, then you will succeed. I get such a buzz when people cook dishes that I’ve cooked and also, I have a great platform where I can make dishes live on TV. You know, I deliberately write recipes that I think are relatively straight forward so I think it gives people confidence. It’s brilliant when people say ”right, I’m going to make this”, I think it’s fantastic.

How have you found the experience being on lockdown and what have you been up to?

I’ve got into not a bad routine. You know, I’m always an early riser, so I tend to get up at around 6 o’clock. I’ll go for a walk when it’s nice and quiet and then exercise for about 40 minutes or so. I’ll go and buy the newspaper from my little corner shop and I will genuinely sit and read it cover to cover with a cup of coffee. By then, the rest of the family start getting up. During the day, because Sunday Brunch is still going, I’m writing recipes and we are having meetings on ‘Zoom’. Even though the restaurants are shut, there are 14 other businesses to keep us busy. If I had to say the toughest part, it’s that I’m missing my mum and dad because I drive and see them on a regular basis, so I’ve been facetiming them instead. My daughter has stayed in London for University so I haven’t seen her for over 3 weeks, but I am very fortunate that all my family are healthy.

For people that may be feeling down or isolated at the moment, what are your top ‘feel good’ food suggestions?

‘Feel good’ food tends to be not the best nutritionally for you, but I think we return to our childhood food memories. Like I mentioned before, when I think of feel good food, I’d like a big plate of my mum’s lasagne. That would be delightful! The other day, my sister told me that she had a craving for fish fingers and chips which she hasn’t had for donkeys’ years! It is about understanding balance because on the one hand, you have meals that make you feel comforted and on the other side, you have ‘feel good’ food that actually makes you feel better. I think that balance is important because we are all snacking more with being stuck inside. If you realise you’re eating more unhealthily than before, you can try and have that level of balance. You can decide you want a slice of cake after your tea, but waiting until then and keeping busy in the meantime by going for a walk or cleaning your room for example. It’s good to reward yourself!

What essentials would you put in your lockdown shopping basket?

I think minced beef is great, or any sort of mince because it’s so incredibly versatile. I have been using my freezer far more than I ever did. If I was going to make a big bolognese sauce, I’d freeze other portions of it. I’ve also been buying more frozen veg which I think is great, beans, and dry herbs and spices because they can really change a dish. Take a tin of beans for example, you could put a spoonful of smoked paprika in it and then suddenly, your beans on toast feels a little bit more special. Frozen fish is also great, along with other frozen meats because people often think frozen food is rubbish. As long as they are defrosted properly, they’re all really good things to have in your freezer.

How did your partnership with Hoover come about?

With the word Hoover, we always assume it’s a vacuum cleaner but the company is much more than that. Their ambition is to create some really good kitchen products. You know, they’re well priced and incorporate some professional style techniques into home cooking. For example, they have steam ovens and dual ovens, so you can cook at two temperatures, which is quite an usual concept for domestic manufacturers. To be honest, the partnership just made sense and felt like a really good match. It goes really well with my brand you know, I’m very much your bloke next door, I’m somebody who cooks nice food on telly and tries to show relatively accessible and easy to cook meals.

Can you give us an insight into any new products you have planned with Hoover?

Everything is up in the air at the moment because we are re-working the original campaign in light of the lockdown, which was all about taking cooking into people’s homes. I am really looking forward to the more interactive stuff we have planned, but at the moment our main focus is online. Unfortunately I can’t reveal much to you because it hasn’t been confirmed yet, our meeting was only two days ago!