The most viewed meditation YouTubers

While having to stay at home at the moment is a necessity in order to save lives, doing so for a long period of time can take a toll on your mental health. This is why it is so important to find ways to keep ourselves calm and relaxed. One way to do so is by meditating, however, this can feel a bit overwhelming if you are new to it and don’t know where to start.

Experts have looked at the most viewed meditation channels on YouTube to reveal a top 10 as the nation turns to online videos for inspiration. Simultaneously, they calculated the revenues for each channel to see how much they make from using their online platform to help others relax.

Psychicworld.com gathered data using a tool created by Sellfy, which calculates estimated minimum and maximum monthly revenue they earn from ads and selling their merchandise.

The most viewed meditation YouTube channel is Soothing Relaxation, gathering almost 54 million views in just one month! Norwegian Peder B. Helland, who runs the channel and composes the music for it, has earned an estimated £683,296 in one month.

In second place is YellowBrickCinema, with approximately half the views of Soothing Relaxation – 28 million. The US channel is not only making great relaxation music for its viewers, but they have also earned an estimated £363,512 from it. 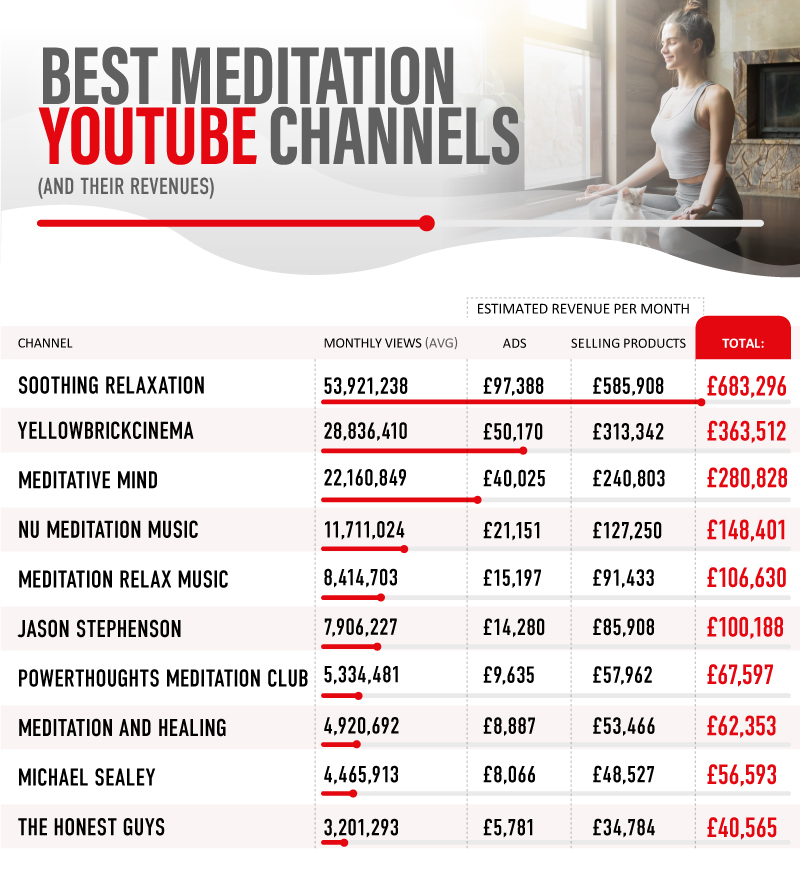 The Indian channel, Meditative Mind comes third with a whopping 22 million views and £280,828 in the bank account in one month!

The Portuguese channel Nu Meditation Music makes the top 10 list as well, situated in no.4 with almost 12 million views. Composing meditation music has earned the channel an estimated £148,401 in one month.